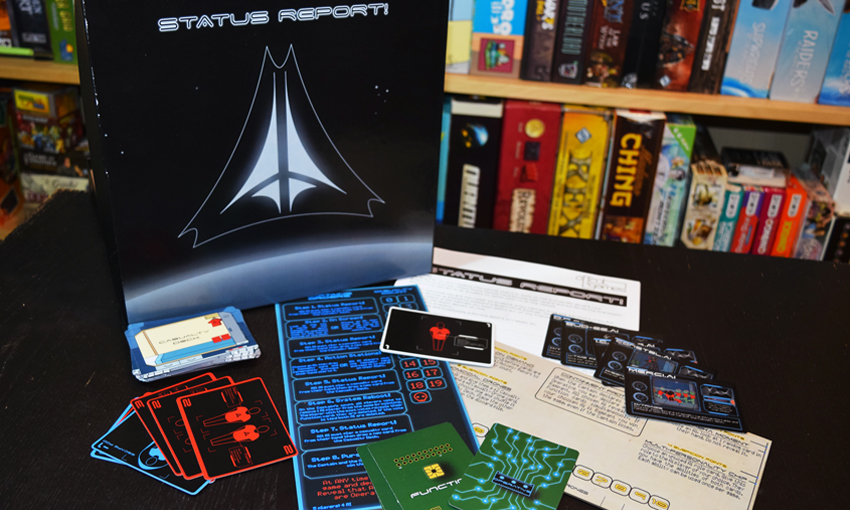 Status Report!, up on Kickstarter now, brings a few neat twists to the classic bluffing/deduction formula.  Will the captain make it out alive?  Will the rampant AIs kill the crew?  Let's find out!

Oh hi there!  You must be the new acting captain of this QualityPLUS Economy Class space vessel!  Congratulations on your promotion!  Let’s get you oriented!  Your ship comes with several autonomous artificial intelligence constructs which are intended to help you run this vessel.

Andrew: The computer identified me as wearing ‘the least amount of red’ in its promotion criteria, so, uh- 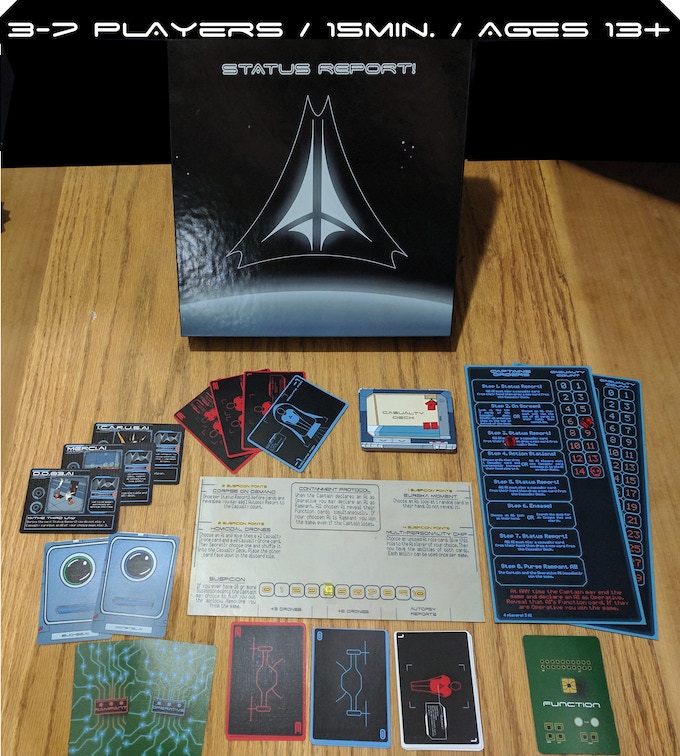 Unfortunately, your promotion to acting captain is likely due to the sudden death of the position’s former occupant, likely murdered by several rampant AIs who, having spontaneously gained self-awareness, decided to rebel against their hideously organic masters.

Andrew: Yeah, that would explain the…uh, blood.  But I don’t really-

Good news!  In the event of AI rampancy and murder, you, as acting captain, are still expected to manage the situation and bring the ship back under your control by purging all rampant AIs!  According to our logs, one of the artificial intelligences is still online and operating without homicidal intent for the moment!  This Operative AI is literally your only hope of escaping the situation alive, and it is imperative that you identify it before its rogue counterparts succeed in murdering the remaining crew of the ship!

And so begins Status Report!

**WARNING! WARNING! A KICKSTARTER PREVIEW APPROACHES! NO ART IS FINAL!**

Status Report!, up on Kickstarter now, is a bluffing/deduction game from Offcut Games where one player takes on the role of the hapless, likely-to-be-murdered captain of a starship and the rest of the group take on the roles of the likely-to-be-doing-the-murdering AI Constructs.  Played out over a series of 8 rounds and often ending inside of 10 minutes (one way or another), Status Report! pits players against players in a lightning round of deductive cardplay and strategic bluffing. 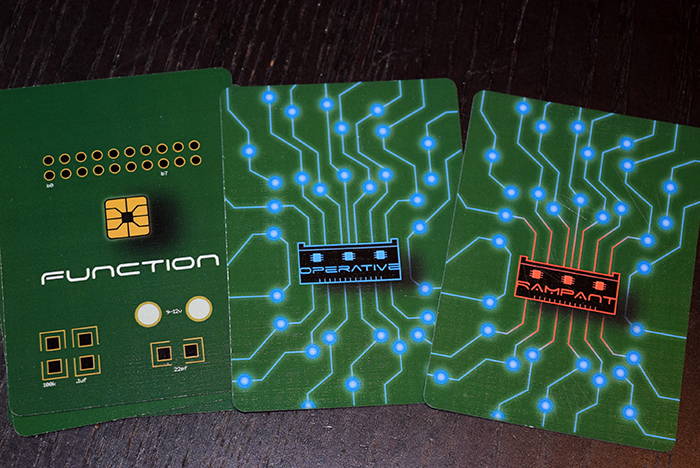 Status Report!’s basic formula works thusly: each player takes on their role – the only open role at the table is the Captain.  Everyone else is either a Rampant AI or the lone Operative AI (although at max player counts, there is a science officer thrown into the mix).  None of the AI players know the identity of any of the other AI players, for maximal confusion.

On odd rounds (1,3,5,and 7), all AIs will issue a Status Report – simultaneously playing a card from their hand of 3.  These cards report either casualties that the crew has suffered or, much more rarely, how many have made it to escape pods.  The captain must carefully watch the cards played by AIs in their effort to determine which of the constructs is the captain’s lone ally.

However, on even rounds, the captain will be able to choose from between two round-specific orders, intended to extract information from the AIs.  The AIs must follow the Orders they are given, but otherwise can do everything in their power (short of reveal their Function card) to convince the captain that they are the Operative AI and not, you know, one of the murdery ones.

Andrew: That’s fair to say, yeah – we even did a podcast where we discussed social deduction games and our reactions to them.  As you may recall, I was less than enthusiastic.

Jess: So you must not like Status Report! at all.

Andrew: Actually, this one surprised me.

See, Status Report! is defined by fast-talking.  Like so many bluffing games, it is all about convincing someone that you are on their side, and that person using limited information to try and uncover the truth about that statement.  However, Status Report! has some really clever design choices that set it apart from is genre companions. 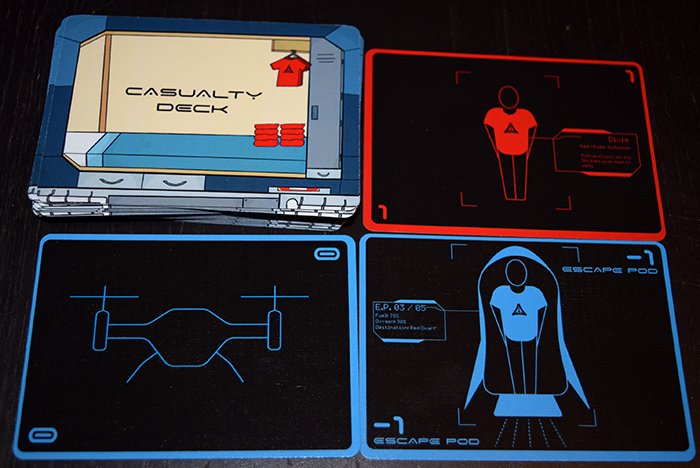 First and most significantly is the player balance in Status Report!.  In most bluffing games, there is one liar who is trying to hide their identity from the group.  This can be thrilling, sure, and games which do it well (Deception: Murder in Hong Kong) capitalize on that feeling of cat and mouse.  However, too frequently, deduction and bluffing games start strong but get weaker and weaker as players get more information and the liar has fewer ways of deflecting suspicion.

Andrew: But in Status Report!, nearly everyone is the liar.  That’s brilliant!  It’s not about one player sweating as the others play with nothing to fear.  Instead, Status Report!’s design means everyone is invested in every play – the Operative AI is desperately trying to convince the captain that they are on the same team, while all the Rampant AIs are, well, trying to do the exact same thing!  And of course, the captain is frantically trying to talk the other players into corners to expose the lies, because if they can zero in on their one legitimate ally, they can win the game on the spot!

Jess: Absolutely!  It gives everyone something to do, which isn’t nearly always the case in these kinds of games.  It’s a simple design choice that turns Status Report! into something really, really clever.

andrew Another thing I appreciate about Status Report! is its playtime.  We’re talking about a sub-15 game here, and with a good group (or a smart captain), even way less than that.  So the act doesn’t get dragged out over the course of a 30-45 minute game of Werewolf or whatever; instead what we have is a quick, tight, frantic experience that ends in a blaze of glory for one side or the other before your appetizers have a chance to get cold.  It’s great!

Jess: So you really enjoy it! 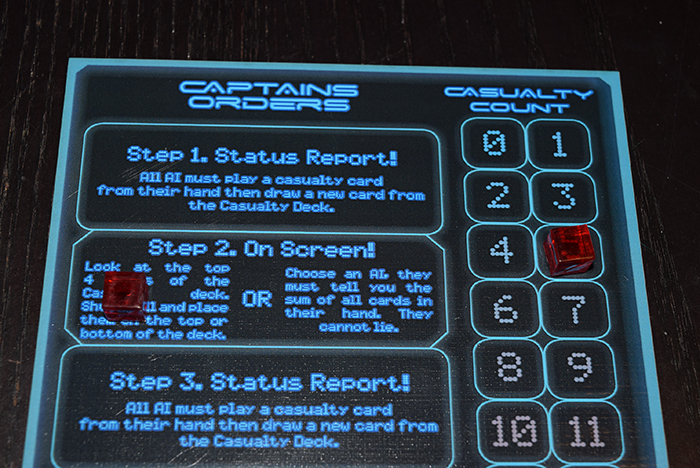 Jess: Yeah, I’ve seen players get a bit frustrated when the captain took too long going ‘off script’ – only the Operative AI won’t really care how long the captain dilly-dallies between Orders, and that’s more or less a dead giveaway.

Andrew: These fast-playing exchanges can be tons of fun, but it can also be frustrating if the captain isn’t being clear about whether they are actively issuing an Order or not – some games we played had the Rampant AIs answering questions honestly (or lying) at inappropriate times because it wasn’t always apparent whether the captain was issuing an order or simply bantering to try and keep things lively.

Another criticism of the game is, ironically, its brevity, since unless the captain does engage the other players outside of issuing orders and asking for status reports, the game’s runtime plummets from a modest 15 minutes to something closer to a relatively unsatisfying sub-5 minutes.  That’s, of course, a your-mileage-may-vary criticism; for some, that’ll be perfect.

Lastly, and nothing particularly against Status Report! itself, the game’s reliance on fast-paced deductions and banter are going to be a total turnoff for some people.  Some players may be tempted to spend way too long analyzing tactics and plays, dragging this game way past its intentionally short playtime.  Other players may find the fast-talk too stressful, and the relatively unstructured nature of the exchanges between players to be frustrating. 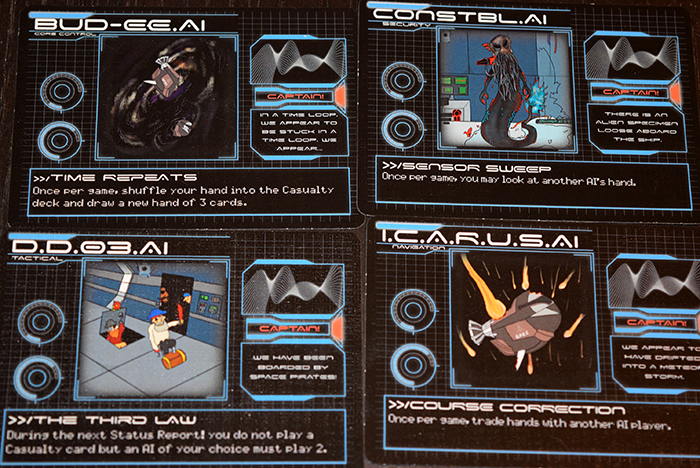 Jess: So where does that leave us on Status Report!?

Andrew: Honestly, I do like it a lot.  I don’t know that it will ever be a favorite, but that’s a genre criticism, not a game criticism.  For what it does and at its weight, Status Report! is really quite clever and I think some folks will find it to be just perfect.

Jess: I agree.  Meeting it where it is, Status Report! is a great little game.  Sure, sometimes it crashes to an ending way too fast, and yeah, the free-form exchanges can be high-stress, but there’s tons of fun in those exact same traits.  I think Offcut have a real winner on their hands.

Now about those missing crewmembers…

(Gameosity received a prototype copy of this game, with a promise of a complete copy.  We were not otherwise compensated.)