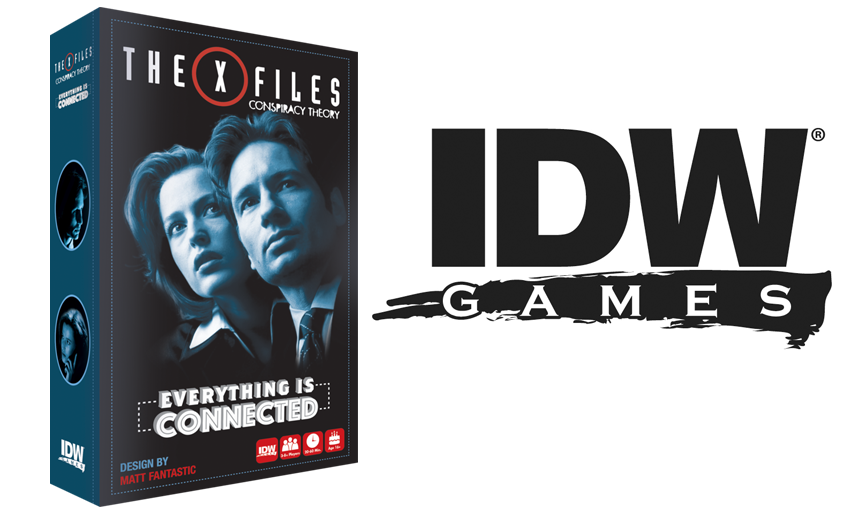 IDW Games and 20th Century FOX Consumer Products to announce a story telling party game for the X-Files. One of the longest-running science fiction series in network TV history, FBI special agents investigate unexplained and mind-bending cases known as “X-Files.” This story telling, social party game with light deduction puts players in the role to creating plausible theories using evidence at the scene to convince the other players of their case.

Designed by Matt Fantastic, designer for Dirk Gently’s Holistic Detective Agency EVERYTHING IS CONNECTED, puts players in the role of Special Agent Fox Mulder who is trying to earn the respect of the other players as FBI Directors to create a plausible theory for the case. This story telling game is built deep within the lore of X-Files, and puts players right on the scene to see if they can make the other players believe. The game also comes with a second game mode, based on Jose Chung, from one of the most famous episodes “From Outer Space”. Other player play as witnesses to a paranormal event and Jose Chung must look at all the evidence they provide and create a complete narrative that ties all their stories together.

Jerry Bennington, VP of New Product Development said “Matt Fantastic has done a great job with EVERYTHING IS CONNECTED and adapting that system for X-Files is going to create a fun experience for X-Files fans who love the show. We are happy that we can make a game that puts players right in the role of Mulder and Jose Chung for this X-Files game.”

Planned as the first game in a series based on the X-Files, X-Files: Conspiracy Theory EVERYTHING IS CONNECTED, will be available March 2018, riding along side the shows 25th Anniversary.