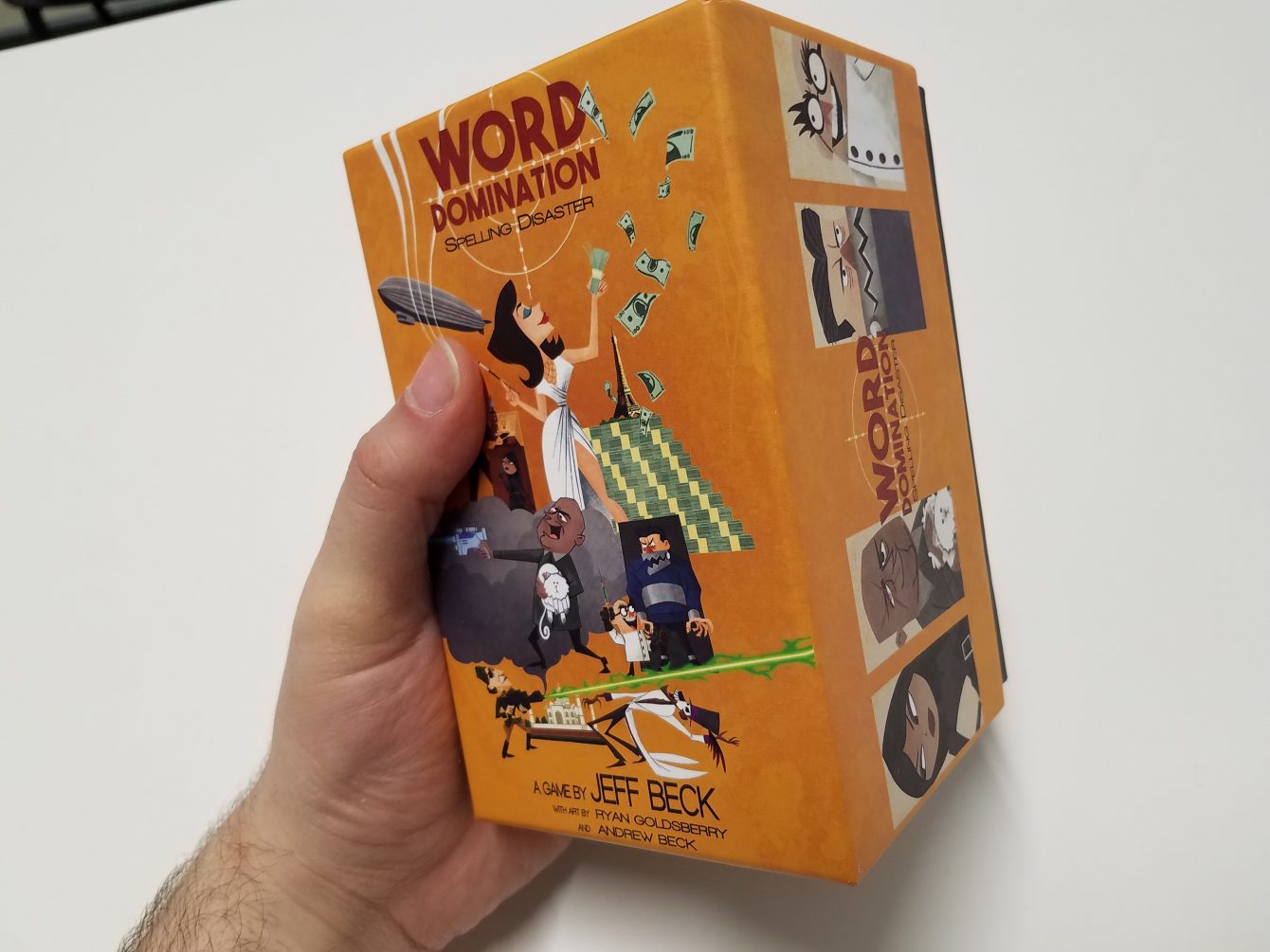 Word Domination is a really clever spelling game with a few nice twists - area control, variable player powers, and a unique letter-stealing mechanic which will have you working hard to spell not only the best words you can, but targeting specific letters for your devious heists. 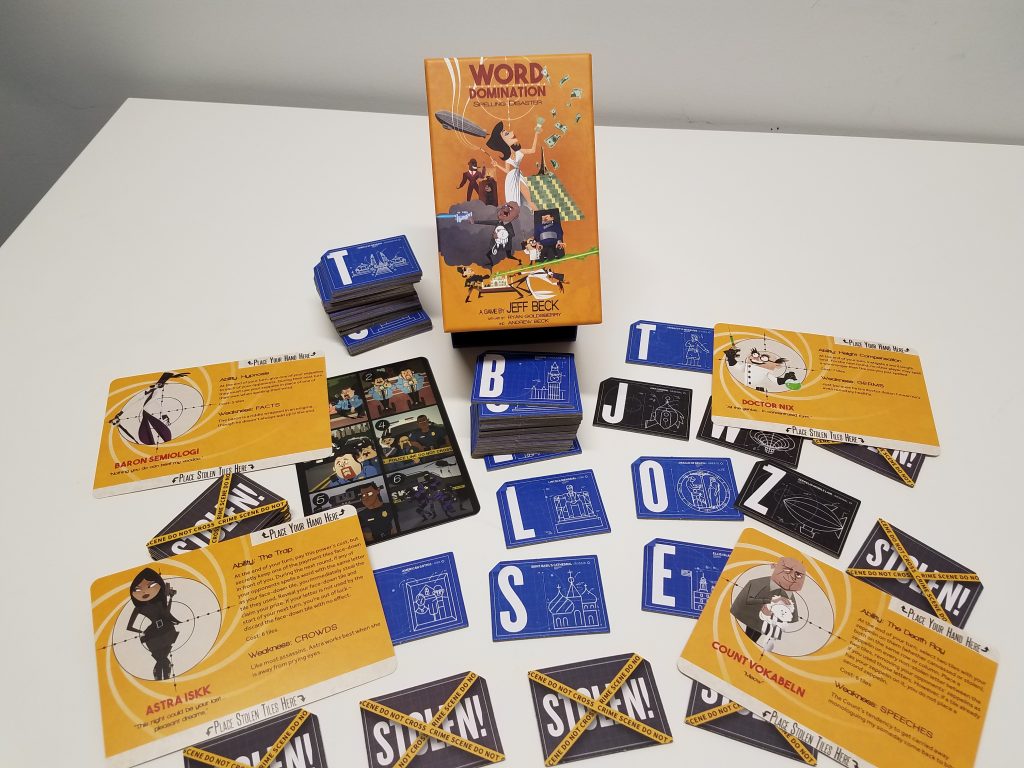 Spelling games are a classic genre, and, I admit, rarely my favorite.  Recently, there have been some real standouts (Gil Hova’s Wordsy, Tim Fowers’ Paperback, to name a couple), but for the most part, there is something just a little tiresome about them, isn’t there?  mean, how challengng s t to wrte out a…

Jess:  Then I’m afraid you’re the first victim to fall prey to my dastardly plot for Word Domination!  You see, I have stolen the letter ‘I’ and now only I may use it! 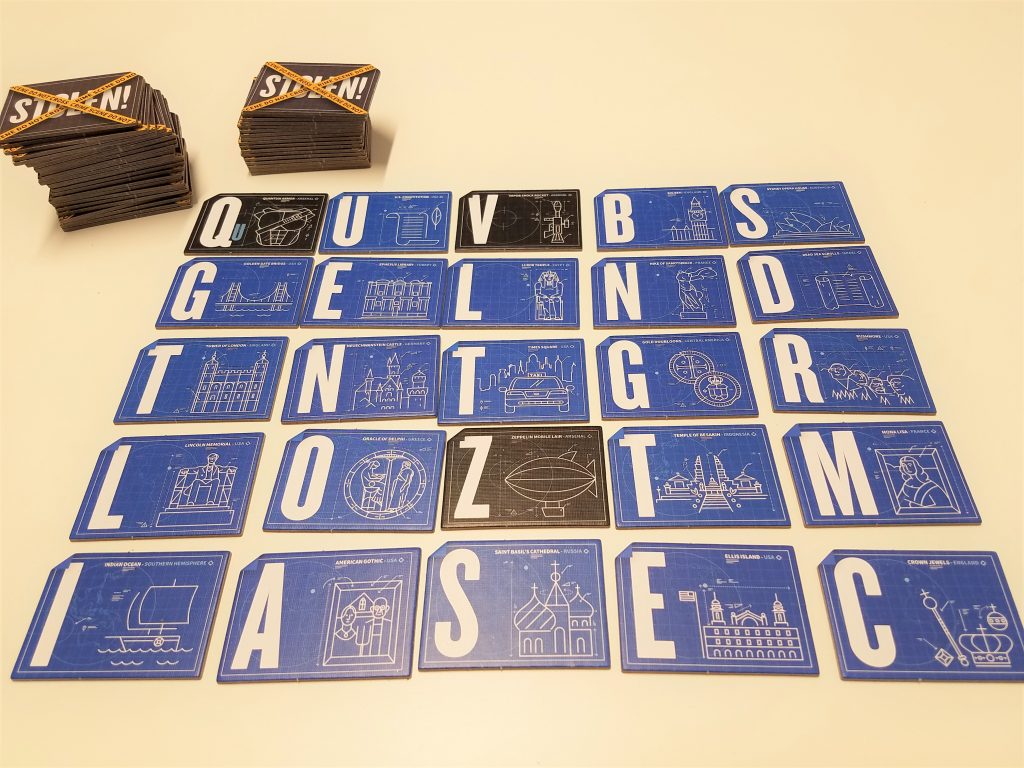 A unique hybrid of area control and spelling mechanics, Word Domination has players taking on the roles of daring villains who are steal letters (somehow) and the various treasures associated with them.  Featuring phenomenal art from Ryan Goldsberry (whose work on Paperback inspired us to put his art up around our home), Word Domination looks really neat on the table.

The game starts out with a randomly-drawn grid of tiles, each one representing both a letter and a treasure.  Each turn, players will take the following steps, in order:

Andrew:  So you’ve stolen the letter ”…that letter, eh?  Well…me can choose my words carefully, and two can play at ths game…

For each tile stolen, a player gets to place one of their markers permanently on that spot.  This will begin to create areas of the grid which each player controls, and that’s important for end-game scoring.  A game of Word Domination lasts for 6 rounds, after which players add up their points:

Andew:  Ae you statng to econsd you lfe of cme?

Not only do stolen tiles aid you in spelling words and get points, but some special tiles, called Arsenal tiles, even give you special powers which will help you pull off your dastardly deeds or block your opponents’!  Some Arsenal powers are really, really good, so you want to make sure that you upend your opponents’ attempts to get their greedy mitts on them. 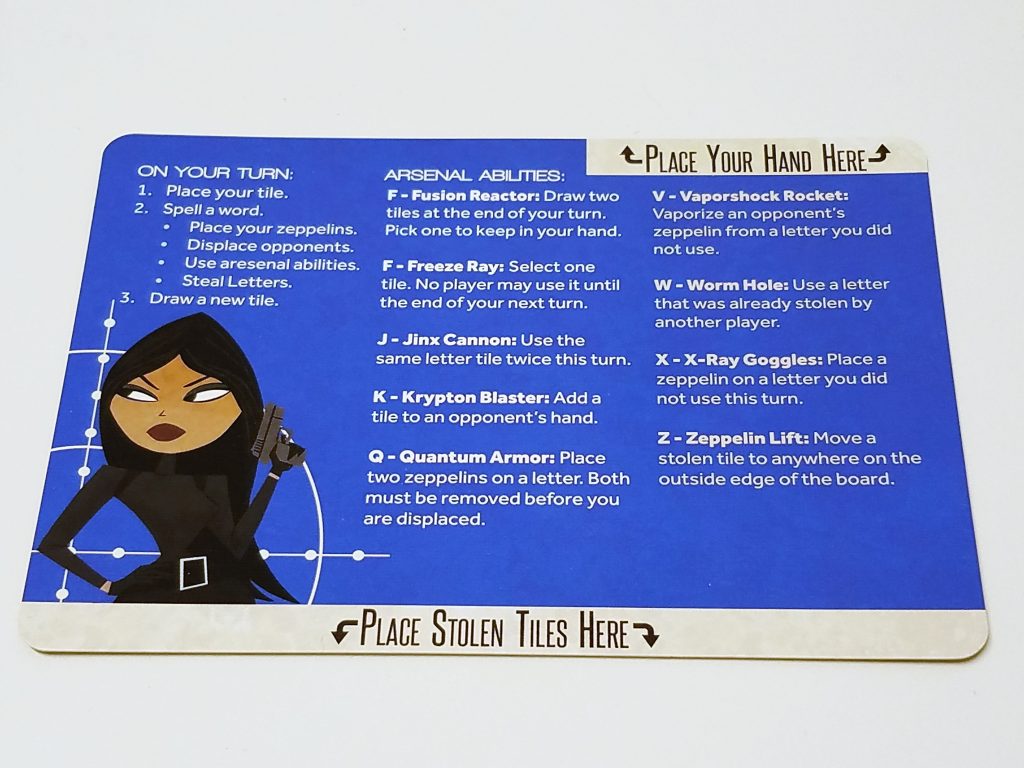 And make no mistake, upending your opponents is something you’ll definitely want to do.  Word Domination is a short game, and there’s always plenty of back and forth on controlling letters.  It’s a little bit of take-that which doesn’t go amiss given the theme and nature of the game.  But since it’s all predicated on clever use of the letters present, it all hangs together in a really great way.

But that’s not all Word Domination has up its sleeve.  Optionally, you can add villainous player powers, which come at the great cost of paying stolen tiles, but which might swing the tide in your favor.  Of course, with power comes vulnerability, and each player will also get a weakness in the form of a word whose letters they will be unable to score during the game.  There is even a cooperative variant which can be played, should you want to form a villainous super-group to steal the Eiffel Tower.

Andew:  …Me didn’ hink his hrough. 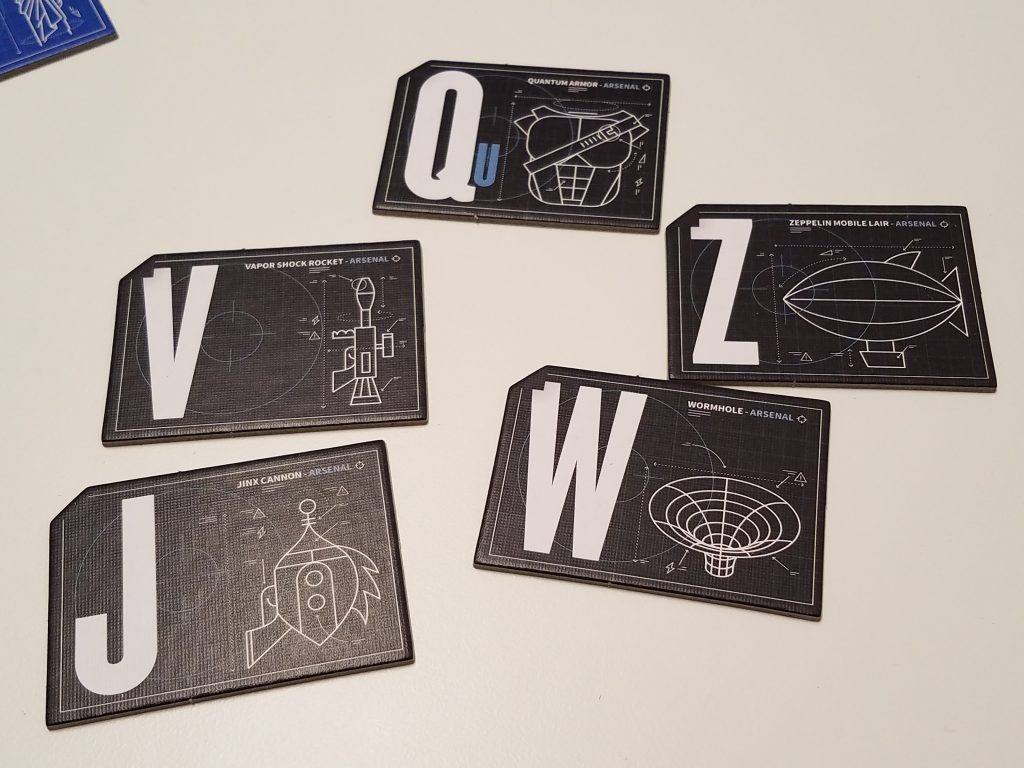 Let’s get this straight – Word Domination absolutely is a spelling game.  The theme, that of supervillains planning daring heists to steal letters, is completely tacked on, though we think it’s absolutely cool.  And the area control mechanism is of course integral to the winning of the game, but it’s got much less to do with the gameplay than the spelling component itself.

Overall, we really enjoyed Word Domination.  It’s relatively quick and accessible, and the rules don’t do much to get in the way of the puzzle of spelling the biggest word you can given the letters available to you.  The area control segment of the gameplay is a neat twist, but as we said, Word Domination is a spelling game at heart, and a really well-done one.

While some of the Arsenal tiles can feel really powerful (and it sucks when your opponent gets one or two and you don’t have the opportunity to do the same by the luck of the draw), if you’re clever with your spelling, you’ll at least make it tough for them to do so, keeping the balance of the game in a good place.

Between that, the cooperative mode, and the variable player powers, there’s just a ton of really fun game in Word Domination, and we highly recommend it for those who love to get their spelling game on!

You can order Word Domination directly from Fowers Games here!  (And grab Paperback while you’re at it!)