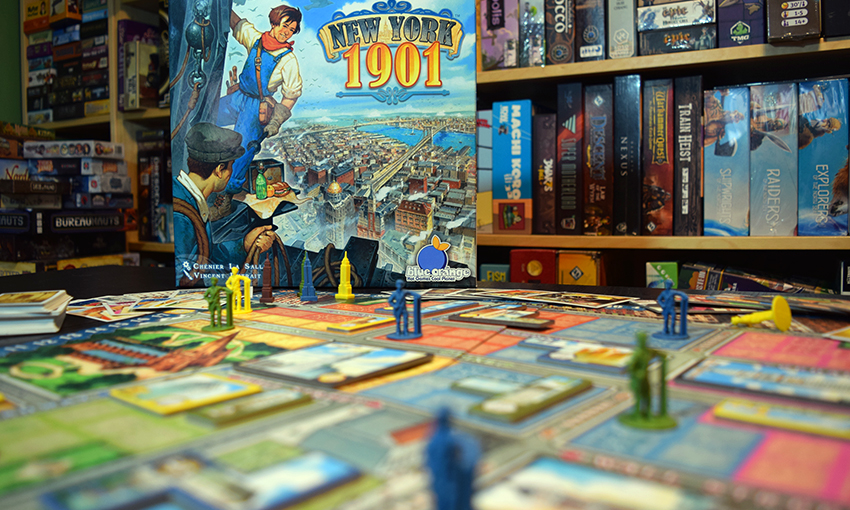 New York 1901 is an uncomplicated, beautifully presented, and lots of fun.  Though it has enough bite to be a bit more than a filler (in game length if not complexity), where it really shines is as a gateway to more complex games.

As a native New Yorker, I grew up with our iconic skyline in clear view of my bedroom window.  But the city’s fascination with massive vertical structures (made possible by Manhattan bedrock) started nearly a century before my architect father taught me the names of each of those iconic buildings.  In New York 1901, you will play as a real estate mogul, grabbing up parcels of land and raising steel to the sky as you try to out-maneuver and out-build your opponents.

Blue Orange Games has marketed New York 1901 as a ‘Family Plus’ game, indicating that it is meant to fit in a niche somewhere between the accessible fare that tends to bring a blend of young and older players to the table, and the ‘hobby’ level gamers who tend to crave deeper, more meaningful gameplay.

But can a game do so while still being engaging for everyone involved? 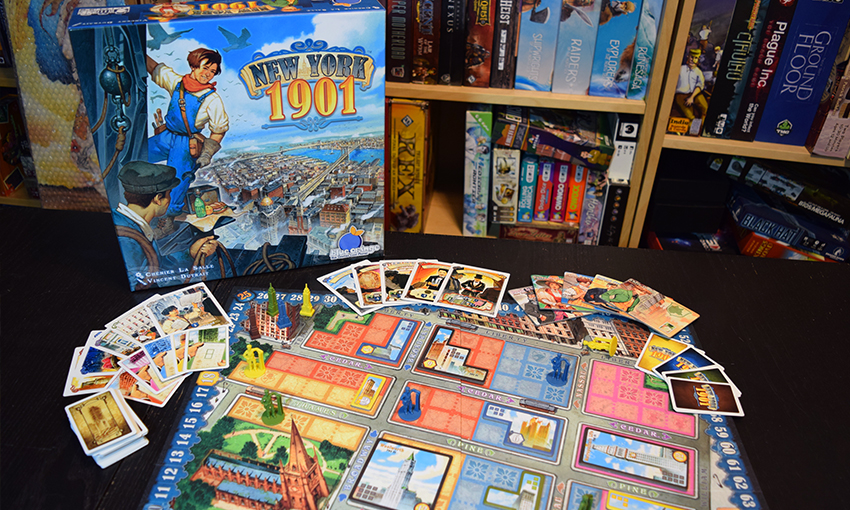 Andrew:  And what’s interesting about New York 1901 is that, upon learning it and our first playthrough, I thought it was overselling it a bit to argue that it’s anything other than a family game.

Jess:  But that’s not quite the case, right?  The fact is that New York 1901 is really what I would call a ‘gateway’ game – absolutely perfect for bridging between really light games and the heavier stuff we enjoy most.

The goal of New York 1901 is to (of course) end the game with the most points, earned by building ever-more-valuable (read: huge) skyscrapers across New York.  Each of New York 1901’s quick turns has players making an essential choice – how will they expand their influence over the city? 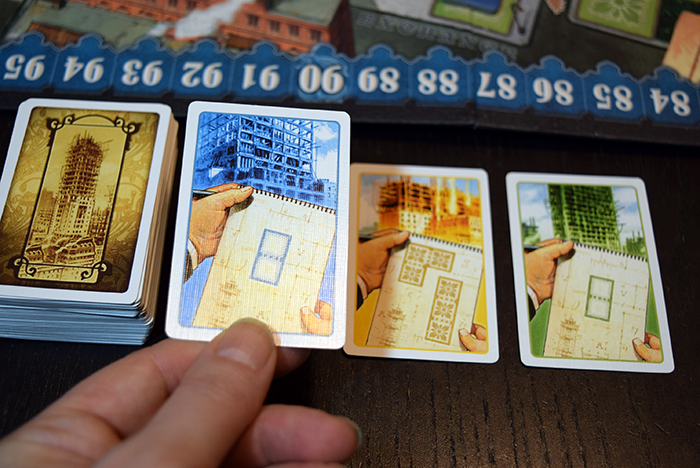 Players will choose to either expand, which has them grab one of the available territory cards, or they will demolish one of their existing structures to make room for future growth.  In either of these cases, the newly owned (or freed) territory must be claimed by one of that player’s 4 workers. 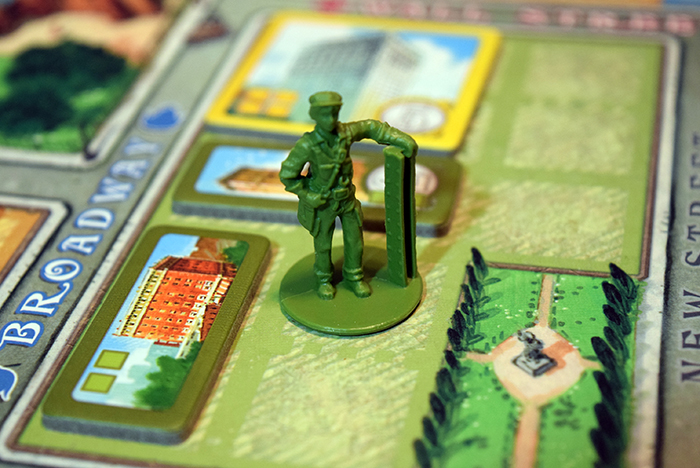 Once a player has either expanded or demolished, they may optionally build anywhere that their workers occupy.  The buildings which players erect will give them prestige points, and clever placement along key streets will also earn them points at the end of the game for area majority (which streets are valuable is randomly determined each game).

Buildings in New York 1901 are divided into bronze, silver, and gold categories.  At first, players can only build their bronze buildings, but upon reaching 6 and 18 points, they unlock the other categories for construction. 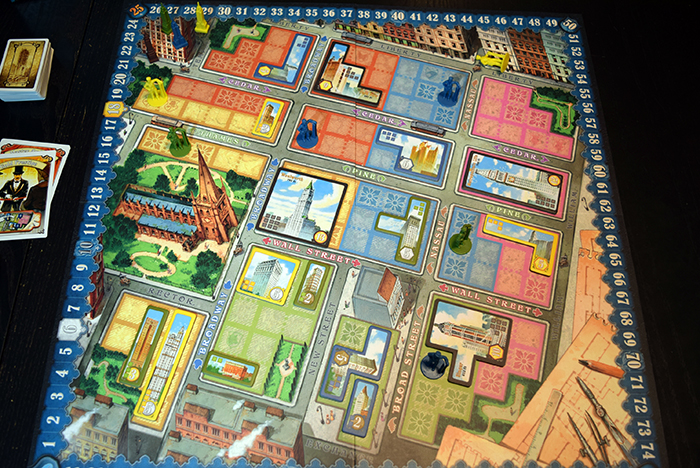 Another way to earn points are from the three randomly selected bonus objective cards, which players can work towards over the course of the game.  Once either the territory draw deck is exhausted or one player has built all but three buildings, the round finishes and final points are tallied

Andrew:  And that’s it, really.  New York 1901 doesn’t exactly pack a whole lot of mechanics into its beautifully-illustrated box. 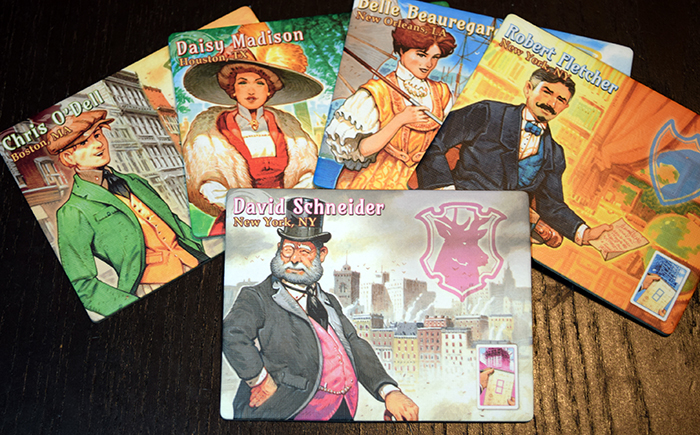 Jess:  For sure – all you really need to do to get started on earning points is to grab some plots of land and slap some buildings down.  Easy, right?  Too easy, maybe?

Andrew:  Well, the thing I love about New York 1901, the thing that makes it so incredibly playable, is that it strikes a good balance between planning and execution.  Each turn is really a setup for the next one – are you grabbing a lot that connects to one of your own, in preparation for dropping a big building?  Maybe you’re snagging prime real estate along one of the key streets to secure some area majority points at the end.  Or perhaps you’re blocking what you know is going to be a huge expansion for your opponent, screwing up their plans spectacularly.  Or maybe you’re just dropping a smaller building in place now, with plans on a big upgrade in the future. 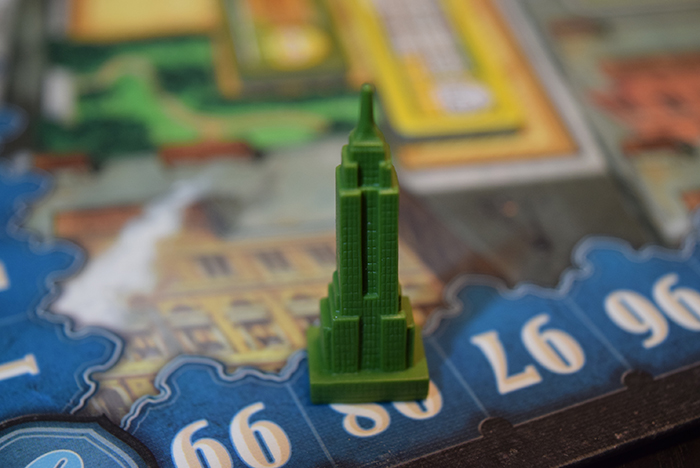 Jess:  Absolutely!  But because New York 1901 does all that with really limited per-turn actions, it remains accessible for players of any skill level.  At first glance, all you’re doing is taking a card and maybe dropping a building on the board.  But New York 1901 packs some surprises underneath it’s family-friendly veneer and amazing Vincent Dutrait art.

The first of these surprises comes in the form of some potentially very aggressive gameplay.  What became immediately apparent to us as we sunk into our playtesting is that, if the players want it to be the case, New York 1901 can have some teeth.  If you telegraph your intentions too clearly, another player might be able to absolutely shank you by grabbing a parcel of land right in the middle of what you thought was going to be your biggest, shiniest building yet.

Andrew:  And that totally keeps in theme with the time period, interestingly enough.  Buying some land so that someone else couldn’t develop is a classic (if completely jerky) real estate mogul power-play.

Jess:  Doing it in New York 1901 makes you feel like a mustachioed villain, cackling manically as your opponent looks on in abject frustration as you plunk down a worker you have no intent on ever moving.  Sure, that leaves you with one fewer worker with which to plan your own actions, but it might just be worth it to make sure that your opponent doesn’t get a mountain of points. 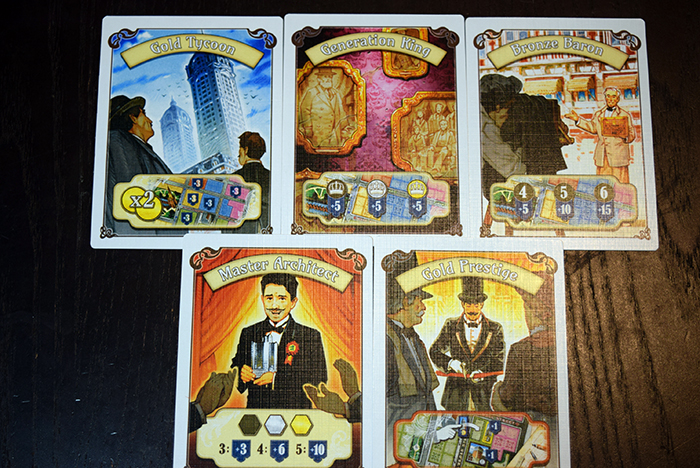 Andrew:  Another thing that surprised me was how the whole ‘bronze/silver/gold’ building gating system changed the game.  At first I thought it was a tacked-on limit, meant to stop runaway leads.  What it instead does is it makes your first few plays even more strategic – do you go for a lot of small plots first, trying to tech up to your silver buildings?  Or do you spend those first few plays building up clusters of plots, hoping to secure land early on, before all the good locales are snapped up. 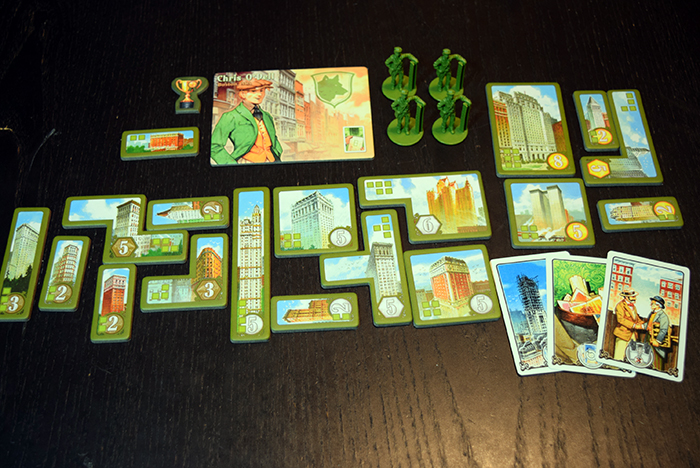 Jess:  Yup, and since demolishing a building doesn’t cost you points, it takes the agony out of your first placements – New York 1901 encourages you to get on the board and start scoring, and that’s cool.  Each placement feels satisfying in its own right, and when you demolish some bronze buildings and drop a gold in its place, well, that’s like a victory all its own.

We also like how New York 1901 scales painlessly for 2 players.  The only thing which changes is that the pink district gets eliminated from the game.  That does a good job of tightening things up enough that you’re at least more likely (though never forced) to vie for the same territories. 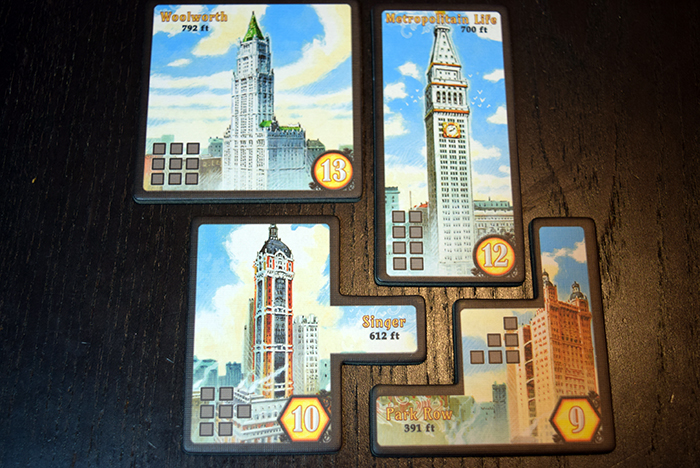 Above all else, New York 1901 feels like a game built not just for families, but for newer gamers.  While we enjoyed it plenty, our favorite application of New York 1901 was as a way to warm up folks who didn’t necessarily have lots of gaming experience.  Comparisons could be made to games like Ticket to Ride and Carcassonne, with regard to the teaching-to-playing ratio, and we mean that in the best way.

Overall, we had a great time with New York 1901, and think it’s a fantastic gateway game for any group of players!