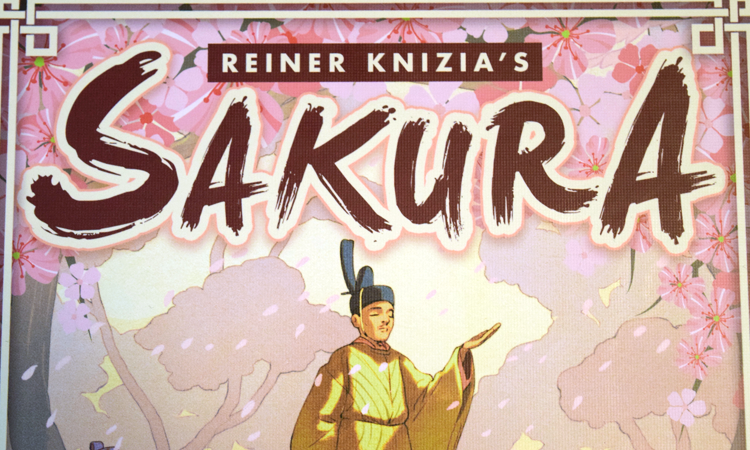 As beautiful as it is mechanically simple, Sakura is an abstract game that we really enjoy...as long as you're ok with a good bit of chaos mixed into your strategy.

There’s a certain beauty in austerity.  Simplicity of design can, occasionally, reveal a sort of brilliance which mechanical complexity can sometimes obscure or even destroy.  Certainly, that concept is at the heart of abstract game design – that with less comes more.  We at Gameosity are big fans of well-tuned abstract games (we did a whole list of great ones here!), but we’re also suckers for beautiful games.

Jess:  Well, good news for us then, because Sakura is definitely both! 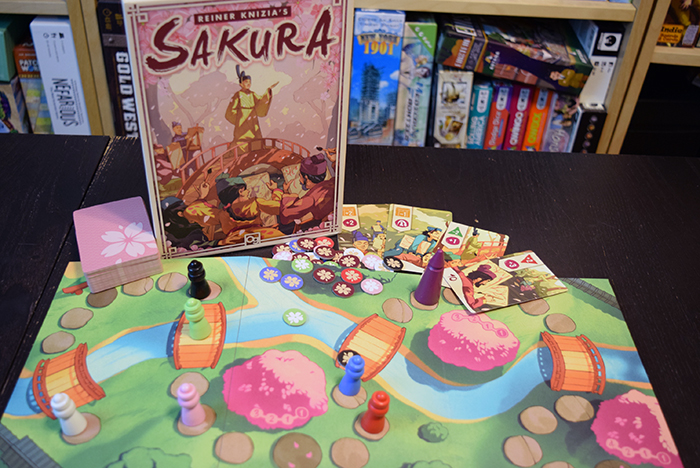 Published by Osprey Games (Star Cartel, Escape from Colditz), Sakura is as delightful in its presentation as it is simple in its mechanics.  The paper-thin premise is that we are artists, following the Emperor as he strolls through the imperial gardens during the blooming of the cherry blossoms (those titular sakura trees).

Each of us is attempting to capture the Emperor’s likeness best.  Our drive for artistic inspiration means we are all trying to be the artist closest to his imperial highness without ever actually bumping into him (which would cause all sorts of problems with security, at the very minimum). 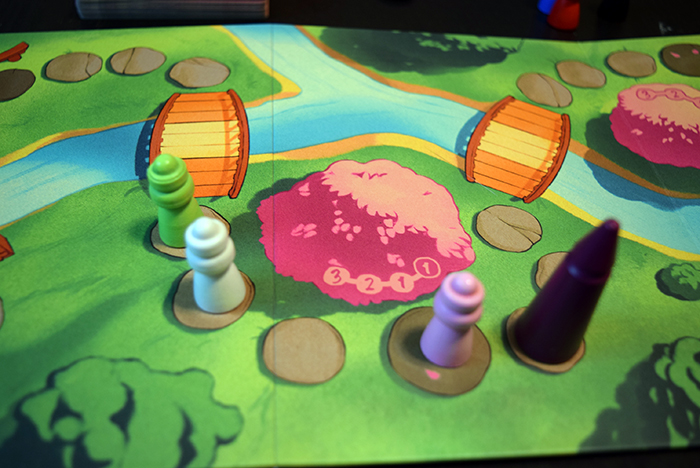 Each turn, players will select from their hand of cards one card to play.  When everyone has made their selection, cards are simultaneously revealed and resolved in order from lowest number to highest.  Each card has 2 actions on it, which all relate to moving either the players, the Emperor, or both, along the garden path.

Jess:  Like we said, it’s important not to actually bump into the Emperor, since doing so will get you pushed back, lost points, and a stern, disapproving look!

Critical to this endeavor is the fact that some cards move the player who played them, while others move the player in some relative position to the Emperor (furthest from him, closest too him, etc.), as well as the fact that there are cards which move pawns backward as well as forward.  Careful planning is necessary to get yourself into an optimal position (or to crash your opponents into the Emperor), but one never knows how another player’s cards might affect them… 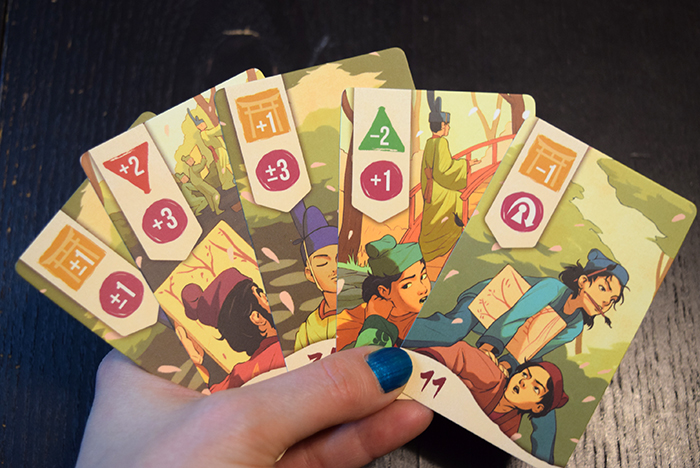 At three points along the path, the Emperor will arrive at sakura trees and will pause to contemplate their beauty.  These trigger scoring, with players getting more points for their position relative to the Emperor.  After the final round of scoring, players tally their earnings and a winner is declared.

Andrew:  What I like about Sakura is the simplicity of it all.  The gamble each turn, of how your action card will play out, is a simple puzzle complicated by the fact that you can’t predict what the other players will do.

Jess:  For real.  It’s not at all uncommon (for example) for you to play a card that will move the lead player ahead (hoping to bump that artist into the Emperor), only to find that someone else’s card has moved you into the lead, and well, you know what happens next.

Andrew:  Yeah, for sure.  And that delightful chaos amplifies pretty dramatically at higher player counts.  At 6, honestly, you’re basically flinging your cards into the unknown, hoping that things play out in your favor. 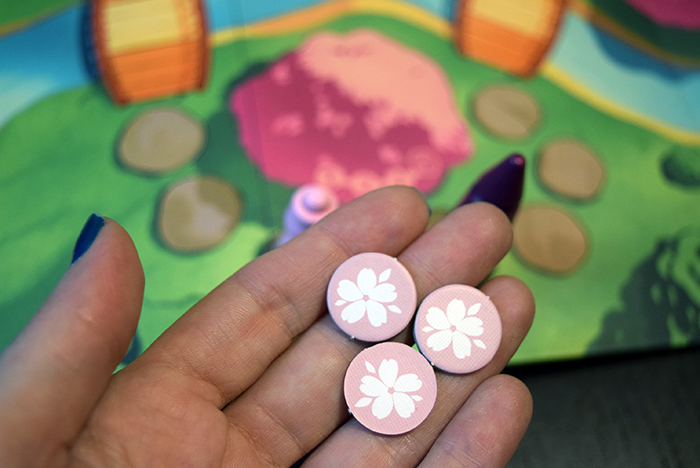 And that’s a really important thing to know about Sakura – the player count is the game experience sliding scale, ranging between ‘light tactical’ to ‘holy hell, how did we end up here?’.  At 2 players, a phantom 3rd artist adds some complication to the game, but for the most part, players can plan for their own actions.

Jess:  Normally we don’t like games that add an automated 3rd player, but Sakura pulls it off fine – there’s basically no overhead to manage and the randomness it adds keeps the experience within the spirit of the game.

Jess:  And pretty!  Osprey’s usual polish is present, and the art is fantastic!  The board looks great, too, and even does a good job of subtly hiding the extra spaces which get used in 5/6 player games but omitted at lower counts (they’re the dark spaces on the bridges). 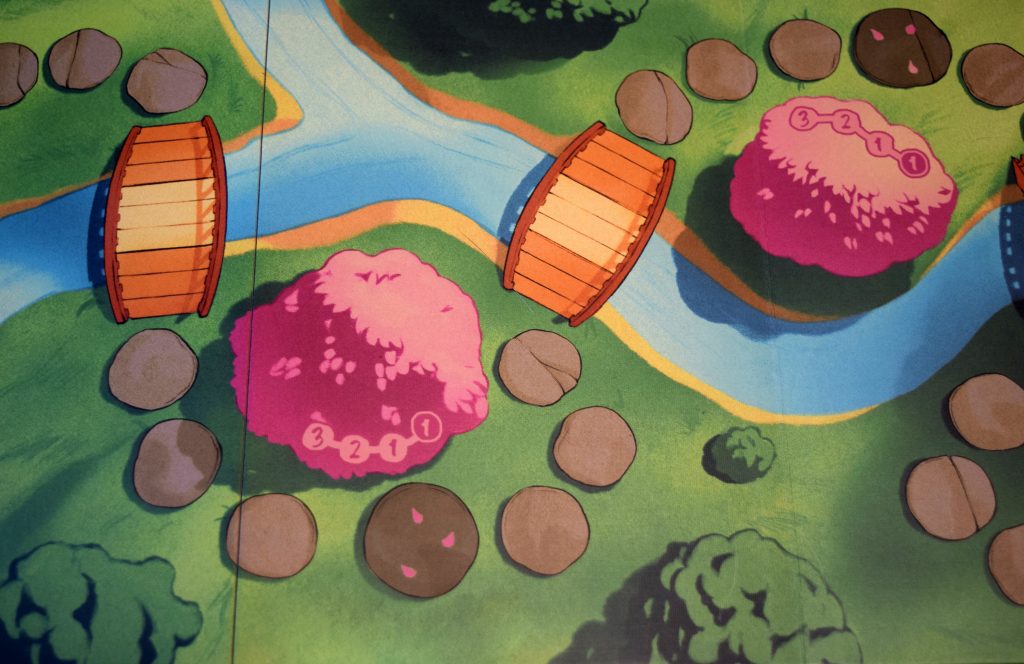 Andrew:  Absolutely, yes.  My only complaint about the components in Sakura are the cards themselves.  Maybe it’s because this is the first print run, but the finish on them felt oddly unfriendly.  I’m hoping that once they get worn in a bit it’ll go away, but it’s the one mark against the physical production of an otherwise gorgeous game.

For as much as we enjoyed Sakura, it’s important to take the game from where it comes.  It will look as good on your table as it does on your shelf (Osprey’s typical ‘book’ style game box strikes again, to great effect), but don’t pull it out expecting depth of play. 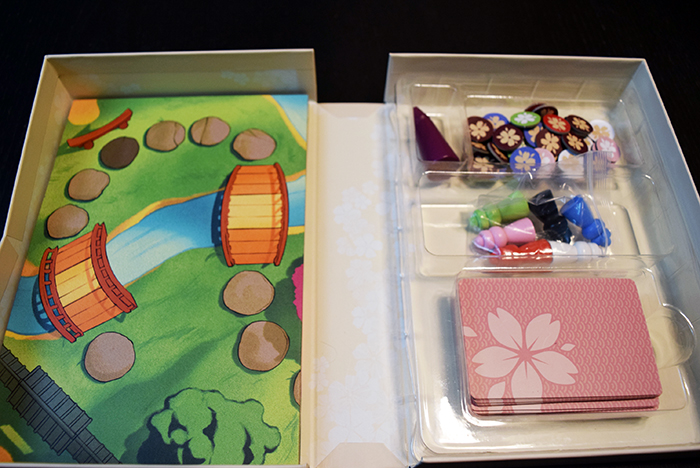 Andrew:  I’m reminded of another game with a similar mechanical premise, called Gravwell.  In that, you’re flinging your spaceship out of a black hole or something, using cards to move either forward or back, etc.  The gimmick there is that your movement is always relative to the nearest other player, which upped the chaos considerably.

Jess:  I remember that, and I thought it was pretty messy.

Andrew:  It was.  While there are plenty of folks who like Gravwell, it just wasn’t for me.  But Sakura, while somewhat mechanically similar, is much more my speed.  Sure, there’s chaos here, but it’s a fun sort of mess which doesn’t overstay its welcome one bit.  And it’s nice to look at, which doesn’t hurt its case at all.

From its gameplay to its presentation, we found a lot to enjoy in Sakura.  If this manic, gorgeous good time sounds like your speed, you can order Sakura directly from Osprey Games here!