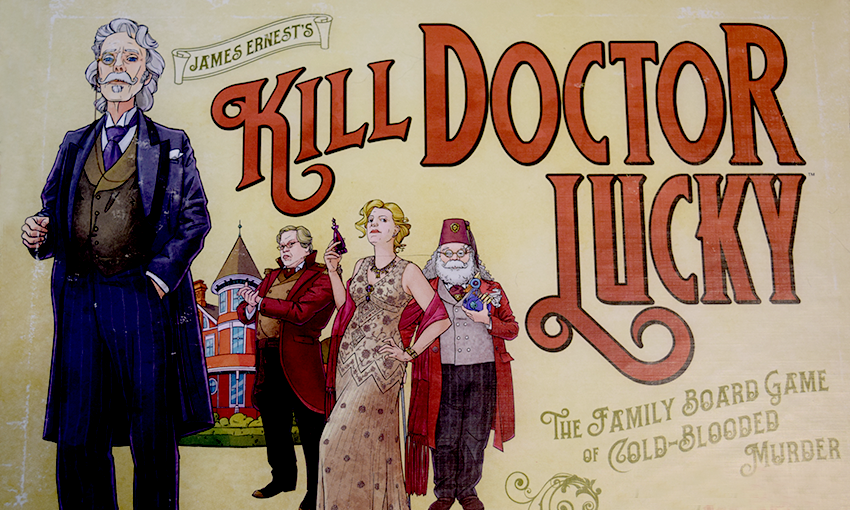 Kill Doctor Lucky 19.5 Anniversary Edition brings this classic-feeling board game to the modern table with style.  And the Mansion That is Haunted expansion board adds just a little twist for players who can't get enough of murdering the titular doctor.

Jess:  Wow, wasting no time getting to the good stuff, eh? 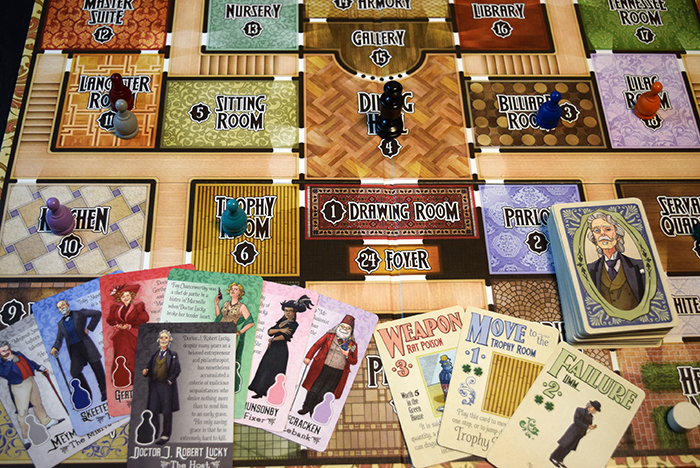 Well, attempted murder, for the most part.  At first glance, Kill Doctor Lucky may have some elements in common with another classic game from many of our collective childhoods – you know the one I’m talking about: big mansion, eclectic group of guests, murdered host, etc.

However, in a wonderful twist, Kill Doctor Lucky isn’t about figuring out who murdered the titular (and incredibly aptly named) Doctor Lucky – rather, it’s about who can figure out how to get away with being the one who murders him! 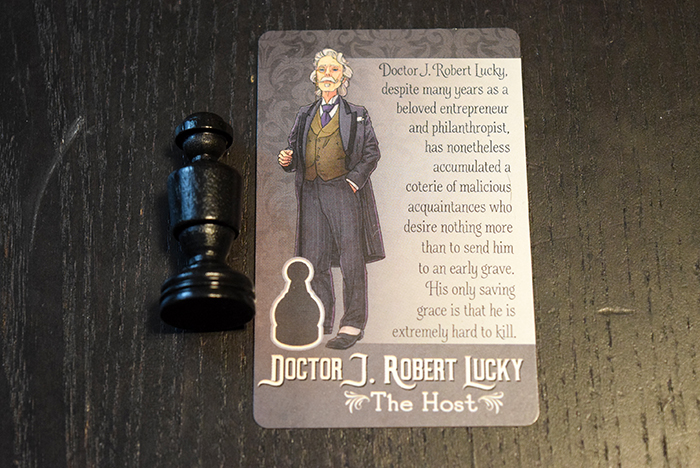 Jess:  We did a preview for Kill Doctor Lucky when Cheapass Games was Kickstarting its 19.5 year Anniversary Edition.  What we have here is that version, plus a little something extra we’ll get to in a bit. 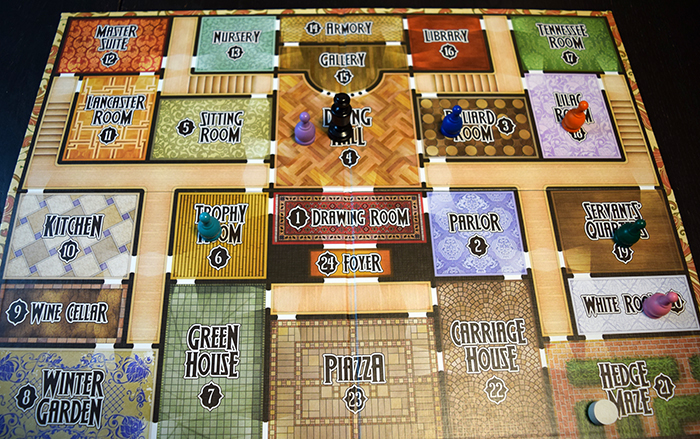 The core concept behind Kill Doctor Lucky is razor-simple – be the player who manages to, well, kill Doctor Lucky.  The first step in doing so will be to corner the good doctor alone in one of the rooms of his luxurious mansion, through which Doctor Lucky will amble about in a set pattern throughout the course of the game.

Josh:  And when we say alone, we mean alone – if any players are even in line of sight, you won’t be able to do the deed.

Andrew:  Who would have guessed that killers would have stage fright?

Once isolated, killing Doctor Lucky is as easy as finding some object at hand (or possibly just using your hands), and finishing him off…except, well, Doctor Lucky has luck (and the other players) on his side.  When one player attempts to finish Lucky off, it is the rest of the players who must stymie that effort, playing cards from their hand in Lucky’s defense. 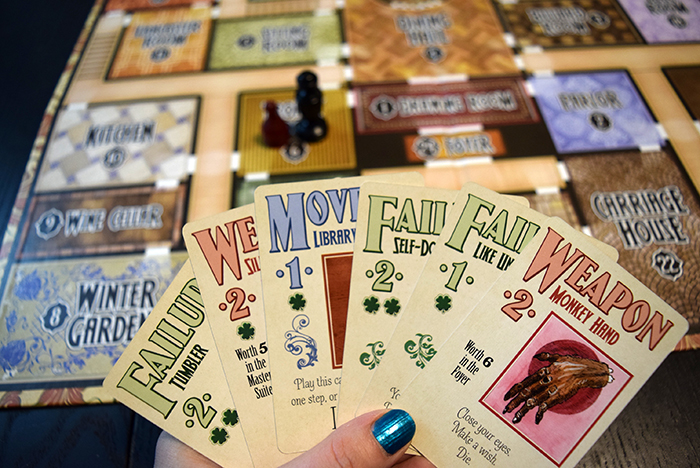 Jess:  Finally!  I’ve got this guy alone!  Doctor Lucky, you’ve got a date with this Monkey Hand!  And since I’m murdering Doctor Lucky in the foyer, it’s got a huge bonus!

Josh:  Not so fast! I think you’ll find that you’re plagued with self-doubt!

Andrew:  And I’m afraid you’ve taken a bit of a tumble, luckily for Doctor Lucky. 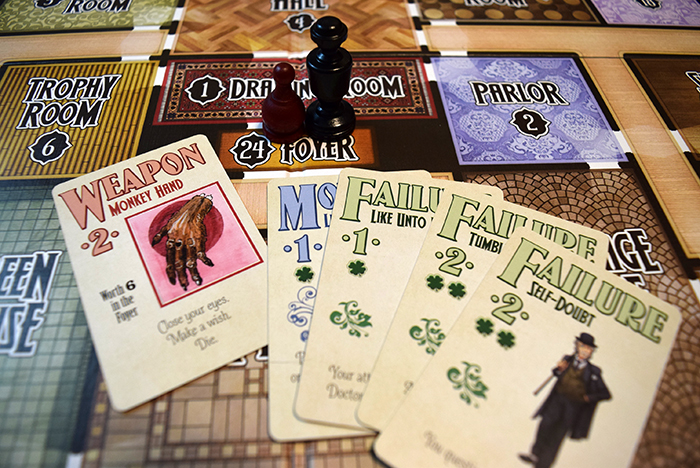 But eventually, of course, the doctor’s luck will run out.  Each failed attempted murder adds fervor (and bonuses) to players’ efforts, and when one finally succeeds, they’re the winner.

Jess:  In its most basic form, Kill Doctor Lucky is a neat little positional puzzle – you need to be aware of where Lucky is headed, as well as the sight-lines of your opponents.  It gets way trickier in bigger games, but for fewer players, you close off wings of the manor to keep everyone corralled in. 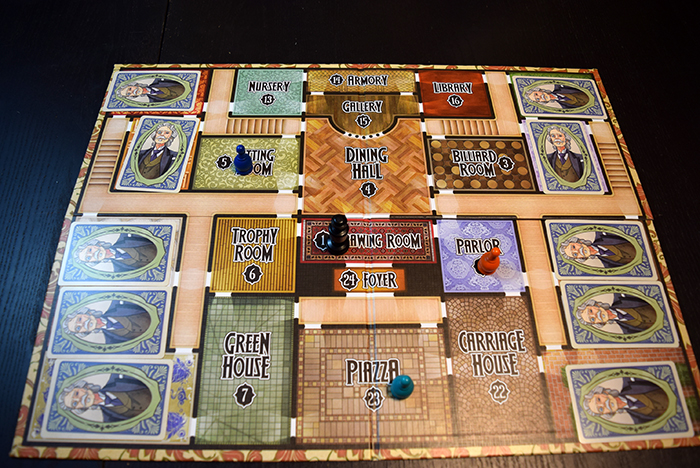 Josh:  Me too!  I also like how you need to burn cards for almost everything – bonus to murder, defending Lucky, even moving faster around the mansion.  Cards are the only resource players get in the game, and managing where and how you spend them is a big part of the strategy.

Andrew:  I agree with you both.  I also really like this particular printing of Kill Doctor Lucky – I find the simple pawns and the really nicely illustrated board to look somehow both modern and classic. 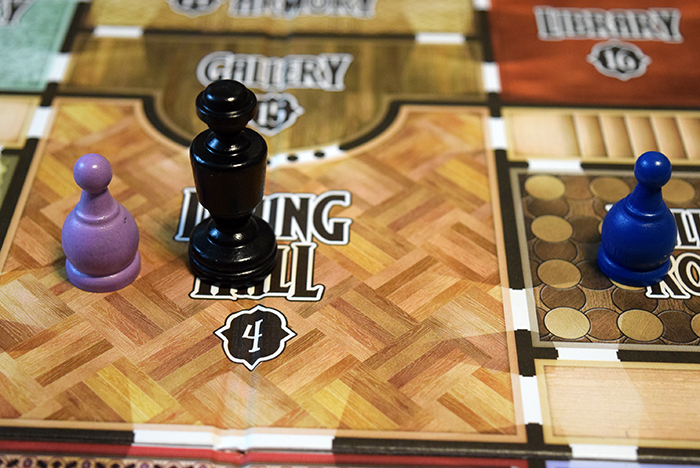 As we mentioned, this is the 19.5 Anniversary Edition printing of Kill Doctor Lucky, and as such, it has a few variants thrown right into the box to keep things interesting.  The first and largest is the alternate board on the back of the main one.  Doctor Lucky’s Bed & Breakfast is larger than his mansion (for some reason), and features a new layout for your marauding would-be assassins to stalk. 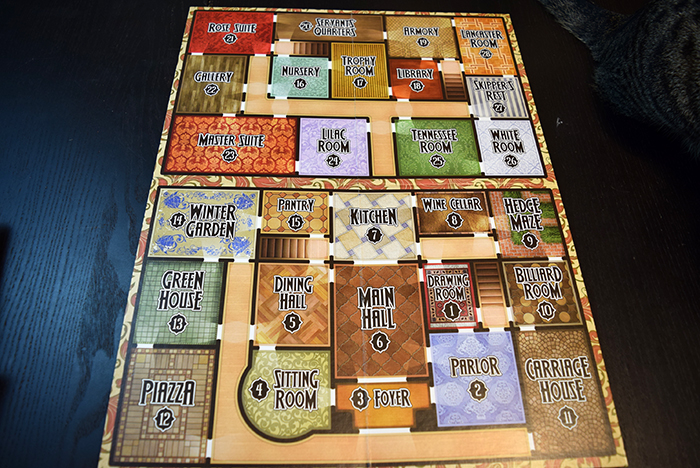 Another included variant is the introduction of the pets.  The Doctor’s dog, Shamrock (of course) can be moved about the manor by the players, and the loyal pupper looks to keep Lucky and his possessions safe – you can’t draw cards or attempt murder if Shamrock can see you.

Josh:  Nobody likes a snitch, Shamrock…

The other pet is the doctor’s cat, Patience.  Patience can also be moved by players, and is so distractingly adorable that anyone in the room with it can’t see out of that room.

Jess:  Which is reasonable, because when there’s an adorable kitty, why would you be looking anywhere else? 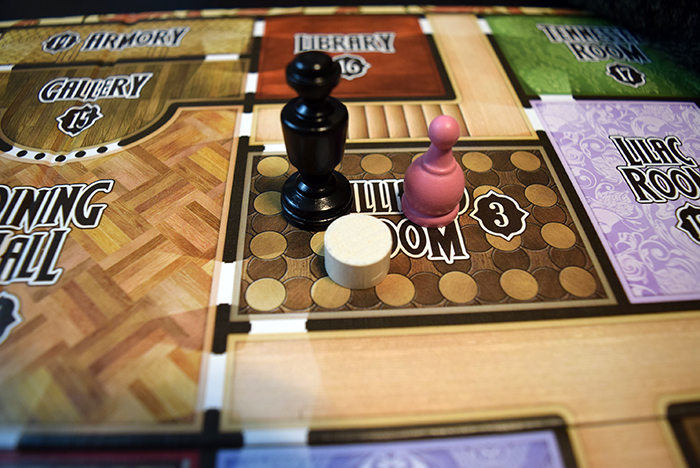 The final variant, escape from Lucky Mansion, is goofy even for such a goofy game.  Triggered immediately after someone murders Doctor Lucky in the main game, this variant sees the good doctor arise as a flesh-craving zombie who now stalks and devours the players, with the last one left alive as the new winner.

Andrew:  I like the variants well enough – as the rules point out, adding the pets is a good way of adding just a little complexity to this fairly straightforward game 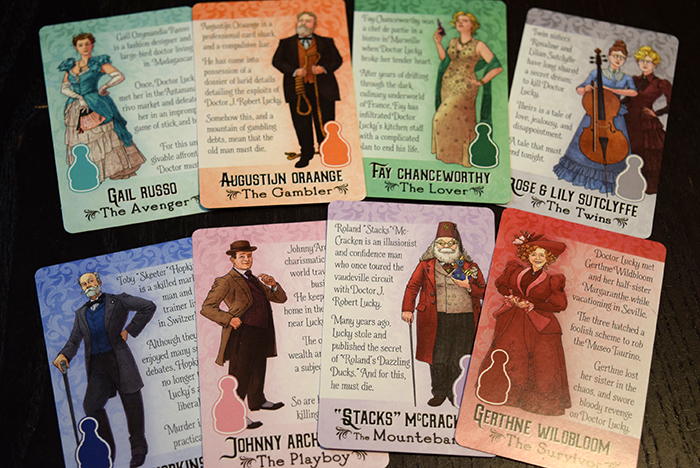 Josh:  Escape from Lucky Mansion is a silly little variant, but I think it’s neat that it triggers right after the main game ends, so that starting positions, etc. are always going to be random.

Andrew:  Well, if you like the idea of random horror elements thrown in with your Doctor Lucky experience, then look no further than the Doctor Lucky’s Mansion That is Haunted expansion board! 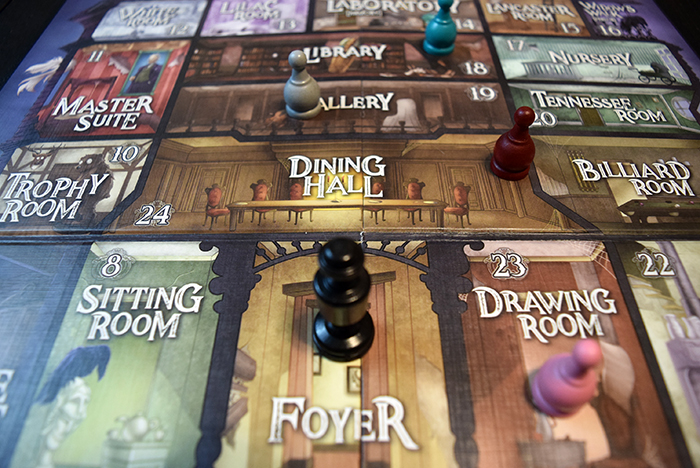 Jess:  That’s quite a mouthful.  Why not just ‘Doctor Lucky’s Haunted Mans-‘

Andrew:  AH AH AH, that thing you were about to say is quite copyrighted.

In Mansion That is Haunted, the players are ghosts who are still trying to murder Doctor Lucky (what is it with this guy, anyway?).  The new board layout features portals for fast travel, and the ghosts themselves can move through walls but can only see in a short radius.  It changes up the Kill Doctor Lucky core just a little bit, and for folks who really like the base game, they might appreciate the simple variant it adds. 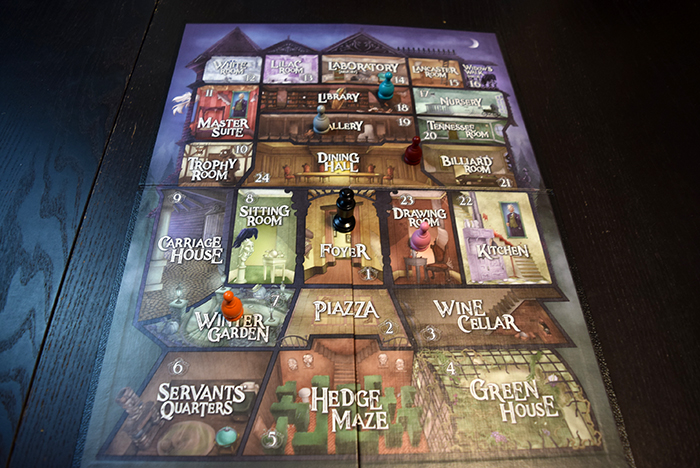 Overall, we like Kill Doctor Lucky quite a bit.  In feel, it hearkens back a bit to older games (and no wonder, what with it being about 2 decades old), but it’s still playable and fun.  While it may not be the deep strategic experience modern boardgamers have come to expect and enjoy, this well-presented bit of murder features clean design and a nice aesthetic to boot.