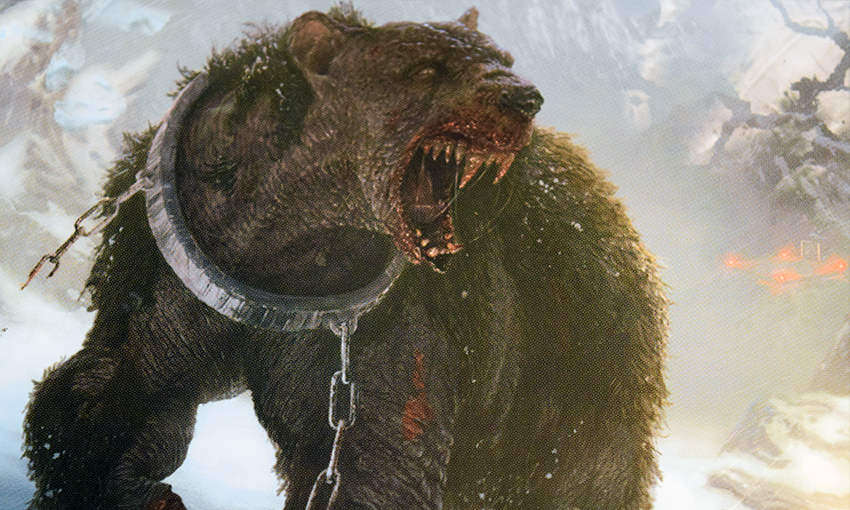 Outpost: Siberia is a mean game about a team of scientists trying to survive winter in the tundra.  While there are some really clever elements at play here, ultimately, we found it to be too tough to casually enjoy.

We’ve said it before – we (generally) love a good cooperative game around here.  And most cooperative games are downright mean – Pandemic sometimes just aims its boot at your throat and stomps, Ghost Stories can feel like drowning, and The Lost Expedition…::shudder::

Andrew:  So, it’s no big barrier of entry for us when we say that a co-op game is challenging – that goes with the territory, and we actually love that!  The challenge is often the good part.

Jess:  But when it comes to Outpost: Siberia from IDW, well, this might be a case of too much of a good thing. 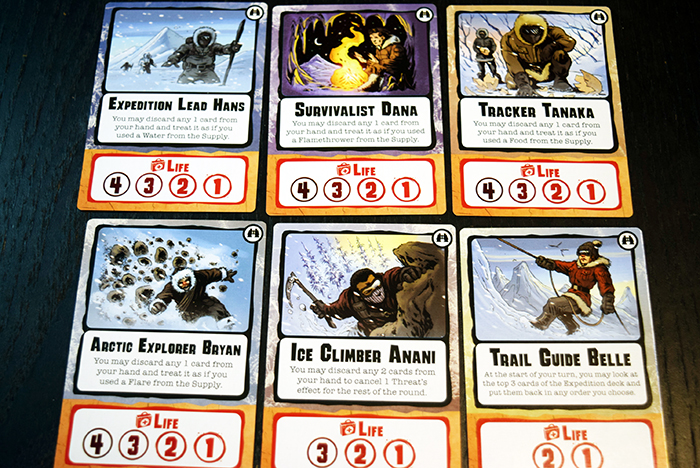 Outpost: Siberia is a small-box card game, where the players must work together to endure being trapped in a research facility in the Siberian tundra.  As your team of scientists and explorers grinds their way through the encounter deck, they will scavenge for supplies, fight off hungry predators, and desperately try to stay fed and warm.

This is unlikely to work out in their favor. 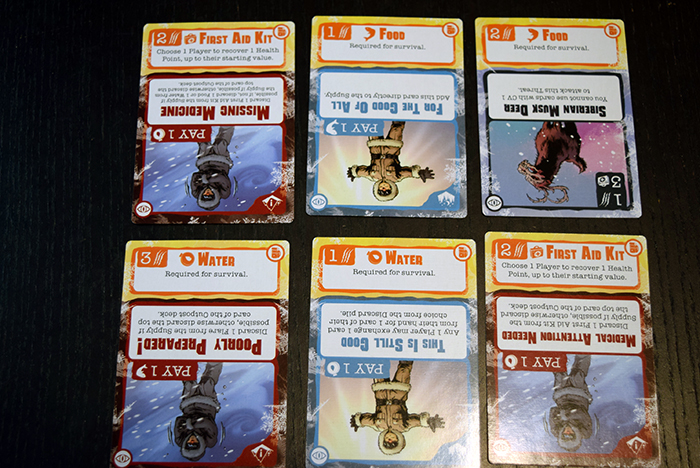 Andrew:  Right up front, let’s mention that we’re reviewing the game after some official rules adjustments/clarifications came out from IDW.  These changes make the game slightly easier for the players and, in our opinions, are pretty necessary.

Over the course of a game of Outpost: Siberia, your group will face down a deck of Expedition cards.  These cards represent the events (good and bad) and threats which your team must endure to win the game.  Threats take the form of angry predators which your team will need to spend cards to attack and defeat, and events, well, events just tend to screw you over.

Jess:  For real!  I mean, events are literally divided into ‘good’ and ‘bad’ events, but even the good ones just tend to hurt less than the bad ones.

Players will scavenge for supplies on their turn, drawing 3 cards and placing one in their hand and the other face-up on the table, discarding the 3rd.  Cards in-hand can be used to attack threats, while cards on the table can be used for their equipment keyword.

Andrew:  I liked that design choice, actually.  Each time you draw for supplies, you need to make a value assessment on where you’re investing those cards.  Sure, equipment on the table is accessible to everyone, but without cards in-hand, you won’t be mitigating threats at all. 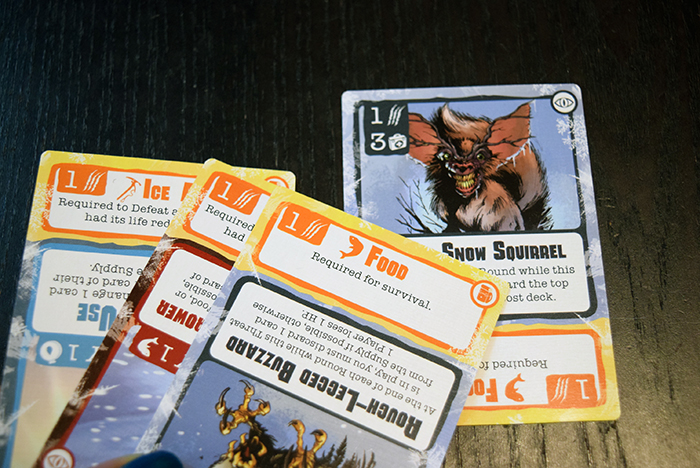 And mitigating threats is critical to your survival, because one of the loss conditions for your team is to end their turn with 5 threats active on the table.  But beyond that, threats often have ongoing, detrimental effects, so it’s in everyone’s best interest to beat back those predators as soon as you possibly can. 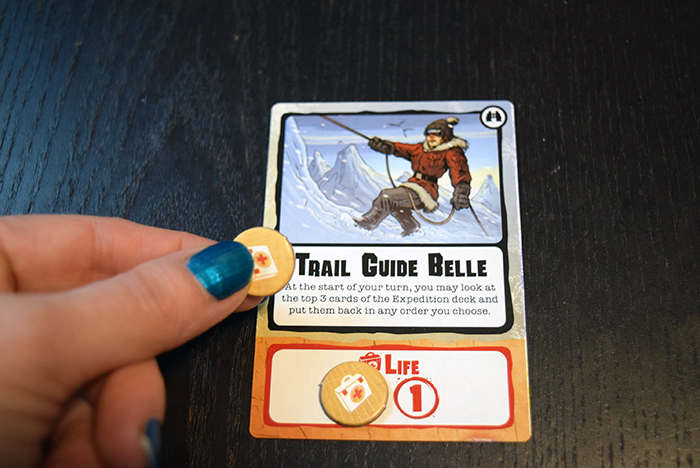 Andrew:  Yeah, you can’t possibly go in feeling like you’re going to survive unscathed.  The other loss condition, of having any single character die, can be felt pretty keenly as the game mercilessly grinds you to dust.

As we mentioned before, this review is coming after some official adjustments to the setup and draw rules were released by IDW.  These changes slightly alter the experience to make it easier on the players, but even on the default difficulty setting and using the new rules, Outpost: Siberia feels punishing. 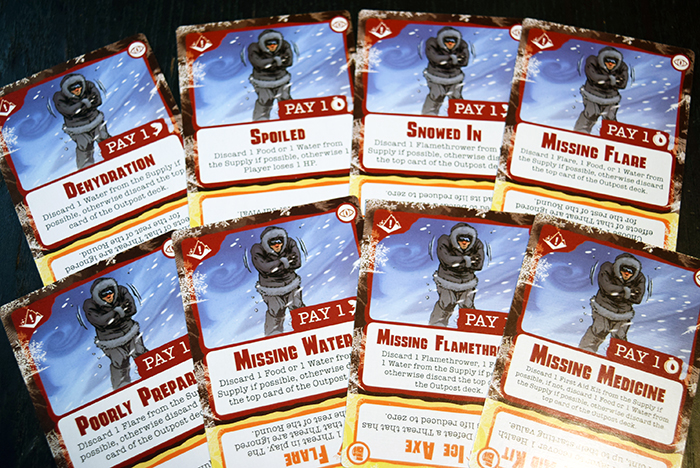 Andrew:  But ultimately, I don’t think that’s what I disliked about Outpost: Siberia.  Tough isn’t a problem for me, though I recognize I may be an anomaly there.  What bugs me is that, even when we were succeeding, I didn’t really feel like it was because we had done anything smart.

Jess:  Yeah, I think you’ve got the biggest issue, right there.  You’re walking a razor’s edge, but it’s not clever card plays or tactical use of player abilities that will save you – it’s having the right cards at the right time.  Though the challenge level is still a bit out of wack.

Andrew:  And I think the designers know it, too.  The nerf that got issued to it shows that they’re hearing that feedback from more than just a few folks.  And I really appreciate their willingness to revisit the balance of the game to improve the experience for their players.

Outpost: Siberia is a great idea.  We really love some of the design behind it, and we’re actually really hopeful that the next game in the series, Outpost: Amazon, benefits from their experience seeing feedback regarding the balance and difficulty of the game. 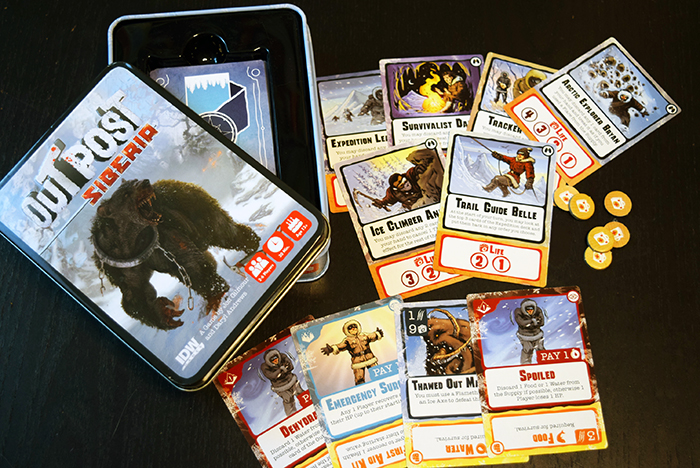 If you’re a sucker for a tough-ass cooperative game that will take pleasure in kicking you while you’re down (and don’t mind a game that comes in a small metal tin), then snag yourself a copy of Outpost: Siberia.  But for us, this one just wasn’t quite balanced enough to be our speed.

(Gameosity was provided a copy of this game for review.  We were not otherwise compensated.)