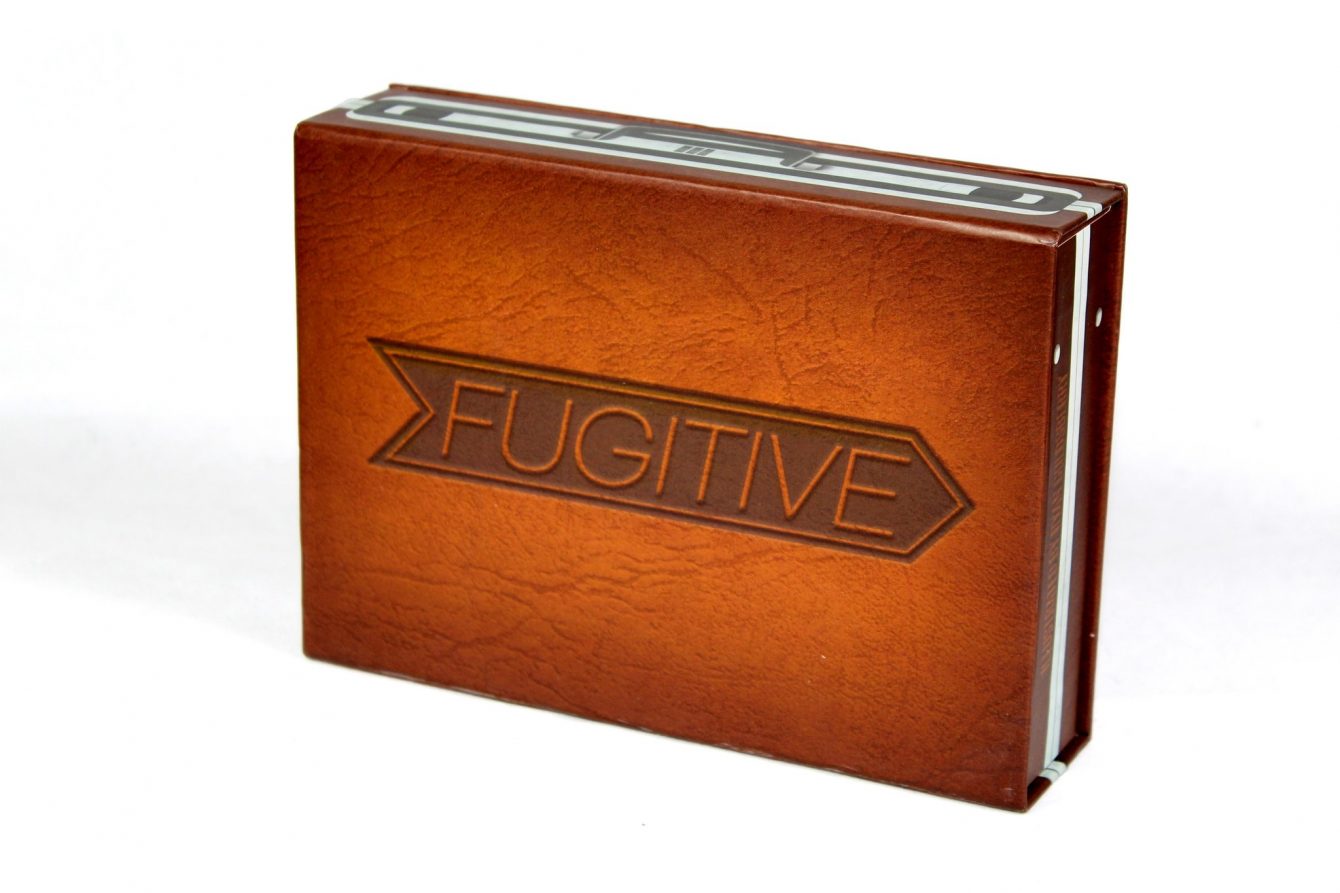 Fugitive is downright clever - a bluffing and deduction game for 2 that capitalizes on both logical analysis and a certain amount of mindgames.  With fantastic art by the excellent Ryan Goldsberry, this small game packs quite a punch.

There’s a reason that ‘chase scenes’ are mainstays of cinematic thrillers.  There are few moments in any story that can rival the excitement of that game of cat and mouse, where one character relentlessly tracks the other, matching wits and testing mettle to see whether it will be the pursuer who catches her quarry, or the pursued who will make it out by the skin of his teeth.

Fugitive, by the talented Tim Fowers, aims to bring that experience to the table with its tight, asymmetrical gameplay for 2. 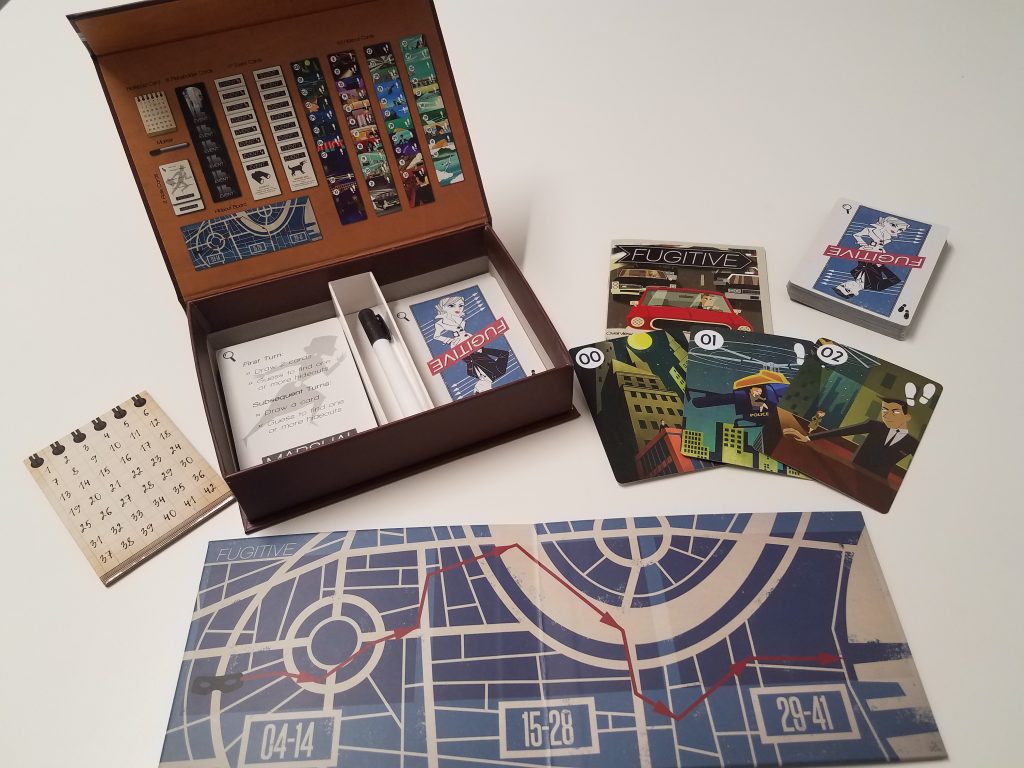 Andrew:  No, not that Fugitive. 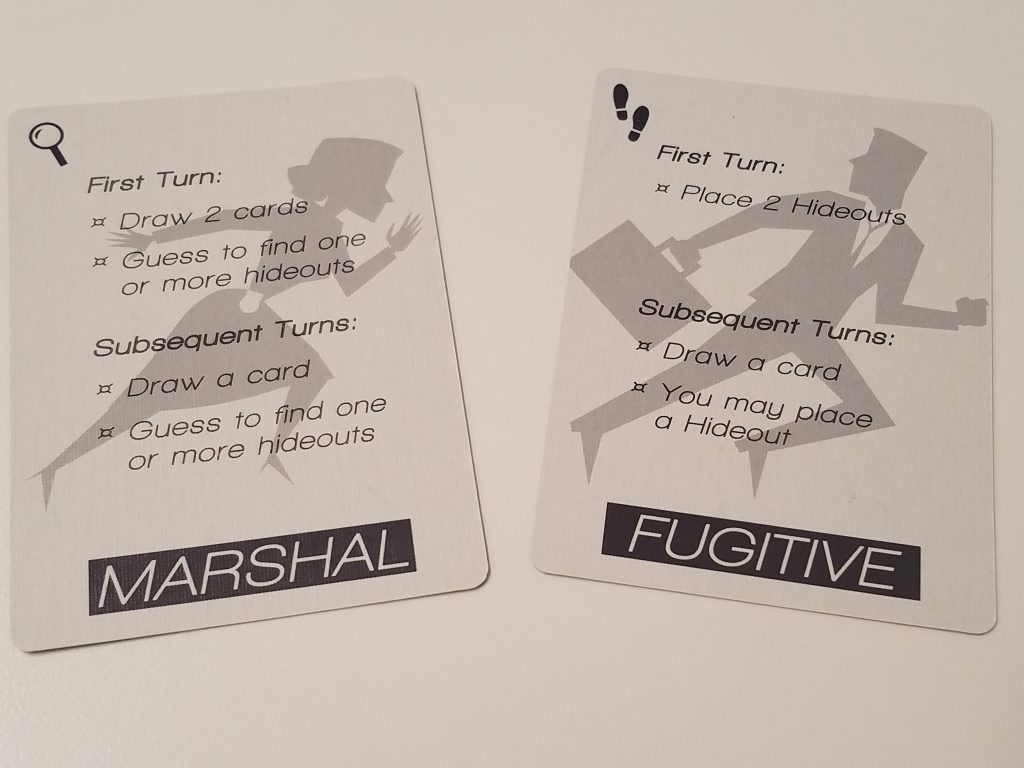 In Fugitive, one player will play that titular Fugitive, who will move from hideout to hideout as he sprints ever-closer to the airport and a clean getaway.  On the other side of the table, the Marshal will doggedly pursue the Fugitive, overturning his hideouts and setting up roadblocks ahead of him, working to snag him in an ever-tightening pair of handcuffs.

Andrew:  Handcuffs not included.  They probably wouldn’t fit in the game’s small box.  On the other hand, it’s a really nice box!  Love a magnetic clasp.

Each turn, the Fugitive will use the cards at his disposal to establish new hideouts.  The cards in Fugitive are numbered 0-42, and each new hideout must a) be a higher number than the previous, and b) cannot be more than 3 cards higher than the last.

The Marshal, on the other hand, spends her turns trying to deduce the card values of the Fugitive’s hideouts.  Each turn, she can guess one (or more) number and, if it matches any hideout, the Fugitive must flip that card face-up, bringing her one step closer to catching him (the Marshal wins if the Fugitive has no more face-down hideouts).

Sprinting is the Fugitive’s ace in the hole – by spending extra cards, the Fugitive can bypass the ‘no greater than 3 higher’ rule about making new hideouts.  Of course, that’s taxing on the Fugitive’s card resources.

The Marshal, on the other hand, has her own trick up her sleeve – each turn, she will draw from the same cards which the Fugitive uses to make his hideouts.  This both gives her more information, as well as creates a drought of cards for the Fugitive to work with – these ‘roadblocks’ can make setting up new hideouts incredibly challenging, and greatly factors into the Marshal’s strategy.

Andrew:  And there is a surprising amount of strategy at play here.  Regardless of what side you’re playing, you’ve got both the logic puzzle of counting the cards you have access to while also trying to out-think what your opponent may do on their turn.

Jess:  When you’re the Fugitive, you might first think, hey, I want as many hideouts as possible to keep the Marshal busy, but that uses cards more slowly and draws out the game, and the Marshal will keep setting up road blocks with her every passing turn.

Andrew:  And as the Marshal, you need to figure out the logic the Fugitive is using to set up his hideouts, because with each card that hits the table, they are getting further and further ahead.

Thematically, Fugitive succeeds really well.  While the whole card-pile/logic-puzzle thing itself isn’t very evocative of what it represents, the mind-game that happens at the table is absolutely thematic, and the phenomenal art on the cards does a great job of illustrating the chase itself.

Andrew:  I especially love that if you line up all the cards in a row, they really do show the entire story of the game.  It’s a little aesthetic touch that adds so much to this slick little game.

Jess:  Now, I’ve played both sides of Fugitive, and I think that it may be slightly tilted in favor of the Marshal?  But I’ve also heard people say the opposite, so it’s balanced enough not to be a big deal to me.

The success of the Fugitive Kickstarter means that all copies also include Event cards to keep things interesting, either conferring an advantage to one side or the other, or even be set up to provide a catch-up mechanism for whatever player may be ahead in the game when they are drawn.  Events add just enough variance to provide more depth of play for veteran Fugitives and Marshals alike. 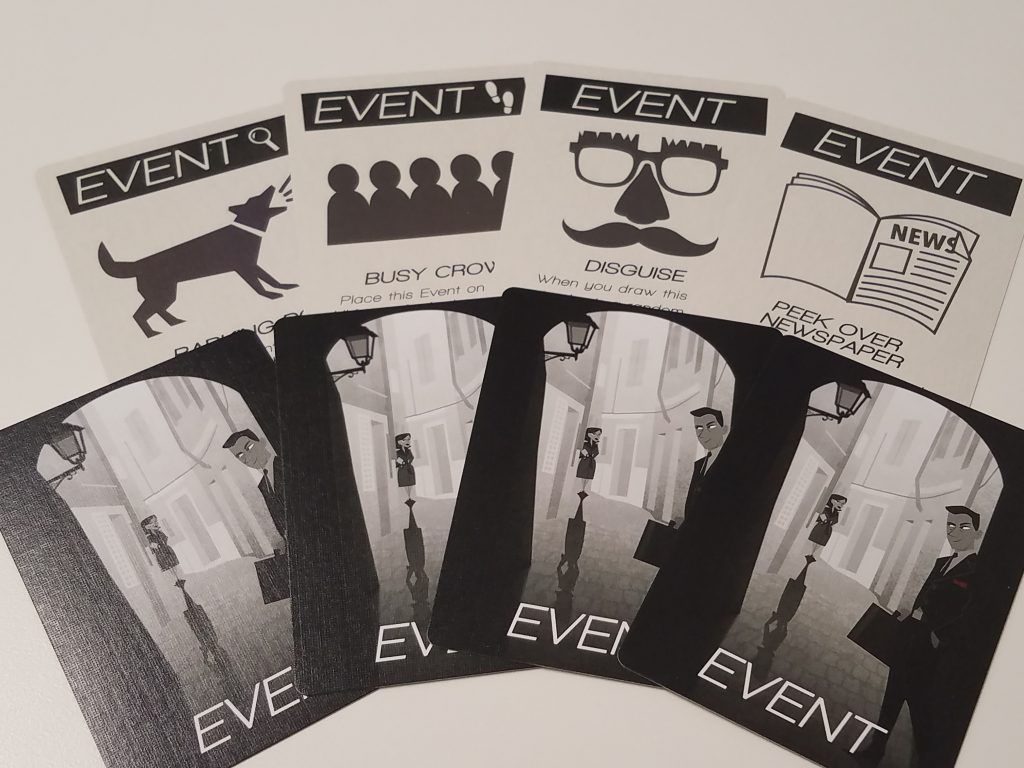 Andrew:  I think the big success in Fugitive, and I do think Fugitive is quite successful, is that the two sides feel different.  You don’t just have different options or powers, each side benefits from a different approach and mentality, and that’s really cool.

Jess:  Yeah!  The Fugitive wants to make the biggest jumps possible without burning through all his resources, so it’s all about risk management and big, daring plays.  On the other side, the Marshal wants to apply constant pressure, methodically working her way through the Fugitive’s hideouts, and she wants to make sure that the cards she draws will create gaps further down the line so that the Fugitive is less easily able to establish hideouts. 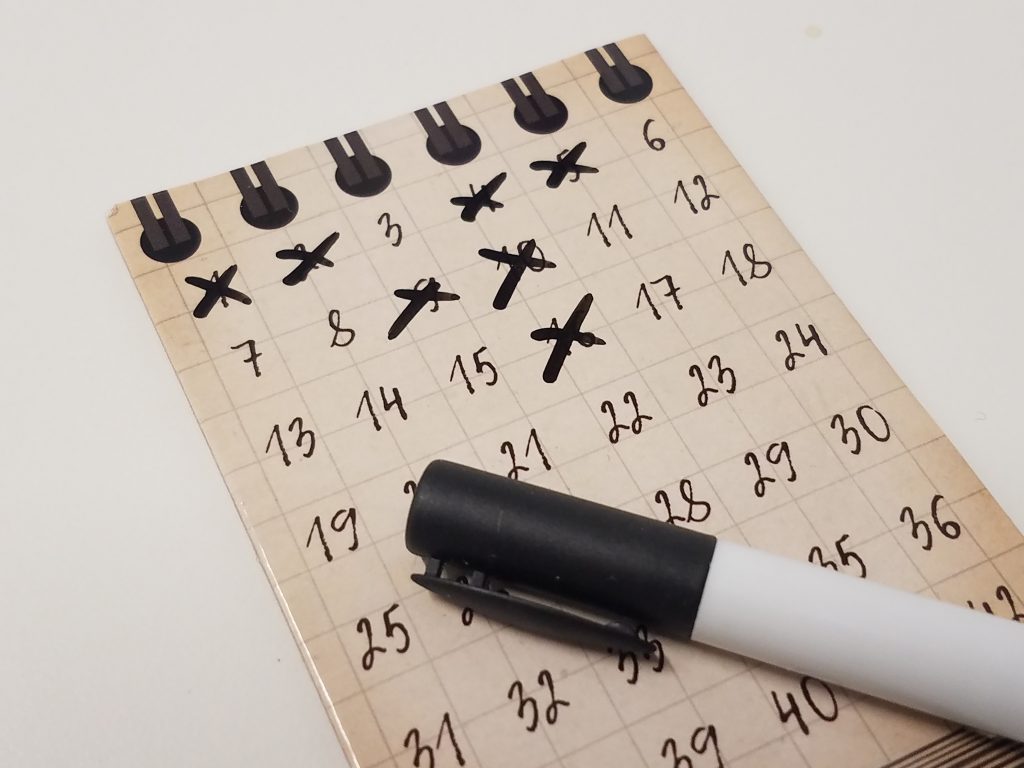 Andrew:  It creates good table tension – each time a guess goes wrong, the Fugitive gets this little thrill of victory.  And every time she guesses correctly, the Marshal gets to rattle the Fugitive’s cage.  I love the dynamic at play.

Jess:  I also love the production of the game itself.  You already mentioned the great art and the nice box, but this little game shows a lot of care.  Dry-erase board for the marshal to keep track of numbers, nice little board for organizing the card piles, and even a component list on the inner cover – I feel like lots of love went into both the design and production here, and it’s awesome.

Fugitive is an excellent game for 2.  The riff on bluffing and deduction works surprisingly well, creating a table experience that players should really enjoy getting into.  And with a small playspace and manageable components, it also makes for a fantastic portable game – you could probably play it across 2 tray-tables on a plane without a problem.

Andrew:  But of course, if you’re already on the plane, the Fugitive has won… 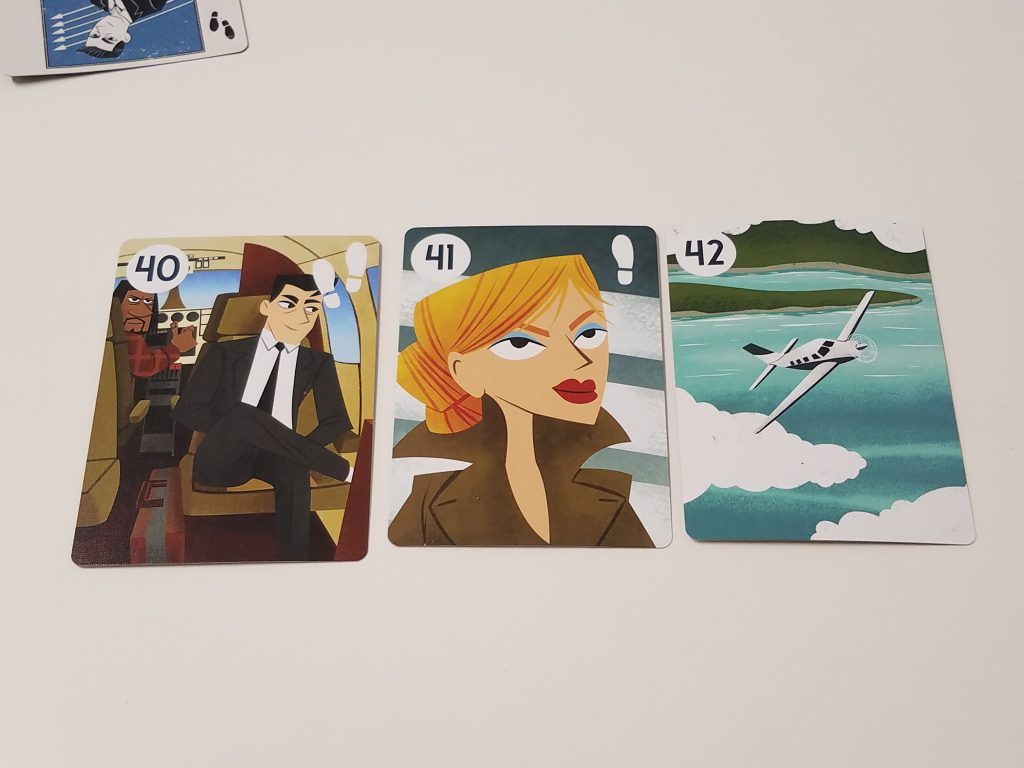 Fugitive can be ordered directly from Fowers Games, along with their other fantastic titles!

(Gameosity received a review copy of this game after having done a Kickstarter Preview for it.  We were not otherwise compensated.)