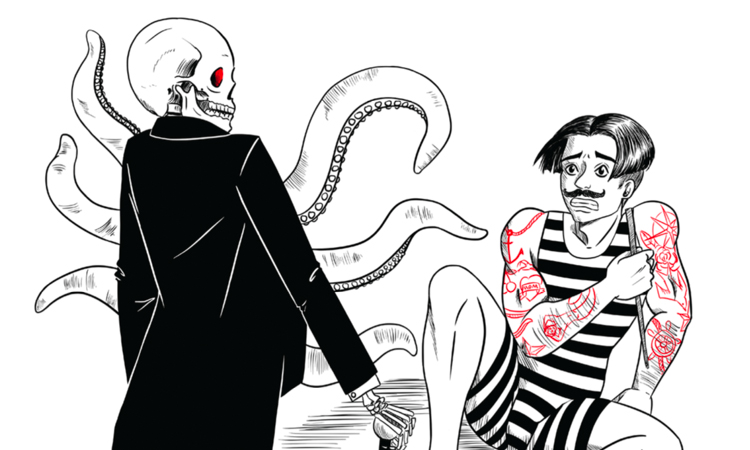 Joseph: So this past weekend was Dreamation. For those who don’t know, Dreamation is one of three conventions hosted by the fine folks over at Double Exposure each year. It’s probably my favorite convention in North America other than GenCon, as it brings together a wide range of both indie and traditional gamers. You get to play older games nobody really wants to run (I got to play Burning Wheel for the very first time!), but you also get to discover entirely new games that may not even be on the market yet. This year, as is true of every year I’ve attended, I discovered several things that really got me excited. But shining above them all was the debut game by a designer named Lucian Kahn. That game is Dead Friend: A Game of Necromancy. 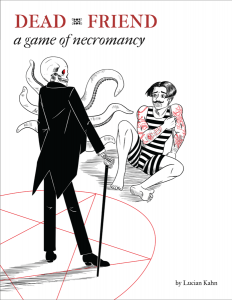 Now there are a few things that might stand out immediately as different to traditional RPG players. Firstly, the entire book is 13 pages long. Including the cover. Secondly, it’s a diceless system. Play is conducted using tarot cards, two coins, and, I kid you not, matches and salt. Third, it’s a game for two players. Not two players and a GM. Just two players. You could play this thing over dinner at a restaurant. Heck, I might try that next time.

For me, any game that starts so radically different is thrilling. I’ve memorized enough dice mechanics over the years that even the idea of something new is tantalizing. But if newness was all that Dead Friend delivered, I’d file it under “scrap it for parts” along with dozens of other games. Thankfully, the actual play experience ends up being quite memorable.

In short, the game revolves around the collaborative worldbuilding of one player, The Living, and the other, The Dead. It alternates between the present ritual summoning and flashbacks of the life they had together on Earth. If that sounds loose, that’s because it is. My game involved a tryst between a Russian spy and an American spy during the Cold War and the later attempt to raise the departed aboard a nuclear submarine. But literally no part of that was in the book. We could have played in the Medieval period or in outer space.

The book isn’t your traditional mix of mechanics, setting, and GM advice. Instead, it’s something of a guidebook. Quite literally, it takes you through the various prompts to keep forward momentum in your unique story. This is done through the conceit of “rituals,” which ends up working thanks to the thematic consistency of the game.

I should say that Dead Friend might not be for everyone. Not because it goes to dark places, as you might expect from a game about necromancy. If anything, it can be a bit silly. But it might not be for you if you want some heft to your RPGs (I’m looking at you, OSR crowd). Dead Friend is an incredibly light product, but one that can provide hours of fun with minimal learning curve. Heck, I’m loathe to dig into the workings of this game as much as I normally would simply because any real elucidation would dampen the effect. Plus, the game is currently on sale for the insanely cheap “suggested” price of $1.99 on DriveThruRPG. That’s less than a cup of coffee – oh God coffee is expensive – so I don’t feel too bad saying “Just buy it already for the sake of seeing something cool, good, and new!”

Pick up a copy of Dead Friend: A Game of Necromancy here on DriveThruRPG