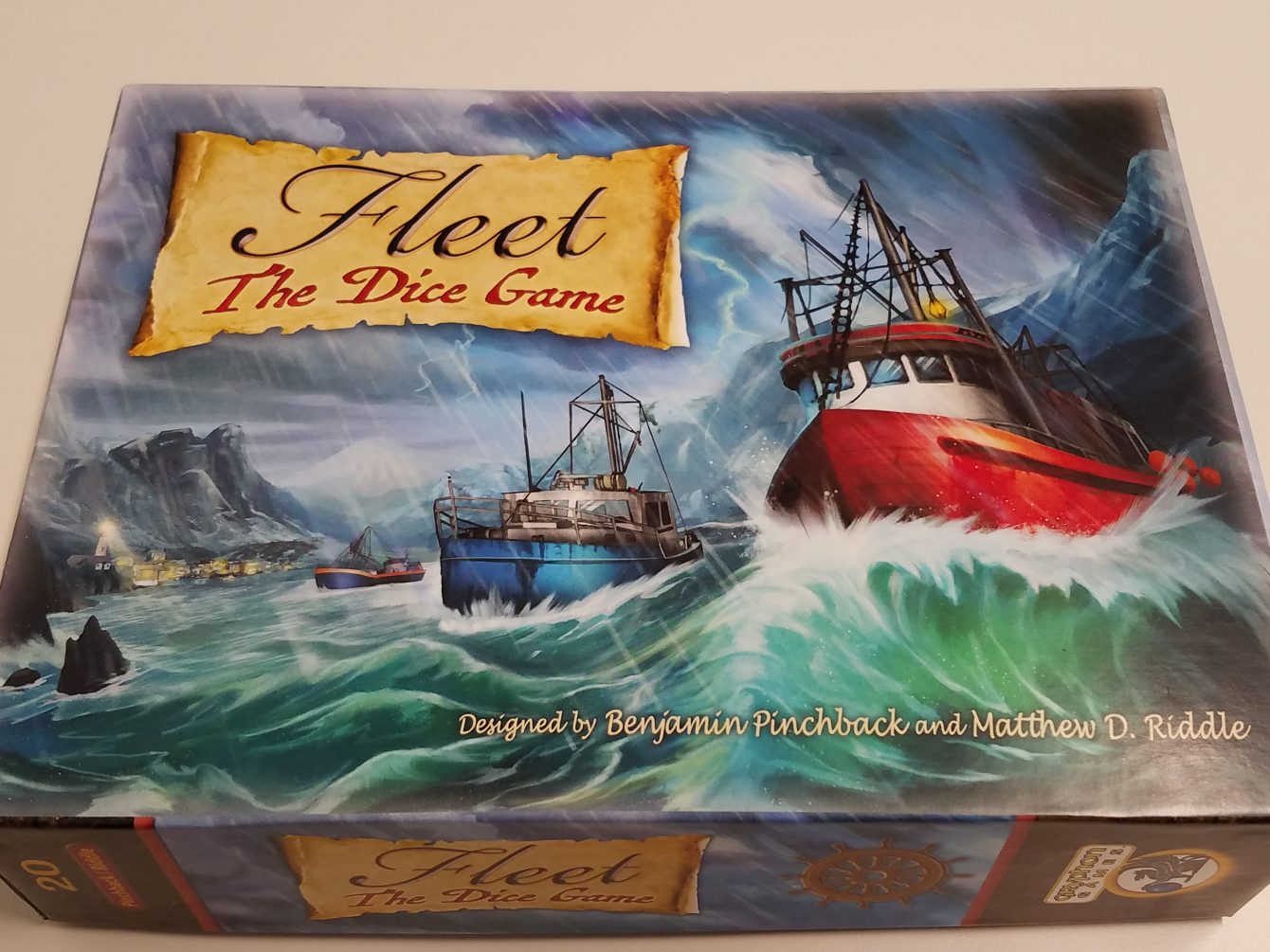 Fleet: The Dice Game manages to capture the engine-building core of the original while delivering the experience in a shorter, tighter, more portable package.  While we still love the original, this distillation does everything right.

So, if you’ve followed Gameosity for a while, you might know that we love Fleet.  This engine-building, auction-driven game about emptying the oceans of fish is still one of our favorites, and it introduced us to Ben Pinchback & Matt Riddle, who have gone on to design more than a few quality titles since (Floating Market, Ladder 29, Wasteland Express Delivery Service).

Well, the RidBack Duo is at it again!  Riding the rising tide of roll & write games (a trend we love, incidentally), the pair has put together Fleet: The Dice Game – a dice-drafting game that seeks to capture the core essence of the original Fleet while delivering a fresh take on those well-constructed mechanics.

**Kickstarter Prototype Alert!  All that you see before you might change!**

Jess:  And we weren’t really sure whether they could do that – not that we don’t have faith in the designers, but because, well, we love the original!  I wondered if they were going to be able to give us an experience that felt enough like it to share the name while being new enough to justify itself.

Andrew:  Well, spoilers, I feel like that mission is well accomplished in Fleet: The Dice Game.  But before we opine too much, let’s give a general overview of this Kickstarter prototype.

For those unfamiliar with roll & write games, the general definition is that the games are played with each individual player keeping track of roll results on their own player sheet, usually with the goal of filling in boxes (or bubbles or lines or whatever) in a particular sequence in order to score points.

In Fleet: The Dice Game, as in Fleet, your goal is to earn the most points by the end of the 10 rounds of the game.  Each round is divided into two phases, and are represented by the two halves of your player sheet. 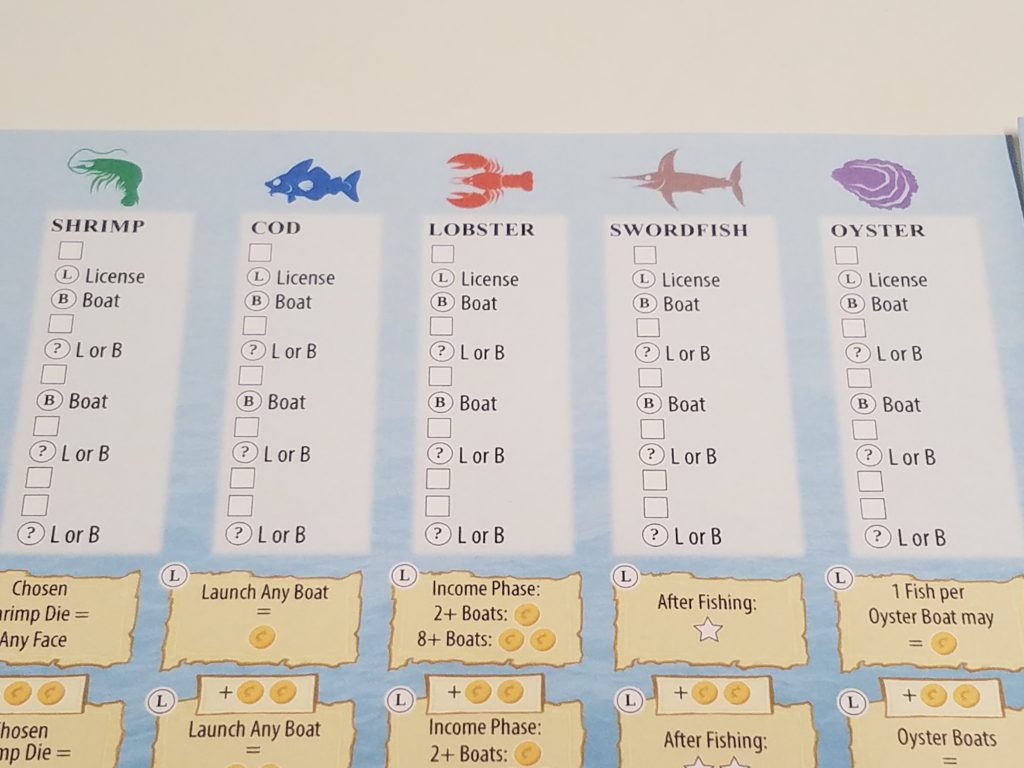 Andrew:  I really love the sheets in Fleet: The Dice Game – there’s a lot of information to be kept track of, but it’s all there to be seen at a glance.

During each phase, the active player will roll some dice, and each player will draw one and fill in the appropriate spot.  Then all players will get to use the one remaining die for the round.

The first phase is the Boat phase, with the dice all letting players progress along the various fishing type tracks.  These tracks will let you launch boats for fishing, as well as give you licenses which bestow special powers & enhancements as you complete them. 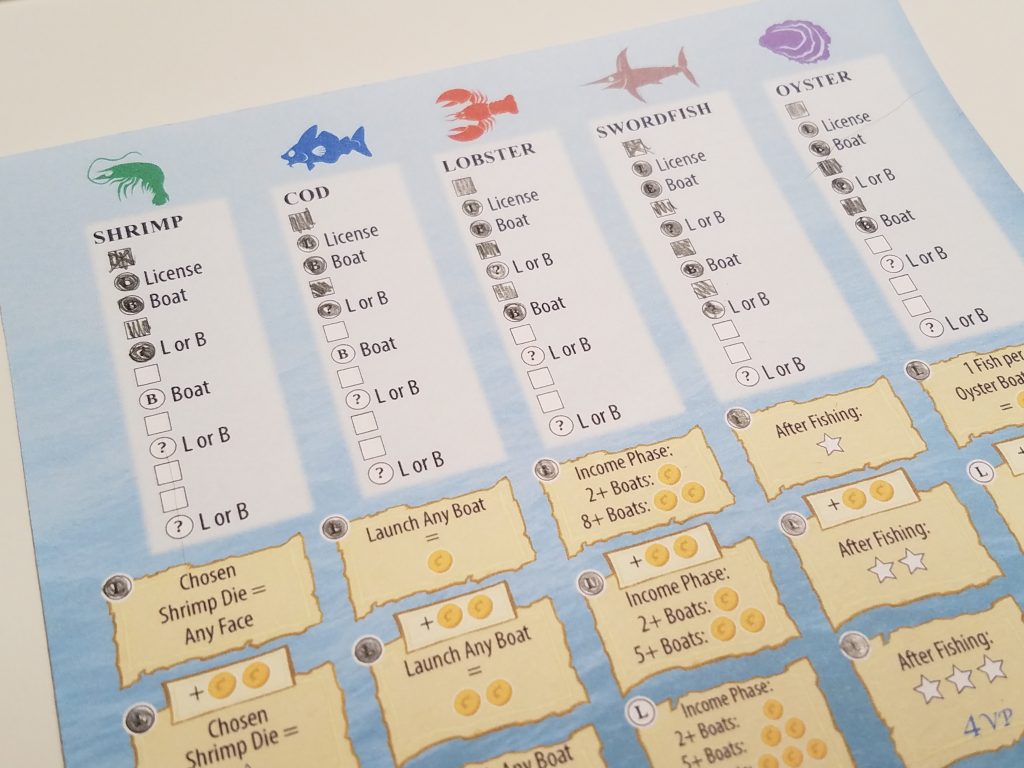 Jess:  Boats are really important, because on every even round, players’ boats will go out and fish, amassing victory points!

Andrew:  And the Licenses give you really useful abilities, particularly since they are designed to synergize with each other and other actions you will be taking during the game. 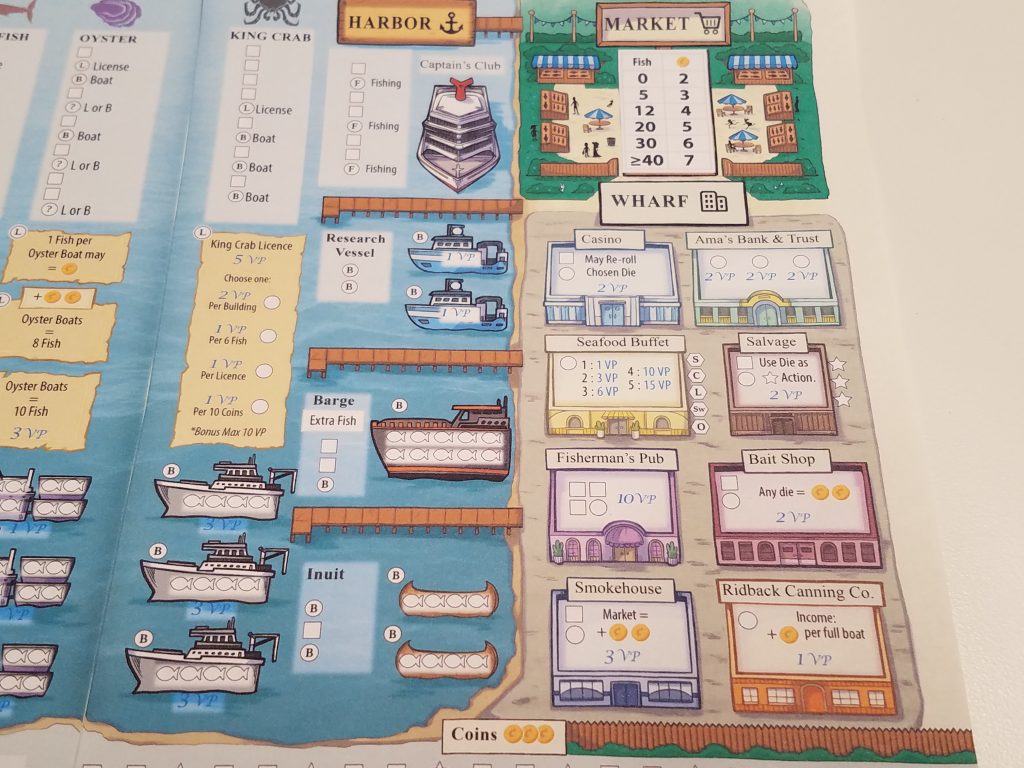 The second phase is the Building phase, where the dice will let you construct various buildings around the wharf.  These buildings provide alternate paths to victory points as well as extra opportunities to launch boats and gain end-game bonuses.

Gameplay continues in this fashion, with players drafting dice, launching boats, and investing in buildings until the end of the 10th round, when victory points are tallied and a winner is declared!

Andrew:  So, as you said before, we’re big fans of Fleet, and the reason we like it so much is that sense of the ever-improving engine.  With each license you get and each boat you launch, every action gets more powerful and complex, with powerful combos giving you lots of resources and options. 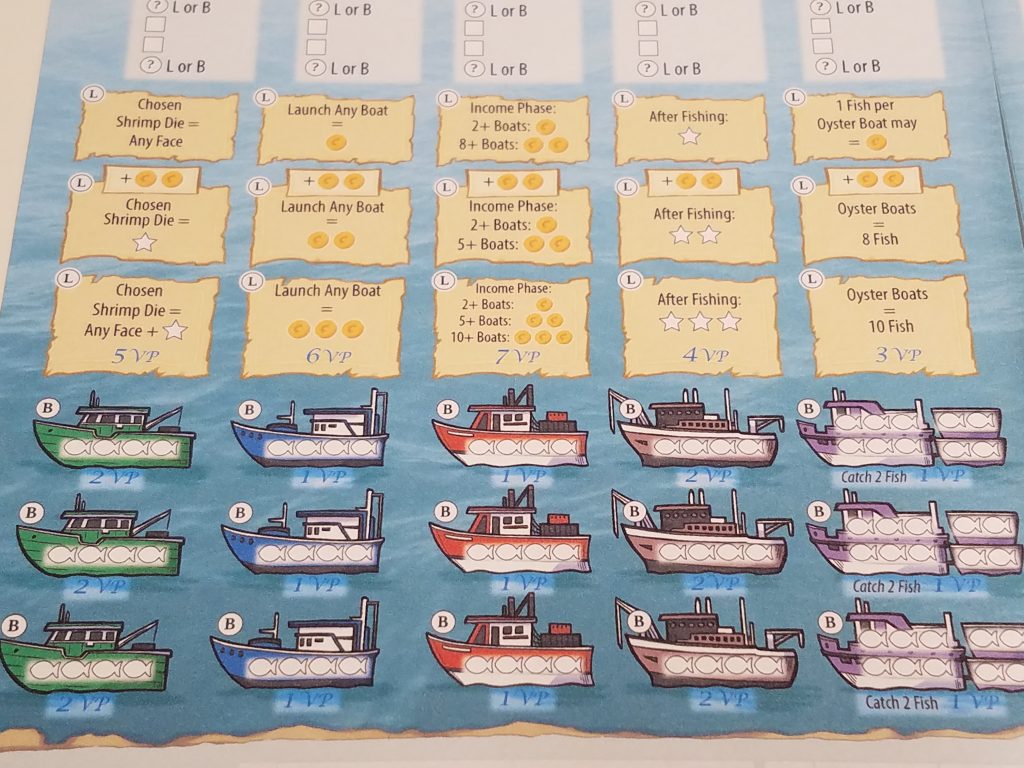 Jess:  Absolutely.  And the good news is that Fleet: The Dice Game manages to capture the spirit of that, albeit in a faster, shorter, tighter package.  Fleet: The Dice Game does away with the auction mechanic (admittedly the part of Fleet I liked the least) and puts in a nice dice-drafting phase, which adds uncertainty without completely robbing the players of choices.

Andrew:  Exactly!  Of course, it sucks when you don’t have any dice you want, but at the bare minimum, you can always convert dice to money, which frequently translate into wild fill-ins anyway.  Between that and the fact that you’re getting 4 dice per round, Fleet: The Dice Game feels pretty generous, and it’s satisfying to build up your engine and watch those fish come rolling in. 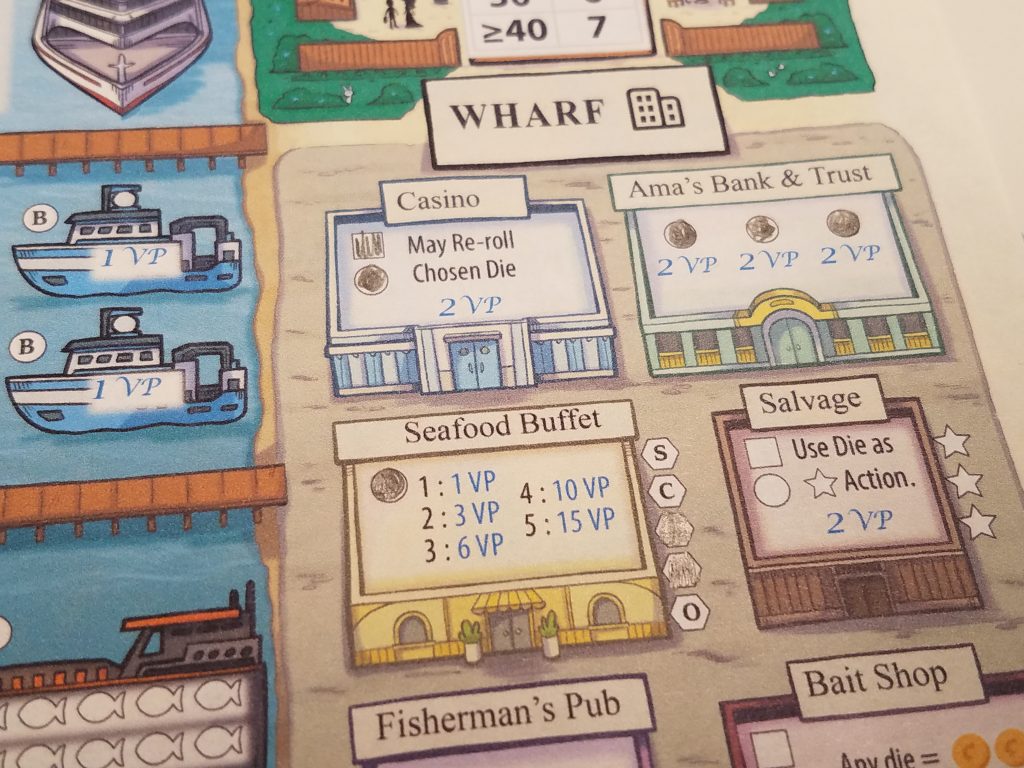 Our main criticism of Fleet: The Dice Game is simply the flip-side of our favorite things about it – with each license, your turn gets more and more complex and it is quite common for a single fill-in to trigger a cascade more, multiplying both the effect (yay!) and time (boo!) taken with each round.  While the first few will whiz by, at the end of a game of Fleet: The Dice Game, each die can take a minute or two to fully resolve. 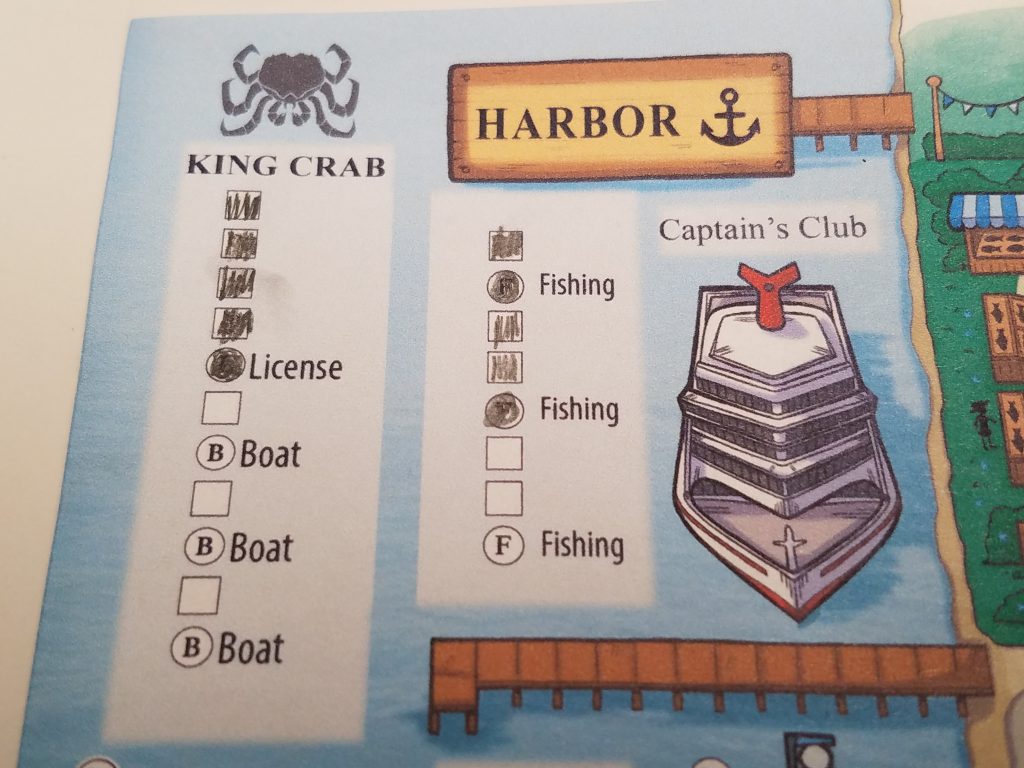 Jess:  Fortunately, you all pretty much do those things simultaneously, so extra players doesn’t mean extra time lost, for the most part.

Andrew:  Yep.  On the other hand, there’s a lot to remember towards the end of the game.  That’s not really a bad thing, but it’s also easy to forget a bonus or an extra action or whatever. 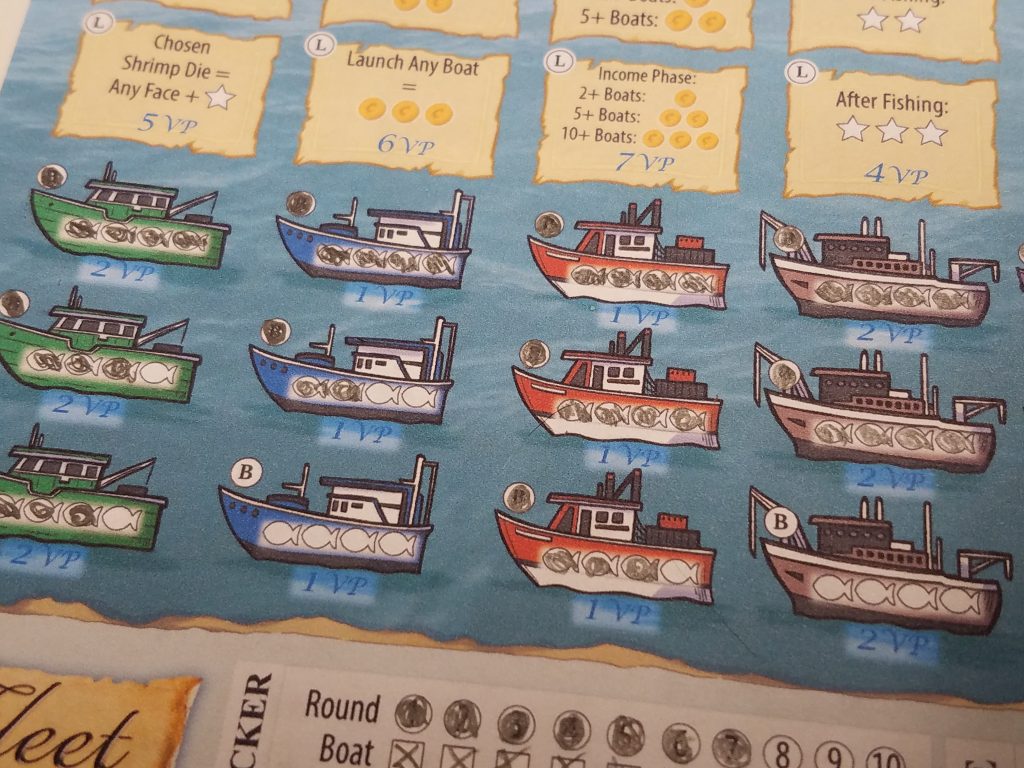 Jess:  That’s true, and honestly, I think Fleet: The Dice Game would make a fantastic app.

Jess:  Bottom line, I think Fleet: The Dice Game is excellent.  It keeps the things I love most about Fleet and it does so in a way that makes it just as fun to play in a fraction of the time.

Andrew:  You’ve got that right.  My question was whether I would feel like there was a place for both games in my collection and I’m happy to say the answer is yes.  Fleet is a great game for a long play, and Fleet: The Dice Game gives you the same core experience in a shorter, more portable format.  It’s a stand-alone spin-off done right.

So there you have it – Gameosity wholeheartedly recommends checking out the Fleet: The Dice Game Kickstarter when it goes live on the 27th!

(Gameosity received a prototype of this game, with the option of requesting a finished copy.  We were not otherwise compensated.)