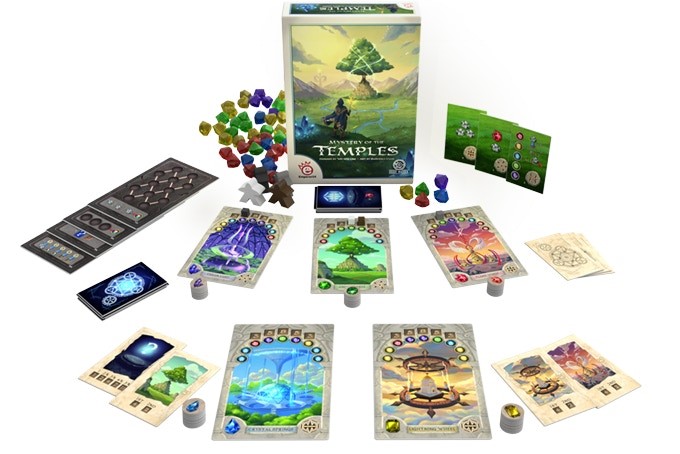 Thriving on straightforward mechanisms, Mystery of the Temples is a pleasure to play.  Spilling out onto the table beautifully, this set collection game brings enough cleverness in its decisions to keep players engaged while not over-complicating itself or overstaying its welcome.

Andrew:  Tell me you don’t have a favorite pair.

Jess:  There are some nice quality-of-life improvements in the Deep Water Games edition, so we’re stealing some photos from their Kickstarter.

In Mystery of the Temples, players will take on the role of ‘curse breakers’ traveling to different temples to gather and deliver crystals to…break curses, I think?  Look, the game is a beautiful, mostly abstract set collector, and that’s really all you need to know about the theme.

The setup for Mystery of the Temples has types of cards.  One ring, the wilderness, will let players gather up and manipulate their supply of crystals.  The crystals which players collect are stored on their individual crystal grids, and the order and placement of these crystals matters when they are turned in for points. 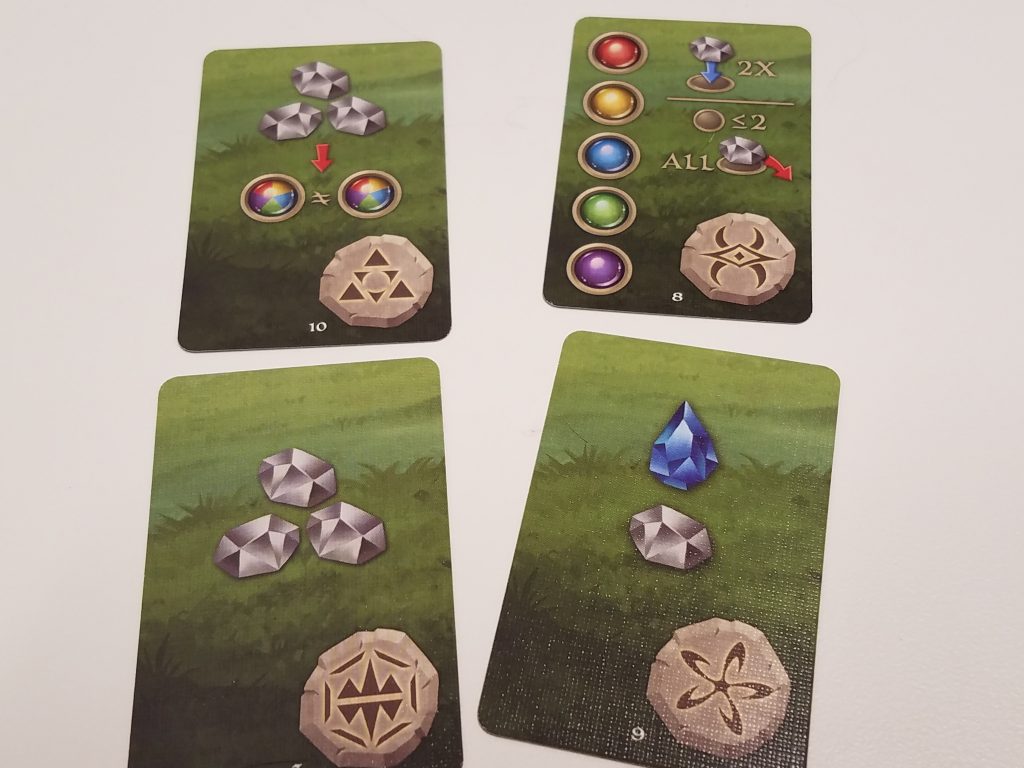 The second ring, the temples, is where players will deliver specific sets of crystals to score points (temples also provide a place to get specific color crystals).  In order to score at a temple, players must discard crystals from their personal grid, matching the sequence of colors specific to that temple.

Andrew:  Sounds simple enough, and it is!  But there are a few key features of Mystery of the Temples that give this little game more depth than you might expect.

First, the way players move is sublimely straightforward – all player pieces advance around the circle in clockwise fashion, moving 1, 2, or 3 spaces.  However, no to pieces can occupy the same space, and players can move either around temple ring or the wilderness ring.  This means that it is entirely possible for one player to anticipate another’s movements and put themselves in a blocking position.

Jess:  Which can be a critical part of the strategy, of course.  But on the other hand, if you spend your movements boxing out your opponents, you aren’t necessarily moving towards your own goals.  So it’s a balancing act.

Andrew:  What I liked most about this is that, with fewer players, it was easier to be more strategic.  At max players, though, you’re constantly bonking into each other no matter what.  The board state is a little more chaotic, and it requires you to pivot your plans on the fly, which I like.

Another strategic element is the gathering and storing of the crystals themselves.  See, when you get crystals, they get added to your storage grid.  However, in order to spend crystals to score points, you will need to discard them in the specific order of colors as shown on the temple, and in order to do so, those crystals must form an unbroken chain in your grid.

Jess:  This little detail is so simple but it’s so clever!  It stops Mystery of the Temples from being a game where you just race to gather as many bits as possible as fast as you can.  Instead, you have to be smart about the order you collect crystals and how you plan on spending them…and it makes it maddening when someone just barely manages to out-maneuver you and snags the scoring opportunity you’d spent turns building up.

Adding to the strategic depth of this otherwise straightforward game are how the runes work.  Runes are cards you will gather when you score different temples, and, in addition to forming a set-collection endgame scoring opportunity, runes multiply the effect of action spaces, letting you gather and manipulate gems more and more easily.

Andrew:  Mystery of the Temples has a really smooth gameplay arc.  When you start out, everyone is really just moving around getting whatever gems they can manage, hoping to score.  But as the game goes on, the strategy deepens and the rune cards make bigger and bigger plays possible.

Jess:  And just when it’s gone as far as it probably should go, the game ends.  Mystery of the Temples lasts exactly as long as it should, and I love that!  But I also love the game in general.

Andrew:  Me too.  There are things we didn’t get into here which further add value to the game – advanced variants which give each player unique abilities, the endgame scoring goals, the simple, effective tweaks to the 2-player experience…I think Mystery of the Temples has a lot going on, and I like all of it.

Jess:  The newest printing will address some of the minor annoyances (the box-top scoreboard) and quality of life issues (colorblind unfriendliness), making Mystery of the Temples even better! 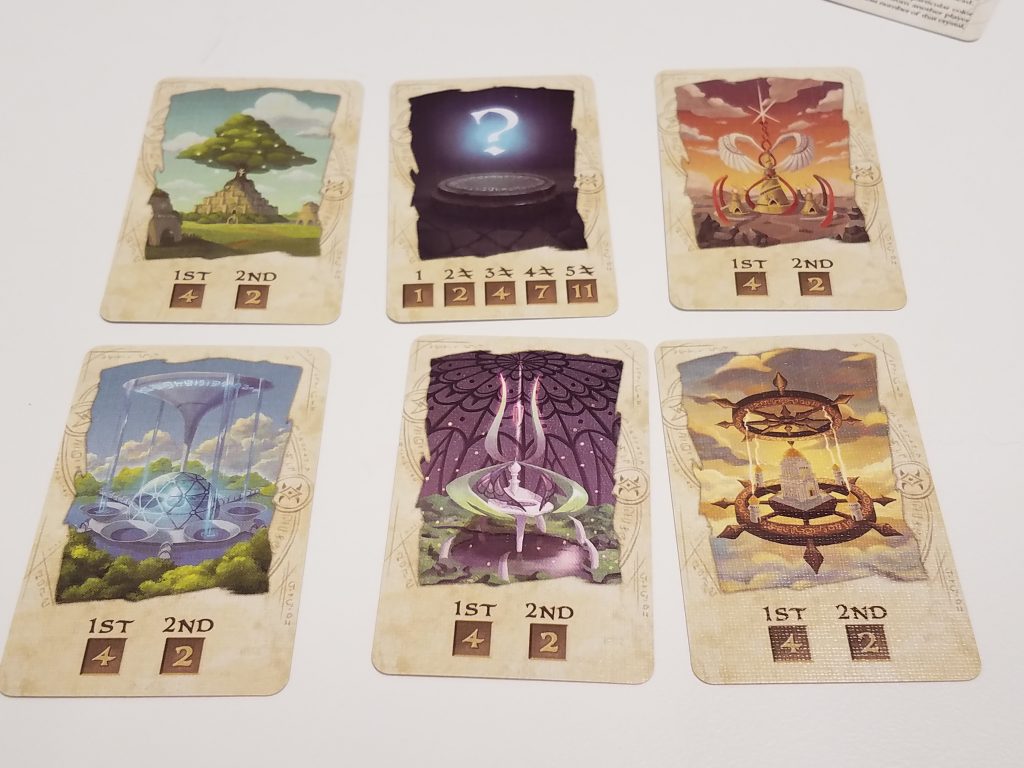 The Deep Water Games Kickstarter campaign for Mystery of the Temples is running right now, and if you’re in the market for a fun, attractive, quick game that’s more than the sum of its attractive parts, we recommend heading on over and backing it now!