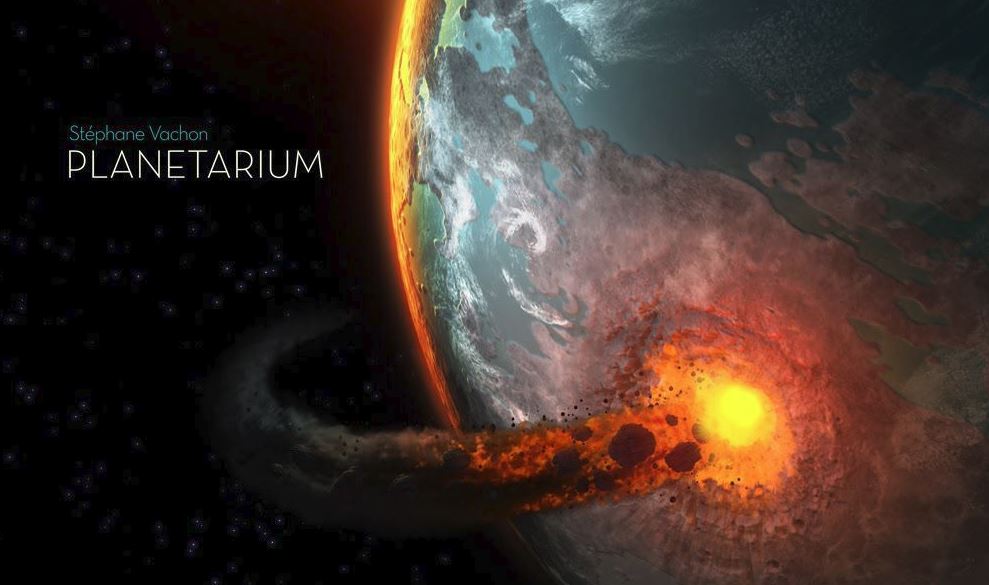 Planetarium surprised us with its smooth mechanics and tight (but not too tight) gameplay.  There is a certain elegance to its components, presentation, and experience that we really appreciated and enjoyed.

I’ll be honest, Planetarium surprised me.  When we reported on the Kickstarter (and interviewed one of the artist, Dann May), it seemed to me that a game about the creation of a solar system would be sweeping, vast somehow.  The art, in particular, promised a sort of universe-spanning experience, and while I certainly looked at the mechanics, somehow my expectations were…

Andrew:  Well, you can’t get much bigger than a solar system, without going, uh, galactic.  But no, I meant fussier, I guess?  It didn’t seem to me that the cosmic development of planets would be so straightforward.

But let’s take a step back from my misplaced expectations.  In Planetarium, players will participate in the formative moments (millennia) of a new solar system.  Taking control of the celestial detritus swirling about the young star, each of the players will work to change the face of the four planets of the system, working to create terrestrial conditions which will meet their objective cards, and thus score them points.

Jess:  What’s interesting is that the game doesn’t really explain the players at all – we aren’t gods or spirits or whatever.  We just represent universal forces, like gravity, and how they can affect things.

Andrew:  I actually quite liked that.  Planetarium feels ‘science-y’ from the get-go; the presentation is somewhat austere, the board is mercilessly geometric, and at no point do you become the object of worship for ancient aliens, or whatever.  And the science facts on the cards are accurate, which I love.

The way players interact with the planets in Planetarium is simple – on their turn, players will seek to add matter to the various planets in the system. 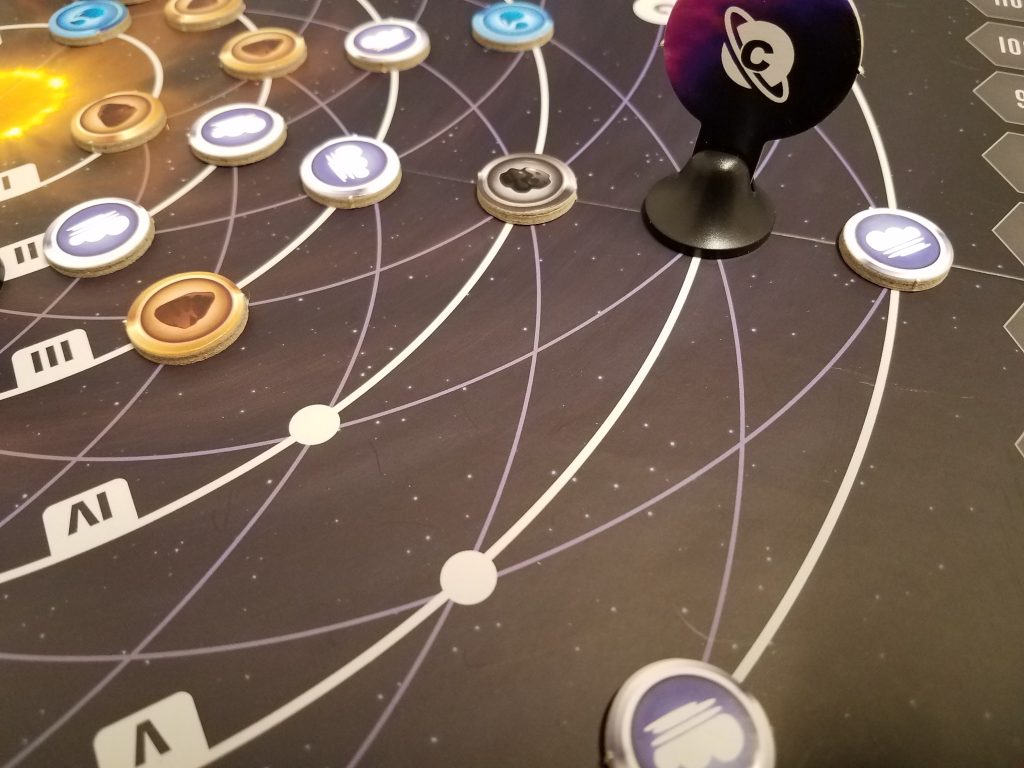 Each player exerts equal control over the four planets, though the matter they gather (either by smashing the planet into the matter or vice versa) belongs to them alone.  There are four base matter types; gas, rock, water, and metal, and each one is a resource to be spent.

After a player has tinkered with the orbit of a planet and perhaps smashed into some cosmic detritus, they can use what they have gathered to affect changes to the environment of these young planetoids. 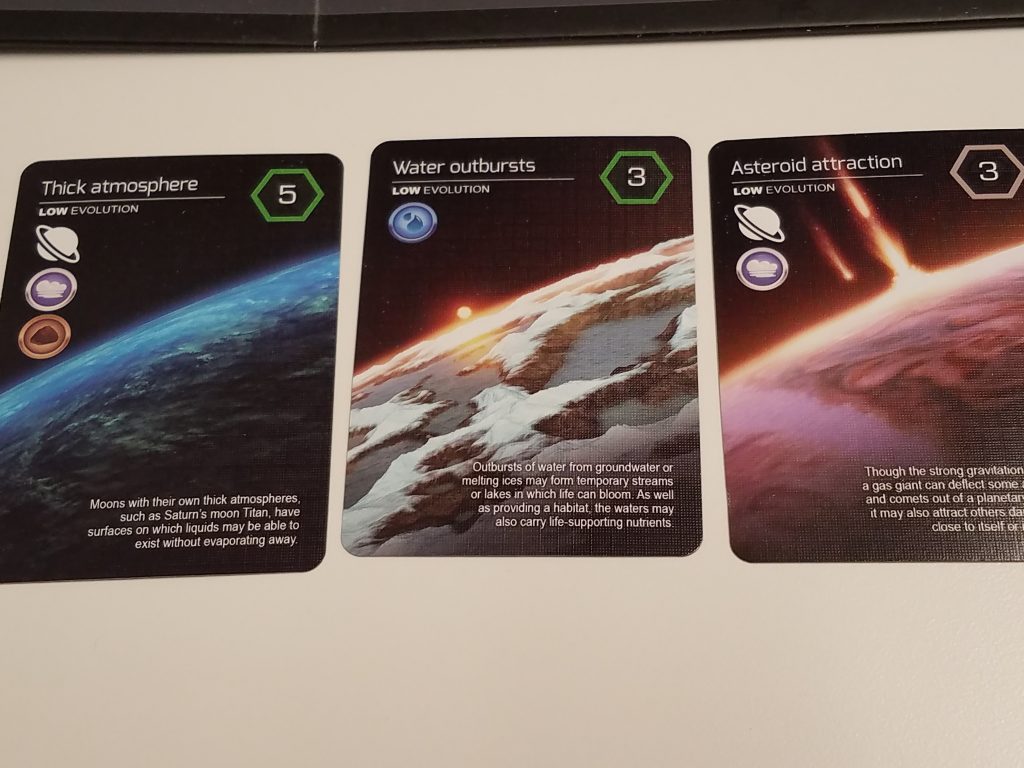 These planetary Evolutions come in three flavors; low and high evolutions are easier or harder to accomplish (respectively), and cost differing amounts of matter. 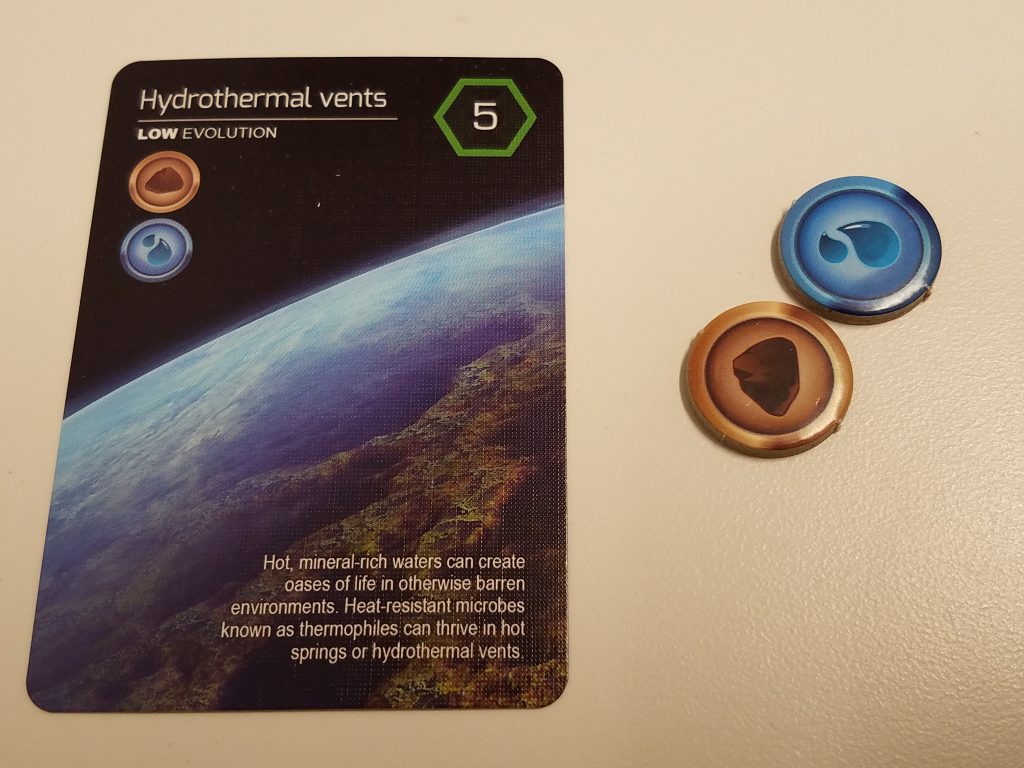 Final evolutions represent end-game scoring opportunities, and provide players with points so long as the criteria listed on them can be met by at least one of the planets in the system at the end of the game.

Jess:  The Final evolutions serve the same purpose as, say, route cards in Ticket to Ride – they give you goals to work towards and to build your strategy around. 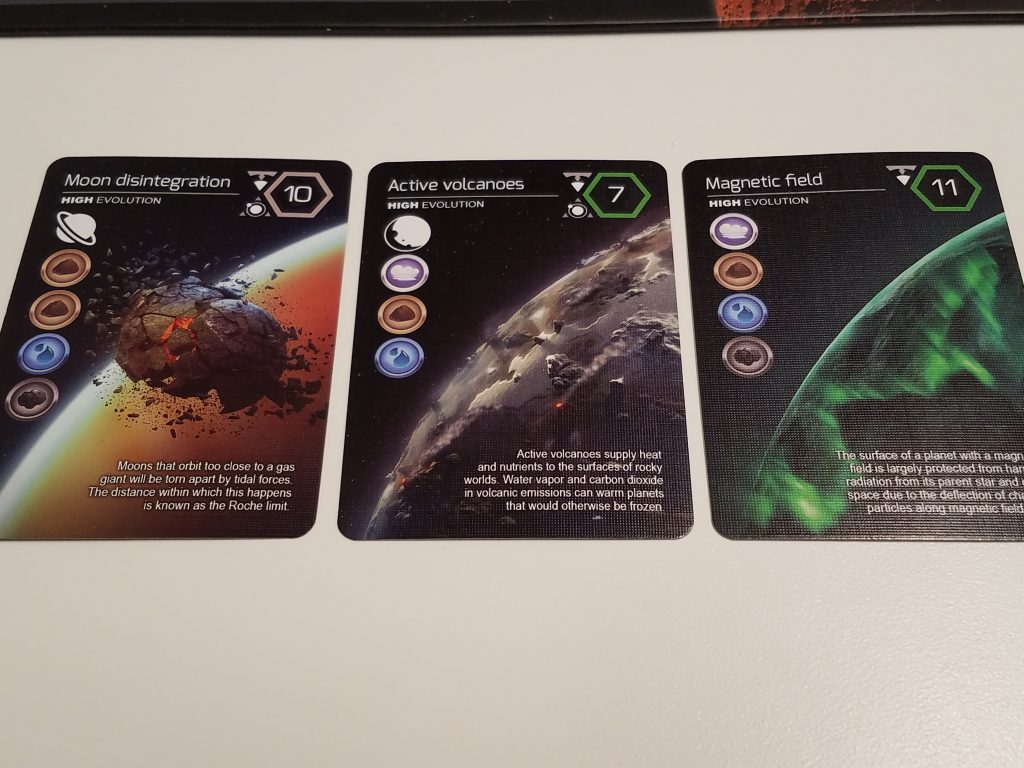 Andrew:  Of course, you have a limited hand size, so if you grab too many Final evolutions too early, you’ll end up choked for opportunities to actually affect the planets with the low and high evolutions.  It’s a balancing act. 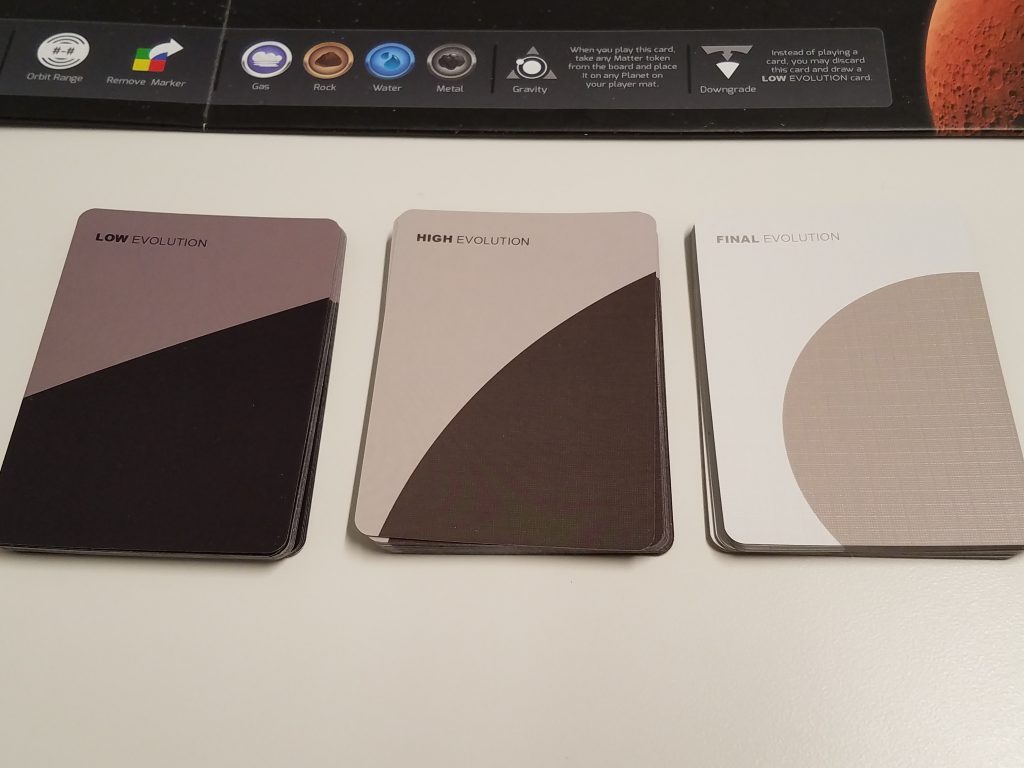 Planetarium is a surprisingly brief game.  As players use matter to affect evolutions on the four worlds, all the matter they use will be added to the game’s evolution track, the filling of which will trigger the end-game. 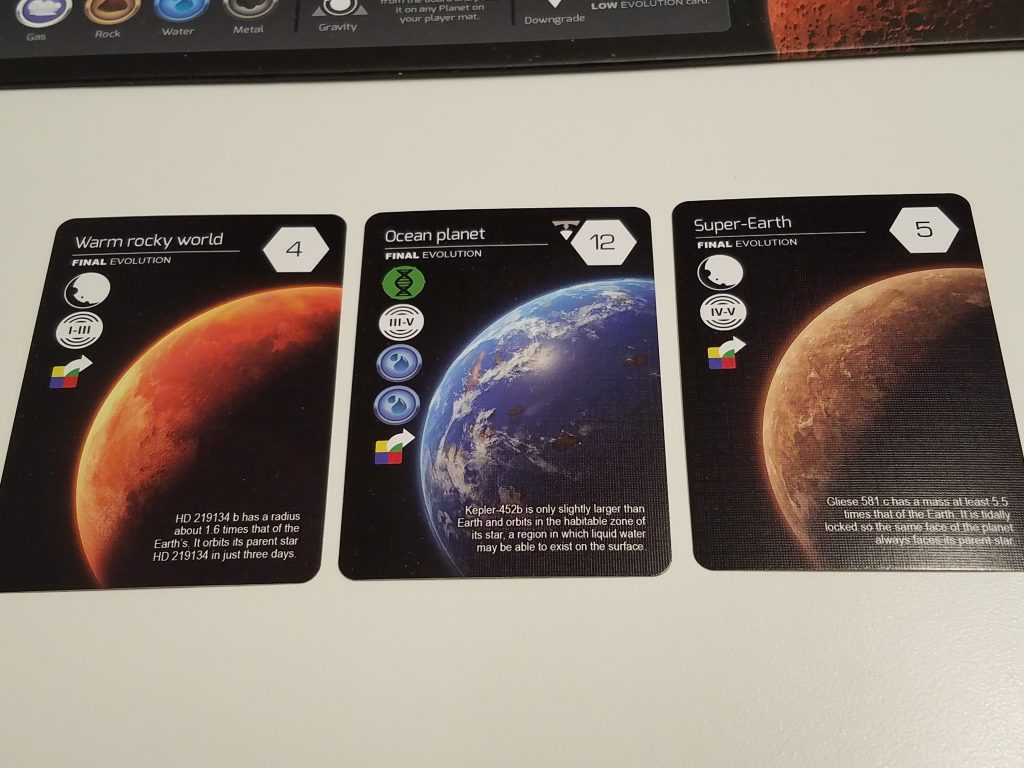 Clever players will note that the track doesn’t change length based on the number of players, so the more players there are, the more contention for affecting the planets with evolution there will be, and the harder it will be to manipulate the conditions on planets towards your final evolution cards.  For a game about the creation of a solar system, we found that Planetarium ended all at once, and things really tightened up toward the end.

Andrew:  On the whole, I have to say again that Planetarium surprised me in a really good way.  I’m not sure what I was expecting when I unpacked this austere package, but what we found in there was quite playable and a good bit of fun.

Jess:  I agree, though I think ‘austere’ really only describes a certain aesthetic simplicity – the art on the evolution cards is gorgeous and the board is really functional despite the huge number of orbits and tokens that scatter across the thing.

Overall, we found Planetarium to be a clean, enjoyable experience; attractive in its abstract way, and easy to engage.  Without over-complicating itself, Planetarium provides a solid bit of gameplay, built around a delightfully scientific theme, that will really resonate with some players, and is totally worth checking out.