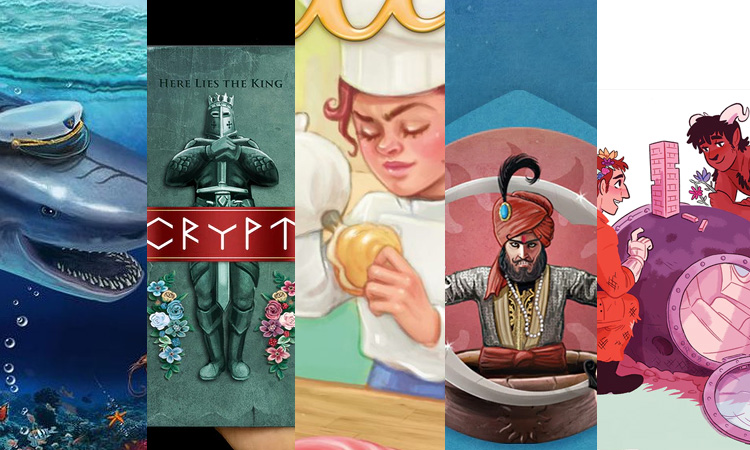 I have the con crud, but that shall not stop me from enjoying a nice perusal of Kickstarter. Here’s some fun projects I found on my stroll.

Dr. Finn showed us a prototype of this new expansion and it really does add a lot to Let Them Eat Shrimp (Which is a fun tile placement game). This project gets you a chance to pick up the base game (if you don’t already own it), the Shark v. Squid expansion,  and 2 promo packs: Fish Friends and Swim Alone.

Fish Friends adds 5 special cards with different powers. At the start of each players turn they can use one of the cards for their power and turn it over, making it so that the next player will not have that option. Once all the powers have been used, the cards flip back over, ready to be activated again. Swim Alone is a solo-variant for Let Them Eat Shrimp where you must try to survive for 5 days in the ocean. Your tile placements are determined by cards making the game much more puzzley. I really like the Fish Friends expansion as it adds more depth and strategy to the game. Reel in a copy of the Let Them Eat Shrimp: Fish Friends Expansion on Kickstarter here.

Who knew grave-robbing so could be so light and portable!  Crypt is a 1-4 player dice-placement/set-collection game made to fit into a tiny box. the basic idea is your relative has died, taking all their precious treasures with them instead of bequeathing them to you as promised. You and your siblings have decided to raid the grave for the loot. 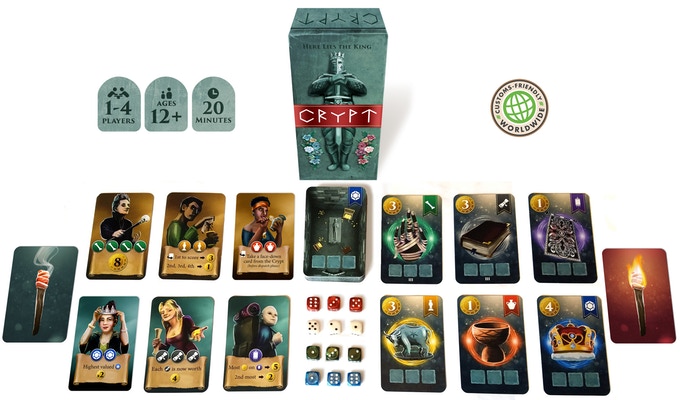 In Crypt, your servants (dice) will be doing their best to claim treasures for you. To claim you’ll need to place a die on a treasure using any face of the die you choose. Higher value dice can push out lower value dice, giving you control of the card so placing a high vale early can protect your investment, but it is also a risk. The higher the value of the die, the more likely you will “exhaust”  as after all players have placed their dice, everyone rolls. If you roll less than the value you used to claim, you lose the die. Crypt looks like a fast, fun game to bring along to game nights or when travelling. You can delve into the Crypt campaign on Kickstarter here.

Here’s another quick, easy to learn game that’s sure to please! Filler is a 1-5 player deck-building/set-collection game about filling pastries. I’ve played the prototype of Filler and had a delicious time with it. 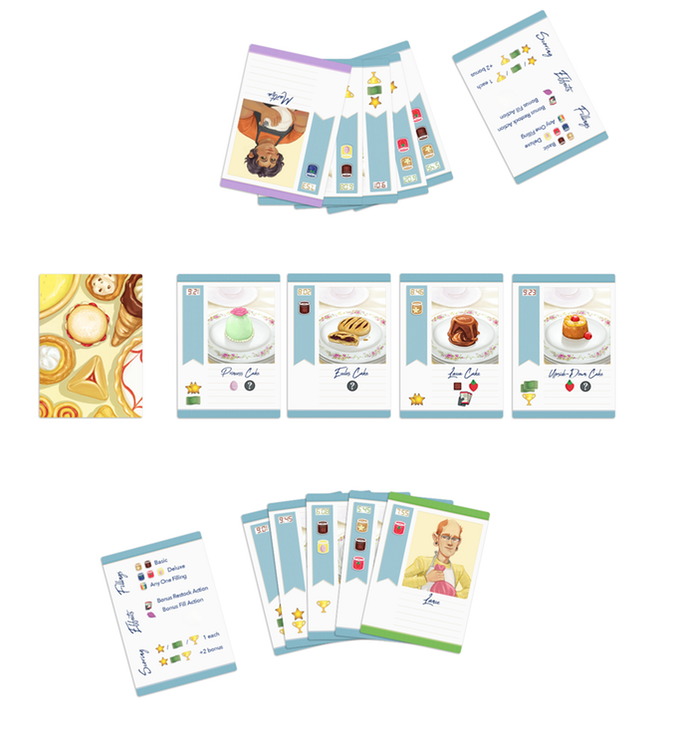 The basic idea is that you’ll have a hand of cards with different fillings on them. You can play those fillings to pick up pastry cards that will get you points , abilities, and (most importantly) more fillings! Each card also has a time indicated on it and at the start of each turn you will play 1 card from your hand for its indicated time. Whoever plays the earliest time gets to be the first player.

The game is light, fast, and perfect for new players and families. It does a great job at introducing the ideas of deckbuilding and bidding without overwhelming the players with too many choices. Get a taste of Filler on Kickstarter here.

If folk tales have taught me anything, it’s that it’s okay to steal from a jerk. In 40 Thieves a dishonest merchant has piled away wealth beyond imagining and it is up to you to rob him blind! The players will compete to see who can steal the most sapphires and be named the king of thieves. 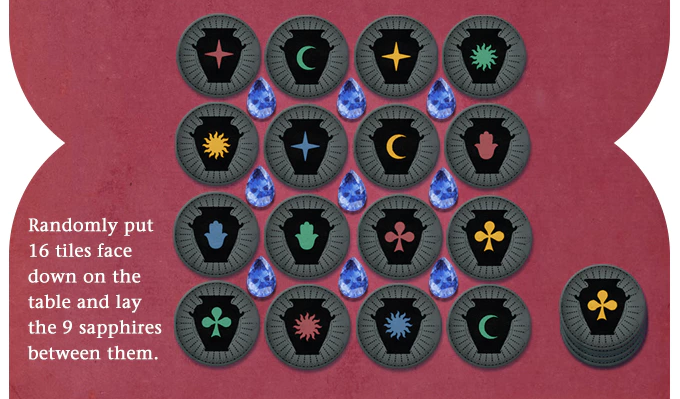 The board is created out of circular tiles and sapphires. To steal, you must surround the sapphire or create lines of cards with with matching symbols. This is easier said than done as the information you need is hidden on the bottom of each card. On your turn you’ll get to take a peek at one card and then switch out one of the cards on the table with one from your hand. Once you are reasonably sure you’ve created a valid line, you can flip the cards over to see if you are correct. If you are right, you can steal the sapphire and if you are wrong you’ll get an evil eye which are negative victory points. Once all the sapphires are gone, the game ends and whoever has the most points wins! 40 Thieves seems a brain-burning memory game with a gorgeous look. Steal a glance at the campaign here on Kickstarter.

I love 2 player roleplaying games where both players get to be enjoy the game on the same level instead of just one person being the story-teller and the other the player-character. In Star Crossed, the players take on the roles of characters who are falling in love, but the universe is working to keep them apart. 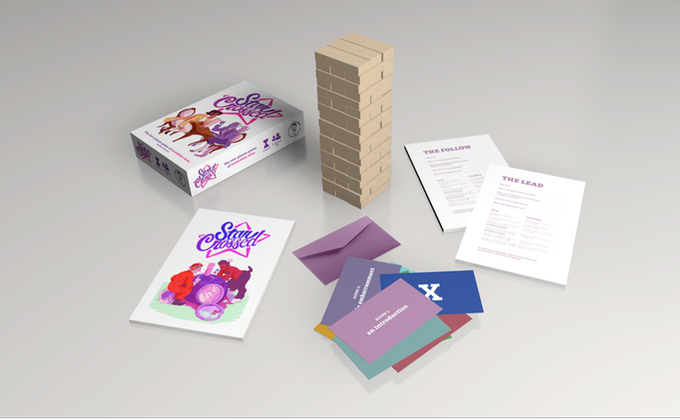 This Jenga-based, Romeo and Juliet drama plays out over a series of scenes where players will need to pull bricks whenever they do something to increase the attraction between the pair. If the tower falls before you get through all of the scenes, then the characters act on their feelings and, depending on your previous decisions, you’ll find out wheat happens to the relationship. This game strikes me as unique and thrilling in that way a first crush makes your heart go pitter-patter. See if you develop a crush on Star Crossed on Kickstarter here!

Which games have got you excited this week? Anything on Kickstarter that I should check out? Let me know in the comments below!