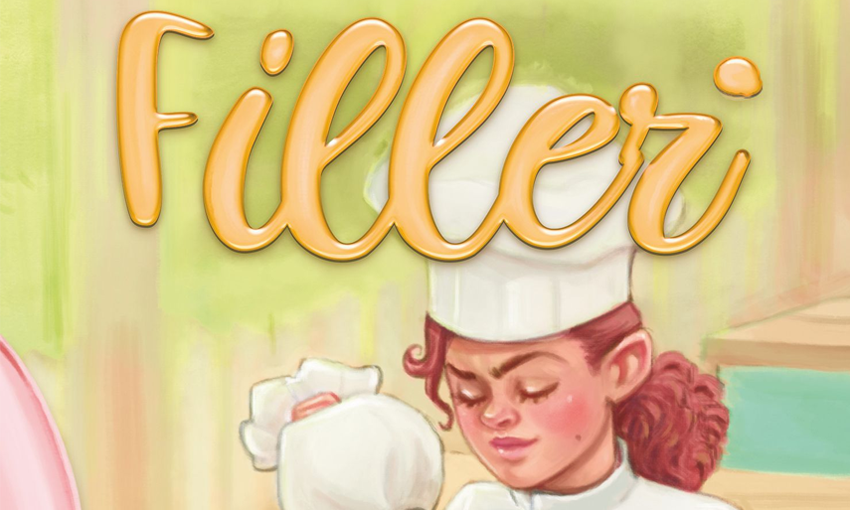 Filler is a delectable little melange of hand management, set collection, and deck building that is as accessible and satisfying as it is quick and fun.

I’m not sure what sort of packaging Green Couch Game’s latest Kickstarter project will eventually come in (though I suspect it will be their signature slim 2-piece box), but I can think of no game which is more aptly summed up by the phrase ‘exactly what it says on the tin’.  Filler couldn’t be more, well, filler if it tried, with the double entendre of its title indicating both its status as a light-weight game intended for play around (or perhaps between) deeper, heavier games, as well as its bakery-centric subject-matter.

Jess:  Not that we’re complaining, mind you!

**Kickstarter Prototype Alert! – All images either prototype or stolen from the Kickstarter!**

In Filler, the players are pastry chefs who will compete to score the most points by filling orders and seek to be crowned the star baker!  In practice, Filler is a set collection game with a deck building twist, combining just a few simple mechanics into a delicious, bite-sized experience. 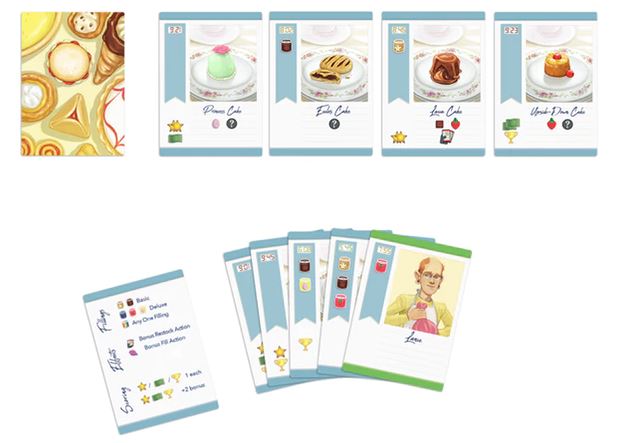 Each player will start with a unique hand of cards, and they will use these cards to fulfill orders which will add new cards to their deck.  Each turn starts with players simultaneously committing a card from their hand to declare what time they will begin work (thereby establishing turn order).  Earlier start times mean more options for fulfilling orders, but the card used to establish turn order is discarded without other effect, and the earliest start times are often on valuable cards.

On their turn, players will use their remaining cards to claim new cards from the center.  In order to claim a card, players must discard from their hand cards with ingredient symbols which meet the new card’s requirements.

If a player can’t (or chooses not to) claim a new card, they will pick up all their discarded cards and start the cycle once more.

Some cards have one (or more) scoring icons, each representing good reviews, sales, and critical acclaim.  Each one of these icons adds a point for the player who holds them, and each set of three unique icons gives even more points.  Gameplay continues until the players have exhausted the deck of cards, at which point they add up their scores and a head chef is declared!

Andrew:  Ok, so like we said at the top, Filler is, well, a filler.

Jess:  Through and through.  With 2 players, we blitzed through it in under 10 minutes, and more players didn’t significantly extend the gameplay for us.  But I liked it!  The mechanics are easy to grasp, and I love an accessible set collection game.

Andrew:  I totally agree.  Filler is a winner for me because it does exactly what it sets out to do, and does it well.  And I can’t wait to see the final art – I think it will look fantastic, too.

Is Filler empty calories?  Well, yeah, sort of.  But like any good treat, it’s not too filling, and it makes up for any lack of depth with smooth, intuitive mechanics and quick, fun gameplay.  This one’s a no-brainer; Filler is the sort of game you will throw in your backpack or purse or briefcase and play anywhere with basically anyone.  Everyone’s collection’s got room for some Filler.

We think Filler is another delightful title from Green Couch Games, and wholeheartedly recommend checking out their Kickstarter!

(Gameosity received a preview copy of this game, with the right to request a final copy.  We were not otherwise compensated.)