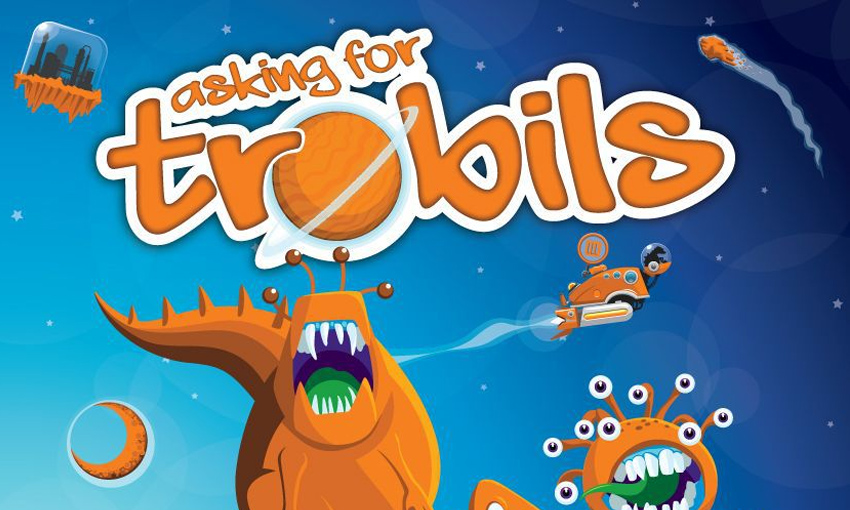 Asking for Trobils is a really clever take on worker placement, letting players improve the efficacy of their placements as the game goes on.  In this re-print of a Kickstarted original, the replacement of some wooden components for cardboard can be forgiven in light of the visual overhaul and increased availability.

One of my favorite genres of games is worker placement.  You know the kind, where you have a few meeples or tokens or whatnot which act as your agents for the round, and you can deploy them to various spots on the board in order to either create or convert resources, fulfill requests, generate points, etc., which form the core DNA from which nearly every worker placement game is fabricated.  What makes one worker placement game stand out from another is usually how interesting the loops of your activities are, how engaging the designers manage to make the basic process of ‘gather, exchange, profit, repeat’.

Andrew: What makes Asking for Trobils a success in this endeavor is its unique take on how it lets players customize the consequences of their placements.

Jess: I thought the big thing about Asking for Trobils was the color orange.

Andrew: Yeah, I can see how you’d get that. 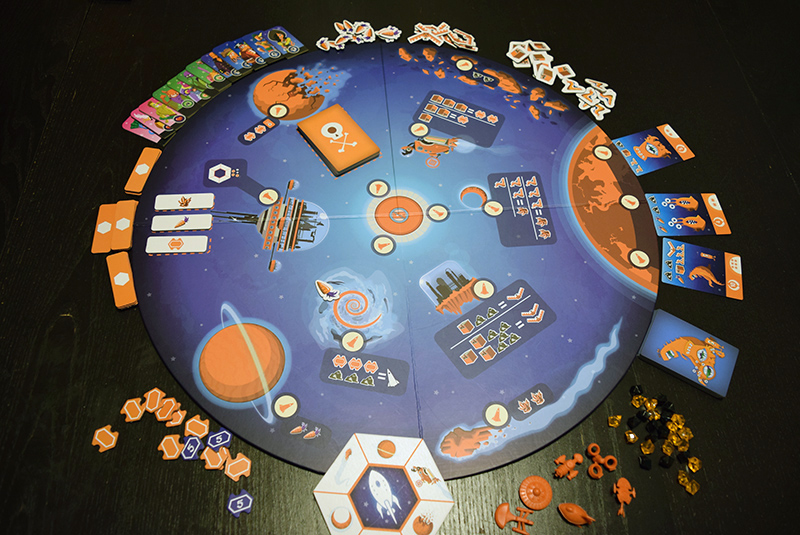 In Asking for Trobils, the star-system O-Renj (hah) has a problem.  That problem are the Trobils – space-vermin who delight in doing things like drooling, making loud smacking noises when they eat, destroying planets, and generally making a nuisance of themselves as they swarm over Planet Paradise. 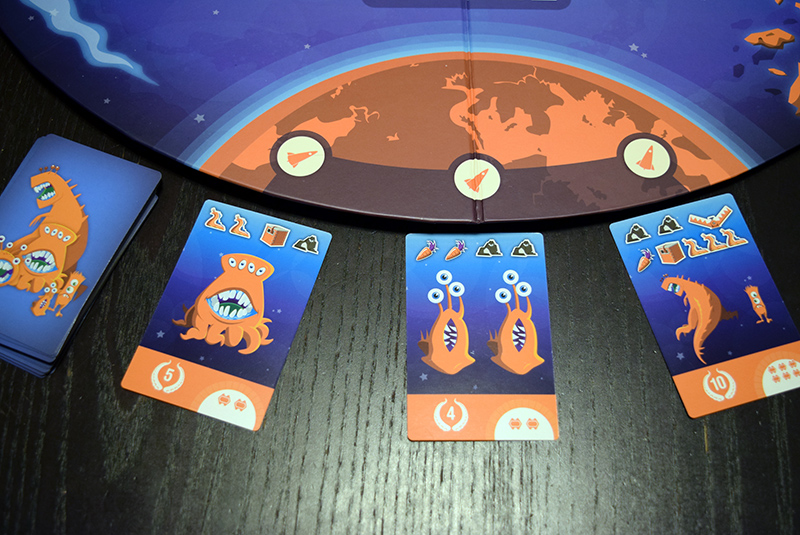 That’s where you come in – as a Trobil Hunter, your task is to round up these undesirables and get rid of them.

Jess: By which we mean toss them into the sun! 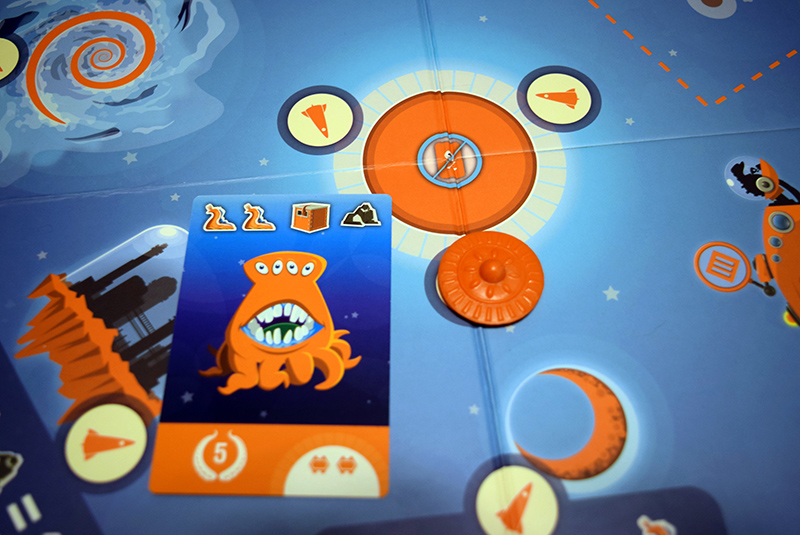 The bulk of gameplay in Asking for Trobils will have you dispatching your fleet of ships to different locations around O-Renj.  Players don’t block each other’s ships, but when you ‘bump’ another player off a space, you’re actually helping them because they won’t need to spend a turn gathering their fleet back up. 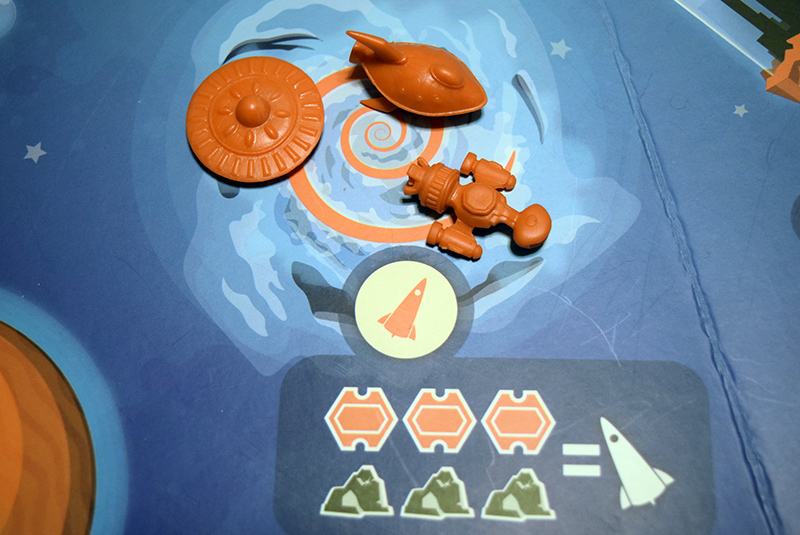 The placement spaces are straightforward enough.  Some produce resources used for catching Trobils (apparently they love carrots), while others let you make deals with local mercenaries in order to gain board advantage, and of course there are spots to catch Trobils and dump them unceremoniously into the sun. 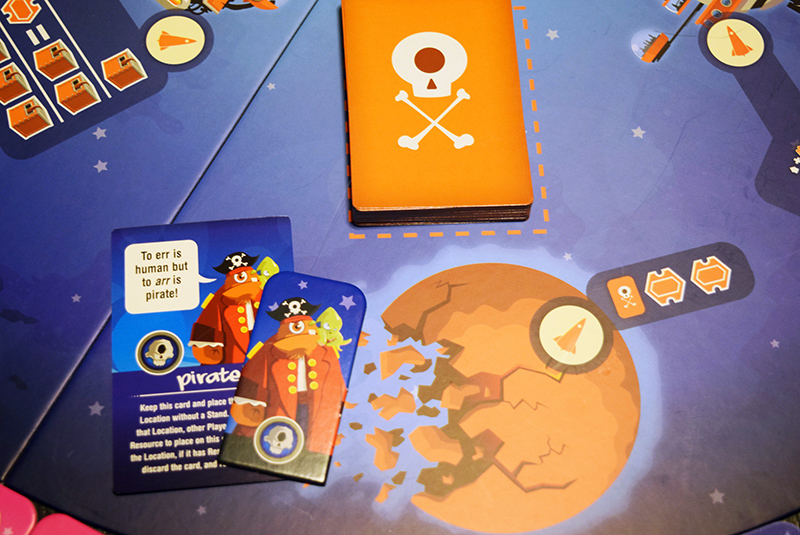 Jess: I love the art on the mercenaries (I love the art in Asking for Trobils in general), and I think the traps you need to concoct to catch all these Trobils are delightfully silly.  A few carrots, some steel jaws, a slug or two…kinda tells a story all on its own!

But our favorite spot on the board is this one, right here – O-Renj Station. 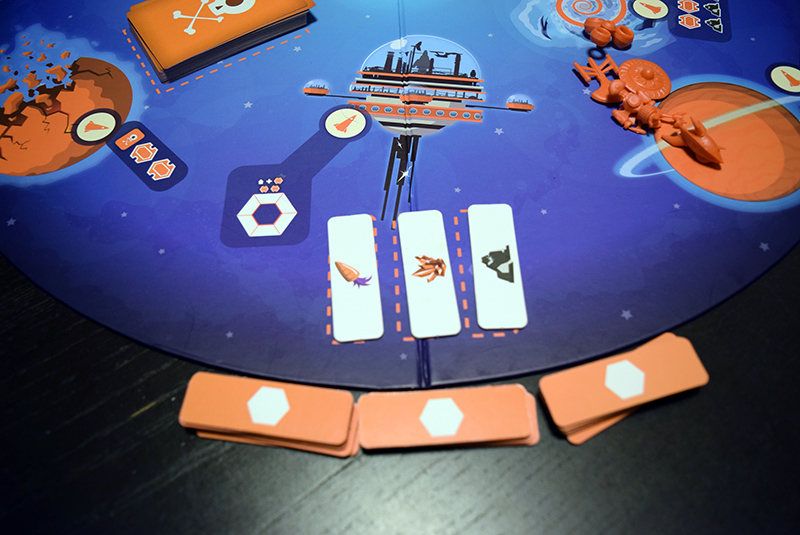 Now, this is where Asking for Trobils gets really interesting. Each player can purchase ‘connections’, unique upgrades which they can use to upgrade their own fleet of ships.  It works like this – buy a connection and attach it to one of the sides of your ship marker.  Like so: 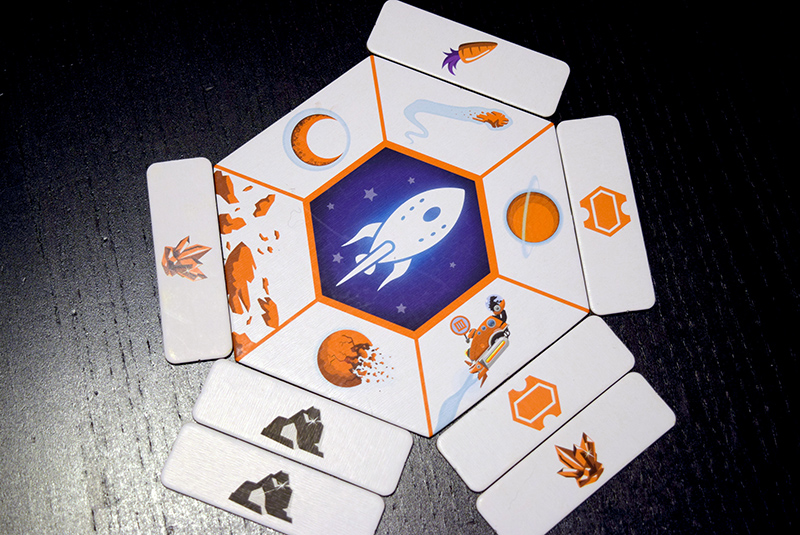 From then on, whenever one of your ships is placed at that location on the main board, you get all connected resources in addition to whatever that spot usually generates.

Andrew: So here’s where Asking for Trobils gets brilliant.  The ability to upgrade and customize your fleet, not just multiplying the effect of your placements but giving you the opportunity to diversify, adds a really fantastic ramping action to how the game plays. 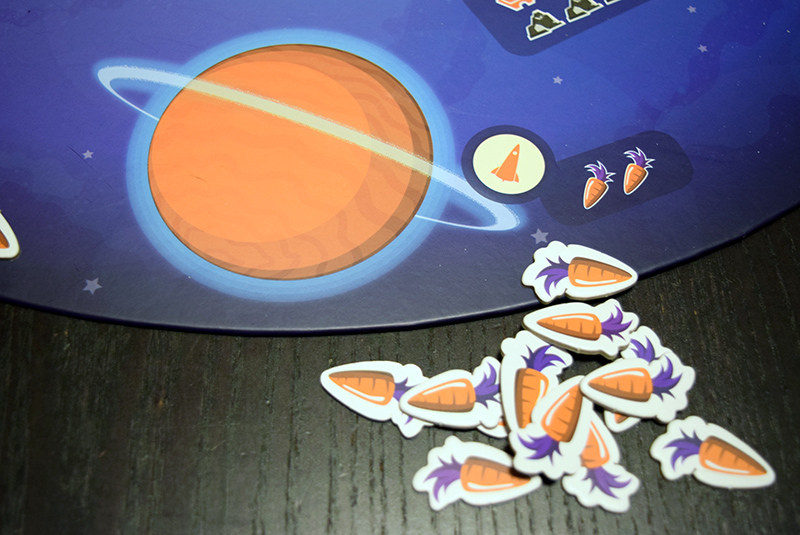 Jess: Absolutely!  At first, you’re making small moves – grabbing some carrots here or some crystals there, and catching your first few Trobils is probably going to take a lot of work.  But as the game proceeds and you upgrade your fleet, each placement gets more and more powerful, letting you make bigger plays and swing for bigger and bigger payoffs.  It’s awesome! 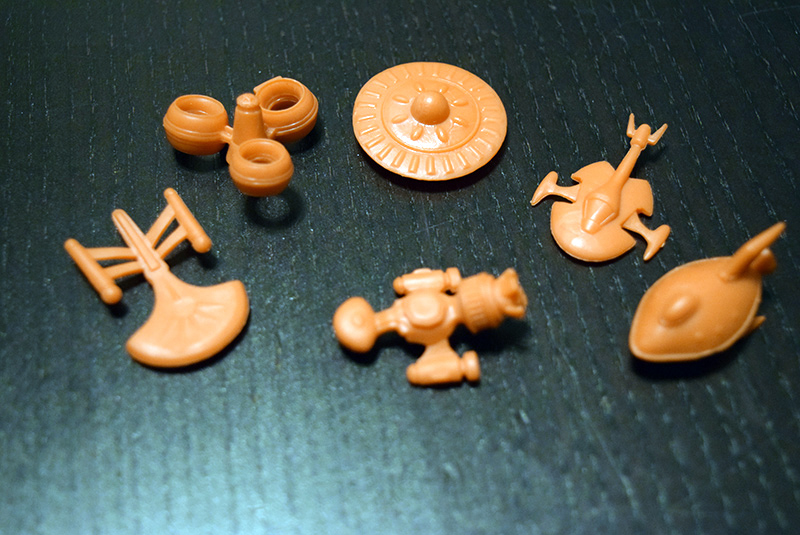 Andrew: Not only that, but the consequences of bumping players takes on more weight the more connected their fleet is.  Those free moves you give someone when you displace their ships suddenly mean more if they are collecting 3, 4, 5 resources each time they hit a location.  I love that!

The mechanical elegance of Asking for Trobils has as its odd counterpoint the game’s aesthetic presentation.  While we don’t have a copy of the Kickstarted original on-hand, the differences between it and the Breaking Games version we’re reviewing are aesthetic.  For one thing, additional colors have been introduced to the board.

Jess: Yeah, for whatever reason, the original game was absolutely fixated on the color orange, so much so that there was a side of the board where it was the only color used.  The Breaking Games version does away with that and introduces some graphic updates that, as far as we’re concerned, make the game a bit easier on the eyes.  But there’s still plenty of orange to be had!

Andrew: Additionally, some of the wooden bits from the Kickstarter were replaced with cardboard punchout tokens, but honestly, we don’t find ourselves missing the originals much – the tokens are visually distinct and easy to use, so that’s fine. 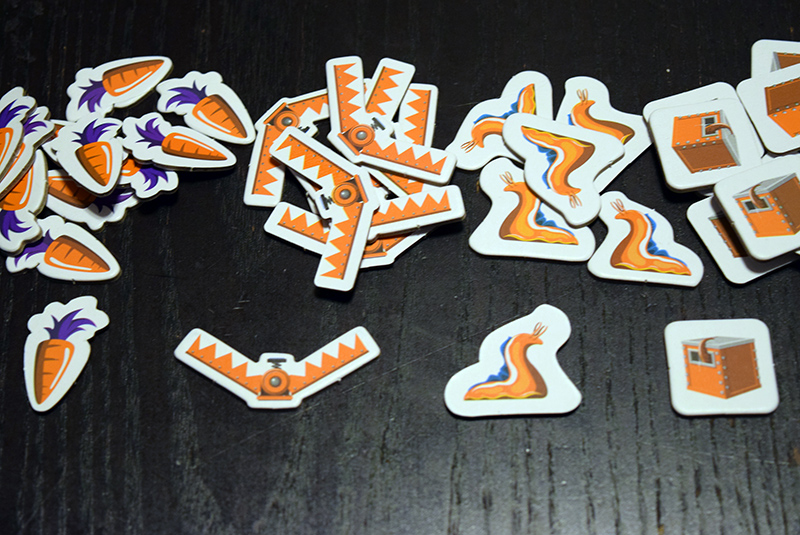 All in all, we absolutely love the core mechanics of Asking for Trobils.  Between the bumping mechanism and our ability to customize our fleet of ships, each play of Asking for Trobils feels a bit different than the last.  While not a complex game, the options available to the Trobil Hunters are distinct enough that it rarely feels like there’s no good option on the board, which keeps the game flowing nicely.  We’re glad that Breaking Games brought this niche Kickstarter project to a wider audience, too, and actually appreciate most of the production changes they introduced. 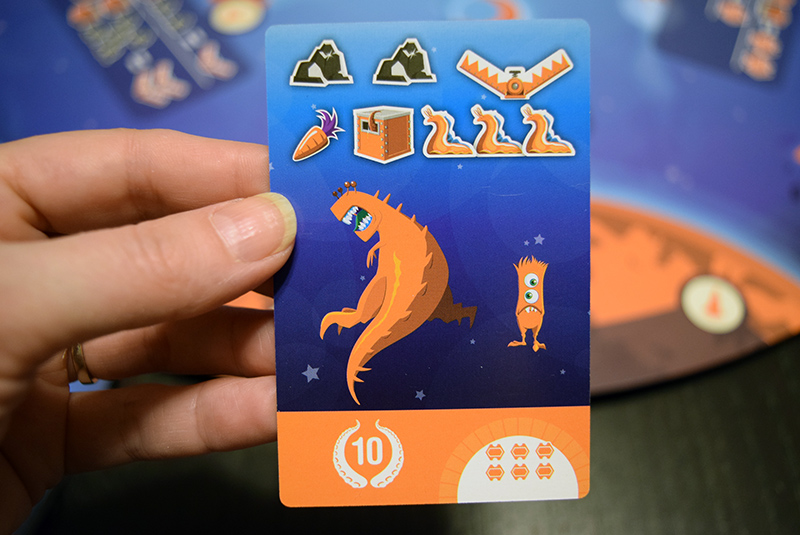 Asking for Trobils is a really unique, refreshing take on a well-trodden genre.  For people who love worker placement, this one’s an absolute keeper, and we think it’ll make for a fun introduction to folks who might not enjoy heavier, more fixed-form examples of the style.  Catch yourself some Trobil today!

One thought on “Asking for Trobils Review”