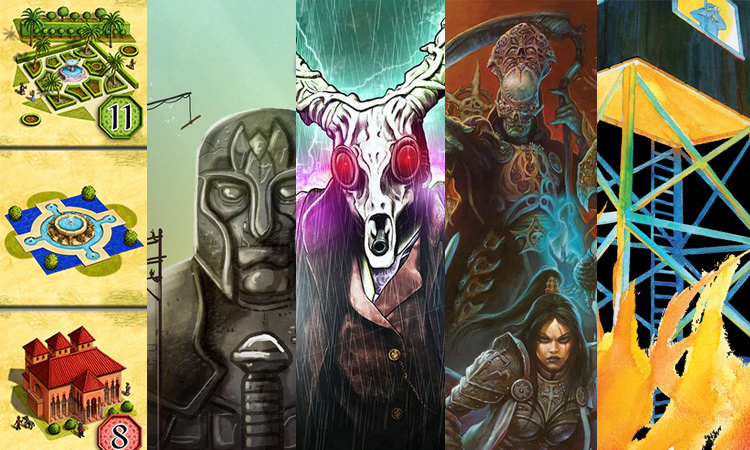 Ok, I’m not a poet, but I am loving these Kickstarters! 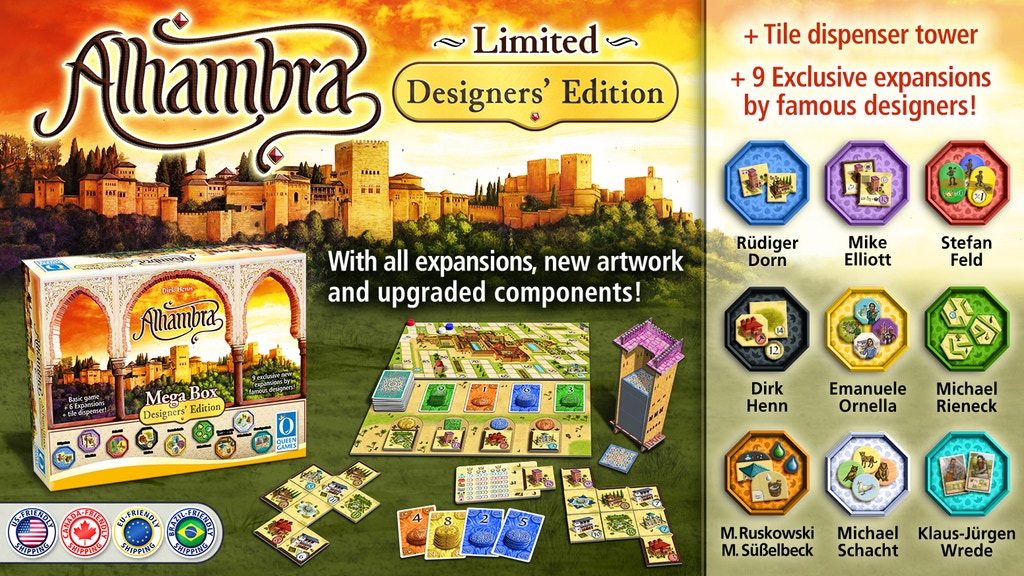 Dirk Henn’s Alhambra is an award winning tile-placing game about building up your palace/fortress. The original game has six expansions and several stand-alone games based on it. That’s a lot of game! This new edition is perfect for the collector who wants it all in one place or for someone who hasn’t picked up Alhambra themselves yet, but is really keen on the game. 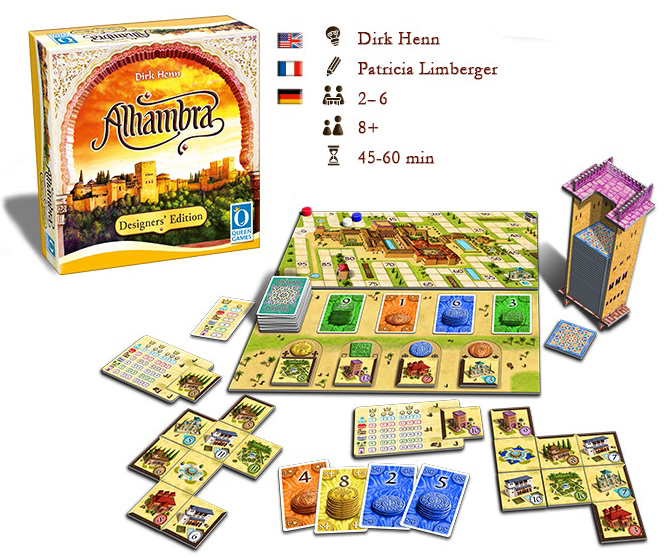 I really enjoy the base game Villages of Valeria and this expansion pack adds an exciting new set-collection mechanic: Landmarks! Now when you would normally follow a players turn, you can instead, build a landmark in your village. The player with the most of each type of Landmark will earn victory points and if you manage to make sets of all five you get bonus points! Points galore!

As this expansion adds a bunch of new cards and tokens and now is more than the old big box can fit, Daily Magic Games decided to make a new big box that can hold everything. This kickstarter is a great way to add even more value to your Villages of Valeria game. if you don’t already have the base game, you can pick it up in the campaign as well. Check out Villages of Valeria: Landmarks on Kickstarter here!

The Faceless is a co-operative/hand management game about children facing off against ancient evil in order to save their captured friend (very Stranger Things-like in that way). What makes this game really interesting is  it uses a compass and magnets as part of gameplay. 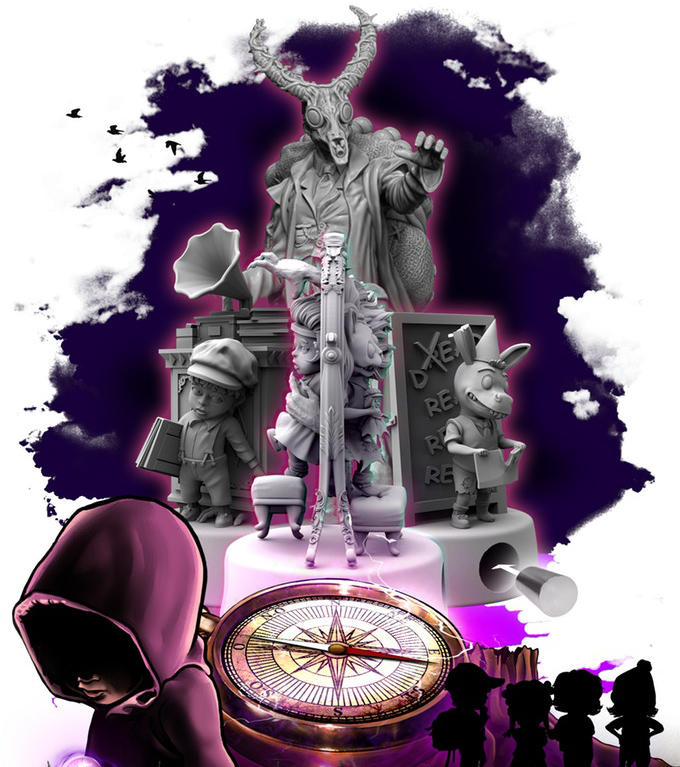 The baisc idea is that the compass represents the group’s movement. You will indirectly influence the compass by moving your pieces around the edge of the board. The piece’s internal magnets will pull at the compass needle thus changing it’s direction. The evil Billy Goat, your enemy, also has a magnet and will complicate your lives as it moves around as well. This is a really unique mechanic for a game and I’m really curious to see how it actually plays. You can learn more about The Faceless here on Kickstarter!

Court of the Dead: Mourners Call Board Game

Ok, let’s talk epic story-line here people. Court of the Dead: Mourners Call sets you as one of the “Mourners”, beings that work for the lord of Death; collecting the souls of the casualties of a war between heaven and hell. Death is apparently a pretty noble guy and want to stop all the ruckus with a rebellion, setting the world back in balance. It’s your job to earn the most favor with Death and become part of the Underworld elite; winning the game. Wow, that’s a lot of pressure no? 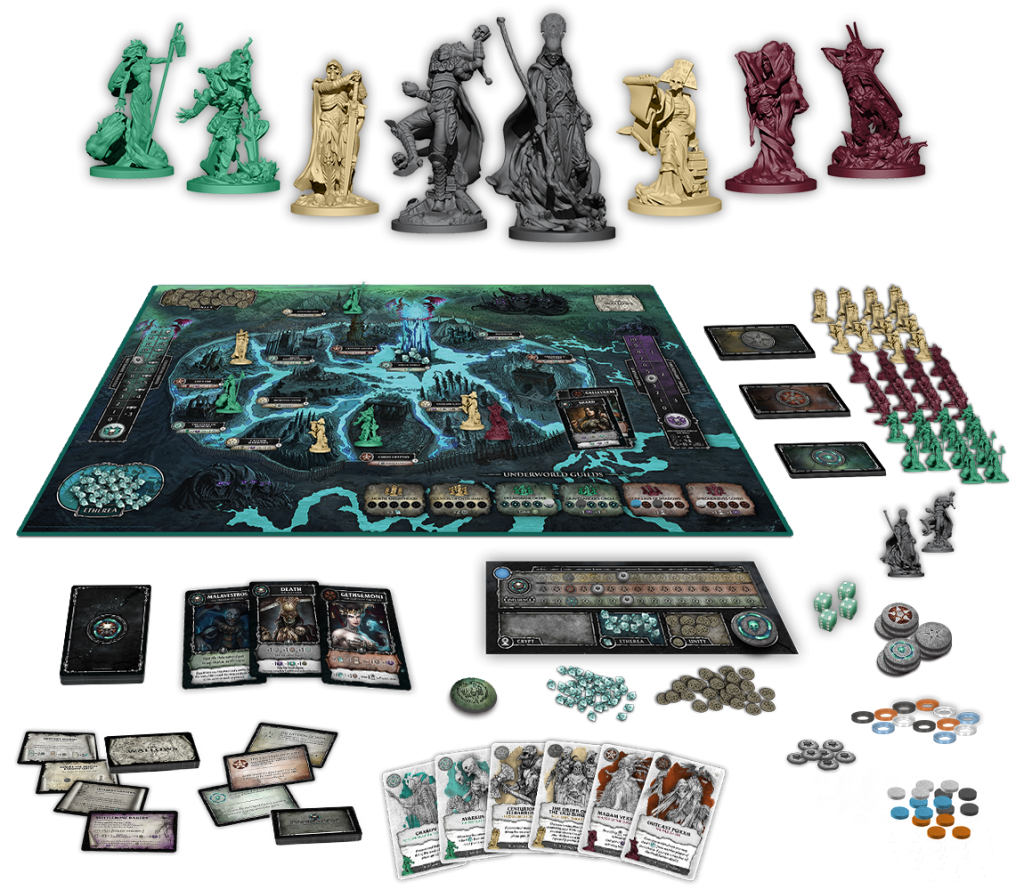 Court of the Dead: Mourners Call is a 2-5 player area-influence game where you must balance the good of the underworld with achieving your own goals. I am loving on the theme, the art, the minis, the…well, everything! This looks like it is going to be a really fun mix of co-op play and worker placement. Go check it out on the Court of the Dead: Mourners Call Kickstarter campaign!

I tried out Fire Tower at PAX East earlier this month and it is a vicious tile-laying game where each player is looking to be the last fire-tower standing during a blazing forest fire. They do so by fanning the flames towards their opponents. 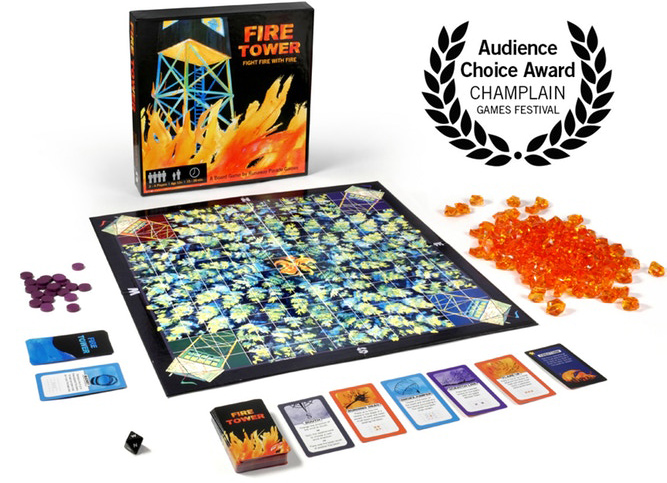 I find the theme a little disturbing and fantastic at the same time. If you think about it, instead of putting out fires or warning people, these vindictive fire-towers are encouraging the flames to spread. What did these towers do to each other? It must have been one hell of a falling out!

The game plays like this: Each turn you will first have to expand the fire by placing one fire token on the board in whatever direction the wind is blowing at the time. The you’ll be able to play an action card which let’s you do things like change the wind direction, add more fire tokens, and protect your tower. It is a brutal tower-offense game that really satisfies your inner arsonist. Learn more on the Fire Tower Kickstarter page here.

Which Kickstarters should I check out next? Let me know in the comments below!