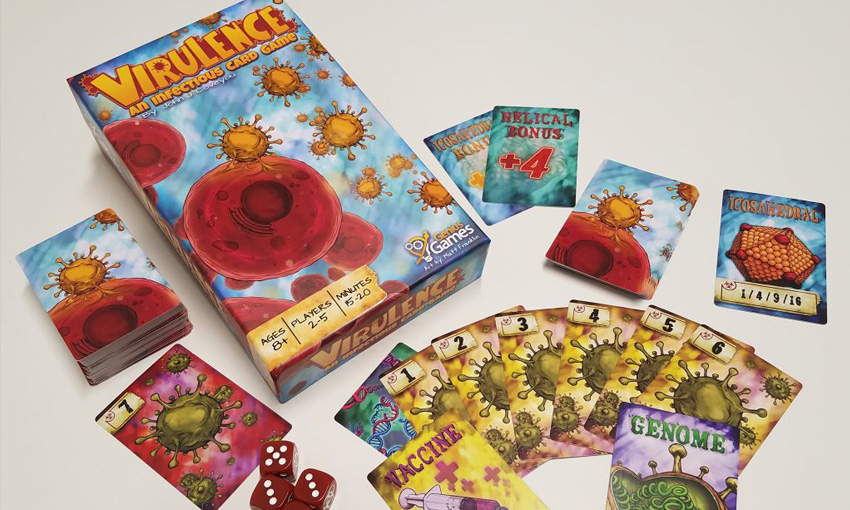 The latest game in John Coveyou's 'Games about actual science things' (a name we made up), Virulence: An Infections Card Game is a smartly-designed set collection game with a clever mechanical core and a really neat theme.

Ok, I’ll be honest – viruses kinda scare me.  Studying them for any length of time reveals them to be efficient, effective, and incredibly creepy.  Heck, it’s part of what makes games like Pandemic so terrifying.  But what if, this time, it was you doing the infecting?  Well, in Virulence: An Infectious Card Game, designer John Coveyou does just that, pitting virus against virus in a game of mutation, infection, and recombination!

Josh: Ok, but theme aside, what we have here is a set collection/trick-taking hybrid.

Andrew:  Yeah, like some sort of genetic mutation of both genres!

Jess:  Like some sorta mad scientist created a mutant virus strain in order to trigger the zombie apocalypse!!!

Josh:  That’s not a thing!  This is a game about science!

Andrew:  Wait, didn’t you write, like, two books about the zombie apocalypse?

Each player starts with a deck of identical cards, 1-6.  The players will use these cards in the trick-taking segment of the round, which is used to determine the order in which players will draw cards from the viral deck.  Each time a card is played it is discarded, and players will either need to burn through all their cards or spend a whole turn picking up their discards.

Each round, enough viral cards are flopped out so that every player can draft one (2 in a 2-player game).  All players select a card from their hand and then simultaneously reveal them.  Using dice to break ties, each player will draw a viral card in the order established by the card they played.

Andrew:  This is the core mechanic of the game, and I like the simple decision-making here.  You need to assess the value of the cards on offer, not just for yourself but against what your opponents might be angling toward.  Do this well and you’ll have a much easier time picking the right card from your hand to play.

Some of these viral cards get added directly to the player’s deck (always replacing a card so that each player has the same total number of cards to play.  These cards mean that, as the game goes on, players will begin to have divergent card sets.

Other cards from the viral deck are scoring cards, each of which sit face-up in front of their player and score under different circumstances – some are about building sets, while others want to be the majority, and some even offer just straight points or the ability to modify your dice rolls during tie-breaking.

Jess:  Just be careful of those vaccines!  Enough of those could tank your score no matter how well you’re doing otherwise.

Gameplay continues until the viral deck runs out.  At that point, players count up their points and the most successful virus is declared!

Josh:  I thought Virulence was great!

Andrew:  I totally agree, though given how I’ve enjoyed most of Coveyou’s other work, I wasn’t particularly surprised.

Jess:  Well, I might not have been surprised that he was able to wrap a scientific theme around fun mechanics, but it’s still impressive to see him do it again and again.  I really wish I had been able to play more games like this when I was younger.

Josh:  Absolutely!  But what we may have lost in potential scientific learning at a young age, we have gained in our mature perspective on game design.  Virulence does some really clever things!

Andrew:  For sure.  My favorite aspect is how we start with the same cards, but as the game goes on, we opportunistically mutate our cards to make them as effective as we can.

Jess:  It’s really smart!  While it might seem obvious that you want to take the cards which score you the most points, the fact is that if you take advantage of any opportunities to mutate into a more powerful virus, especially early on, you’ll find yourself swimming in viral points!

Jess: I think the phrase you’re looking for is ‘kinda ugly’.

Andrew:  Heh, yeah, you’re not wrong.  Given how nicely it plays, I do wish it was a little easier on the eyes.  That said, though, I appreciate what they were going for, and that’s my one real dig against it.

As always, Genius Games has a solid scientific backing on their game design.  Though it never comes off as an ‘educational’ game, the core concepts behind viral mutation and proliferation, including the icosahedral and helical structures, spherical envelopes, and genomes, are all grounded in real science, and there’s a brief, accessible explanation of how the game’s mechanics mimic the reality of the viral life cycle.

Jess:  Wait, I thought there was some debate as to whether viruses were actually alive.  How can something that isn’t living have a life cycle?

(Gameosity received a review copy of this game.  We were not otherwise compensated)