The Neverland Rescue is a clever 2-player riff on deduction mechanics, which rarely work at that player count.  The artwork is charming and the gameplay is completely asymmetrical, giving each player a unique experience.

I have to say, if you asked me what the theme of a 2-player asymmetrical deduction/set collection hybrid from veteran designer Scott Almes would be, I think Peter Pan would be about as far from my first guess as anything (Tiny Epic Detectives, anyone?).  But I was pleasantly surprised by the artwork in this Kickstarter prototype, which Letiman Games sent our way to check out ahead of their campaign.

So come join Peter, Wendy, John, Michael, and the rest as they go off to rescue their friends from the nefarious clutches of Captain Hook!…Well, singular ‘clutch’ technically, I guess.  But here we go!

**Kickstarter Prototype Babble – Art and components not final, some stuff stolen from the KS campaign!**

From the top down, The Neverland Rescue runs like so: one player plays Peter and his band, and the other takes on Hook and the pirates.  Pan wants to rescue his friends in order to win the game, while Hook wants to ferret out all of Pan’s friends’ hideouts in order to capture them and win the game for himself. 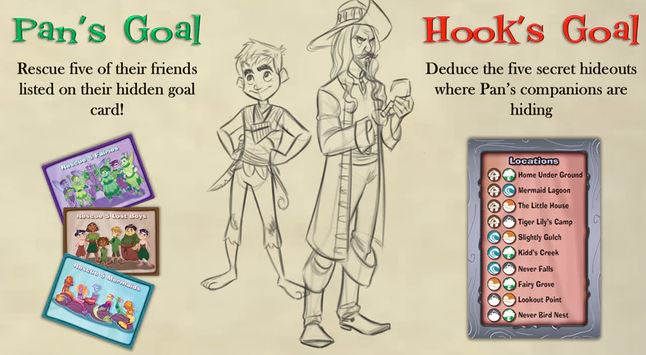 As we said before, The Neverland Rescue is an asymmetrical game, so the way the players go about their turns is completely different and makes a perfectly succinct rules summary a little challenging.  However, each turn, both Peter and Hook will assign a character to one of the three locations in Neverland. 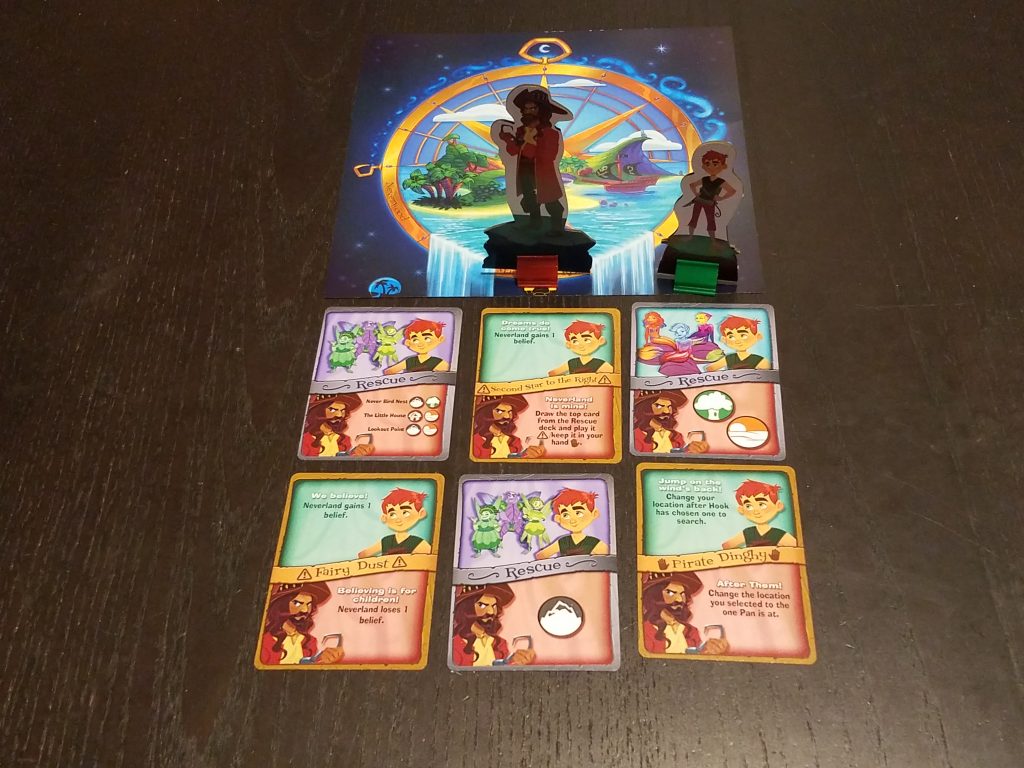 Peter assigns first, in secret, and then Hook tries to guess where Peter’s character went.  During each round, these locations will have 2 cards apiece available, and the player who goes there will get to claim these cards for themselves.

If Hook’s player can predict where Peter’s friend went, he will capture that character, limiting Peter’s future options and coming that much closer to ending the game.  However, if Peter and Hook headed to different locations, each player will gather the cards at their respective location. 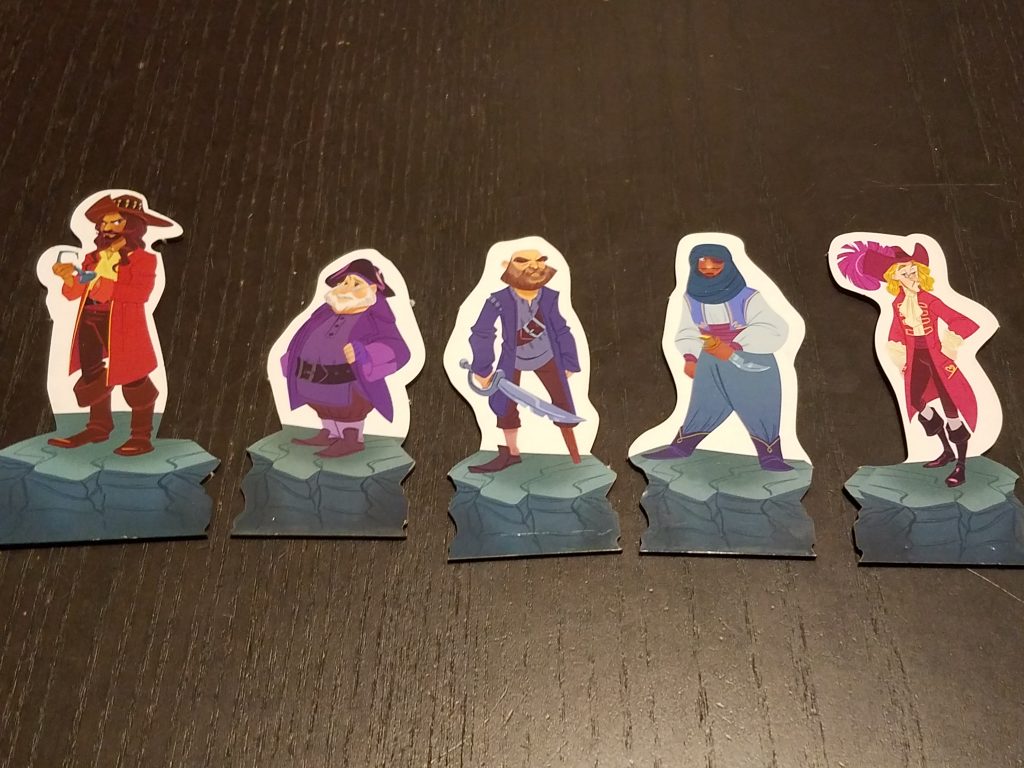 Each card is separated into two sections, one which triggers if Peter claims them and one for Hook.  Both players can collect action cards, either for immediate or eventual use, and Peter collects character cards (which contribute toward his set-collection victory condition) while Hook gets clues as to the whereabouts of Peter’s gang. 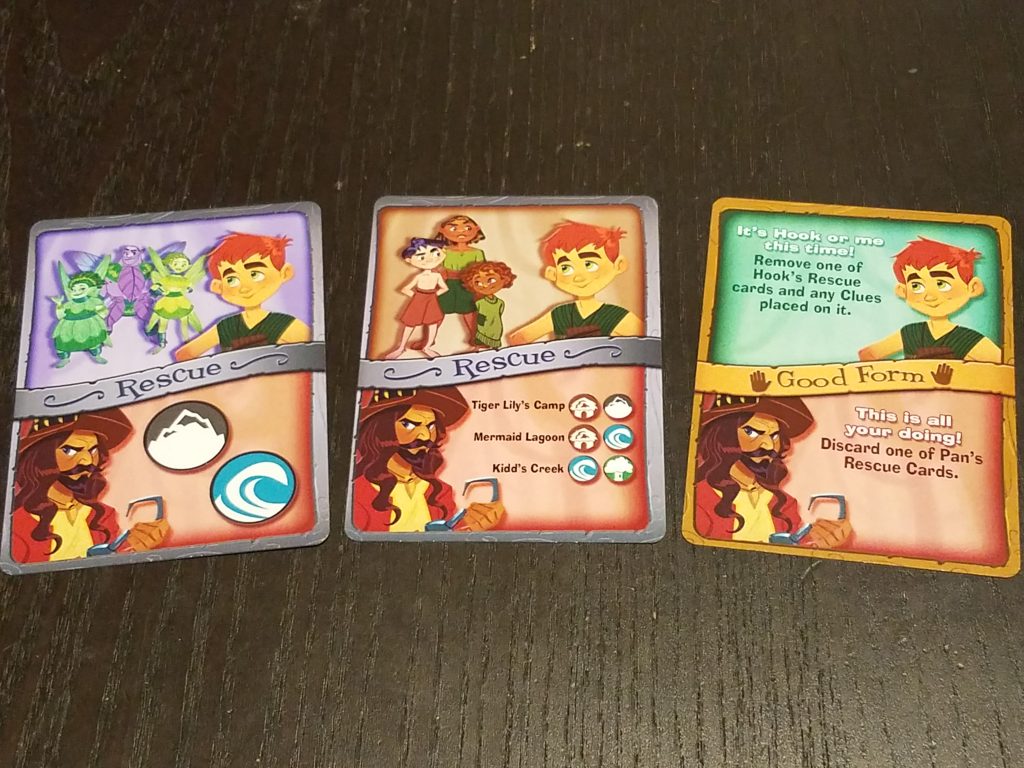 Jess:  So, this is probably an important place to stop and talk for a second about what the actual victory conditions are.

Peter’s goal is simple – if he can gather up 5 cards that show the friends who are on his secret goal card, he wins immediately.

Hook’s goal, and therefore his player’s gameplay experience, is quite a bit more complicated.  Broadly speaking, Hook is trying to raid all 5 of Peter’s gang’s hidden hideouts in order to win the game.  How does he do that?  Well, by sending pirates to grab cards, he will learn something about the attributes of the hideouts that Peter randomly drew at the beginning of the game.

Each hideout is described by a combination of two symbols, and with each location card Hook can grab or friend he captures, the more information about those hideouts he gains.  If he can successfully guess all five locations before Peter manages to rescue his friends, he will win.

Finally, either side can win if they move the Fairies track all the way to their side.

Andrew:  Ok, so I have to admit, I wanted to like The Neverland Rescue a little more than I did.  I found that playing as Peter was very straightforward, almost too much so, while playing as Hook was a bit frustrating at times. 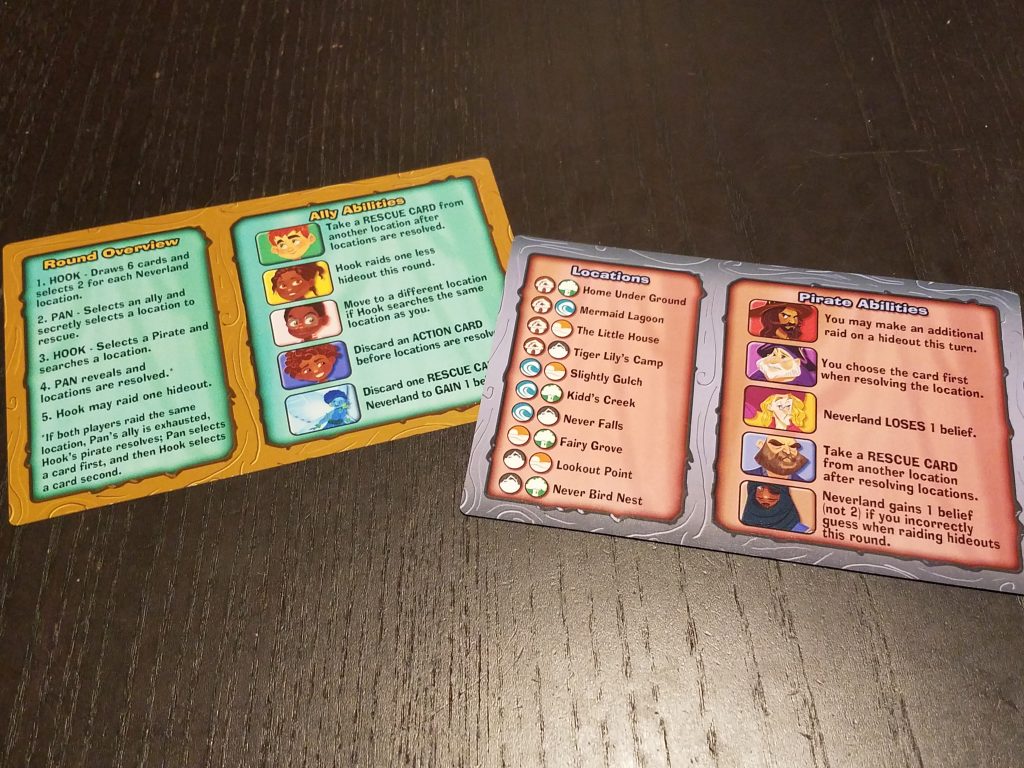 Andrew:  Yep.  A big part of the tactical side of the game is in Hook’s hand.  First he has to decide where each of the 6 location cards go each turn, in order to try and bait Pan into selecting a particular location.  Then he has to guess where Pan is headed that round and then he has to continuously try and deduce what the hideouts are.  It’s a lot of little, menial mental tasks to carry out, and I found it a little tedious.

Jess:  I played as Peter Pan more frequently than you did, and I didn’t have nearly that much to do.  Pan’s job is really just not to get caught by Hook – if you can guess where Hook will send his pirate most rounds, you can pretty much guarantee you’ll come out ahead.

The Neverland Rescue ends all at once, as soon as one player or the other manages to meet a victory condition.  Therefore, it is critical for both players to be aware of their opponent’s progress against the end-game; however, given that it’s a 2-player game, that’s not really challenging.

Jess:  I guess my real criticism of The Neverland Rescue was that it was sometimes really unclear about when cards could be played.  The timing of what triggered when, and when cards could cancel each other, wasn’t always super clear.

Andrew:  Of course, that could come down to prototype rules – it’s possible that they’ll get polished up during the course of the Kickstarter.  But all that said, one things we really dig about The Neverland Rescue is the presentation.  The art is fantastic, and even though we’ve got a prototype here, it still looks great!

Jess:  For sure!  The presentation is great and I actually really liked how different the experiences were depending on what side of the table you were.

Andrew:  That’s definitely The Neverland Rescue’s biggest strength – the game seems tailor-made for pairs of people who want different sorts of gameplay experiences.  I can imagine that Peter would actually be great for a younger or less-experienced gamer to play against an older or more skilled Captain Hook.  The different difficulty levels would allow for both sides to be engaged in different ways, making this a great game for unmatched pairs, as it were.

The bottom line is that The Neverland Rescue was fine for us; the theme and gameplay approach surprised us (in a good way), but there were aspects of the gameplay that we didn’t really connect with.  That said, we don’t think it’s a bad game, just that it may not have been for us.

However, you should definitely check out the The Neverland Rescue Kickstarter today to see if this 2-player asymmetrical deduction game is more your speed.

(Gameosity received a prototype of this game.  We were not otherwise compensated.)