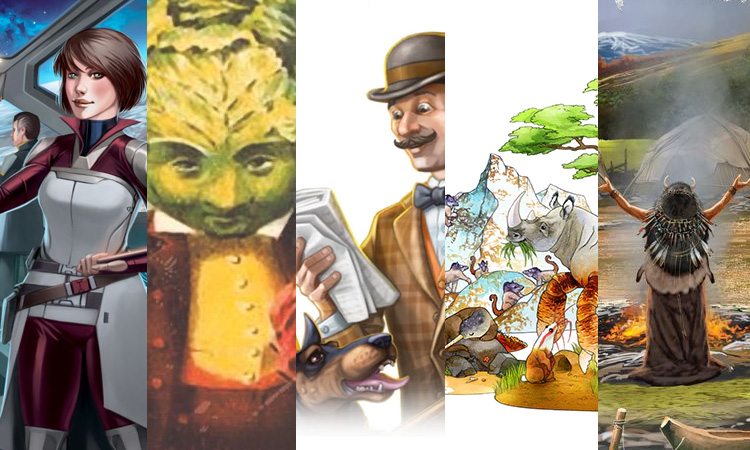 It’s Friday!!! Time to kick back and relax as you peruse the current Kickstarter projects with a heart full of excitement and an open wallet. What have I been peeking at this week? Check out my list below!

Cosmic Run is a fantastic push-your-luck, space racing game from Dr. Finn and now a new version of the game is up on Kickstarter. A lot has changed between the two versions: Cosmic Run Regeneration offers you a tri-fold board with a new 6th planet, meteors are now controlled by cards instead of dice, there’s a new alien race and alien cards are now one time use, the base, solo and co-op games now have improved rules, and more. 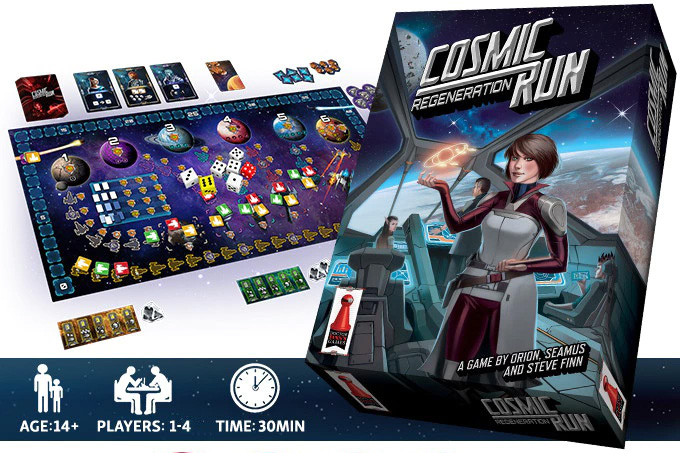 I’ve had the pleasure of trying out the new game and it is a whole lot more fun. For anyone who’s never played Cosmic Run to even the big fans, I think this will be the definitive edition. Hop in your rocket and fly on over to the Cosmic Run Regeneration Kickstarter here for more info!

Ok let me say this right up front: The anthropomorphic vegetables are …slightly disturbing…

Mr. Cabbagehead’s Garden is a vintage-looking game for 1-2 players about trying to protect your vegetable garden from thieving neighbors. 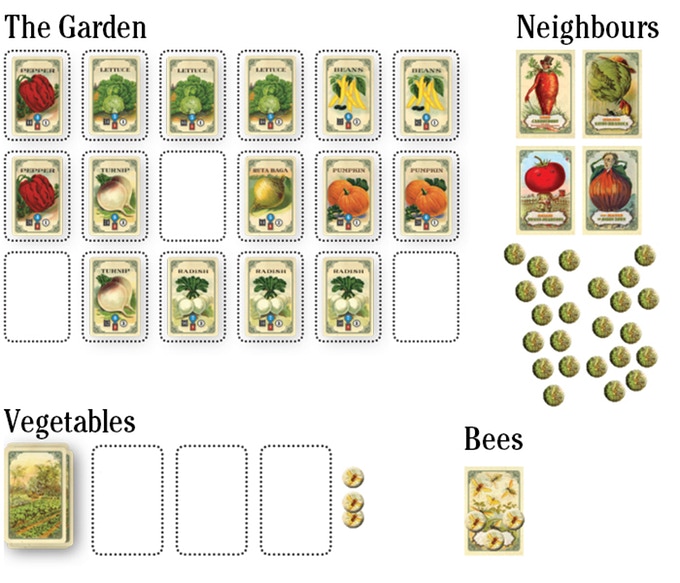 Every turn you’ll be choosing 1 of three cards to plant in your garden and paying it’s positional cost (I kinda love that the currency here is bees. it totally plays into the quirkiness of the game). Afterwards your neighbors will start messing with your garden. Which neighbors pop in will be dependent on the cards you do not plant, so balancing which veggies end up in your plot is crucial to the strategy. You’ll tally up a score at the end of the game based on vegetables planted, merit awards earned, and which veggies got tossed for compost.

Mr. Cabbagehead is going to haunt my nightmares, but I think his game will be quite fun. Check out Mr. Cabbagehead’s Garden on Kickstarter here.

Penny Lane: A Charming Game of People and Pennies

The people from Mint Works have a new game up on Kickstarter called Penny Lane. This 2-4 player game is a charming mix of worker placement and tableau-building. 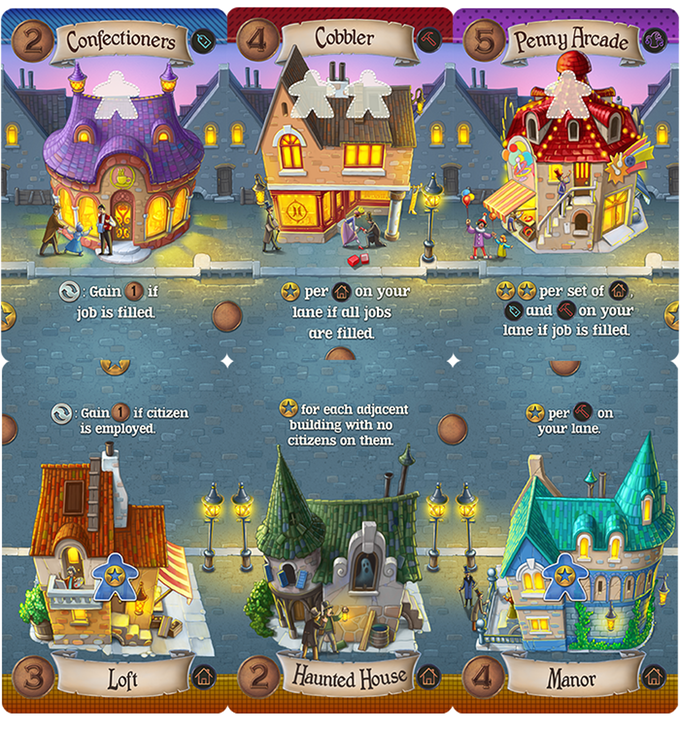 Players will purchase buildings to add to their avenue and then carry out the effect of that card. During your upkeep phase you’ll gain 1 penny, but if your buildings create “penny links”, you’ll gain extra pennies. This also works for “victory point links” which net your VPs at the end of the game. Once someone gets 10 victory points on their lane, the final round is triggered. The player with the most victory points at the end wins!

I love building games and Penny Lane looks like a fun, quaintly themed game. You can learn more about Penny Lane on Kickstarter here!

Things are about to get weird on planet Earth. In Darwin’s Choice players take on the role of evolution itself. Each player is trying to create the most optimally evolved creatures for the available vegetation zones. By mixing up animal parts, you’ll make creatures that can thrive in different zones and earn you Darwin points. The player with the most Darwin points wins.

This game has a little Island of Dr. Moreau feel here and I’m diggin it. I love the idea of coming up with these wacky animal combos. I’ll see your sharkadile and up you my flying Rhinohippawhale! Evolve your own opinion on Darwin’s Choice by checking out the Kickstarter here!

So Prehistory was already funded and ready to go, but some fans didn’t get an opportunity to back and people like me somehow missed the original campaign altogether (I’m not sure how that happened). Thus,  A-games is doing a quick late-back campaign that also has a few improvements like new rules, a solo mode, and updated tokens to make the game more color blind friendly. 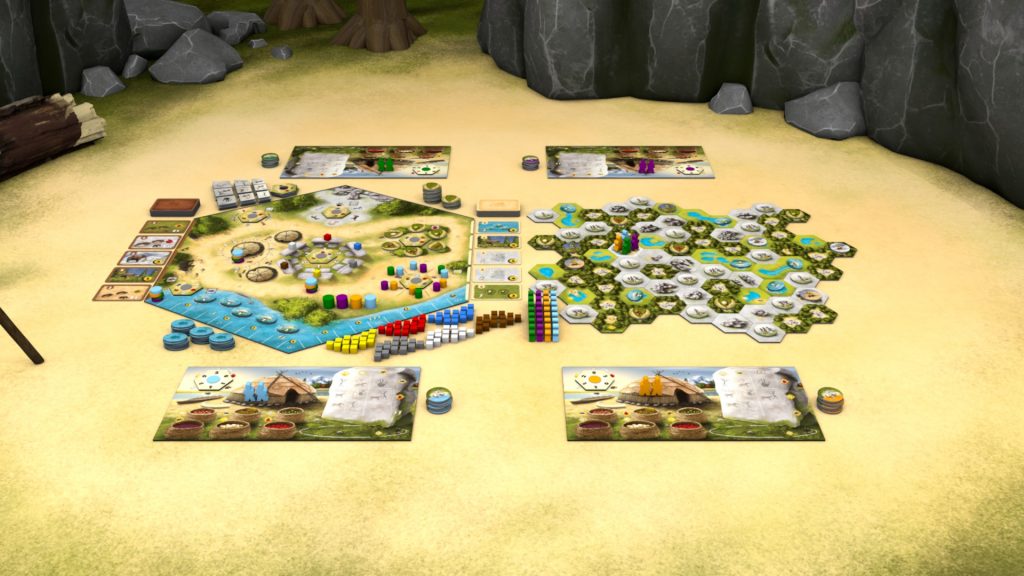 In Prehistory, players are part of a prehistoric tribe that is trying to find a new place for their village. You’ll explore the local area, hunt, gather, fish, perform ceremonies, and more to make your tribe prosperous. The player who progresses the most wins the game. This one is only around for a limited time, so check out  Prehistory on Kickstarter here!

Which games will you be backing this week? Let me know in the comments below!