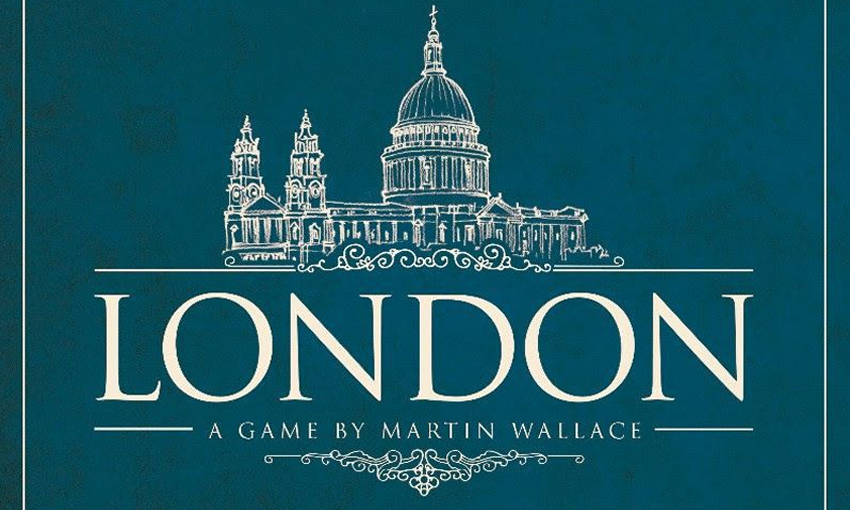 The second edition of London is an absolutely gorgeous game full of tight economic choices.  The  building up of your city, accounting for gains and losses, is a fascinating mechanical challenge, but an emphasis on punishing loss along with incremental gains might make this clearly clever game come off feeling a bit too negative for some people's taste.

London has burned.  The great fires that ravaged the city have guttered out, and survivors now turn to the task of rebuilding this once-magnificent city.  That is where you and your fellow players come in – wealthy investors who see in the ashes an opportunity to not only restore London to its former greatness but for tremendous profit besides. 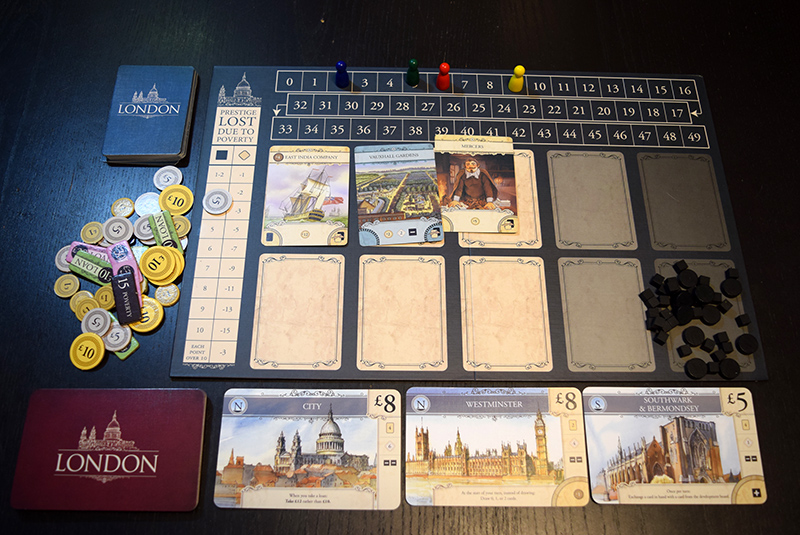 Andrew:  So let’s get this out of the way right up front – we’ve never played the first edition of London.  So for those of you who are fans of the original and are looking for a summary of what might have changed, that’s beyond the scope of our review.  Sorry!  Instead, we’ll be coming at this reimplementation with the fresh eyes.

In London, each player will manage their own tableau of city cards.  Each city card added serves some function within the city, either generating prestige (victory points), generating (or costing) money, or preparing other cards to activate.

Andrew:  How could I?  Alternate tiles for this game could have been Poverty Manager 5000, City of Poverty, and Poverty II: The Impoverisheder.  But I’ll get to that in a second, after we take a look at the turn sequence. 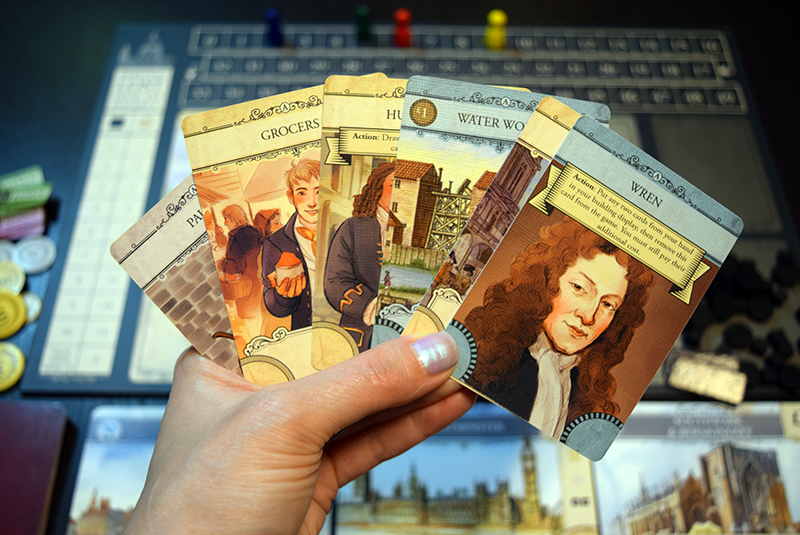 On each turn, the active player will draw a card into their hand, and then must choose one of the following actions:

At the heart of London is the concept of engine building.  Almost every card added to your city has the potential to generate money, points, and yes, poverty, which we’ll look at shortly.  When you choose the Run your City action, you will activate each of the topmost city cards in your stacks, paying whatever operational costs they may have, and reaping all the benefits they produce. 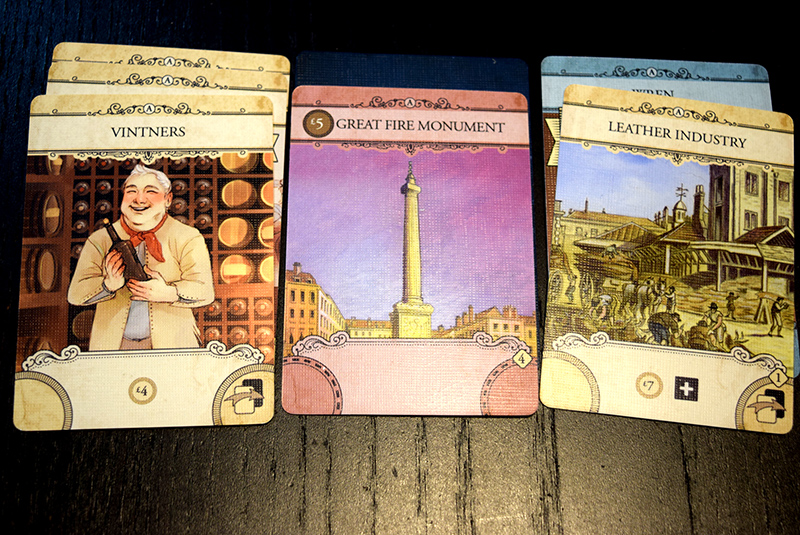 Only face-up cards can be activated; many valuable cards flip face-down after activating, and therefor must be turned back up by other cards in order to be used again (though no card can ever be activated more than once per turn).  Borough cards are also activated when you run your city, adding (or subtracting) resources as noted.

Jess:  So this is the part of London that I love.  As you build up your city, you’re looking to create synergies between cards, and if you can manage to do so skillfully, running your city becomes this cascade of awesomeness, with each activated building feeding into the next, producing a surplus of coins and points along the way!

Jess:  But those dang black cubes. 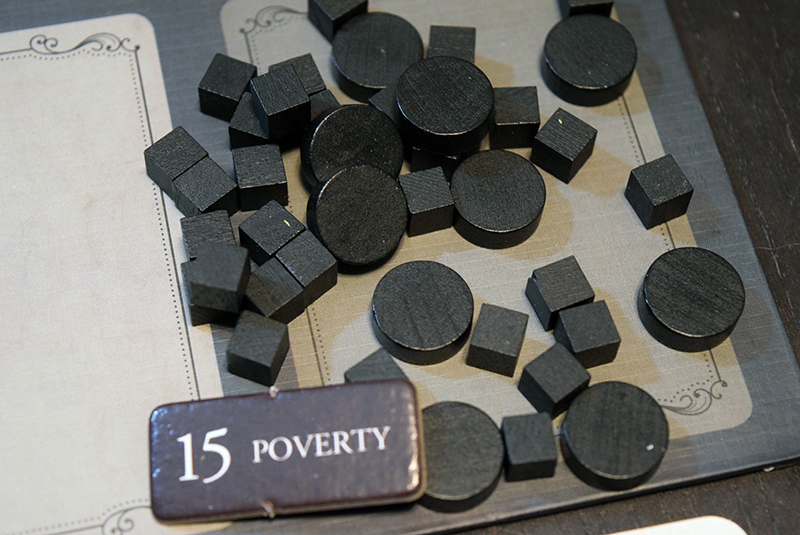 Ok, now’s the time we talk about poverty.  In London, an omnipresent consequence of gameplay is the generation of poverty – a constant reminder of the inefficiencies and shortcomings of the city’s economy.  Whenever you run your city, your city cards may generate poverty.  Additionally, you gain poverty for each stack of cards in your city, for each card in your hand, and for any loans you may be currently holding.

Jess:  Poverty suuuuucks, which probably isn’t a controversial statement, but it really affected my experience with London.  You work so hard to build up your city’s engine, but every time you run it, you get this cascade of poverty tokens that really make it feel like you’re ice skating uphill.  And there are lots of ways of getting rid of poverty, sure, but those buildings only do so when you run your city which, haha, generates poverty!  I hate that.

Andrew:  I completely get you there.  London can feel absolutely punishing – there’s something about the way poverty cubes amass, sometimes uncontrollably, that makes it seem as though it would almost be better not to engage your engine at all, rather than see that mound of future negative points pile up.

On the other hand, smart management of poverty is a key part of the strategy of London because, it follows the same rules as outrunning a hungry dragon – you don’t actually need to outrun the dragon, you just need to outrun your friends.

At the end of the game, the player with the least poverty discards all their poverty, and each other player reduces their poverty by that amount.  Only then does poverty translate into lost points, so if you can manage to be about as efficient at managing it as your fellow players, then its impact is mitigated. 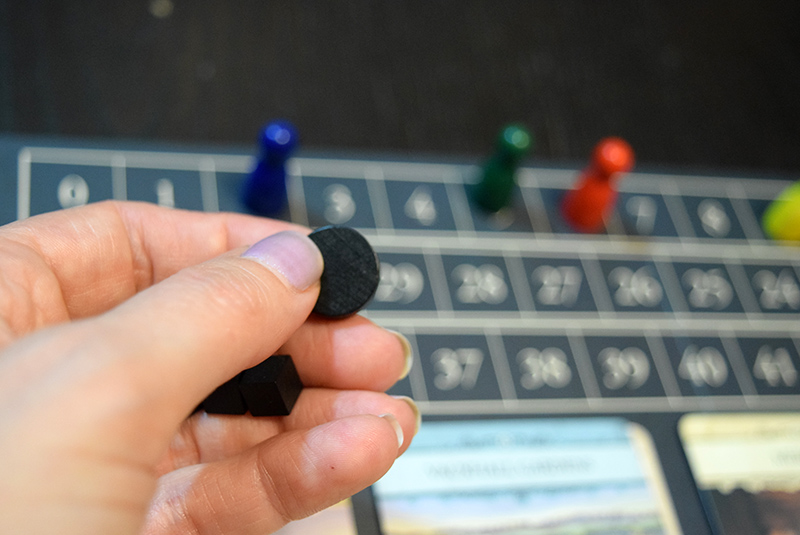 Jess:  That’s a neat aspect of the poverty mechanic, I’ll concede.  It’s not so much that you never want to accrue it, rather you just need to be careful about not having the most of it.

Andrew:  But that doesn’t mean it isn’t a constant concern.  The rate at which you can earn those tokens can feel overwhelming, and managing to rid yourself of them can be as difficult as dealing with the city’s infestation of paupers!…which is a pretty insensitive statement, I’ll give you that. 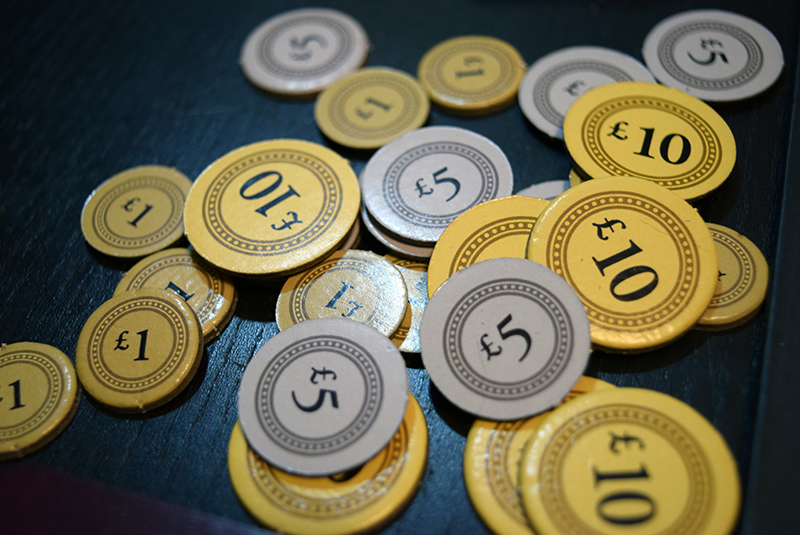 What London does, it does brilliantly.  Each choice you make, whether you’re adding to your city, grabbing some cards, purchasing new land, or firing up your city’s engine, all come with the potential for great cost as well as benefit.  Finding the balance between profit and loss, and between generating and purging poverty, is the essence of the game’s experience.

It’s also a game that benefits from a few plays, because the first time through you’re either going to burn yourself into the ground by mismanaging those damn black cubes, or be so overly-cautious you’ll end up with a big pile of nothing.  The strategies that win are driven by a good management of risk and reward, and by keeping an eye on your opponents’ position as well.

Jess:  All that’s absolutely true.  But London wasn’t the game for me.  I love engine building because I love additive gameplay, where each choice makes future choices more powerful or interesting.  In London, you’re constantly bogged down in damage control, taking the fun out of my favorite part of the genre, and making it all feel a little too much like work.

Andrew:  And I agree with your assessment, but not exactly with your conclusion.  I liked London for all the reasons we’ve mentioned – the core concept is fantastic, the mechanics are smooth, and the presentation is simply gorgeous – but I also had all the problems with it you did.  It can feel like work, it can feel punishing.  I just liked it despite those things.  And I suspect some people will love London precisely for those attributes. 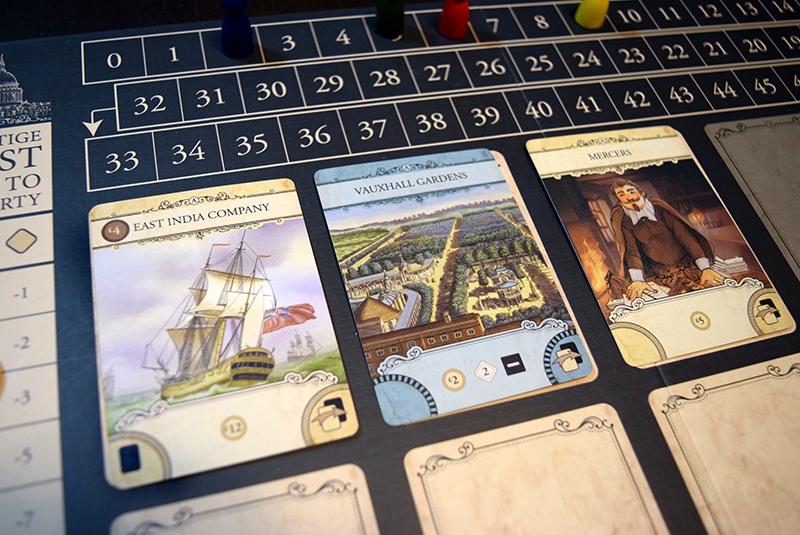 As we said, we have no idea how London (Second Edition) stacks up against the original.  That said, we both really appreciated some aspects of its design and presentation.  And while it’s probably not the game for folks looking for a more carefree city-building experience, London will shine for those interested in its unique, gorgeously-presented challenge.