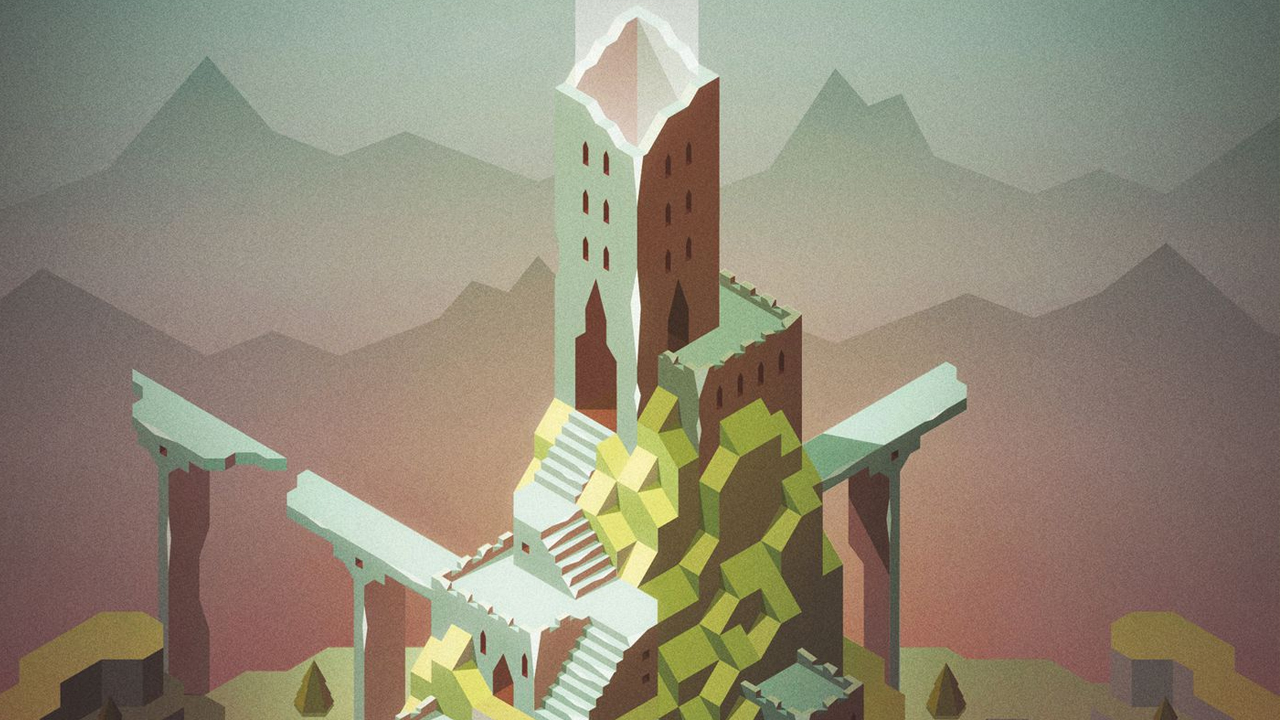 Unearth is a game of rolling and placing dice as your tribe works to excavate ancient ruins.  While the gameplay is actually quite abstract and there's a lot of randomness to it, the visuals make the Unearth stunning on the table, and its light weight works well with its core mechanics - just don't go in looking for real strategic gameplay.

Unearth is, in all honesty, an abstract game.  There’s a veneer of theme, that of tribes of adorable little creatures scouring the world for lost places and the ruins of a once-great civilization.  But in all practicality, that theme doesn’t really matter to the game at all, aside from the art on some of the cards.  But that’s ok!  The theme simply isn’t necessary to inform Unearth’s gameplay, which is fairly easy to grasp. 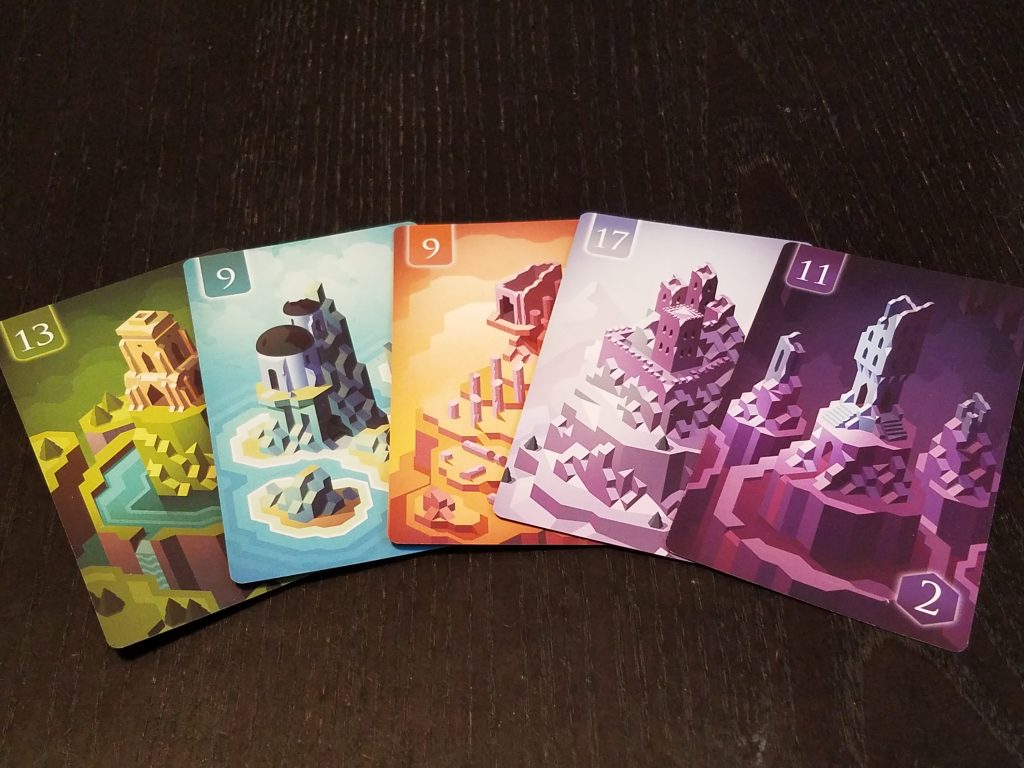 At the center of the table, a row of ruins wait to be excavated and claimed.  Each player has a set of ‘workers’, here represented by some polyhedrals which will inevitably be familiar to most anyone who has ever tried to dungeon a dragon or two.  But these dice aren’t for battle – instead, the dice in Unearth will be rolled and assigned to the ruins as players vie for control over these locations.

On each turn, you must roll one of your dice and send that worker off to one of the ruins.  For the most part, your aim is to gain control of ruins for your tribe, as these ruins will score the majority of your end-game points. 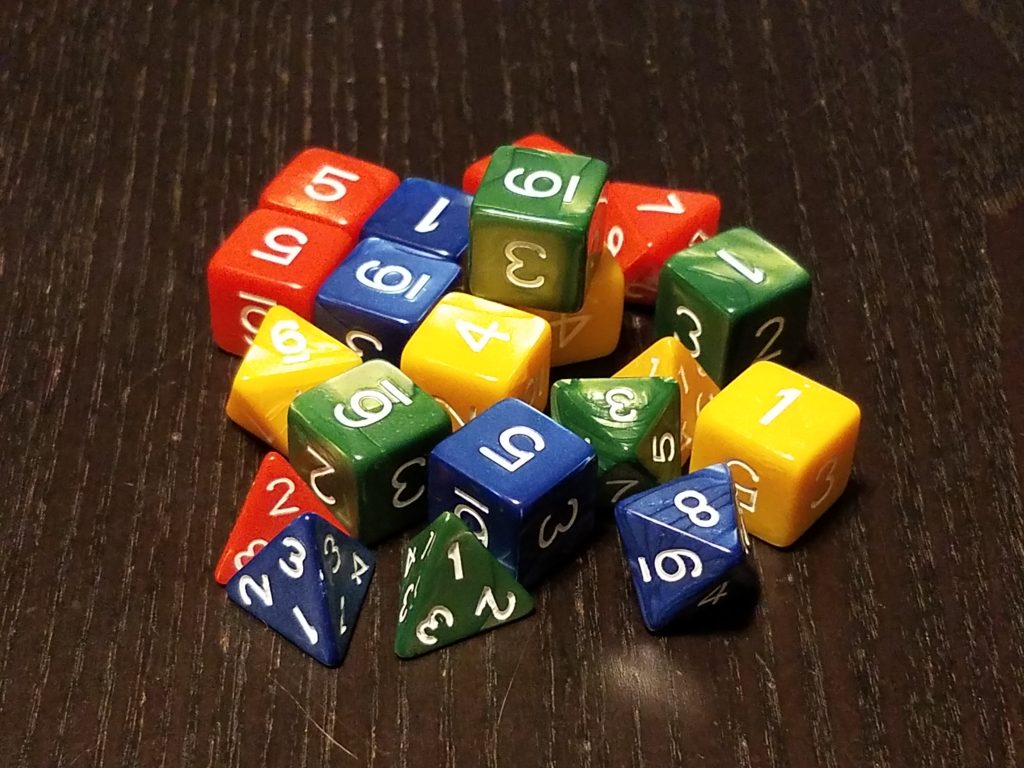 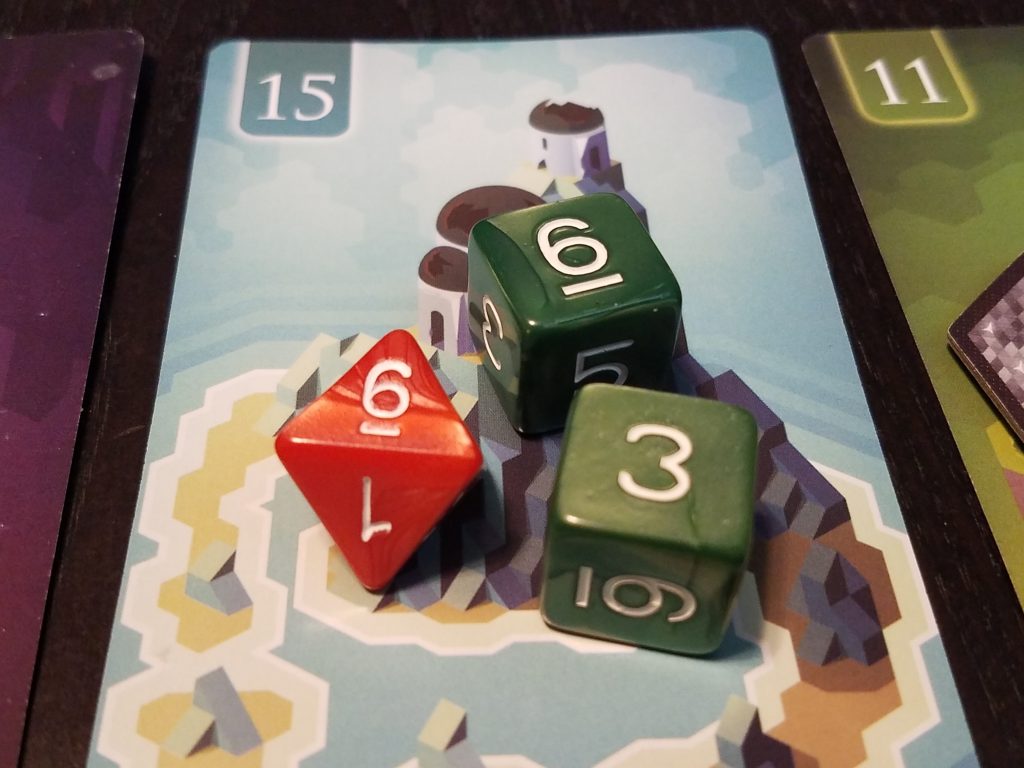 However, even if the dice aren’t in your favor, there are still rewards to be gained from sending your workers to the ruins.  When a ruin is evaluated, each player who does not win the ruin gets to draw a Delve card for each die they sent there.  These cards will let you manipulate the dice on the ruins, both yours and your opponents’, and thus add strategy to Unearth’s otherwise randomness-driven gameplay. 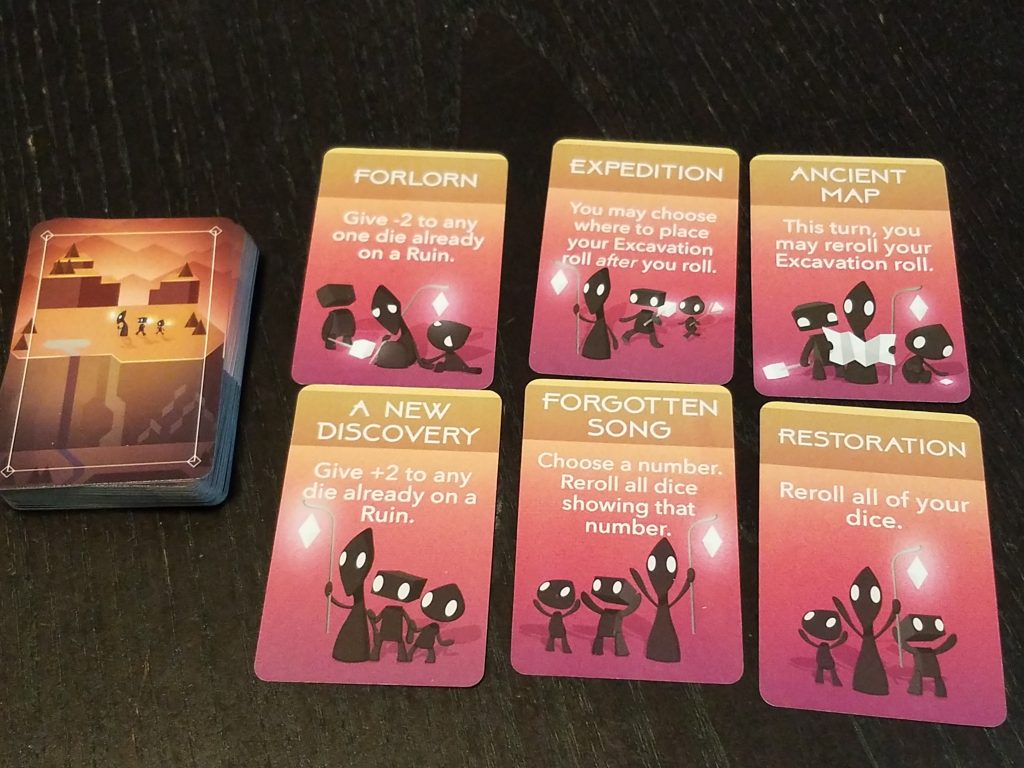 Andrew:   Delve cards are really useful under the right circumstances, and they can help you take control of a situation which is chock full of chaos.

Jess:  Yeah, without those cards, Unearth would be just a rollfest for the most part.

But there’s another potential gain to be had even when your workers come up short.  When ruins come out, each one will have ‘stones’ placed on them.  These stones are gained by players who roll a 1, 2, or 3 when exploring that card. 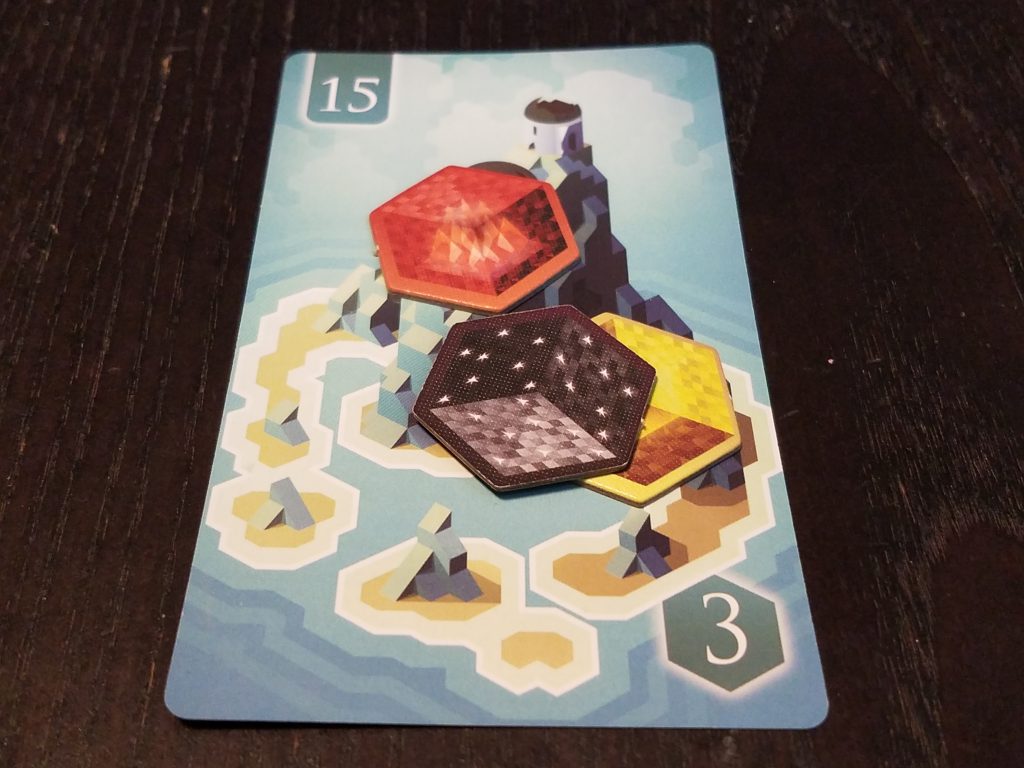 Stones are arranged in rings in a player’s area, and by completing sets of 6, players can add Wonders to their tableau.  There are generic wonders, which contribute points, and there are special named wonders, which give unique powers to the player who erects them, though these require more specific sets of stones to be used in their construction.

Jess:  I love getting a good wonder early in the game!  Sometimes the active abilities are really powerful, and if not, then the scoring rules that they can contribute lets you build a strategy.

Andrew:   Absolutely!  On the other hand, well, there’s a problem with Unearth that the wonders actually really highlight.

The turn structure of Unearth works like this – you choose which of your workers you will send, you choose which ruin to send them to, you play any delve cards you think you might need, and then you roll your die and see what you’ve gotten.  And its that sequence which can lead to frustration.

Andrew:   See, you have to commit all your resources, make all your decisions, before you get a chance to see what you’re working with.  Everything in Unearth revolves around how the dice fall, and almost every delver card mitigates the randomness somewhat, but at the end of the day, you’re still just rolling a die and hoping it doesn’t randomly give you nothing useful.

Josh:  Yeah, that’s a fair criticism.  For example, more than once I rolled a 4 when I sent a worker to a ruin, and that just sucks!  It’s often not quite high enough to claim a ruin, but it’s too high to get a stone!  So I often found myself contributing to the excavation of a ruin without any reward, aside from at least getting to draw a delver card once it got scored. 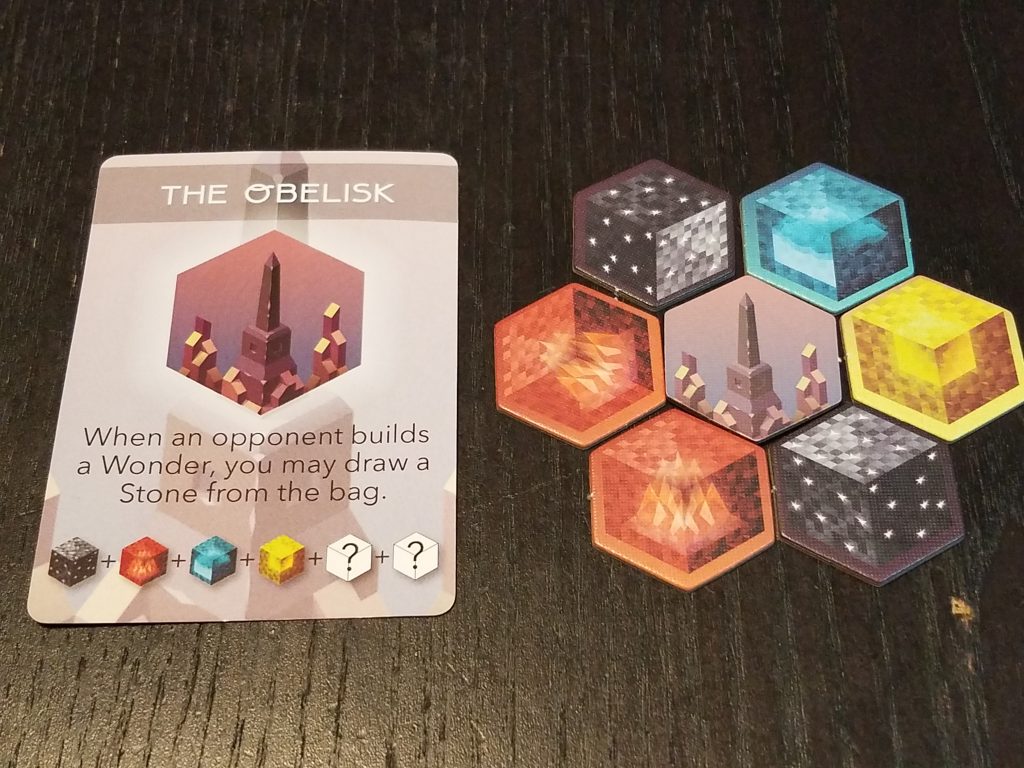 Jess:  I think my only real gripe with Unearth was that I wanted to build a lot more wonders!  That’s where the fun was for me, and the fact is that I still don’t think I’ve ever seen someone manage to build more than two over the course of a game.  The whole collecting stones and building wonders thing feels like it tacked on, but it was a good idea, and I wish they’d done more with it.

Josh:  Yeah!  Getting a stone is pretty dang random – you have to aim at a ruin with stones on it and hope you roll low!  And if a ruin is excavated before the stones on it are claimed, those stones are just thrown away!  It felt like such a waste!

Andrew:   100% agreed.  That said, there are a lot of unique wonders in Unearth, so you’ll get some variety there.  On the whole, I think my criticism can be summarized simply by saying that though Unearth is fun, it can be difficult to actually form a strategy around all the randomness, and that can occasionally feel unsatisfying.

A game of Unearth lasts until all the ruins have been claimed.  Players will score points based on the sets of ruins they’ve excavated, plus any bonuses from Wonders and the game-ending End of Age card, which is revealed just before the end of the game.  The delver with the highest point total is the victor. 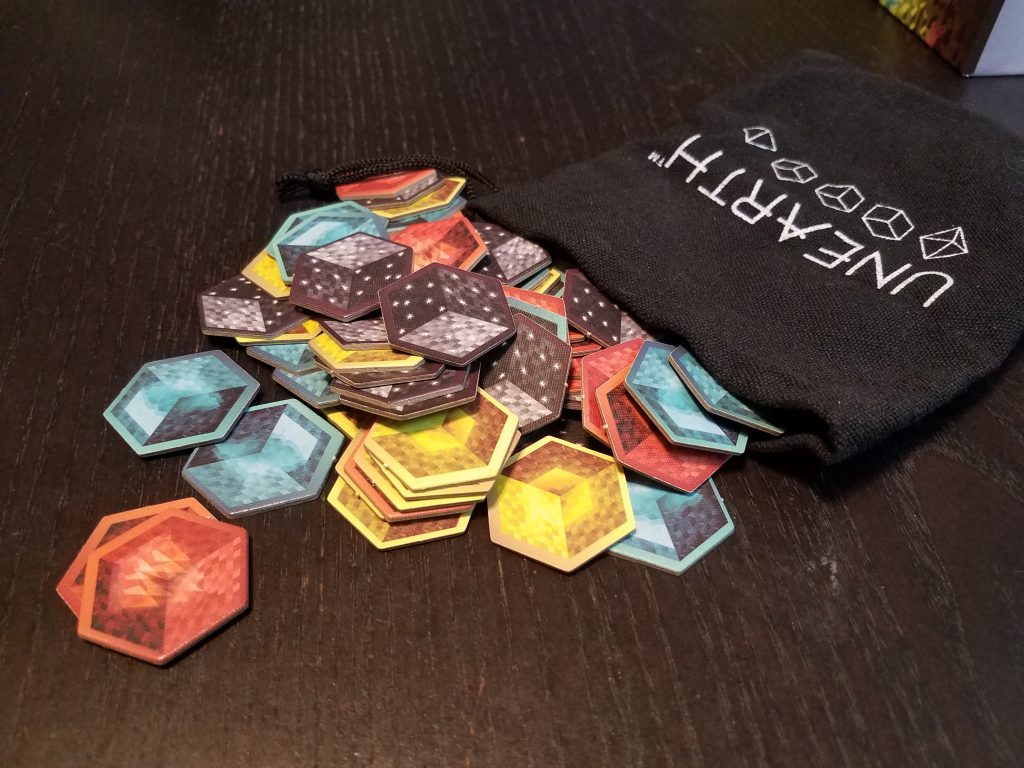 Jess:  So, criticisms accounted for, what did you think of Unearth?

Andrew:   Honestly, I wasn’t too keen on it the first couple of plays.  However, I found that player count had a real impact on the experience for me – two was too low, and four was too chaotic.  The sweet spot was 3, and every time we played it at that count I had a better time with it.

Josh:  I didn’t mind it, but I found it to be a little too random for my taste.  And while it’s a dice game and you have to accept randomness going in, I found that, as you said, the whole ‘make all your choices and hope’ gameplay wasn’t really for me.  Jess?

Jess:  Well, I think I liked it more than you did, Josh.  The randomness didn’t bother me too much, though I don’t disagree with anything you said.  I think if you meet Unearth where it is, as a beautiful, light dice roller, there’s a good time to be had here.  I just wish it had done more with 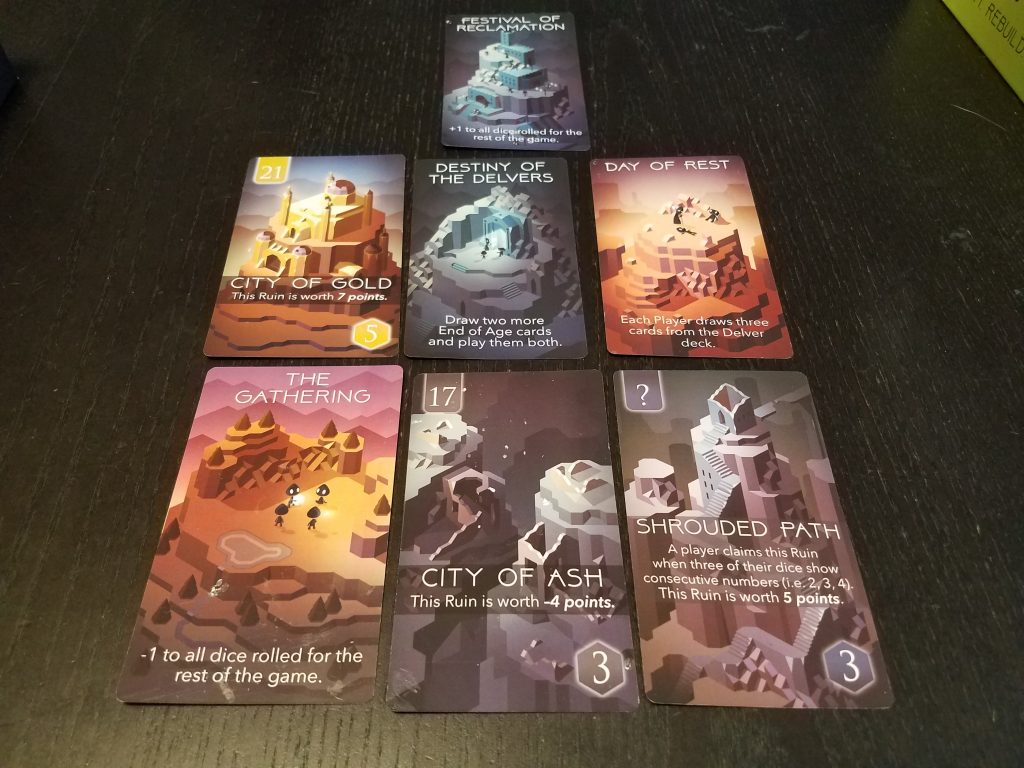 Andrew:   Beautiful is right, actually.  The theme may not contribute anything to the gameplay, but it certainly did give them an excuse to make a damn pretty game.  Every time it hits the table, I can’t help but reflect on what a gorgeous app could be made from the art assets on display.  Unearth draws the eye every time, and I think that’s a huge part of the appeal.

On the whole, we do recommend Unearth, with the caveat that you should go in ready for the randomness to define the gameplay experience.  It’s a visually stunning game that fits a certain niche, and plays best at higher player counts.  While we sometimes wished we could simply do more, Unearth does an excellent job of doing what it does, and we ultimately had fun with it.