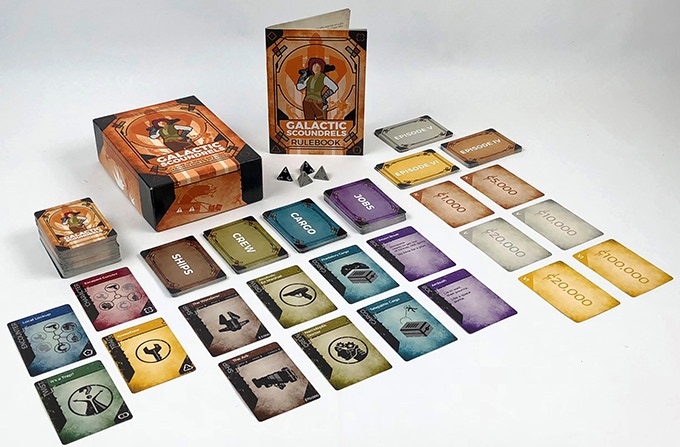 Galactic Scoundrels is the inaugural outing for designer Joseph J. Williams and publisher Little Rock Games and is absolutely steeped in potential...which it falls a bit short of realizing.

In Galactic Scoundrels, players are fast-talkin’, blaster-slingin’, cargo-wranglin’ space outlaws, looking to score the biggest pile of credits possible!  Up on Kickstarter right now and doing great, Galactic Scoundrels is a game of storytelling, bribery, and backhanded sabotage as 3-5 titular scoundrels square off to see who can get away with the most cash before the end of the game!

Jess:  And when you put it like that, it sounds really fun!  Unfortunately…

Andrew:  Whoa, whoa, hold on with the negativity!  We’re barely past the intro paragraph!

Jess:  I know, and I hate that I’m going to be the dissenting opinion here, but man, I just feel so let down!

Andrew:  Well hang onto all that for a sec, let’s at least do the Kickstarter blurb thing before we get into it.

Gameosity received a prototype of this game.  All images here are either of that prototype or from the Kickstarter Page, and may not reflect the final product.

In Galactic Scoundrels, each player starts with a negligible pile of credits, a ‘functional’ spaceship, and a dream (note: Dream not included in our Kickstarter prototype).  The game is played out over a series of rounds, or Jobs.  Each Job is run by a single player, who’s trying to make it through and get paid for their work.  Meanwhile, the rest of the players contribute cards to the job, throwing unexpected complications into the active player’s efforts.

The active player, in turn, will burn through cards in their hand, cargo in their hold, crew members, passengers and possibly even their ship itself as they try to make it out the other end of the job intact – and profitable.

Andrew:  So, right off the bat, I will say that Galactic Scoundrels features a little bit of ‘early game hell’ (that’s for my fellow TV Trope readers).  The first couple of jobs likely won’t end in success, because players start out with some pretty meager resources.  And that, to be honest, can be pretty frustrating.  But once you manage a job or two and you can afford a better ship and some crew support, things get a bit more interesting.

If a player can manage to sidestep, bluff, bribe, and overcome all the complications their fellow scoundrels throw at them, they get to claim the reward for the job – credits they can use to upgrade their ship, hire new crew, bribe their way past future trouble and, of course, sit on and horde as victory points.  Otherwise, it’s time to slink back to spaceport, scrounge together some more resources, maybe replace that ship you blew up, and try again…and definitely try to screw the players who screwed you.

Andrew:  Every part of Galactic Scoundrels is intended to be drenched in theme.  I say ‘intended’ because the theme is almost entirely yours to apply – as the rulebook frequently reminded us, Galactic Scoundrels is first and foremost a storytelling game, and it’s on you and your crew (of players, I mean, not, like, scoundrels) to be active and enthusiastic as you narrate the details of the job, like how the Encounter cards complicate the active player’s life or how they manage to circumvent a troublesome character using one of their trait cards.  Non-storytellers need absolutely not apply.

Jess:  And that’s far and away my favorite part of Galactic Scoundrels, and from the way the game is presented, I’m sure it’s the designer’s favorite part too.  The whole ‘evolving storytelling’ thing is brilliant – I love how each new card gets added to the narrative, whether for or against the active player, and the table-talk that forms around it as these quick vignettes unfold can be super fun!

The ‘but’ here is, unfortunately, the structure of almost everything that isn’t the wonderful emergent storytelling thing.  For example, in Galactic Scoundrels, there are several key moments when players roll dice – to determine the value of a given job, and to determine how many attempts at sabotage the active player must endure before considering a job a success.

That first bit of randomness is fine – the value of a job may be up to the dice (and the dice only determine how many payoff cards get drawn, each of which has a different value, so there’s even more randomness), but at least players will know the value of a job before they start trying to go after it. 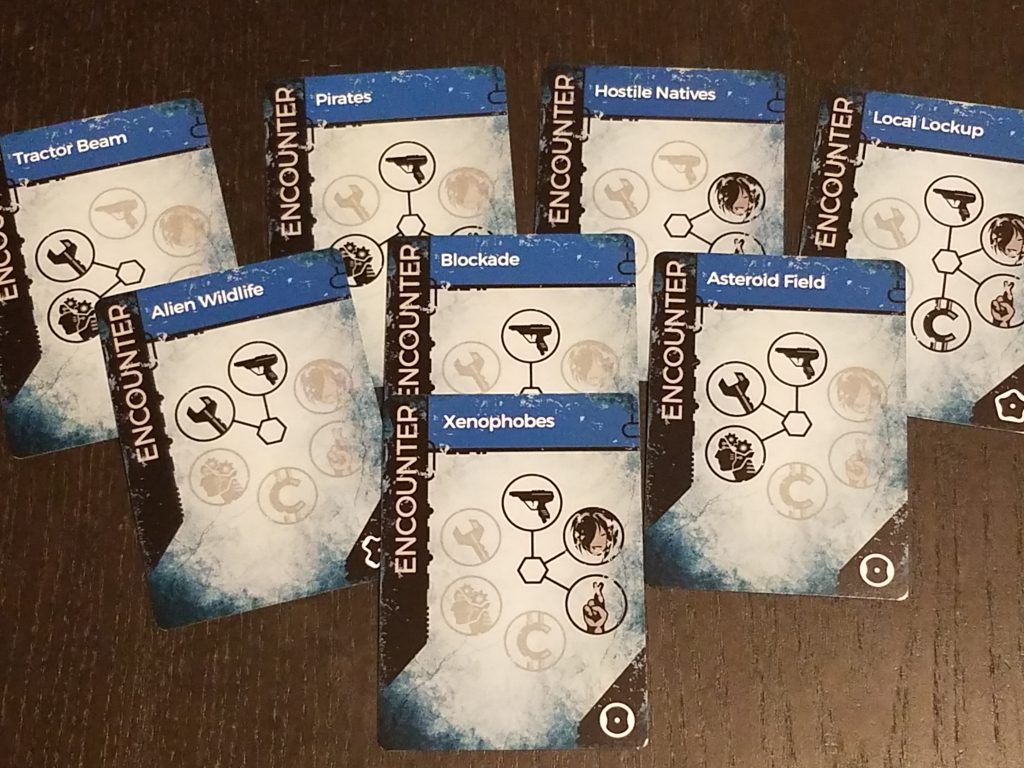 It’s that second bit of randomness that really starts to highlight the parts of Galactic Scoundrels that undermined what should have been a phenomenal experience.  Though it might be quite thematic, one does not learn how many complications one will face on a job until after one agrees to undertake it.  And that means that someone with a great hand of cards might randomly be dealing with as few as 3 complications, while someone with a mediocre hand stands the same statistical chance of finding themselves facing as many as 8!

Andrew:  Granted, the difficulty does ramp over the course of Galactic Scoundrels – it’s 1d4+2 complications in Episode IV, 1d4+3 in Episode V, and 1d4+4 in Episode VI.  But the problem stands – the dice will make even the very first job maximum difficulty 25% of the time, and that, to put it simply, sucks…also, the whole Episodes thing is just there for flavor, it’s the game’s timer mechanism, so don’t let that confuse you.

Jess:  Heck yeah, it sucks.  I mean, your hand size is 5, and it’s actually very tedious to raise it above that.  Yet, it’s frequent to have jobs with 4, 5, or 6 complications (no matter what Episode you’re in), meaning that unless you have the perfect hand of cards to deal with the crap your opponents throw at you, you’re basically guaranteed to fail more often than not!

And at it’s heart, this is where Galactic Scoundrels fundamentally misses the mark.  There is no luck mitigation mechanism in this game, and this game features a lot of luck.  The cards you hold are both the cards you use to undermine other players and the cards you need to overcome challenges when you’re on the job.

But there’s no efficient way of cycling your hand, no way of controlling the kinds of cards you draw, and no way of really predicting what sort of hand you’re going to be holding at any point.  Whether you’re on the job or not, the rules of Galactic Scoundrels mill through the cards in your hand, forcing you to play, challenge, and discard almost constantly, making any sort of planning almost impossible.

By design, it feels like the intent of Galactic Scoundrels is that your turns should work on a tick-tock cycle: when another player is on the job, you burn your aggro cards to screw them over, thus making room in your hand to redraw.  Ideally, you then draw cards that will make you strong for the next job, which you will hopefully win (winning and losing jobs is handled through a proto-poker minigame we think is thematic as all heck).  Then you use your cards to overcome challenges on that job, which puts you in the position of needing to resupply and thus start the cycle over again (and making room for other players to do the same).

Andrew:  And that would be a fine cadence, if it worked every time, or even most of the time.  Instead, our experience with Galactic Scoundrels was that players tended to have middling hands all the time (since every draw was totally random), and so were never well positioned to either dominate a job or effectively build a hand towards that goal.  Add to that the dice and you’ve got a game where randomness leads to randomness, which is rarely a good thing.

Jess:  And the heartbreaking part of all of it all was that we didn’t get a chance to really do the dang storytelling that attracted us to Galactic Scoundrels in the first place!  When it worked, it was great, but often as not you’d start a job, lay down the base narrative, and then four encounters later run out of cards and just say ‘oh well, uh, I guess I don’t do anything after all’.  It felt so frustrating to have to retreat or fail, and the narrative just deflates at that point.

Galactic Scoundrels is fairly rules-light, which is absolutely appropriate if the aim is to make the storytelling the star, but the problem is that every time the rules do crop up, they make an absolute nuisance of themselves.  What we have here is a box full of potential, but whose execution leaves something to be desired.

Andrew:  This one really disappointed you, eh?

Jess:  Yeah, it really did.  Galactic Scoundrels should be amazing.  Instead, it’s just blah.

Andrew:  What I will say is that I do see myself playing Galactic Scoundrels again.  But there’s going to be some houserules in place to shore up what I see as mechanical faults, so that we can focus on the storytelling first and to take just a bit of the randomness out of it.  I think it still could be of great value and tremendous fun – just not so long as it struggles under the the weight of some of the design decisions that went into it.

The bottom line is that Galactic Scoundrels was a miss for us, and it absolutely kills us to say it.  The truth is that the cards in this box are absolutely the skeleton of what could be an awesome storytelling game, something that would definitely bring us to the table again and again.  But the game itself is as cumbersome in places as it is inspiring in its current incarnation.

So that all said, we do recommend heading over to the Galactic Scoundrels Kickstarter now, to make the judgment call for yourself.

(Gameosity received a prototype for this preview, with the right to request a finished copy.  We were not otherwise compensated.)