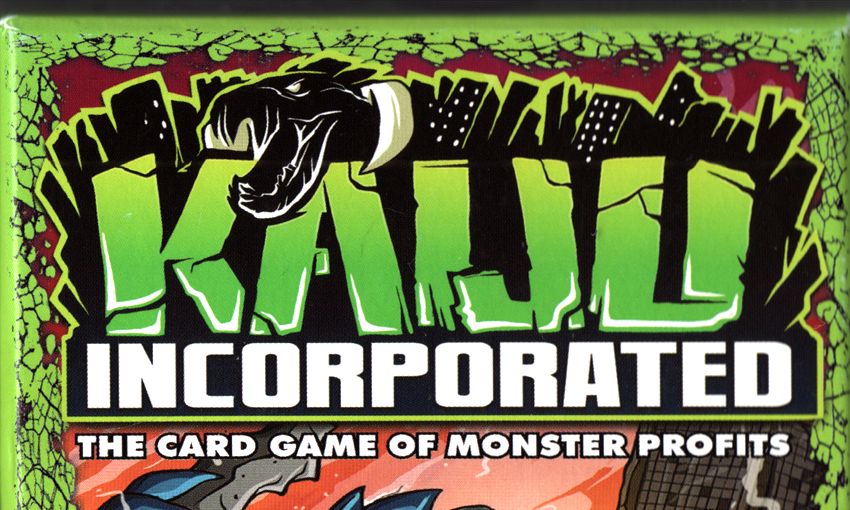 Kaiju Incorporated takes an interesting thematic twist on a fairly straightforward engine building concept, though perhaps not to its full potential.  However, unlike Machi Koro (with which it shares a bit of DNA), the absence of dice lends Kaiju Incorporated a slightly more strategic feel.

Corporations are all about finding the next ‘big thing’.  What’s going to be the new hit product next year?  What’s the idea that’s going to turn the biggest profit, promote the best innovations, control the largest chunk of the market?

Andrew:  …Ok, I walked into that one.  Here’s our review of Kaiju Incorporated. 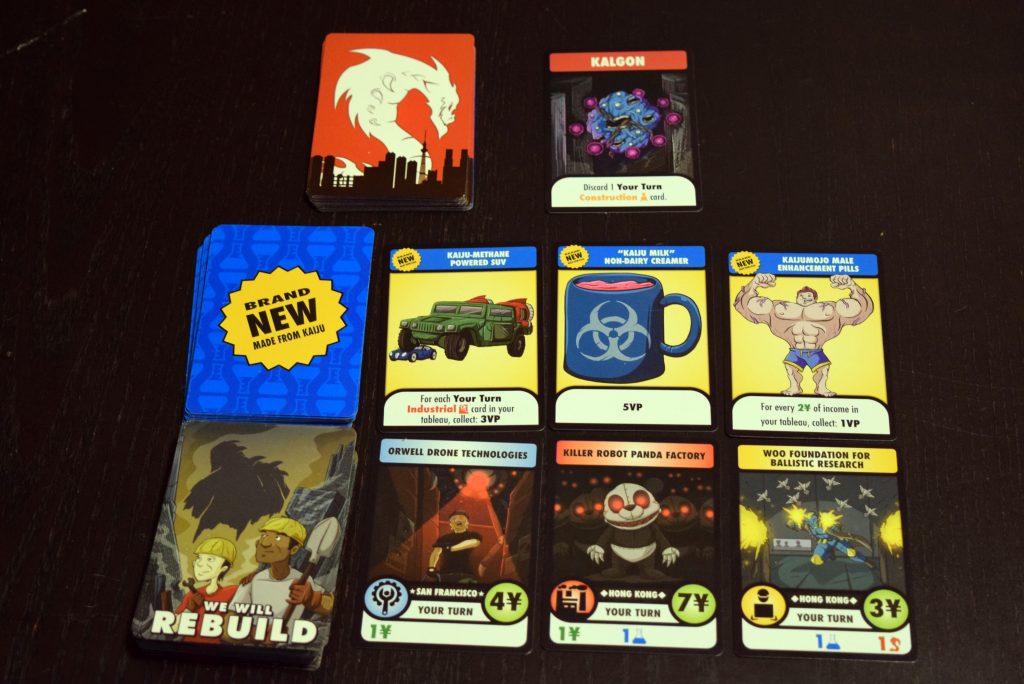 Kaiju Incorporated is a card drafting, set collection card game from Evil Hat Productions, the folks behind The Dresden Files Cooperative Card Game.  In Kaiju Incorporated, each player represents a company who is looking to make the biggest profit they can off of the recent wave of Kaiju attacks.

Andrew:  Ah, looking upon a massive humanitarian crisis and seeing only the profit margins.  Gotta love those corporations!

Rob:  For the uninitiated, Kaiju are giant monsters.  Think Godzilla, or Knifehead, or me when irritated.

Andrew:  I might even argue that Cthulhu qualifies as one.

Rob:  That’s a total stretch, and I’m offended you’d put Godzilla in the same category as that betentacled star-spawn.

Andrew:  There are literal tentacled aliens in the Godzilla franchise!

Rob:  YOUR FACE IS IN THE GODZILLA FRANCHISE.

On each turn of Kaiju Incorporated, players will make a key decision – do they add to their tableau, or do they run their resource engine.  When players choose to add cards to their tableau, they spend money they’ve accrued in order to add a given card to their engine.  Each card is from one of three suits, and either activates on their turn or on an opponents’ turn.

Which neatly brings us to the other potential action to be taken – Collecting Resources.  The active player discards one of the available cards, and that triggers all of the buildings in their tableau of that suit that activate on ‘Your Turn’.

Rob:  Of course, it also activates all the buildings in your opponents’ area of that suit, as long as they activate on ‘Rival’s Turn’, so you want to keep an eye on what you’re setting your opponents up to get.

The three tracks which are affected by the Collect Resources action are Money, Research, and Kaiju Attack.  Money is gathered and spent to add new buildings to your engine.  Research is valuable because every time you get enough of it, you get to snag one of the valuable Research cards on offer. 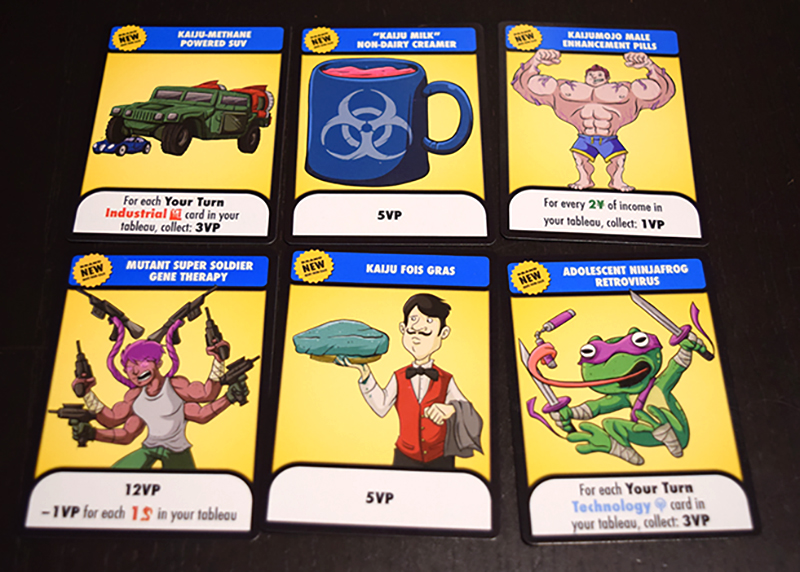 Andrew:  That last one though, Kaiju Attack, is where things get interesting.  Because whenever you gather enough of that, you suffer the effects of the currently-attacking Kaiju.

Rob:  And there’s where the real strategy comes in.  Since your decision to collect income potentially affects all players (depending on what buildings they have), it’s totally possible to intentionally trigger your opponents’ engines and send them into the Kaiju zone. 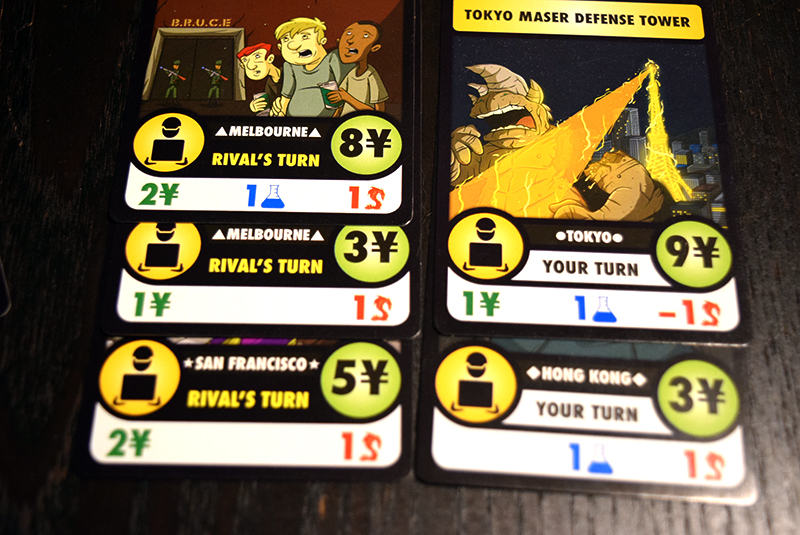 Mechanically, Kaiju Incorporated is a straightforward game.  Strategically, players must evaluate how thinly they want to spread out their tableau – diversity means a steady trickle of income on more turns, whereas specialization results in big payoffs.

Andrew:  Now as I recall, you had a bit of an issue with overspecialization in Machi Koro, which I think has a similar feel to Kaiju Incorporated.

Rob:  Hey, eventually it paid off big!  Eventually.  But yeah, Kaiju Incorporated definitely has echoes of Machi Koro, and I think it even improves on that core concept in some ways.  The draft lets you be more strategic in what you build and how you craft your engine, and there isn’t the total randomness of dice to deal with.  It’s got fewer options and that makes it a tighter game overall, at least compared to Machi.

Andrew:  For sure, and in that way I do think Kaiju Incorporated might actually unseat other games like it for folks who are looking for a more tailored, slightly more gamerly experience.  But on the other hand, I think that Kaiju Incorporated’s best quality, its theme, is absolutely squandered!

Rob:  Hey, they have Kaiju attacking us!  That’s a thing!…But yeah it’s mostly true – after the first few turns, it was hard to stop and appreciate all the clever card names and funny artwork because all that mattered was what resources they gave you.

Ultimately, there was nothing really ‘Kaiju’ about Kaiju Incorporated – this could have been a game about textiles or office supplies or any other economy.  But that aside, Kaiju Incorporated is otherwise smoothly functional and mechanically easy to engage.  Just look elsewhere if you’re hoping to smash some giant monsters.

Andrew:  Somewhere like, say, the ancient cyclopean city of Rlyeh, where ancient Cthulhu stirs from his-

Rob:  CTHULHU IS NOT A KAIJU!…although, a Godzilla vs. Cthulhu movie would be insane…pun absolutely intended. 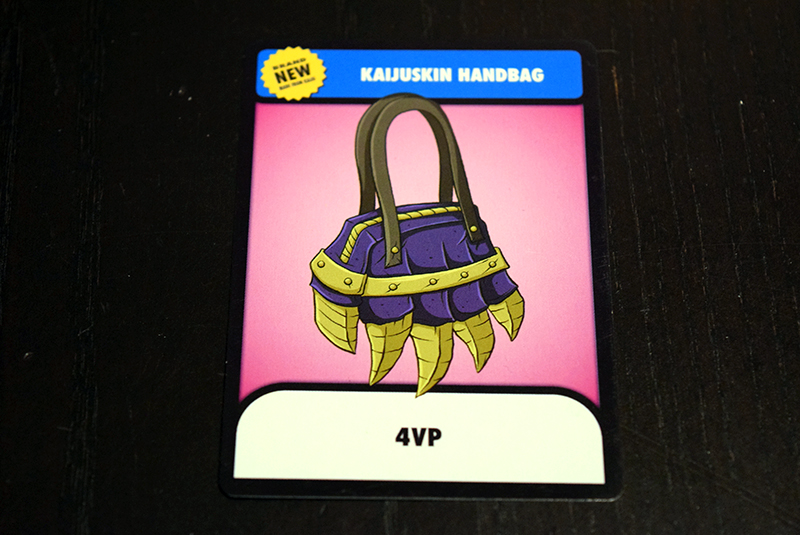