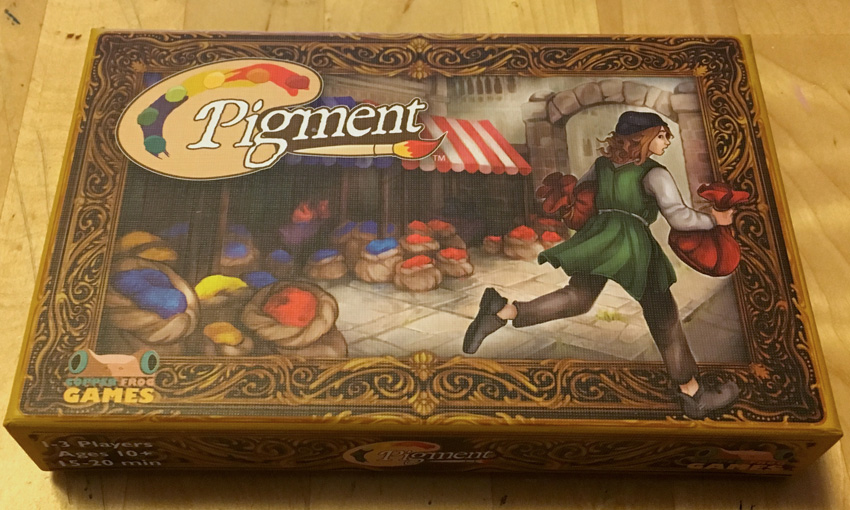 Depending on which half of Team Gameosity you ask, Pigment is either adequate for what it is but ultimately too basic, or a fantastic little 15-minute worker placement filler with some clever design choices.

Pigment is a fairly straightforward 1-3 player worker placement game – from designer Michael Epstein and publisher Copper Frog Games – that bases its theme around renaissance painting – specifically the act of painting, during what may or may not be the Renaissance period.

In practice, this takes the form of occupying “Bazaar Cards” (i.e. action spaces) using one of two workers, then utilizing the actions on those occupied cards to stockpile the pigments that are needed to complete some sweet-ass paintings.

Diana:  This was pretty easy to get into, but I feel like we played something very similar a while back that we had more fun with.

Rob:  I think you’re right. It was probably Starving Artist, which had a very similar approach to collecting paint resources and using them to complete paintings.

Diana:  Yeah, I definitely think I like Starving Artist more – it had more going on, and I feel like it uses its theme more effectively. 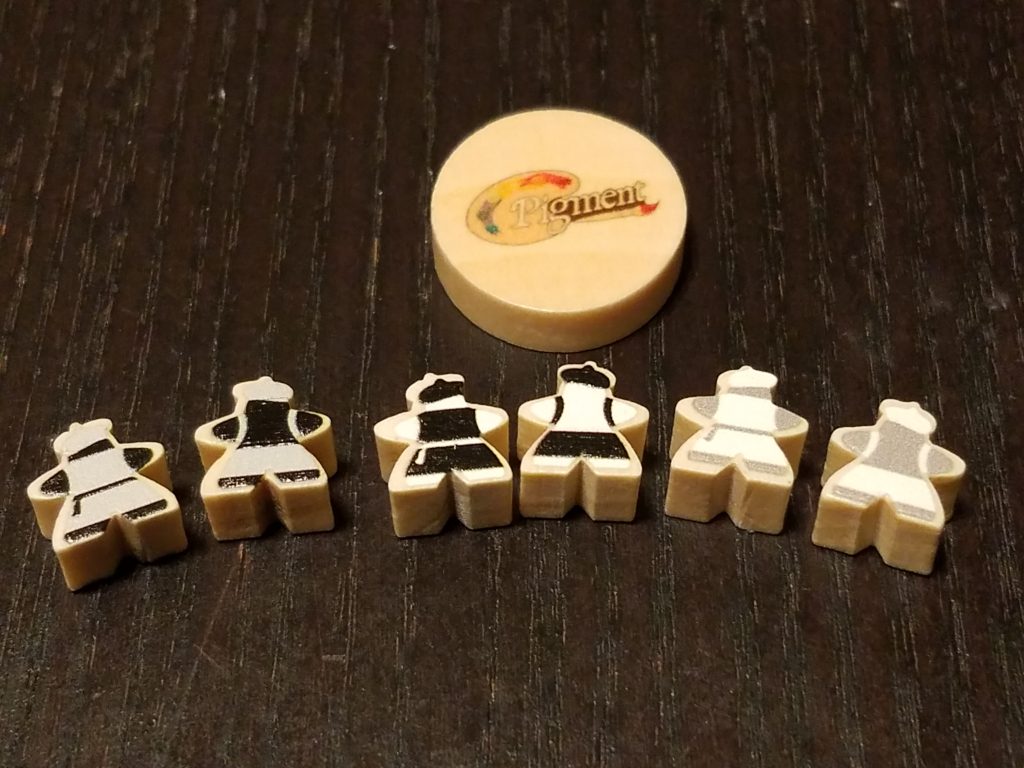 Andrew:  There are definitely some similarities between the games, from theme to mechanics, but I found them distinct and I don’t think either ‘replaces’ the other.  And I have to say, I’m honestly surprised you two didn’t like this one more.  I figured between the theme and the accessible mechanics, it was a no-brainer for you.

Diana:  I think that was the problem, actually.  It was maybe a little too simple.

Jess:  Well yeah, Pigment isn’t a complicated game.  But I think that’s a part of its charm, for sure.  A worker placement game that plays great for 2 and can be played in under 15 minutes?  Sign me up!

In Pigment, players will send their workers to market to gather painting supplies towards the task of completing a series of gorgeous paintings.  Often, players must choose between gaining a meager amount of paint for free, or trading in some paint for a larger payoff.  And it’s all about efficiency, because Pigment is actually a race – the first player to complete 6 paintings wins.

Rob:  To be clear, Pigment isn’t a bad game. It’s very accessible due to its simplicity – take turns placing workers, do the thing the occupied card says to do, try to stockpile the right pigment cubes to complete a painting, complete a set number of paintings before anyone else to win – but it’s more filler or entry-level than anything else. This is the kind of game that’s best used in-between heartier, more complex games. Or as a quick and easy introduction to board gaming for newer initiates. 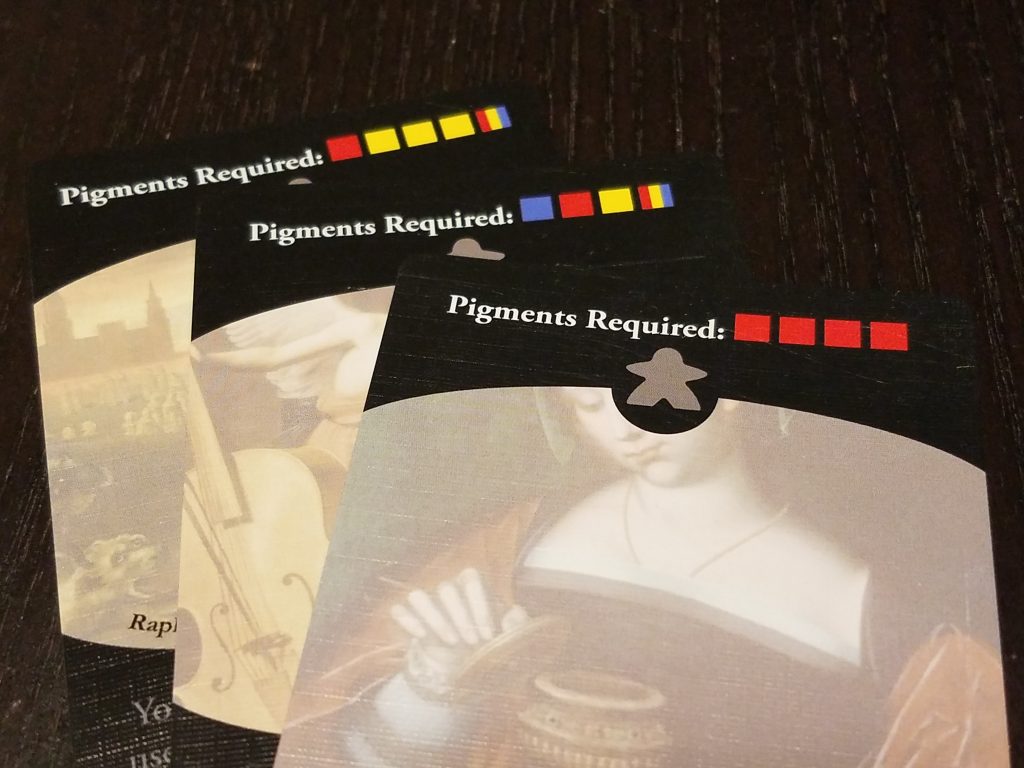 Jess:  I’d go a lot further than saying it ‘isn’t a bad game’.  I really liked Pigment for a bunch of reasons!

Jess:  Well, for one thing, each painting you complete gives you a unique power for the rest of the game – discounts on future paintings, personal worker placement spaces, that sort of thing.  So even though the strategic decisions are really simple, they change over the course of Pigment’s short game arc, giving each play just a little uniqueness.  And I liked that because it was a race you also had to keep an eye on what the other players were up to, because occasionally you just had to box them out of the paint they needed, but of course that ate up your precious actions. 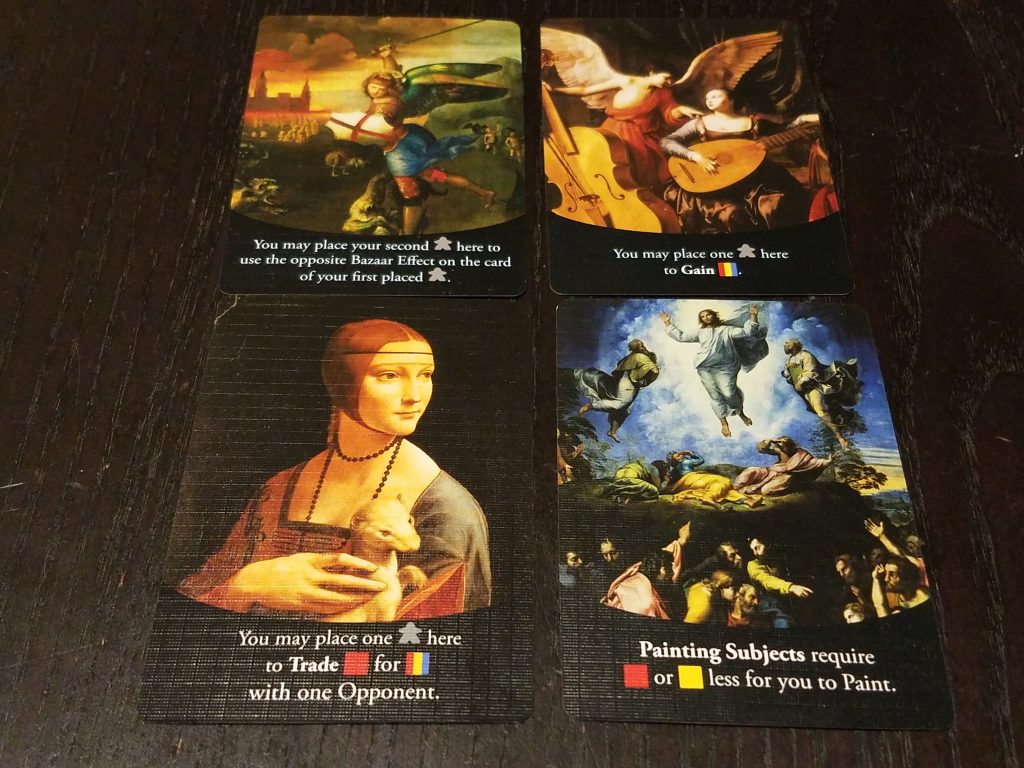 Andrew:  I also liked how the placement options randomly changed as the game went on, so as to add a teeny bit of complexity and variety to keep things interesting.  And I know we mentioned it before, but Pigment’s brevity is absolutely a boon to me.  This is a perfect backpack game – doesn’t take up too much space or time (or money), it’s easy to learn, it’s satisfying to play, and can even be played solo.  This is as good a little lunchtime game as you’re likely to find.

Diana:  Really?  For me, what’s here really feels like a foundation. And that was my problem – it feels like the skeleton of a game that should have a couple more moving parts.  And I like lighter games in general. 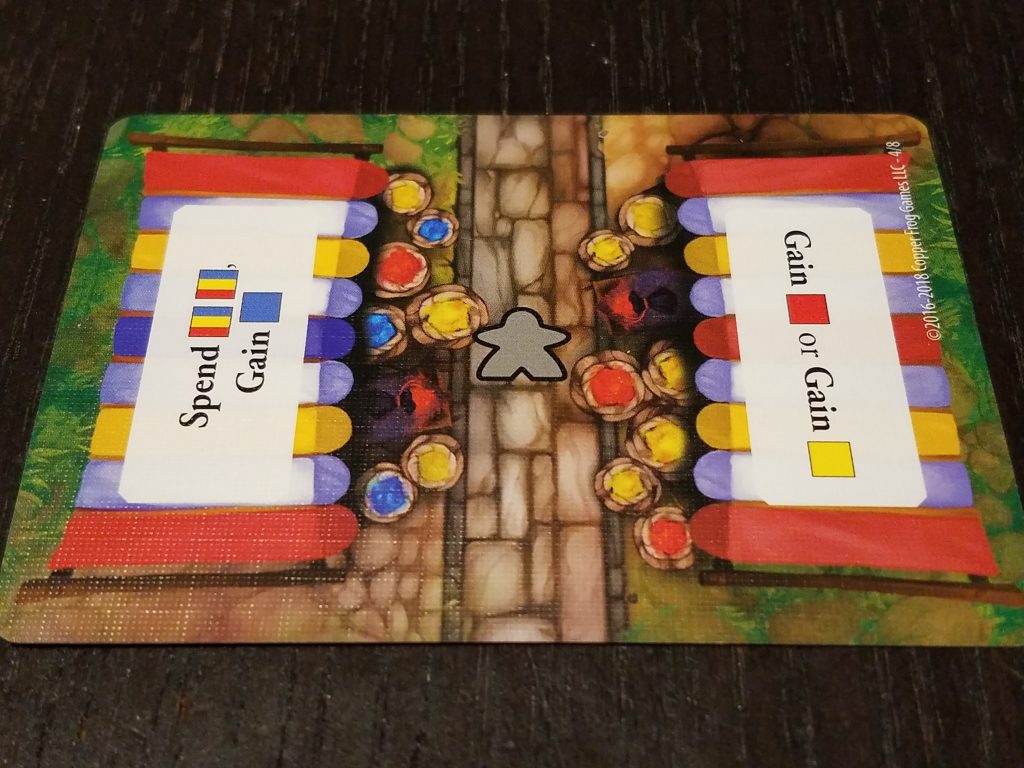 Rob: No, I don’t think either of us disliked it, not exactly, but while we were playing I couldn’t shake the feeling that something was missing.

Diana: I’m right there with you. I think Pigment is a perfectly decent starter or filler, but I also think we’d be a little more interested in it if we weren’t already familiar with other slightly more complex games.

Jess:  Agree to disagree, I guess!

Well, there you have it – a team divided by a simple little worker placement game.  While half of us really wanted Pigment to have more meat on its bones, the other half were perfectly satisfied with the snack it represented.  So do we recommend it?  Absolutely!  And not.  As with all art, its beauty is entirely in the eye of the beholder.

If you’d like to behold Pigment for yourself, it can be snagged directly from Copper Frog Games by clicking here!