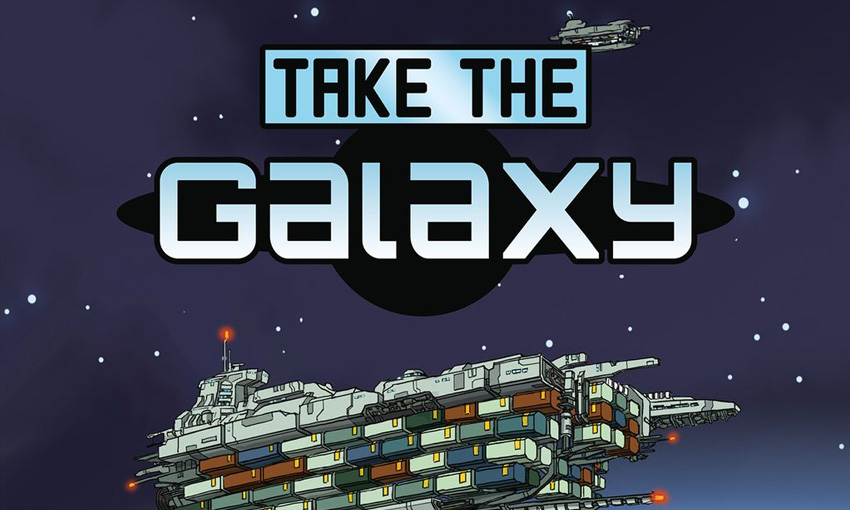 Offering up a unique twist on galactic exploration and expansion, Take The Galaxy gave us a little bit of a head-fake when we first saw it.  To look over the identical player decks that everyone starts with and the planets and ships each player is looking to colonize, one might be tempted to think this was a deck builder of some sort.  But in actuality Take The Galaxy is a trim, neatly-designed set collection/card drafting game set in a brand new galaxy, where each player’s faction is rushing to colonize planets, gather resources, and investigate alien life and technologies in order to claim the greatest renown and (bum bum buuuum!!!) Take The Galaxy! 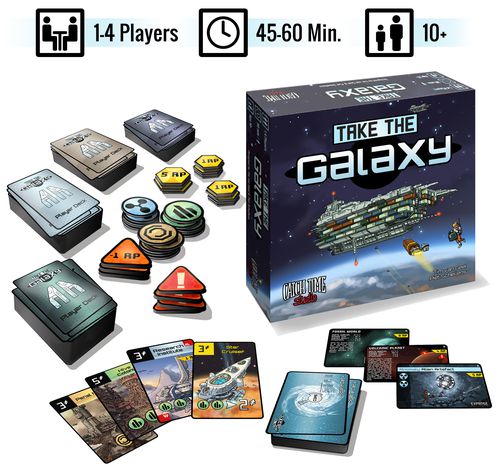 Gameosity received a review copy of Take The Galaxy.  We were not otherwise compensated.  Take The Galaxy was funded on Kickstarter, and a few of these images are from their campaign (they’re really nice), but this is not a preview – Take The Galaxy is fully finished and currently available!

A game of Take The Galaxy plays out over a series of turns (shocking, I know), where each player will use resources from their deck to colonize planets, build ships, and study anomalies in a quest to collect the most renown and dominate the galaxy.

Almost every action in Take The Galaxy uses one of the four currencies – Manpower, Science, and Production – and collecting and converting between these currencies forms a core part of the game’s economy.  There’s also a fourth currency, Credits, which is paid by discarding cards from your hand.  Turns are very dynamic – you don’t keep resources from one turn to the next – so you’ll be focusing primarily on building up your economy to support bigger and bigger actions as the game progresses.

Of course, colonizing worlds is the shiny part of what Take The Galaxy is all about, so each turn players will have the opportunity to claim one of the systems from the ‘Explored Space’ track.  In order to claim a system, though, you have to be ready to colonize it – each system has a number of slots for potential colonies, and you must fill at least one on in the act of claiming a system. 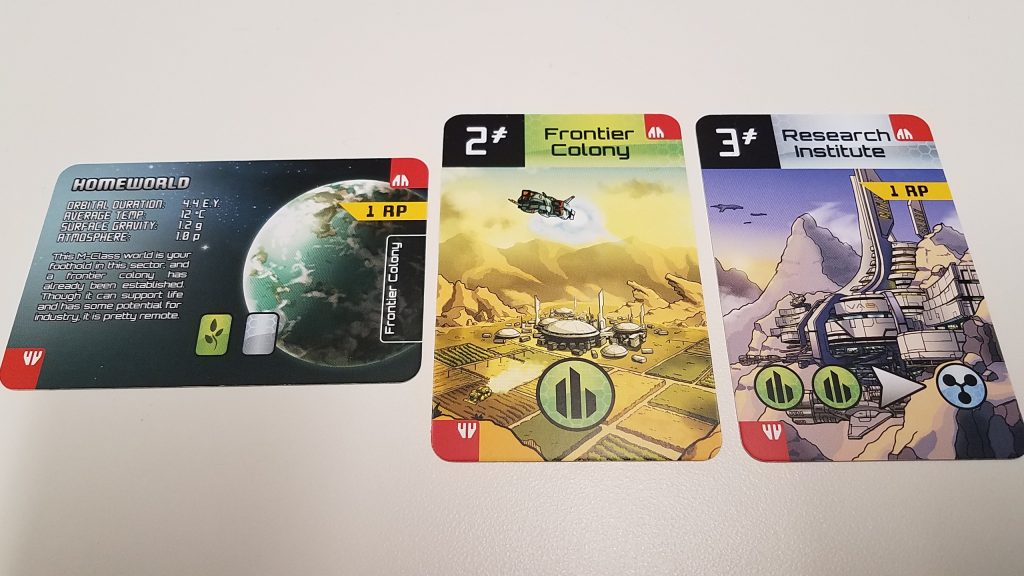 Colonies provide points and often also either generate resources or allow you to convert between different currencies.  The powers granted by colonies can be used once per turn, letting you reap the benefit of their utility over and over again throughout the game.

Andrew:  So colonies are generally pretty rad and the more you have of them, the more flexible and powerful your economy tends to be.  So what’s to stop you from just dumping out as many colonies as possible?  Well, that’s where we get to some of Take The Galaxy’s most interesting design choices.

Interestingly, despite the fact that Take The Galaxy is a game about exploration, it’s also a game about managing limitations and about making the best choice based on your current circumstances.

Jess:  Limitations?  Well that’s no fun – I want all the everything!

Andrew:  I hear you, totally, but the cleverness of Take The Galaxy’s design, I think, is how you can never just take and take; instead, you’re constantly looking to extend your reach within the limits of what you can manage on any given turn, lending a neat turn-by-turn tactical challenge.

For example, each system can only support limited numbers and types of colonies.  It’s also true that you can only ever control 4 systems at a time, and in order to take on a 5th, you must relinquish your control over whatever system you’ve been holding onto the longest.  That means you’re constantly load-balancing the value of keeping the colonies you’ve got versus grabbing new systems and building new colonies.

This design concept goes even further when we recall that each player’s deck is identical – this isn’t a deck building or even deck construction game, and everyone ultimately has access to the same pool of resources.  But because the shuffle means you’ll be drawing cards randomly from your deck, you’ve got a natural limiter on what options you can take on any given turn, and getting good at churning through your deck when you need to can sometimes make the difference between a good play and a great one.

Jess:  I don’t know, I’m not entirely sold on all this.  I like the things I build to last – that’s the fun of building!

Andrew:  Well, Take The Galaxy has that covered in a couple of different ways.

In addition to colonies, each player can build ships.  Functionally quite similar to colonies, ships don’t ever go away, constantly providing their benefit regardless of the churn of claimed and relinquished systems.

Further, the systems relinquished by players when they acquire new ones don’t really go away – they leave play, certainly, but they go into that player’s score pile and will be added up with the rest of the player’s renown at the end of the game.  And while the colonies attached to those systems leave play when the system gets scored, those cards get shuffled back into your player deck, meaning that you’ll have a chance to build those valuable colonies again on future turns.

Even the cards themselves are a limited resource – you discard cards as Credits, you lock cards into systems when you use them as colonies, and you’ll generally be constantly managing your hand in order to have the resources you need to make future plays.

Andrew:  So I think we’re a little divided on Take The Galaxy, eh?

Jess:  Just a bit, yeah.  I enjoyed it, but I found it sometimes hard to feel like I was doing anything really permanent.  It was super satisfying to drop a valuable colony on a desirable system, but the restrictions placed on expansion and the need to constantly consider letting go of hard-won parts of your resource engine left me sometimes feeling like I was running on a treadmill.

Andrew:  And I liked it for those very same reasons.  The cost/benefit analysis was the fun for me, and while I completely agree that the choice about how best to keep your economy running while still making gains was occasionally a hard one, that added a nice arc of tension for me.  Now, that said, the design definitely lent itself to lots of tactical decisions, what to do turn-by-turn, without really allowing for strategic ones.  And that general lack of long-game strategy is only reinforced by the fact that every player’s deck is identical. 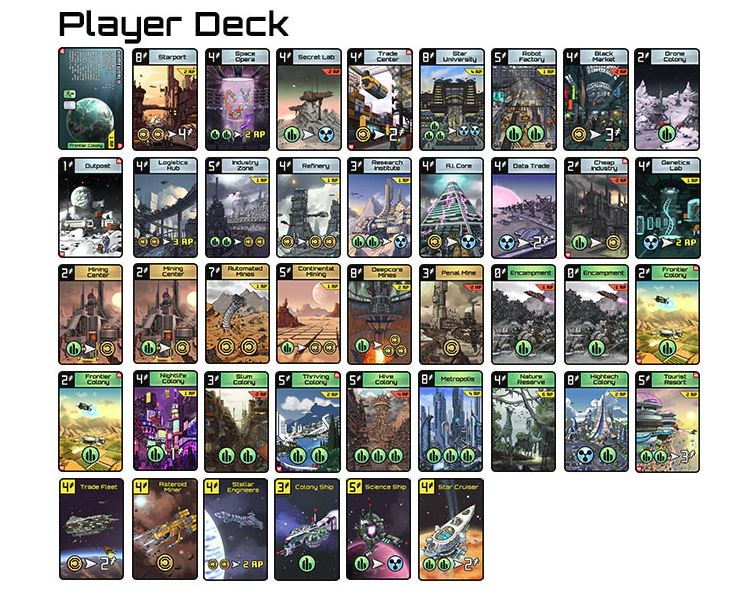 Jess:  That didn’t bug me, honestly.  The relative absence of long-term strategic planning in a ~35 minute card game didn’t lessen Take The Galaxy’s good bits.  And there were definitely good bits!  The concept of everyone having an equal pool of cards to draw from was a really choice, especially given that you don’t do any building/manipulation over the course of the game.  And I loved the aesthetic, too.  It just felt like Take The Galaxy was somehow missing something for me – when I imagined a galaxy-spanning empire, I guess I imagined more than 4 cards at a time.

Andrew:  I get where you’re coming from, totally.  But from a mechanical design perspective, I really appreciated what Take The Galaxy did and didn’t do.  It felt very well-considered, and my concerns are pretty minimal in the face of really enjoying our time playing it.  I love the focus on constantly building and rebuilding your economy, and I found it very dynamic despite the fact that everyone ultimately had the same resources at their disposal.

Worth noting, there’s a cool team variant of Take The Galaxy that lets you work with a partner to gather renown and conquer the galaxy.  In this variant, you have access to any colonies or ships your teammate didn’t use on their turn, so coordinating well with your partner will let you make bigger plays faster, which is always fun!

Jess:  I liked the teamwork variant a lot, actually, because working with a partner made for more interaction, faster acquisitions, and less potential for turns where you don’t feel productive – maybe I didn’t have the cards to make use of my colonies and ships, but maybe my partner can instead.

Andrew:  Agreed!  Take The Galaxy is mostly multiplayer solitaire (it can even be literally solitaire, if you want), but the teamwork variant adds interactivity that I liked, too.  Not too much, you’re still very much playing your own game, but just enough to keep things interesting!

Take The Galaxy can be ordered directly from Catch Time Studio, and we recommend it for anyone interested in this unique take on exploration and economy-building.