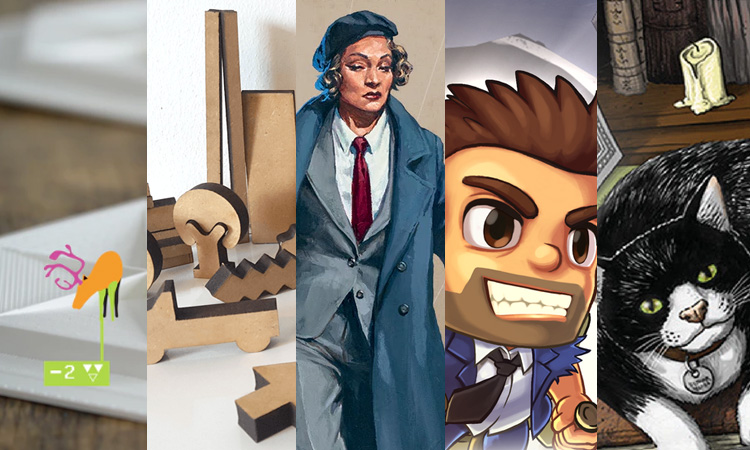 It’s a hot, hot, hot July! What crowdfunding delights will this month present us with? Well, let’s check out what’s on offer this week! 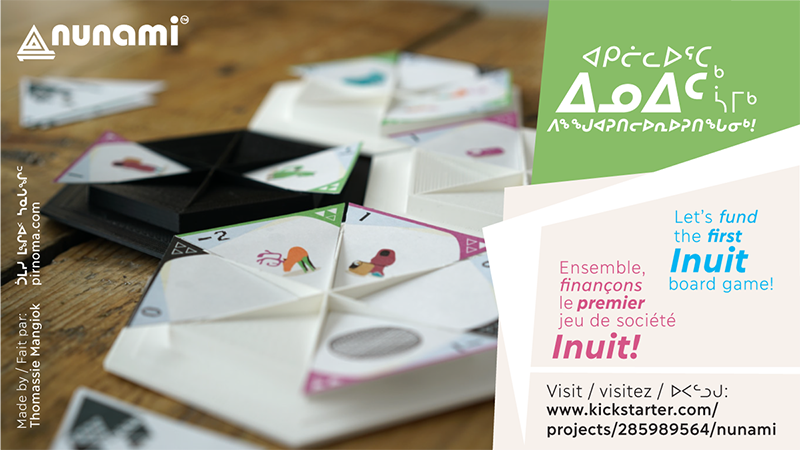 I took one look at Nunami and was instantly intrigued. It is an area influence game of man vs. nature. Players will take turns placing cards and flipping nearby cards face-up in order to score points. Bases score once they are filled and points are awarded to the player who has the most cards of their color on the base. You can also gain points depending on what number the cards on the base add up to. The purple player is looking for positive values while the green player needs negative values. 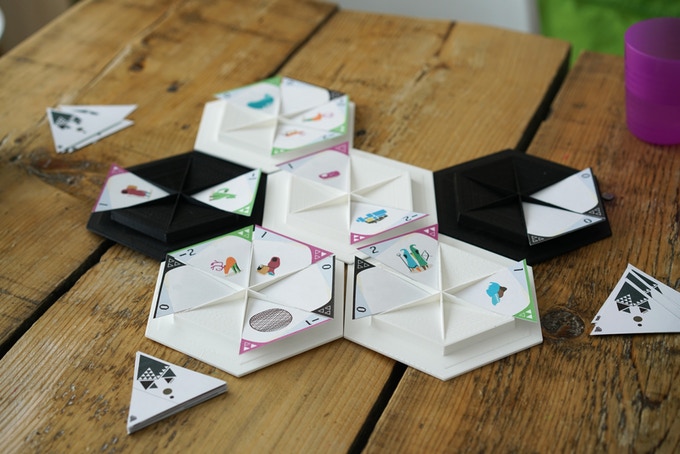 Simple, beautiful, and charming, Nunami is the first Inuit designed tabletop game and is meant to promote an understanding of ensuring co-existence between mankind and nature. Honoring that idea, the designer, Thomassie Mangiok, is making the game water resistant so players can enjoy Nunami outdoors. I really enjoy hiking and camping and this seems like a nice addition to the small pile of games that I can take with me on those kinds of trips. Take a look at Nunami here on Kickstarter.

In BILDER players use a multitude of wooden pieces to try to convey ideas. On your turn you will draw a WHAT card, that gives you a choice of two ideas you need to evoke, and 3 HOW cards to choose from, these will dictate a rule you must follow while building. For example you might draw a WHAT card that says “Summer” and a HOW card that says “Your wrists must touch the entire time you are Bilding”. 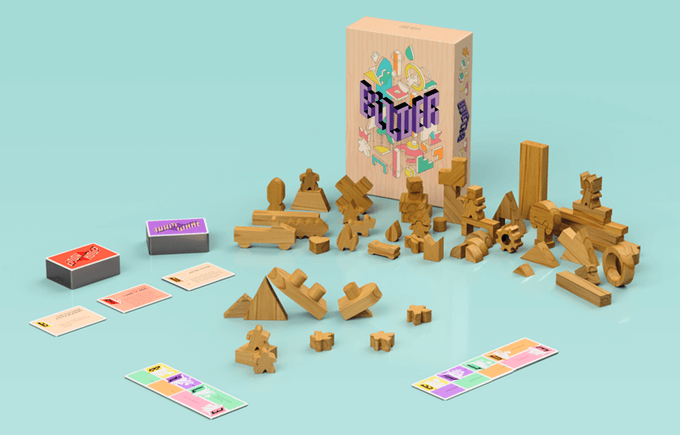 When a player guesses what you are building correctly, they earn the WHAT card and you win the HOW card. These cards all provides a letter and once you collect enough letters to spell BILDER, you win. I really love all of the different wooden pieces and the Kickstarter provides you a bunch of different pledge levels to add a ton of extra bits. If BILDER sounds like your jam, go check it out on Kickstarter here. 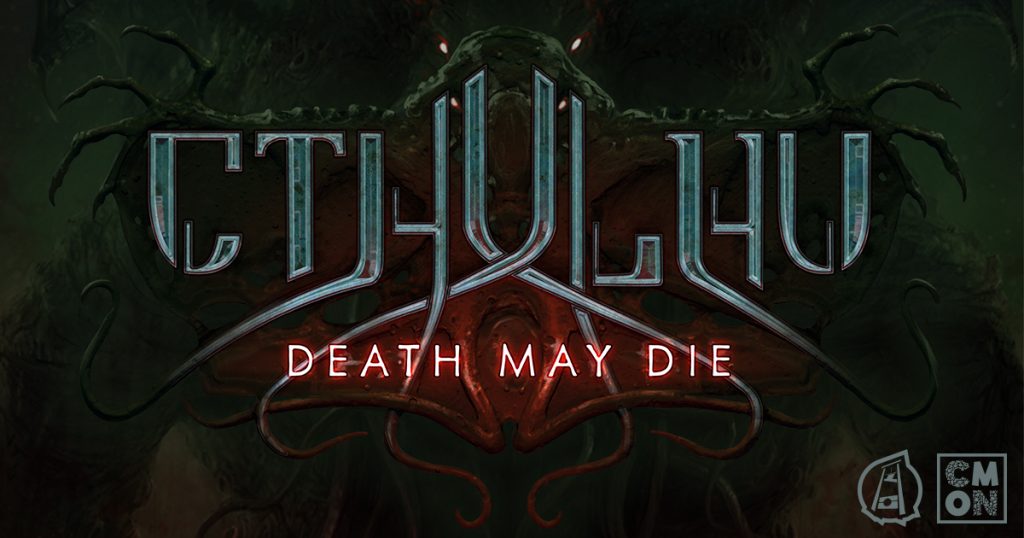 In typical Cthulhu-game style, Cthulhu: Death May Die is a cooperative game where players must thwart the efforts of crazed cultists who are trying to summon an elder god. Usually in these situations, the best you can hope for is to stop the summoning, send the monstrosity back to where it came from, or drive a boat into it hoping to knock the thing unconscious so it sinks beneath the waves to slumber upon the bottom of the ocean for another eon. Cthulhu: Death May Die changes the narrative by empowering the players to actually kill one of the elder gods. Yep, you heard that right. You actually get to finish one of these cthuloid beasts from beyond the pale for good! 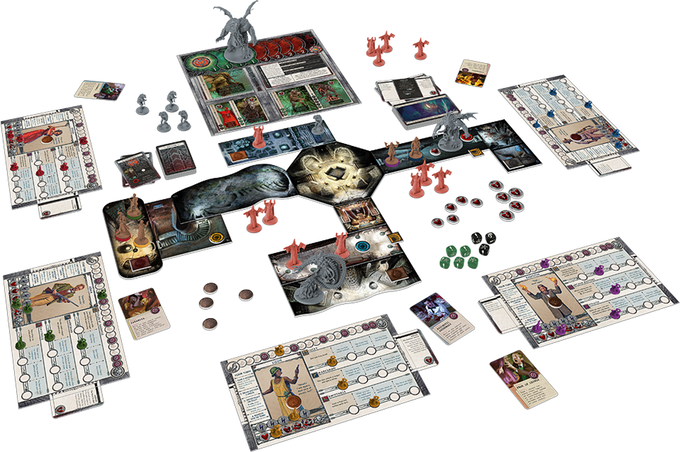 Designed by power team: Rob Daviau and Eric M. Lang, Cthulhu: Death May Die sets the players as investigators with dubious mental states. Madness is double-edged blade, providing you power as you go ever nuttier, but there is always a risk of losing your mind completely.

The game is modular, allowing players to choose which elder one they will be fighting (Hastur or Cthulhu) and one of the six available episodes to create different stories each time they play. This kind of set-up means the game will be easy to expand and they already have the exclusive R’lyeh Rising expansion as part of the Kickstarter. If you want to finally stick it to those betentacled monsters that have plagued the universe since the dawn of time, go check out Cthulhu: Death May Die on Kickstarter here!

I am delighted by the quirky story of Jetpack Joyride. In it,  Barry, a struggling gramophone salesman (Really Barry? Gramophones?), breaks into a secret lab, steals a jet pack, and must make his escape. This game is based on the side-scrolling endless runner/action video game of the same name from Halfbrick Studios. 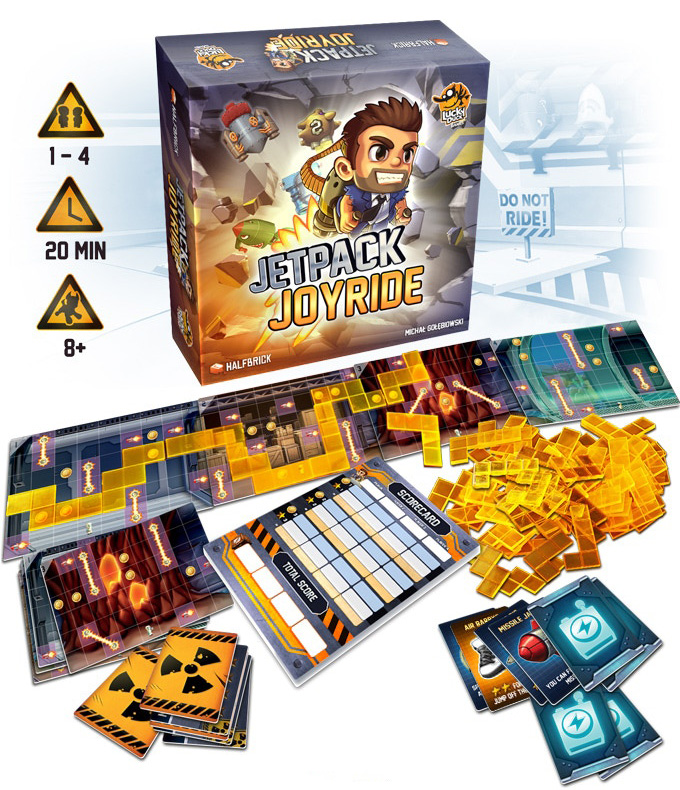 To play, you’ll be creating a row of 4 lab cards which players will try to navigate through using tiles. If you construct your path wisely, you’ll be able to grab coins and complete missions for points. The round ends when 1 player manages to create a path to the exit and players will then get to choose a card that will act as a permanent bonus through the following rounds. At the end of the game it isn’t who finishes first that wins, but the player who has earned the most points from their flight paths. What I like about this one is, even though it is a real-time game with players rushing to finish their placements first, there is no timer. So if everyone at the table wants to take their time, they can. This also makes it easier to play with younger players who might need more time to make choices. Learn more about Jetpack Joyride here on Kickstarter.

Cathulhu – Tails of Valor and Terror

Yep, Golden Goblin Press went and did it. They’ve written up not one, but two collections of cat based adventures and stories for the CATHULHU roleplaying game (available now on DrivethruRPG.com) where the investigator are adorable little kitty cats! 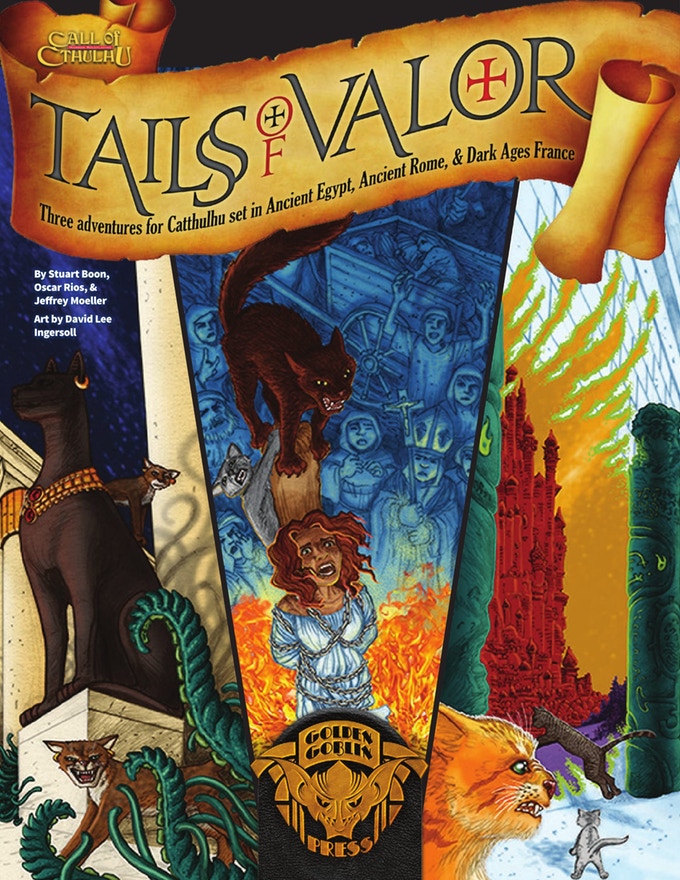 Tails of Valor and Terror volumes 1 contains 3 adventures for brave kitties and volume 2 has thirteen cat themed horror short stories to get you in the mood for some whisker-whisking action. Can your friendly feline best the horrors that creep into our world from beyond? you’ll have to play to find out! Check out Tails of Valor and Terror on Kickstarter here!

That’s a whole lotta fun games to back! Which ones are you checking out? Which Kickstarter should I check out next? Let me know in the comments below!