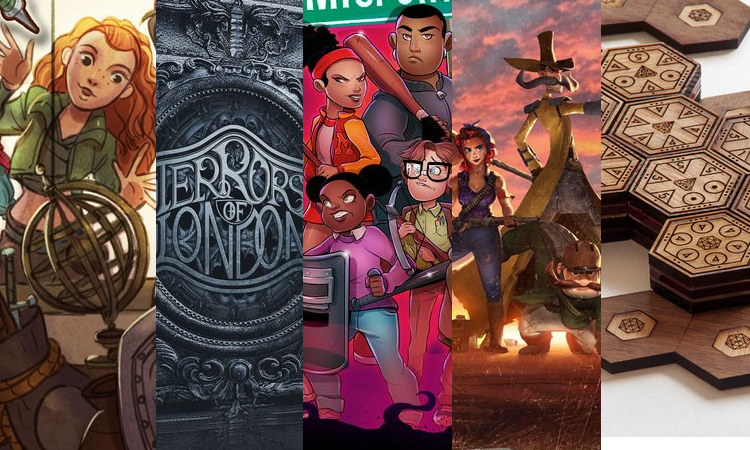 With gen Con wrapped up, it’s time to relax with a nice frosty mug of… Kickstarters! Let’s see what caught my eye this week! 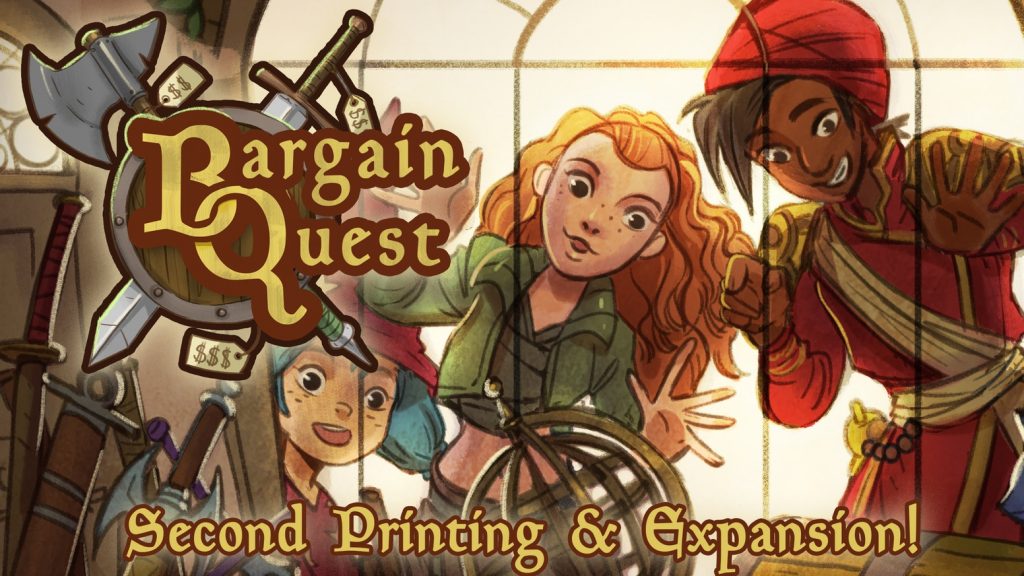 Oh man, I do love playing roleplaying games. Going on adventures, defeating monsters, getting loot, and spending that loot in town. It’s fun to be the hero, but sometimes it’s just as fun to be the salesman as much as it is to be the adventurer (and a heck of a lot less dangerous).

In Bargain Quest the players are shopkeeps looking to make as much cash as possible off of the heroes that come to town. You’ll draft items to put on display in the hopes that whoever visits your shop will be able to use them. Heroes will come in and buy up your stock and whatever money you get can be spent on upgrading your shop and hiring employees. its a fun look at the other side of adventures and this Kickstarter is extra special as it also includes the new Black Market expansion!

I got a chance to play Bargain Quest with creator Jonathan Ying at GDC and it was a total blast! It reminds me of video games in the Atelier series. Definitely check out the Bargain Quest Second Printing and The Black Market Expansion on Kickstarter here! 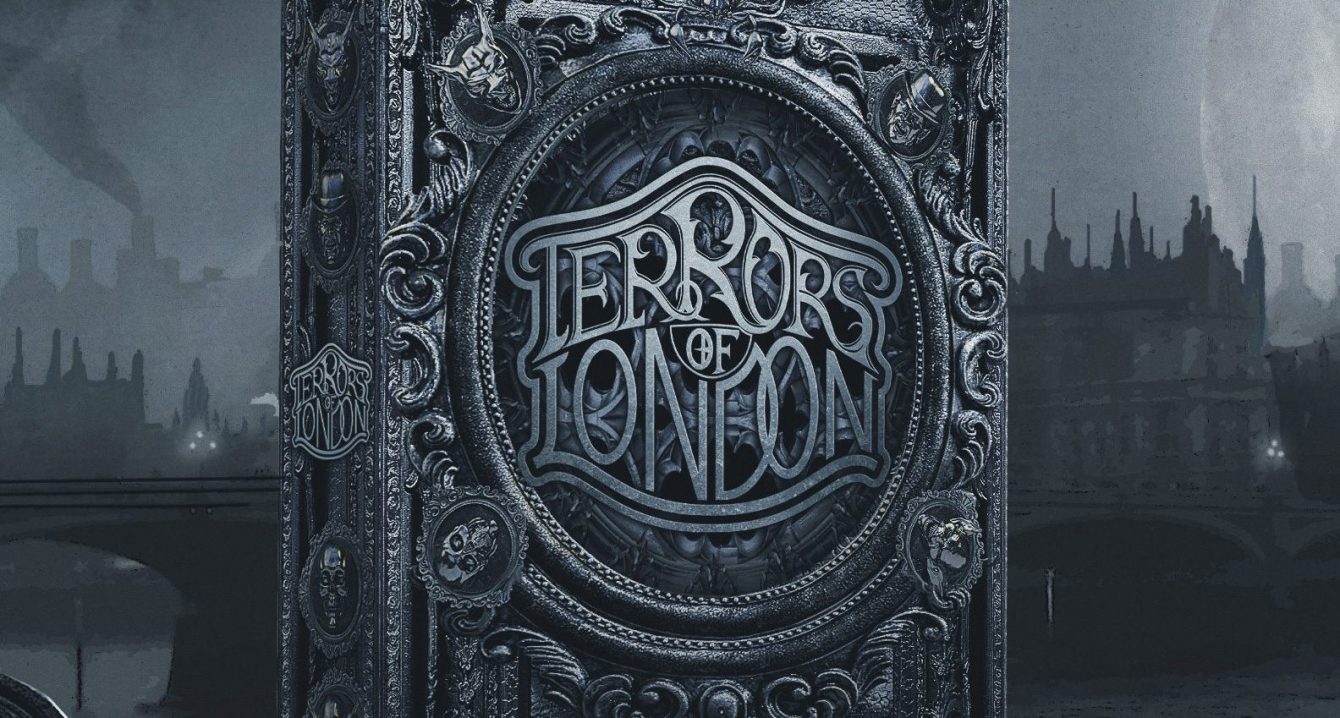 Victorian horror crossed with competitive deck-building is what Terrors of London is all about. As overlords of London, players must eliminate their opponents using Beasts, Mortals, Spirits, and Undead.

The game has a neat mechanic where monsters can form powerful hordes; streamlining play and making it more beneficial to add cards from different factions to your deck instead of specializing in one type. There are also item cards called relics which can come into play the moment you purchase them instead of being mixed into your discards for later. I love the asthetic and the play time (20-40 minutes) is just about right for me. Learn more about Terrors of London on Kickstarter here!

The Curse of Misfortune Lane 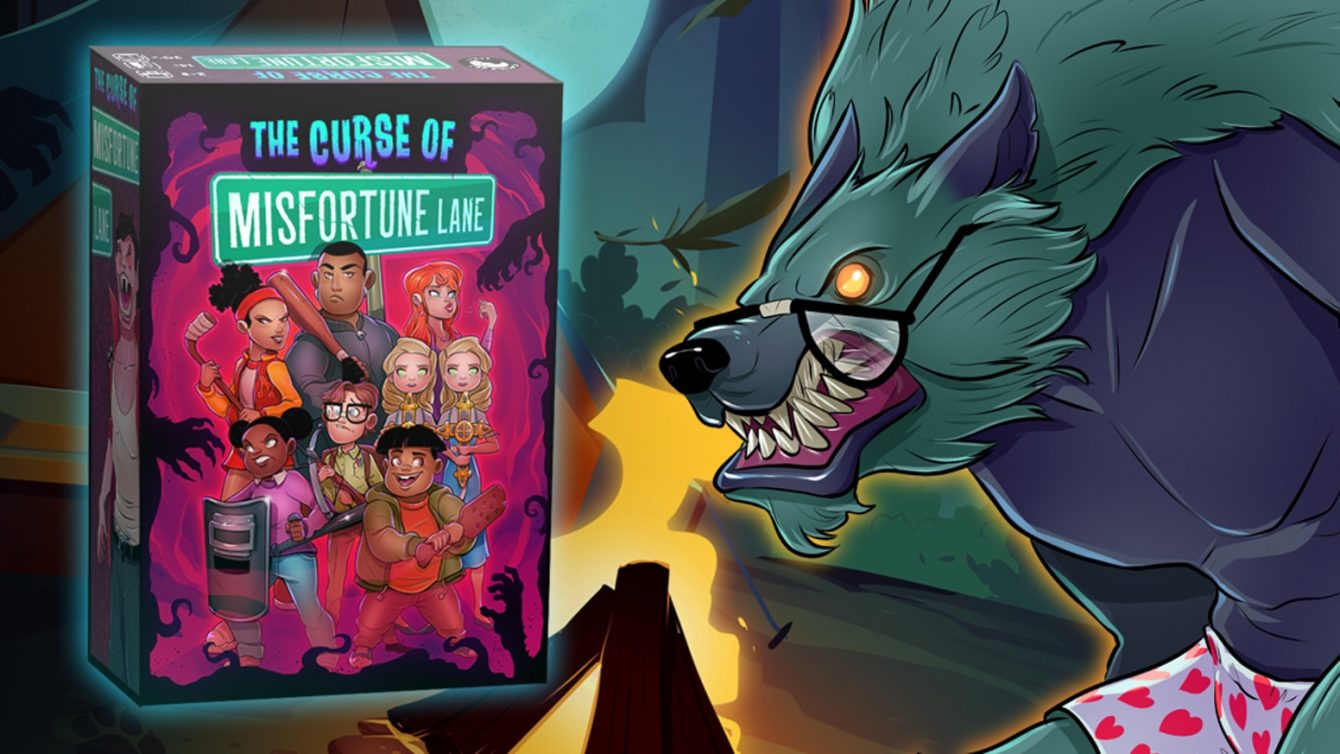 There’s a horrible curse on Misfortune Lane that causes monsters to attack! It’s up to you and your friends to stop it! In The Curse of Misfortune Lane one player is a terrible monster and the rest of the players are the kids who will work together to stop evil in its tracks. While the monster player’s identity is not in question, you won’t know what kind of monster they are. So deducing their monster type will help you fight them when the time comes. 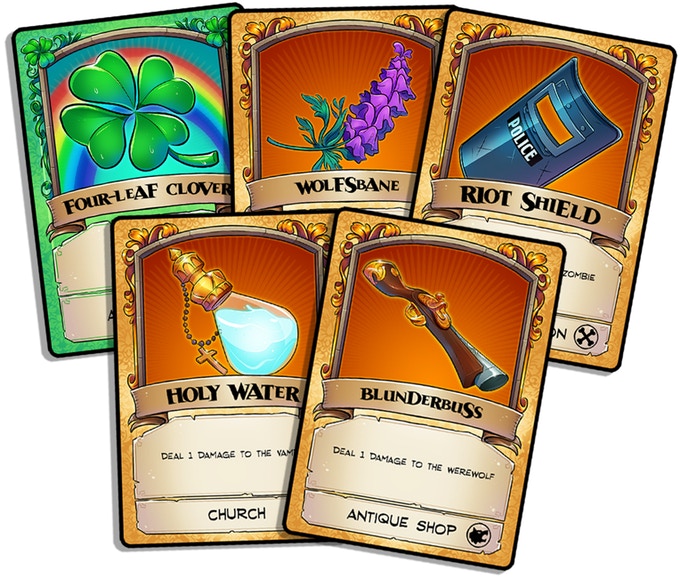 The game is played in two phases: Day & Night. During the day, the kids will search around town for items to help them in the coming fight, while the monster will play Bad Luck cards on the kids trying to trip them up.

During the night phase, the monster’s type is revealed and their powers activate. The kids will have access to the supply cards they have stockpiled from the day phase and must now fight the monster. If they can defeat the monster before the end of the 7th round they win otherwise the monster wins and the curse of Misfortune Lane remains unbroken.

This game looks perfect for family night or to play with your friends after binging Stranger Things. I like that the deduction element is played out through the cards instead of trying to convince people of your identity through talking (although roleplaying wouldn’t be amiss here). Check out The Curse of Misfortune Lane here on Kickstarter.

Moonshiners of the Apocalypse 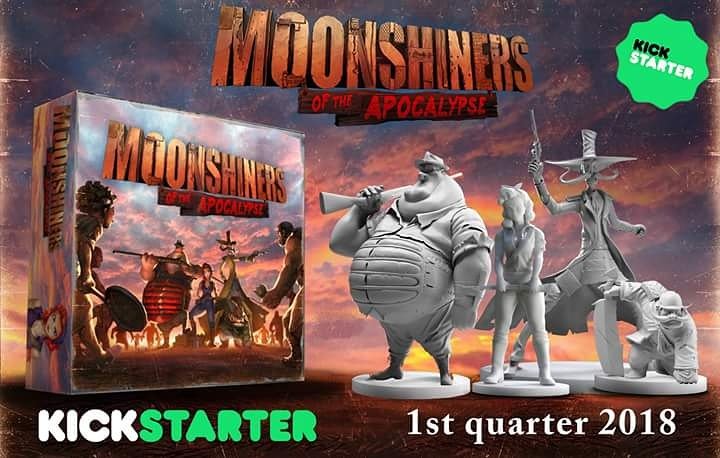 With the zombie apocalypse breathing down your neck and the only hope for rescue is an expensive hot air balloon ride, making a heap of cash brewing moonshine might just be your only option. Just like in The Curse of Misfortune Lane, Moonshiners of the Apocalypse plays out over two phases. During the day you’ll build up your shanty town, scavenge up resources, and challenge drunkards to fight. At night the drunkards go to work scaring off your survivors.
During the Night, Shanty Town’s Drunkards are on the prowl, looking for your buildings. Whenever they find one, your Survivors are scared away. 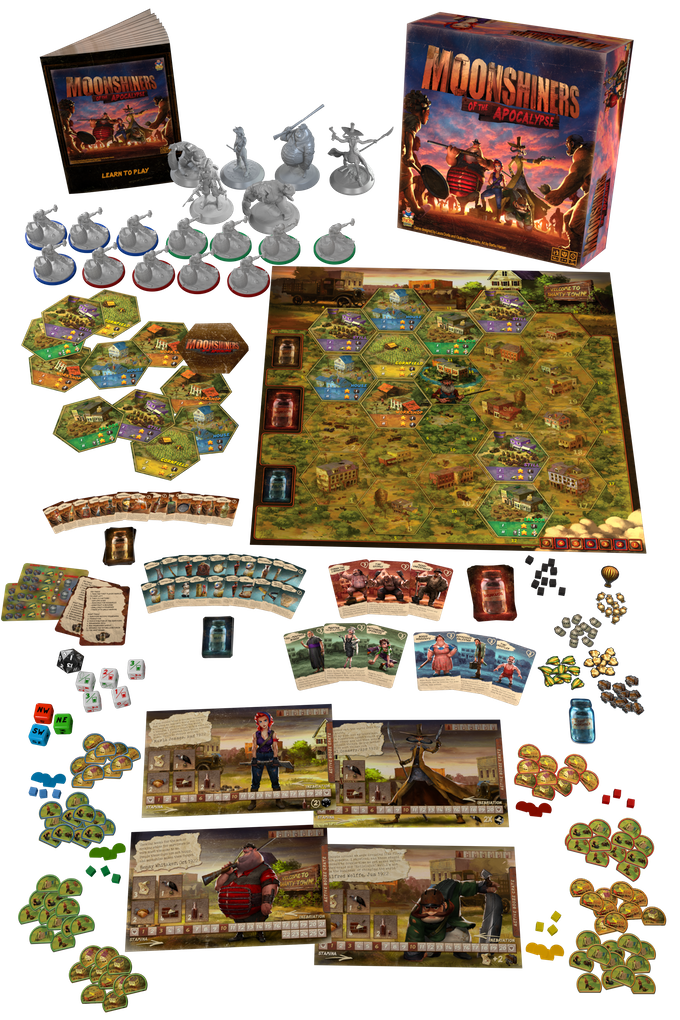 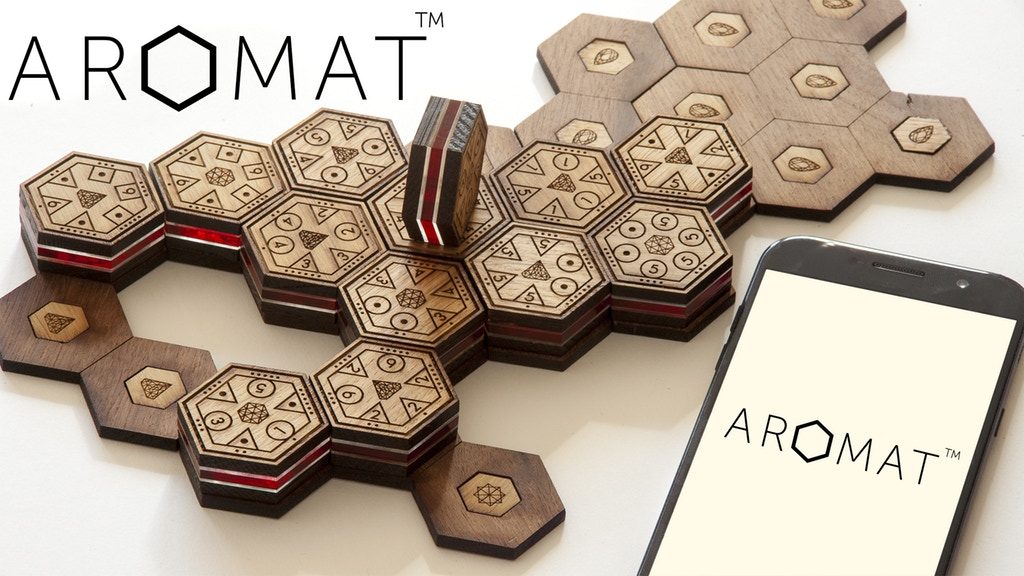 I am such a sucker for beautifully-designed, hand-made games. Armoat is an abstract, tile-placement game that comes with a mobile app that keeps track of your scoring. Players will take turns placing tiles and gaining or subtracting points based on their placement. With clever placement you can greatly affect your opponents score as well as your own. 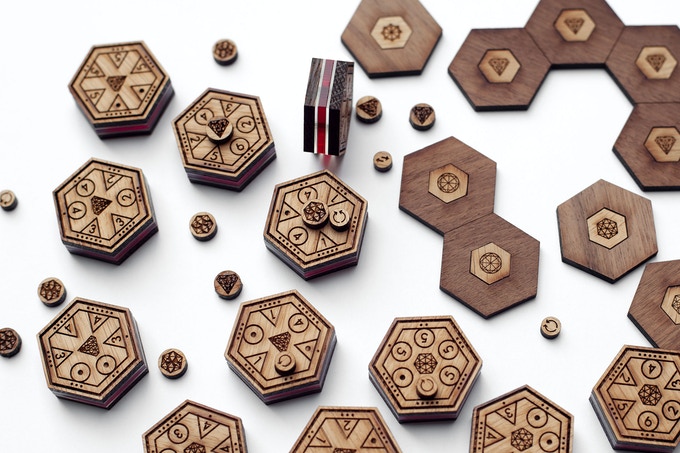 Aromat looks like it encompasses a lot of the same strategic platy-style as chess while being gorgeous to look at. With a predicted delivery date for November, this could be a great gift for the holidays. Go check out Aromat on Kickstarter here!

Which games are you backing this week? Let me know in the comments below!