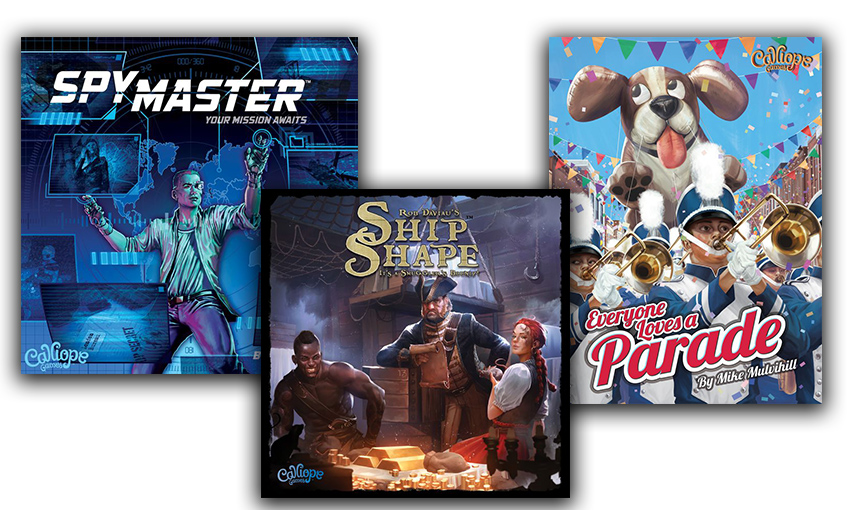 While at Gen Con I got to see a couple of exciting new titles from Calliope Games. Three new games will be Joining their Titan Series (a line of family-friendly games designed as fun introductions to different aspects of board games): Spymaster, Ship Shape, and Everyone Loves a Parade. 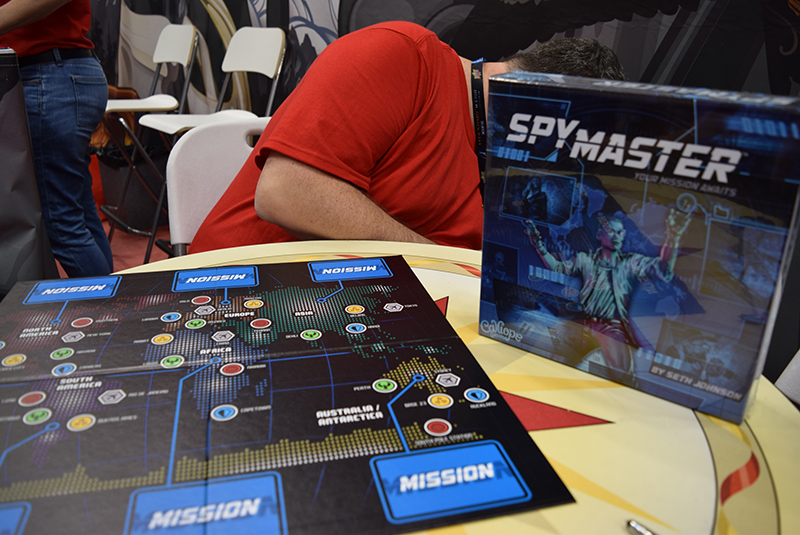 Designed by Seth Johnson, Spymaster is an Area Control/Set Collection game about the shadowy world of international spies. In the game all players will be using agents to try to complete missions around the world. The Spymaster (first player) will make piles of intelligence cards using the “I cut, you choose” mechanic. All players will each take a stack, with the first player getting the last stack, then use the cards they have to move the agent meeples around the board in order to complete missions. At the end of five rounds, whoever has the highest value in accomplished missions plus bonuses wins the game. 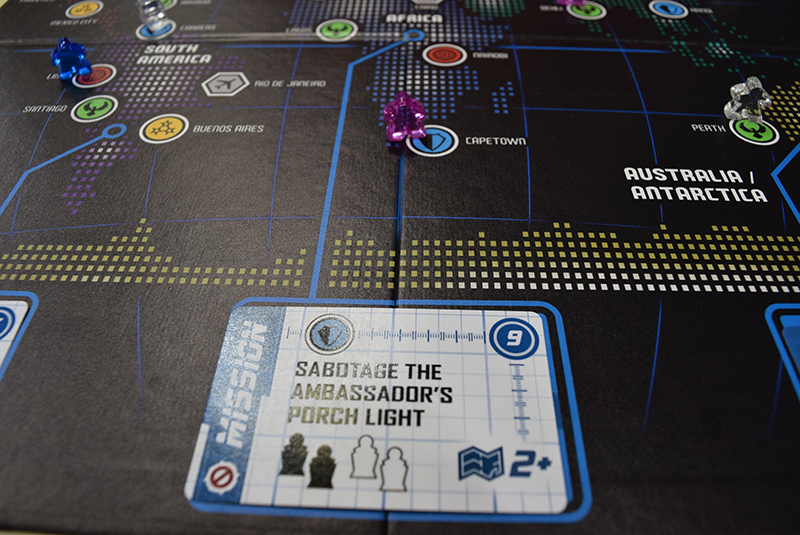 Jess: I like “I cut, you choose” games because you really have to think about what options you are giving the other players and try to think about what they might be looking for. There’s a lot of cost-benefit analysis that needs to happen in order to make sure you are left with a pile that will benefit yourself. Spymaster looks like it will be a good introduction to the mechanic while maintaining enough depth to keep experienced players entertained. 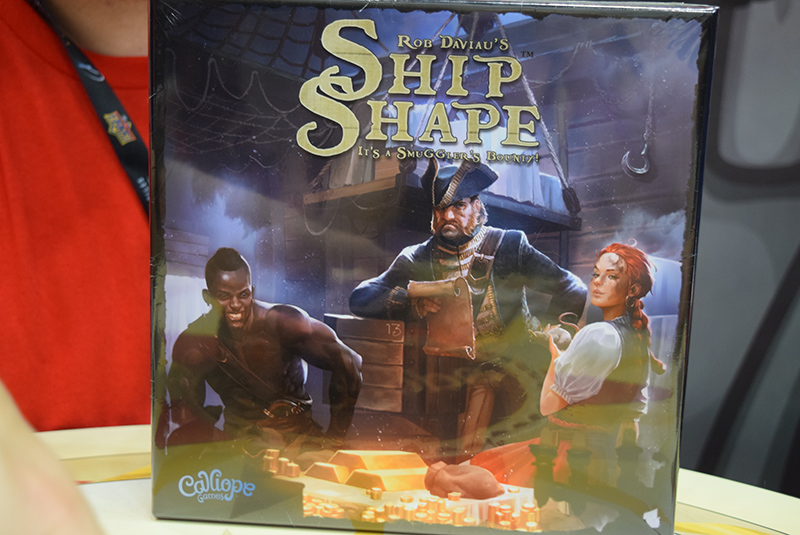 Rob Daviau’s Ship Shape uses a really neat mechanic to give you a game that feels like a episode of Storage Wars featuring pirates. Each player is a pirate captain who is bidding on unique crate tiles that they will place in their ship’s hold to score points. 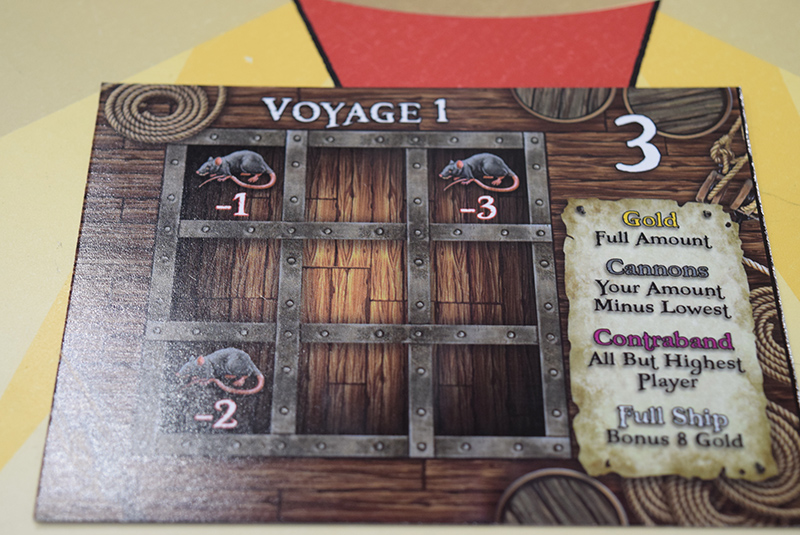 The tiles are where things get interesting. When the game begins the tiles are placed in a stack. Each one has sections cut away so as you look down into the stack you can see some parts of the tiles that lay beneath; giving you some idea of what each tile might contain. 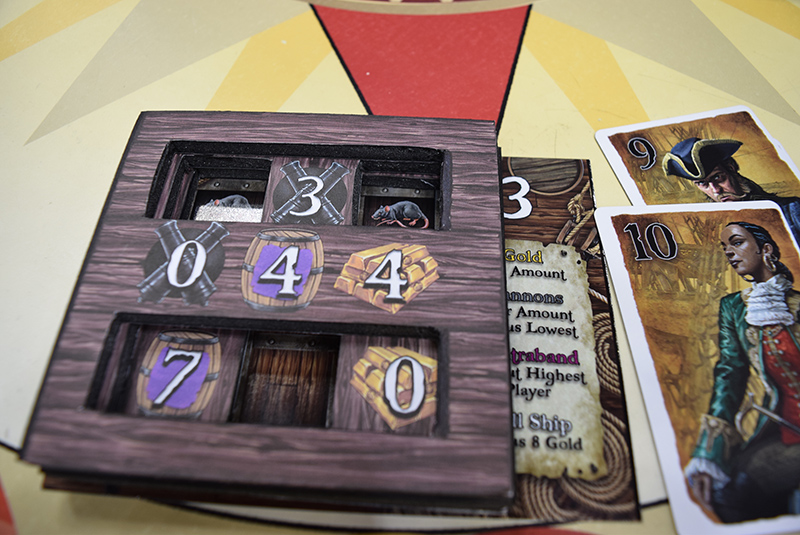 You’ll want to get the tiles that will fill your hold with gold, cannons, and not too much contraband, lest the port authority catch you. Each player will bid on their place in line to take tiles. Bid really high and you might go first, but maybe you don’t want that top tile. You’ll need to tap into your intuition about how the other players will bid in order to secure the tile you want.

Jess: I really like the design of the cargo tiles and I just know Andrew is going to crush me at this game as he is a beast when it comes to psyching players out. Also I am loving the art direction in Shipshape. Even though Calliope had three different artists working on the game, it has a cohesive and beautiful look. 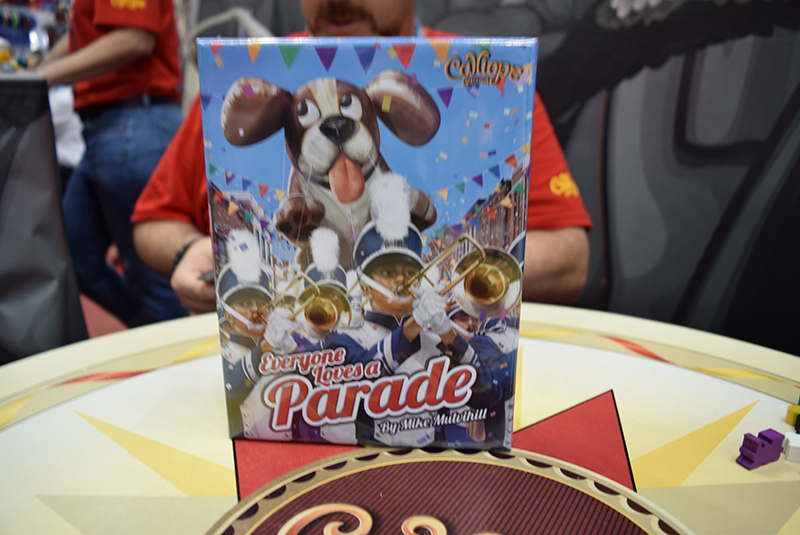 Everyone Loves a Parade is a family-friendly game played over three rounds where everyone is trying to create the most exciting parade floats. All along the parade path are crowd cards. These cards are the parade fans who have preference for certain features and colors they want to see as dictated by dice, rolls so you’ll need to grab items from the warehouse to craft your floats in ways that make them happy. 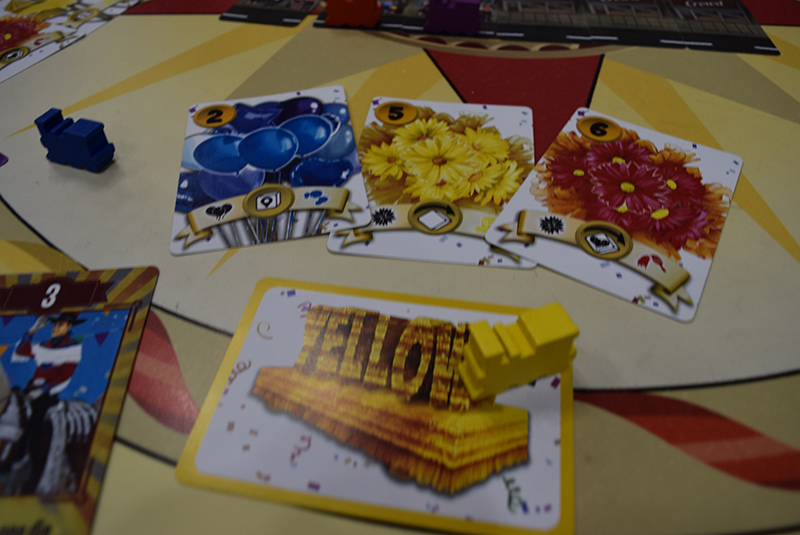 The decorations you add not only give you a chance to score points, but they also also give you immediate, one-time-use powers like allowing you to move or reroll the dice. Once you have added 3 cards to your parade float the parade will begin. Depending on Players will draw numbered cards to see what order they will get to place their floats in. Where you place your float is important as you want to put yourself on a crowd card that will net you the most points. By making a float that appeals to a multitude of cards you have a better shot at securing a good score. The player with the highest score after three rounds wins and becomes the Grand Marshal! 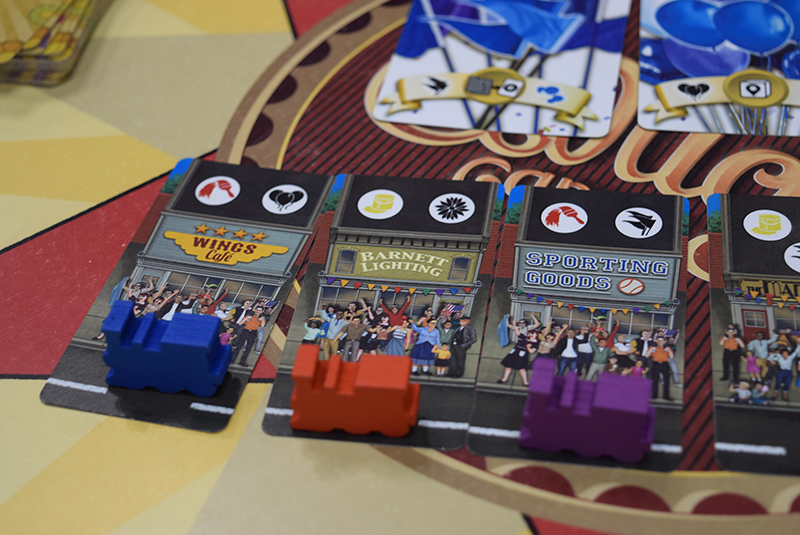 Jess: Everyone Loves a Parade is a light, easy to learn game that looks perfect for the whole family. The theme and bright art can excite kids and there’s enough strategy that adults will have fun too.

Spymaster, Shipshape, and Everyone Loves A Parade or some of the most exciting titles to come from the Titans Series yet. You’ll be able to pick them up at your local game store or online when they release in late 2018. Keep an eye on the Calliope Games website at Calliopegames.com for more info.