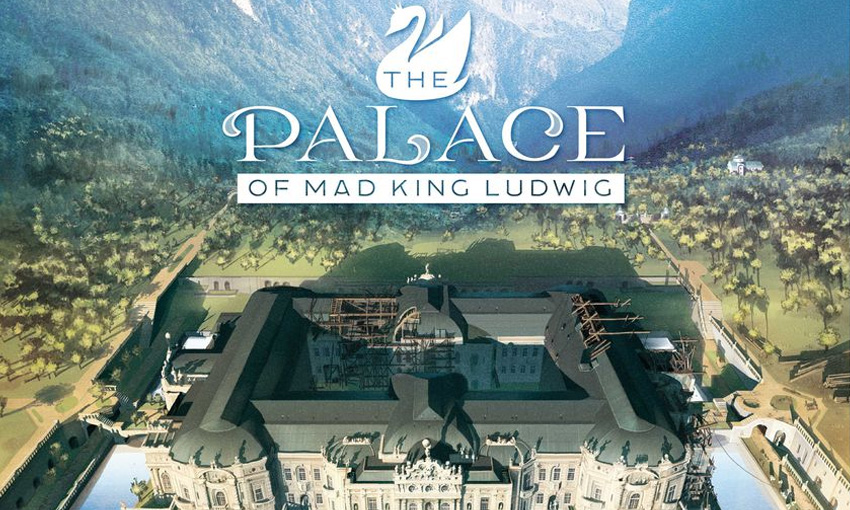 The Palace of Mad King Ludwig is a contentious tile-laying game that shares a lot of DNA with its spiritual predecessors, Castles of Mad King Ludwig and Suburbia.  However, those games do more with less, and ultimately we found that Palaces simply didn't innovate in ways we appreciated.

The Mad King is at it again!  First, he had you build a bunch of castles.  Then he added some secrets.  Now, he wants a palace!  In The Palace of Mad King Ludwig, players will work together to build up a palace, one room at a time, in an effort to garner Ludwig’s favor.  But make no mistake – even though everyone’s working on a single structure, The Palace of Mad King Ludwig is nothing close to a collaborative game, and only one architect will impress the king and win the day.  You’ll have to hurry, though, because the palace moat is closing in on all sides, and space gets tighter by the turn!

Gameosity was provided a review copy of this game by Bézier Games.  We were not otherwise compensated for this review.

Andrew:  Yeah.  That zany dude has served as inspiration for more than a few of the titles from Bézier Games.  He’s basically Ted Alspach’s version of H.P. Lovecraft.

Jess:  Hehe, yeah, it can feel that way.  Think about it – a mad genius, obsessed with infinitely complex structures, designed to both delight and terrify.

Andrew:  And most recently, overrun with a near-infinite number of inhuman beasts…

Great Old One comparisons aside (and we mean completely aside, there’s no Cthulhu in here), The Palace of Mad King Ludwig is a tile-laying game.  In it, the players will take turns adding rooms to the ever-expanding palace that everyone is working on simultaneously.  Most rooms comes from one of several ‘suits’, and each player tracks which rooms they add, working toward point bonuses earned for placing sets of 5 of the same type of room, as well as bonuses for placing sets of each kind of room. 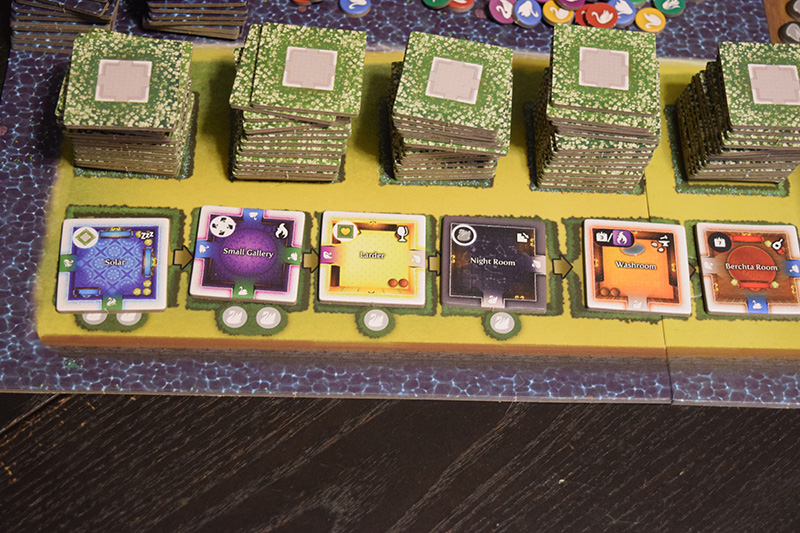 Andrew:  The Palace of Mad King Ludwig is pretty generous with its bonuses.  There are lots of different scoring opportunities each game, and that can be great if you find yourself getting edged out of one category of points – it’s possible to shift strategies mid-stream.

Jess:  That’s true, but one of the downsides of this particular point salad is that it can slow things down quite a bit when players have a lot of options to assess against.  The per-turn decisions in The Palace of Mad King Ludwig aren’t complex at all – you’re almost always just picking a tile and placing it – but which, where, and how all have consequences that you’ll want to look at to stay competitive.  It’s all about calculating how best to get that next cascade of points – and swans.

Swans act as both the currency of The Palace of Mad King Ludwig as well as an endgame scoring set collection bonus.  So each time you’re tempted to spend some of them to get exactly the tile you want, you’re also undercutting one of your point-scoring opportunities, which adds yet another factor to be considered when assessing your action for the turn.

Once enough tiles have been added to the palace, the moat begins to swell and grow, flowing around the outer edges of the structure and penning players into an ever-decreasing number of spaces where they can place new tiles.  Once the moat has encircled the palace completely, the game is over, points are tallied, and a new best architect is crowned.

Jess:  I hate to beat this drum again, but the rules for how the moat comes out were just a touch fussy, slowing down our turns whenever we needed to strategize about where to place them. 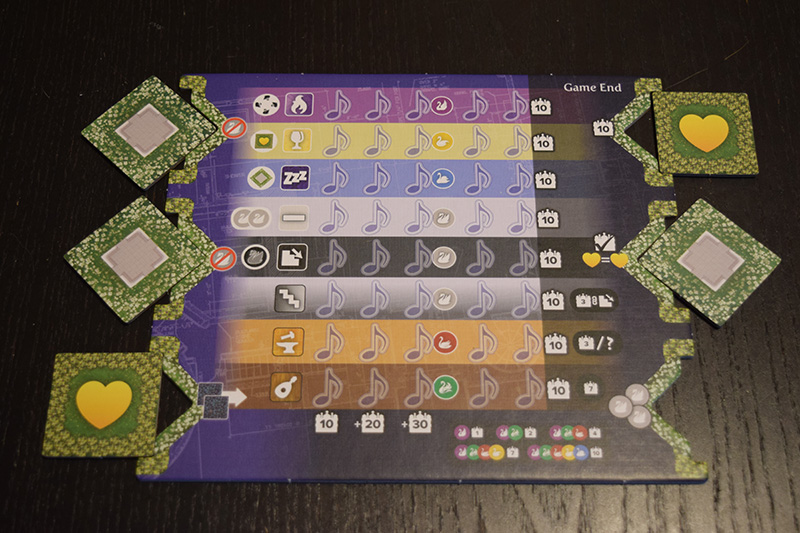 And that planning is actually really important, because The Palace of Mad King Ludwig is also a highly contentious game, an attribute which will either be a positive or negative, depending on your druthers.  Often, your best move is to place tiles in such a way that it screws up something your opponents were trying to build, and few things are more dissatisfying than realizing your current strategy hinges on your opponent not disrupting it.  This is where the moat really comes into play, since it’s a great tactic for cutting off players demonstrating the temerity to build at the outermost-edges of the palace.

We liked that many of the goals were simply comparative – having the most or least of a given type of room, for example – because they added a sense of chase and indirect competition, but these too caused us to slow down our turns and assess against each other’s current control over the palace. 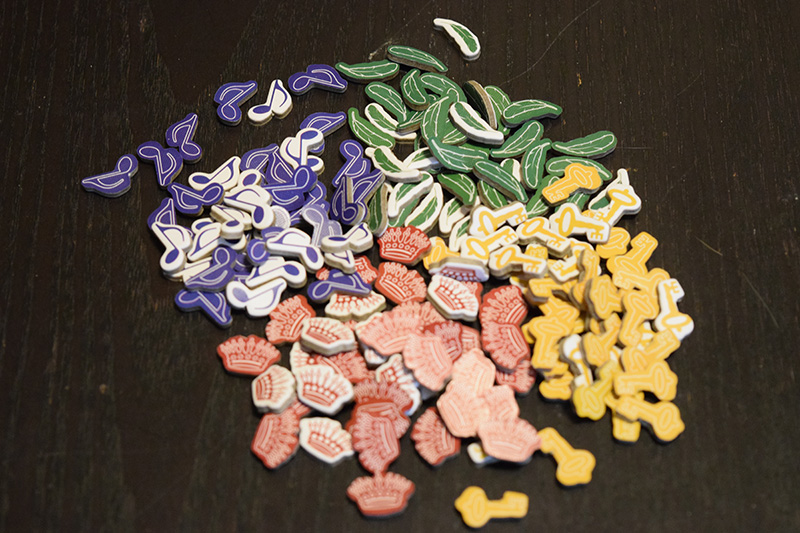 The Palace of Mad King Ludwig shares a lot of DNA with spiritual progenitors.  The influence from Castles of Mad King Ludwig is most obvious, but there’s also some Suburbia DNA spliced in there as well.  For longtime fans of Ted Alspach and his designs (which we are), there are elements, both in design and in presentation, that are incredibly familiar.  And like a chef on a reality cooking show who favors a particular ingredient or technique time and again, each new dish never quite gets to be its own thing – it is inevitably compared to previous, similar efforts, even though they are unarguably distinct from one another.

And it’s here where The Palace of Mad King Ludwig falls short.  Simply put, where The Palace of Mad King Ludwig’s design was most similar to other Bézier Games, it didn’t succeed as well.  The room tiles lacked the visual and spacial variety of Castles of Mad King Ludwig so some of the puzzle element was lost.  There wasn’t the same sense of combo building that made Suburbia feel exciting (despite its draaaaaab presentation), nor was there the satisfaction of building something all your own which was the most satisfying part of both those titles (and Suburbia Inc. as well).

Ultimately, The Palace of Mad King Ludwig wasn’t for us.  However, for those who are looking for a really great alternative to it which features lots of the same core mechanisms but with a lot more interesting choices to be made (and likely several metric tons less of swan droppings), we highly recommend checking out Castles of Mad King Ludwig.