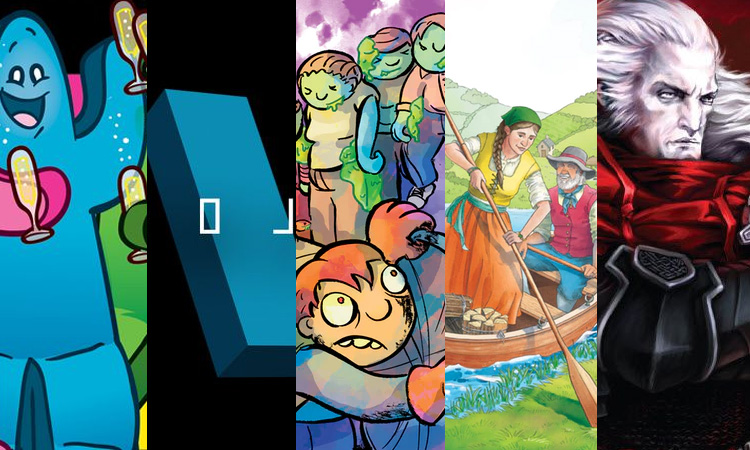 So I heard it’s Friday. You know what that means! Kickstarter projects! 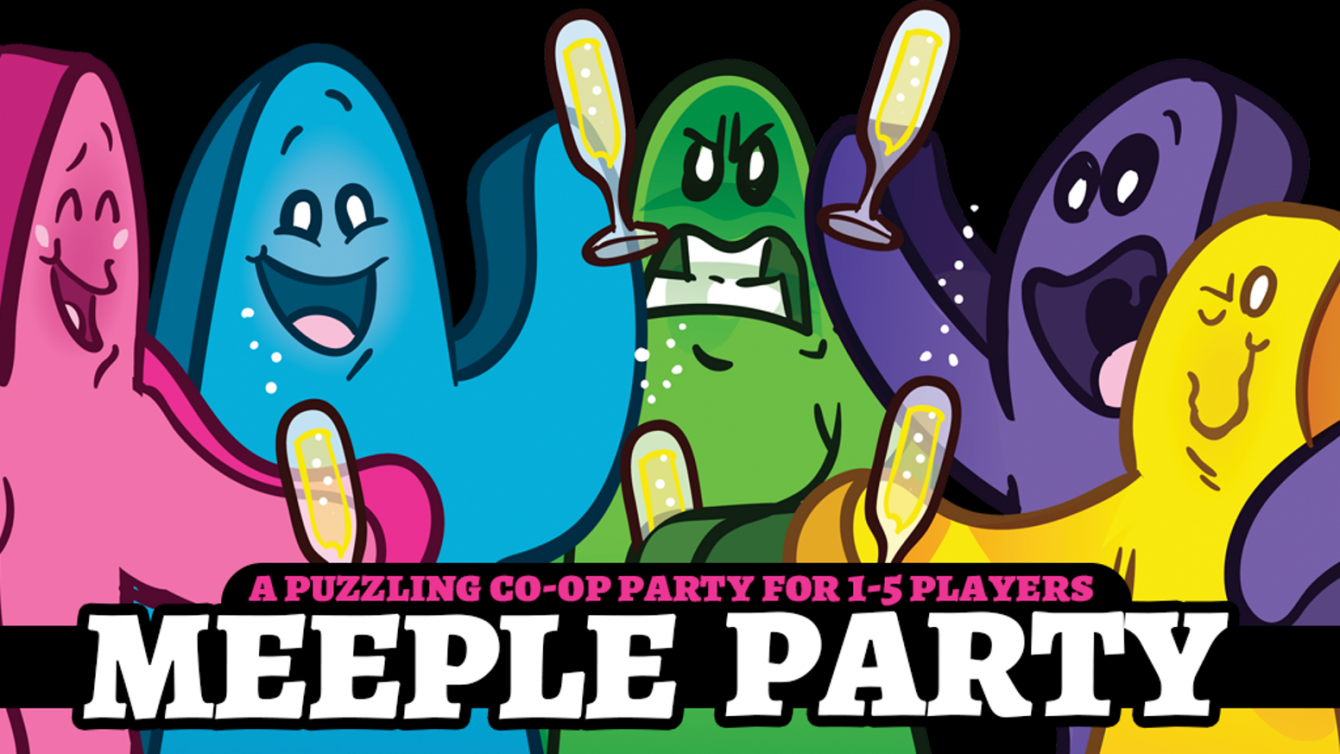 Do you crave the anxiety inducing task that is planning a party. Why yes I am an introvert. How did you know? Anyhoot, if raucous events are your thing then you should check out Meeple Party. 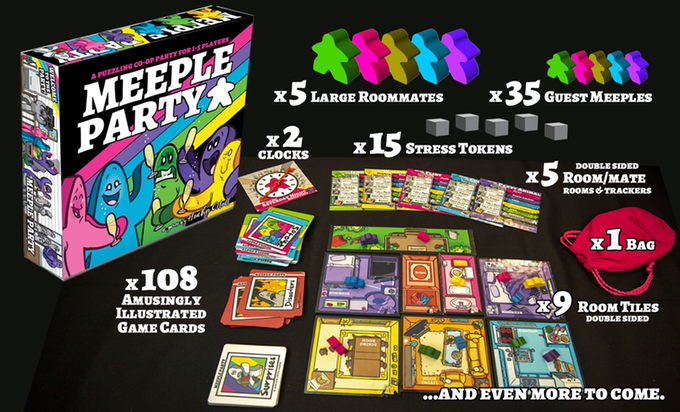 The gist of the game is that everyone is playing roommates who have decided to throw a party. You all have different objectives for this fiesta. Maybe you want to catch a photo of some wallflowers hanging out in the livingroom or perhaps snap a selfie with your best bud in the kitchen. Whatever your goals you’ll need to move partygoers around the house to fulfill your tasks. As you play, your characters will receive stress based on where meeples are in the house or events. You need to make sure that everyone stays calm and collected throughout the party to win because if everyone hits max stress the party is considered a failure and you must live with the shame for the rest of your life or at lest the next five minutes. Get invited to the Meeple Party on Kickstarter here! 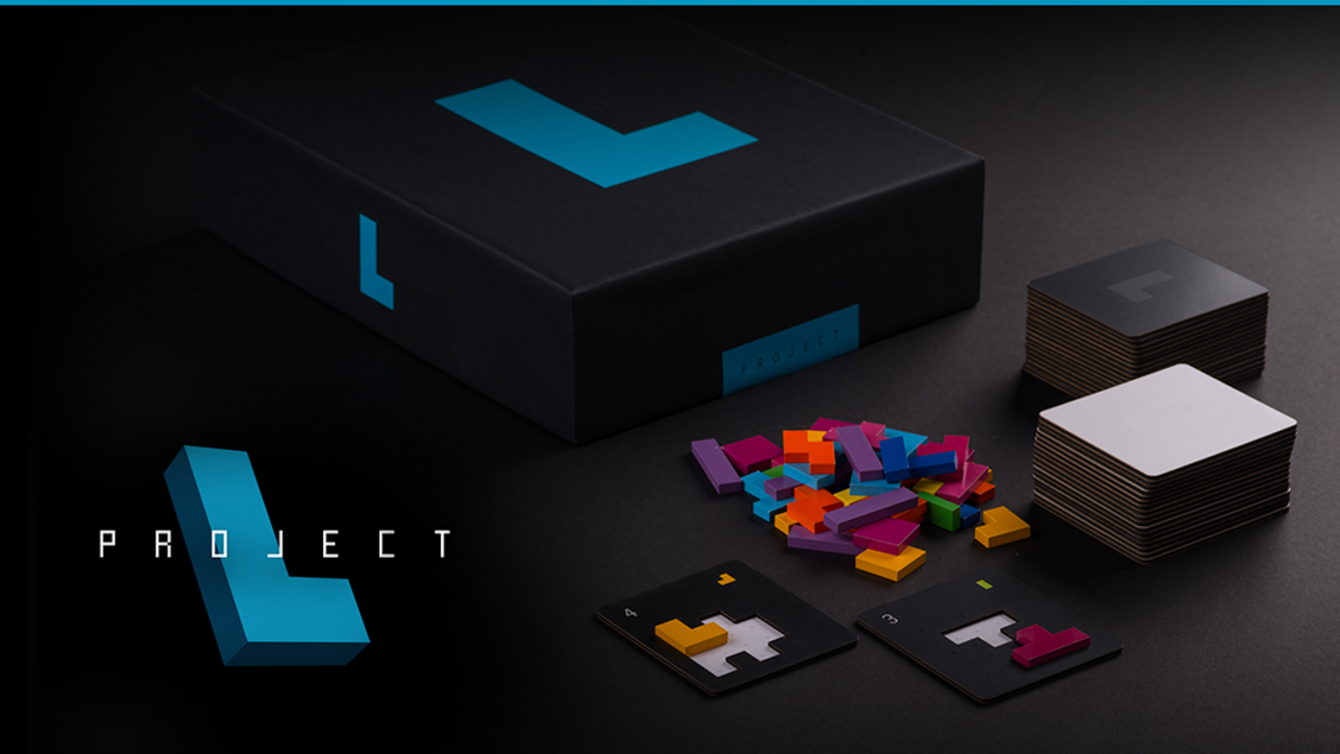 Project L is a simple abstract game that looks to be fairly challenging to win. You begin the game with 1 acrylic shape piece and must fill a tile with it. If you do then you get the piece you used back as well as a new piece as indicated on the card. keep collecting pieces until you can solve the hardest tiles. I remember doing challenges like this in kindergarten, but I suspect if you get a group of gown adults trying to do this at speed you’ll have frantic scramble between players as they fuss over trying to fill their tiles.

I like dexterity puzzle games (although I have to admit I’m not very good at them) and Project L has a nice sleek design that appeals to the visual artist in me. Check out Project L on Kickstarter here.

The people behind Scuttle! and Ninjitsu! are back to finish off the classic trio of ninjas, pirates, and of course Zombies! In the game you are looking to collect zombies.

Brains! has similar rules to the other games meaning that every turn you’ll draw two and decide to either add them to your collection, discard them for their actions. Where Brains! differs is that now players have a graveyard where they can bury the top card of the deck. Buried cards can do a bunch of different things like activating powers or triggering effects and even crawl out of the grave to be used again.  Brains! is a stanalone game, but you can mix it with Scuttle! and Ninjitsu! to have even more fun. Take a bite out of Brains! on Kickstarter here! 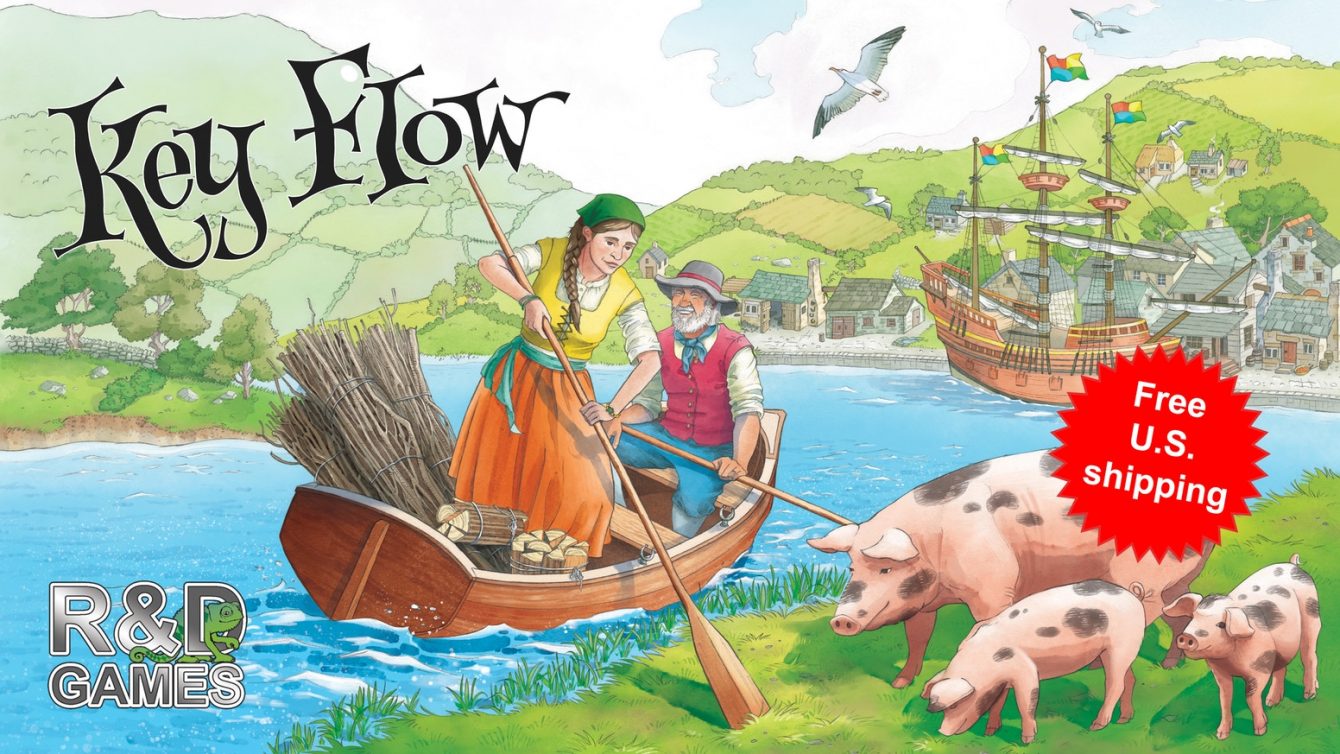 As you might know from our previous coverage of the Keyflower games, this series holds a special place in our heart as it was the first game we ever played with Josh. The games focus on managing your medieval village in the picturesque countryside. R & D Games’ new title,  Key Flow, is a card drafting/set collection game that follows in the same theme. 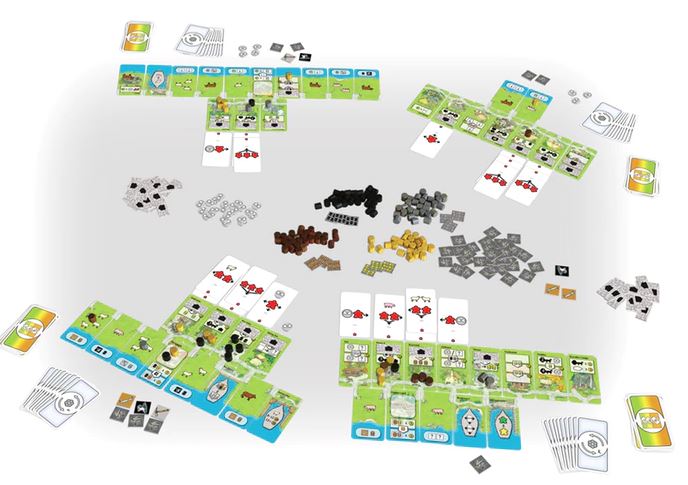 During the game you’ll have 4 seasons with which to develop your town. You’ll draft cards into your village adding things like buildings, animals, resources, and people (AKA ‘Keyple’), and at the end of the fourth round (winter) your village is scored. The series has been solid as a whole and I love village building games so I’m seriously considering backing Key Flow. If your interest is piqued then check out Key Flow on Kickstarter here. 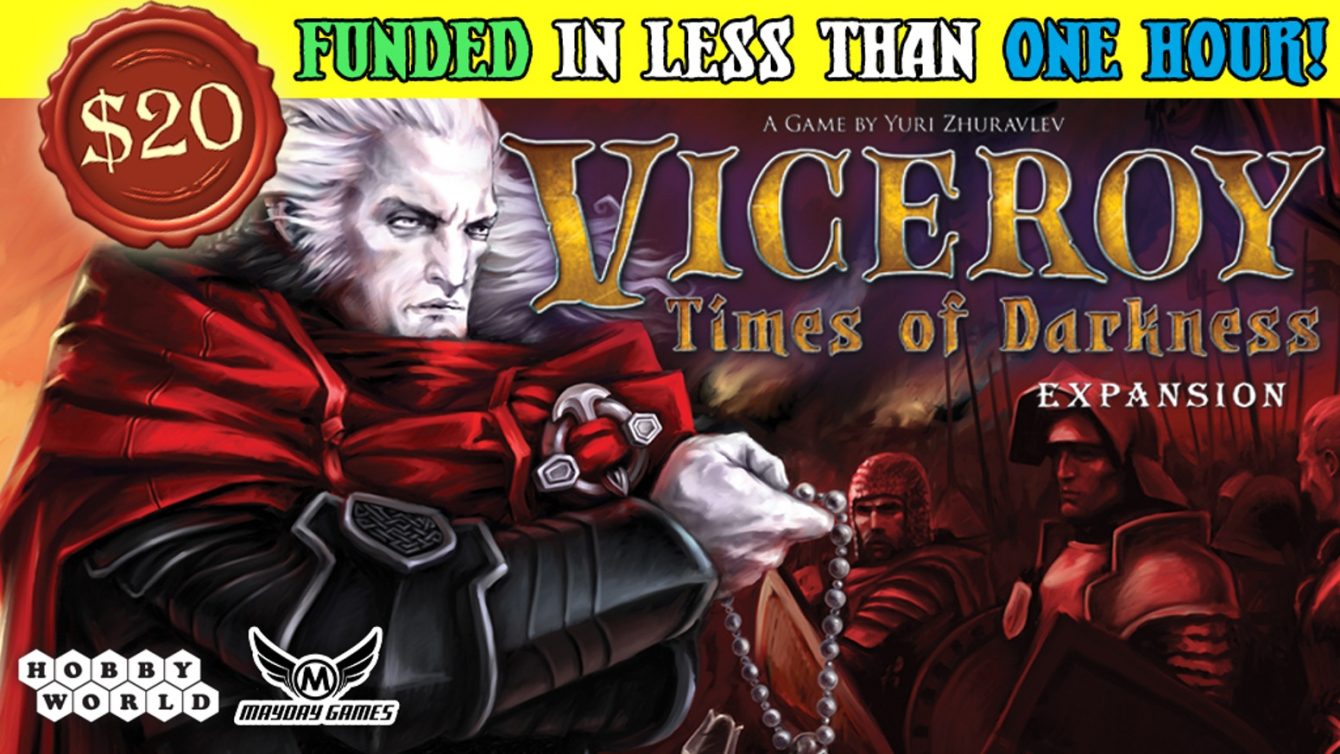 Way back in 2015, we reviewed Viceroy – a gorgeous set collection and auction game from Mayday.  We really enjoyed it, appreciating its tight auctions, clever combo-building, and adoring its aesthetic.  We played it plenty, had a good time, and lamented that there wasn’t a little more to add some spice to the game.

Well, good news! Viceroy: Times of Darkness brings three separate modules to breathe new life into this solid little game.  Will your pyramid of power feature fussy aristocrats?  Endure a monstrous invasion?  Or will you deal with the denizens of the underworld?  I want all three! 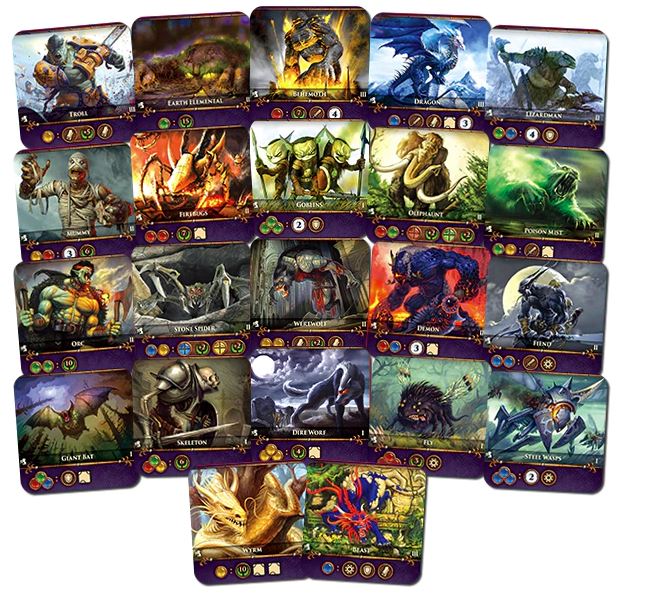 Best of all, Viceroy: Times of Darkness has revised rules to improve the solo and 2-player experience, and even fixes some of the Law cards that we (and everybody) thought were a little broken from the base game.  We loved the original, and we think that this expansion will be the thing that guarantees it’s triumphant return to our table! Check out Viceroy: Times of Darkness here on Kickstarter.

Have a Kickstarter you’re super excited about? Let us know in the comments below and we’ll check it out and make sure to visit us next Friday for more Kickstarter fun!