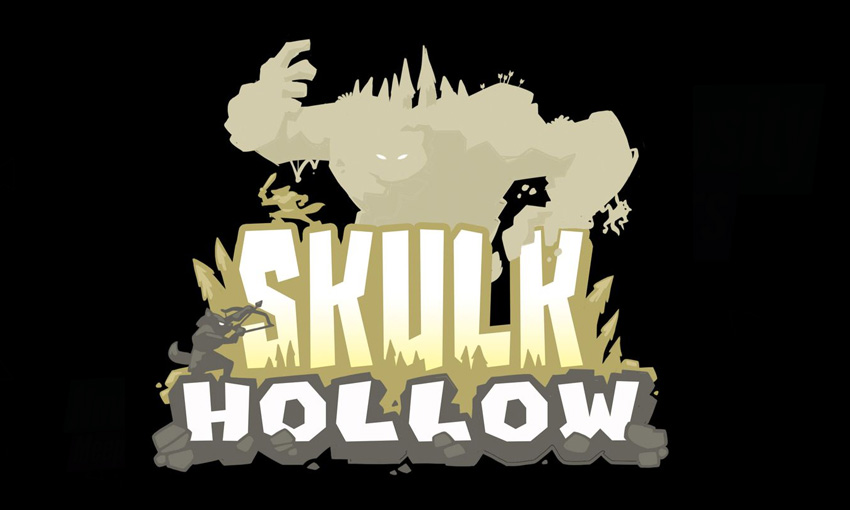 Skulk Hollow delivers an effective, engaging asymmetrical 2 player experience that mimics those exciting action sequences where a giant monster is attacking and an army of smaller defenders swarm to defeat it - from both perspectives.

So the thing I love about Skulk Hollow is-

Jess:  Wait, already?  You’re not even introducing the game first?

Andrew:  I just really like it!  But you’re right, let’s not skip to the end – here’s an overview of Skulk Hollow. 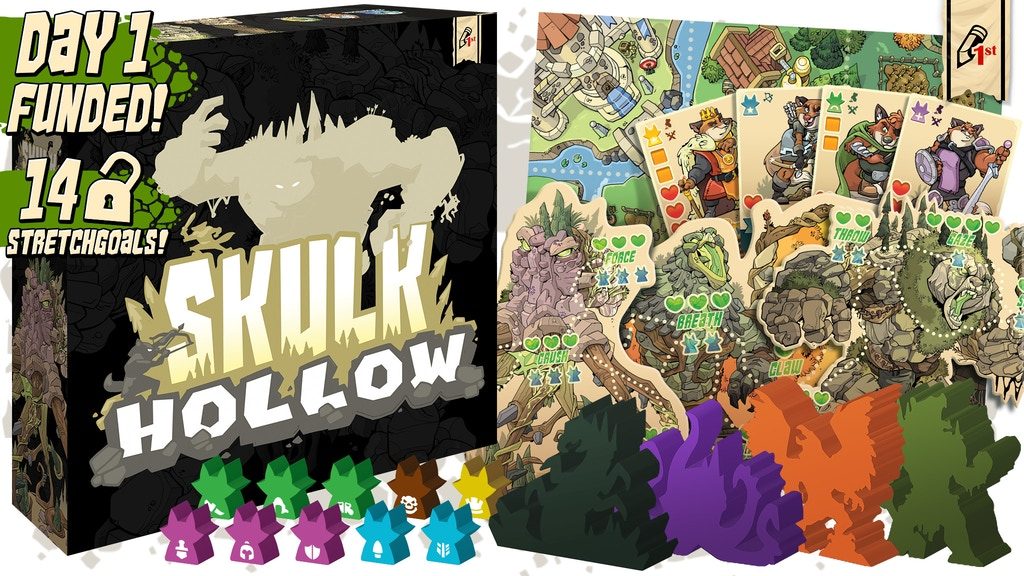 Kickstarter Preview Alert – Gameosity as provided a preview copy of Skulk Hollow, with the option of requesting a retail version later.  We were not otherwise compensated for this preview.  Images are either of prototype components or from the Skulk Hollow Kickstarter page.

Skulk Hollow is a asymmetrical game for 2 players, and by that we mean that each player will engage the game with a different set of mechanics and victory conditions.  On one side of the battle are the Foxen Heroes – bold defenders of the kingdom of Skulk Hollow.  On the other, the ferocious Guardian spirits – towering monstrosities of stone, root, and fury.  Each player will take on the role of one side of this pitched battle for the future of the Hollow!

Each side has a series of unique mechanics and setup options.  First and foremost, the Guardian player must decide which of the titanic nature spirits they will play that game.  Each one has unique mechanisms, victory conditions, and powers.  The Foxen Hero player will likewise have to decide which leader they will bring into battle to lead their armies. 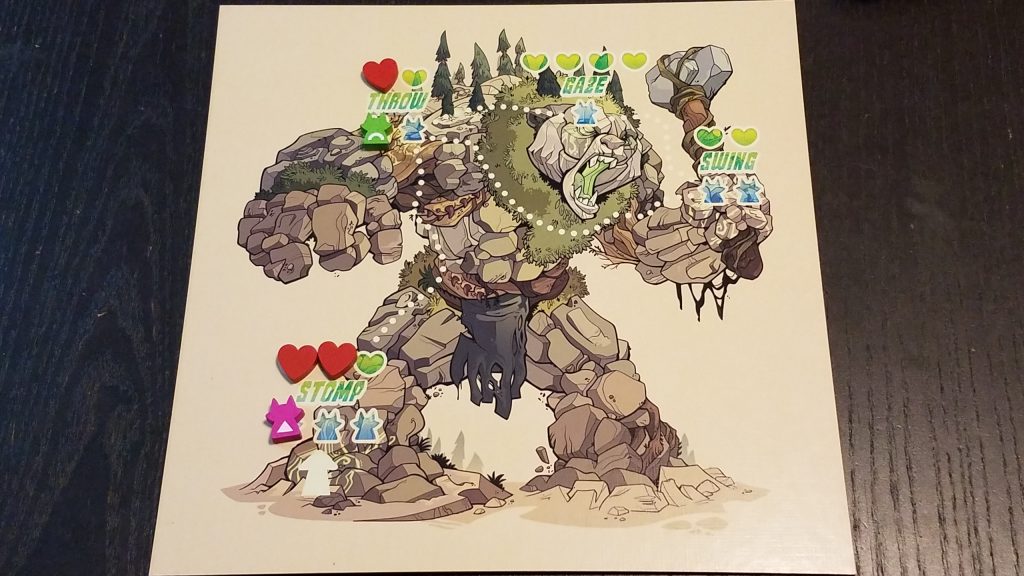 The Foxen hero wins if they manage to fell the great Guardian.  This won’t be such an easy feat – the Guardian is huge, and the Foxen will need to bravely scale the massive beast in order to stand a chance of bringing it down.  The Foxen player’s unique deck hosts its army – the Foxen’s strength is in their diversity and numbers, with agile rogues, far-striking archers, and fearless knights.

From the other side of the board lumbers the Guardian.  Each Guardian has its own deck of action cards and rules of engagement, like the deadly Raptra which soars high above the battlefield, the mighty Grak who strikes with the force of an earthquake, or the terrifying Tanthos, whose spreading tentacles reach far across the terrain.  Each of these great beasts has its own victory condition and method for dealing with those pesky Foxen who insistently swarm from their castle to battle for their lives.

Jess:  Now, there are lots of 2-player battle games – what was it about Skulk Hollow that you liked so much?

Andrew:  Well, a few things, actually.  First, I love how differently each side feels.  When you’re playing a Guardian, you’re this massive siege engine who feels (at first) kinda invincible.  But the Foxen are numerous and quick, and there’s this ‘oh crap’ moment that the Guardian often feels as a few Foxen leap on and start taking out the Guardian’s powers.

Jess:  I get that.  The flip-side of that experience is how the Foxen are so fragile, dying in just a hit or two.  But once you get some diversity of unit on the board, not to mention on the Guardian, all of a sudden the impossible task of killing the massive thing starts to look more and more possible.

Andrew:  For sure.  But for me, the way that Skulk Hollow really succeeds is the kind of asymmetrical battle it works to capture.  Innumerable movies and video games have featured pitched struggles against insurmountably huge foes, with heroes scrambling up the superstructure of an impossibly large enemy, desperately hanging on for dear life as the behemoth seeks to toss them off and crush them.  Skulk Hollow really goes for that feeling without getting bogged down in lots of unnecessary mechanics. 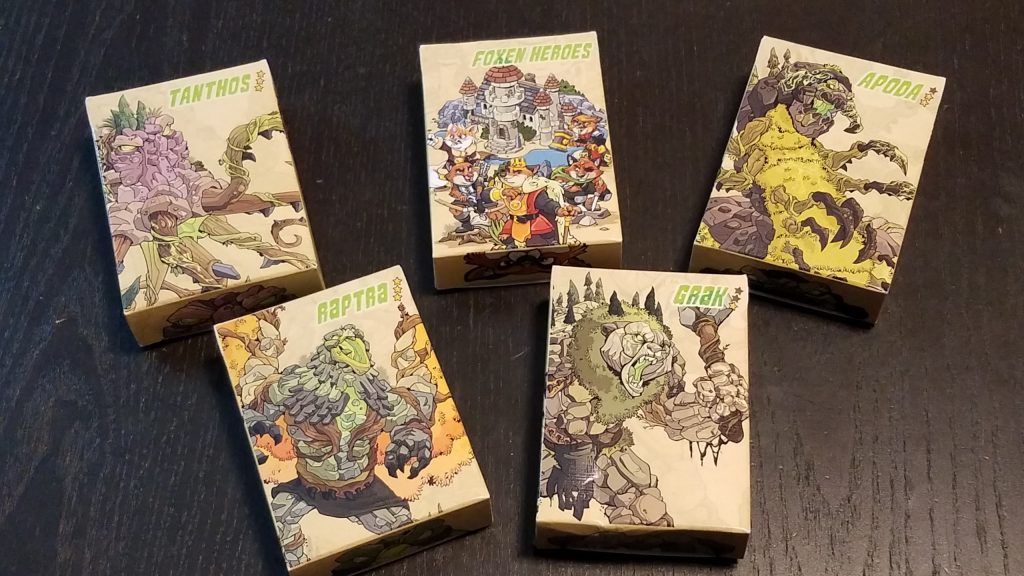 Skulk Hollow is currently on Kickstarter and is hugely funded.  Surpassed stretch goals have added an extra Guardian, upgraded tokens, improved components, and a custom insert (among other things), and future goals will add wooden tokens to replace some of the cardboard bits. 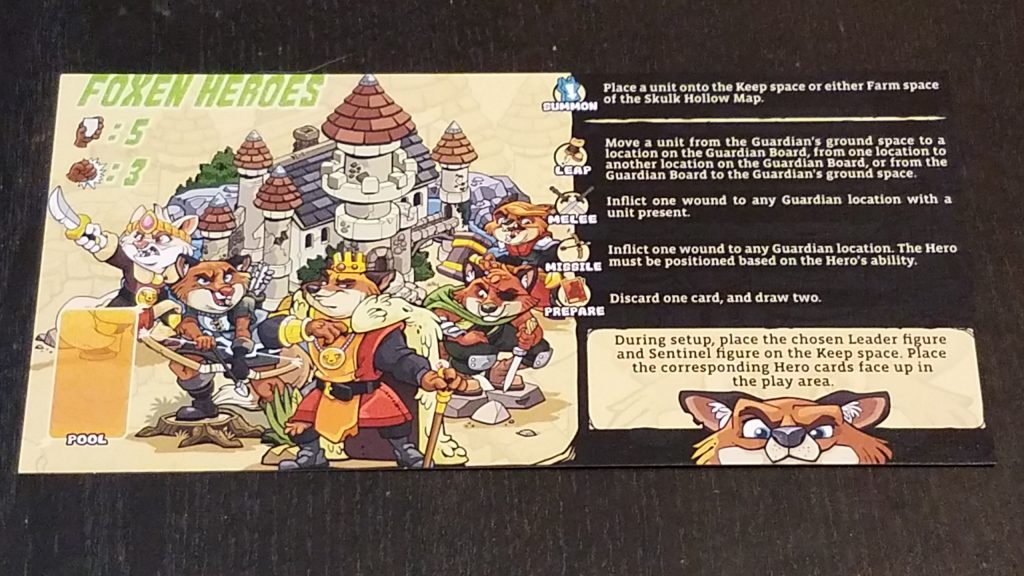 In case it wasn’t already clear, we definitely recommend checking out the Skulk Hollow Kickstarter – as a dedicated game for two, it creates a really fun, quick, engaging combat scenario that’s unique enough that it immediately grabbed our attention

Make like those Foxen heroes and leap on over to the Skulk Hollow Kickstarter page now!