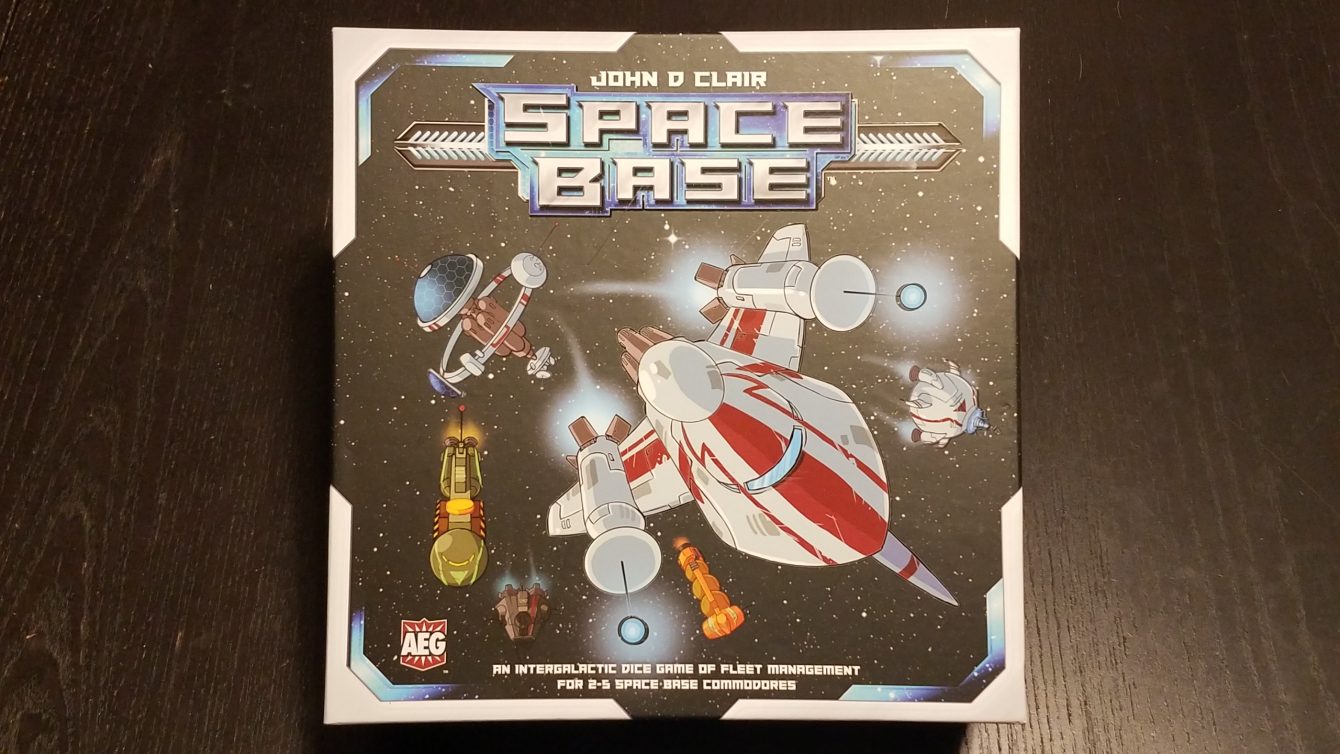 Space Base is a fantastic example of dice-driven engine building done right.  It's a generous game that gets you invested in every player's roll of the dice, and features more strategic decision-making than many mechanically-similar games.

In Space Base from Alderac Entertainment Group, you and your fellow Commodores will toss the dice, launch your fleet, collect credits and stack influence to the stars as you work to prove yourselves worthy of rising through the naval ranks!  With an armada of ships at your disposal, smart deployment strategy, and a whole lot of luck, maybe you’ll be the one to get promoted to Admiral of the Fleet!

Andrew:  Yeah, me either.  I just think of it as ‘roll dice, get stuff, earn points’.

Jess:  Good enough for me!

First and foremost, Space Base is a game that’s dedicated to keeping all players engaged at all times.  It’s one of those games that Josh has described as ‘generous’ – the sort of game that doesn’t really make you wait for your turn before it showers you with resources, currency, and points, keeping you invested in every single toss of the dice.  And while Space Base is certainly an engine-building game at heart, it’s assuredly the dice which are driving that engine.

Space Base is an unbelievably easy game to teach and learn.  Each player’s turn is comprised of three simple steps – roll and allocate your dice, collect income, and (maybe) make a purchase.  From a mechanical standpoint, it doesn’t get much easier. 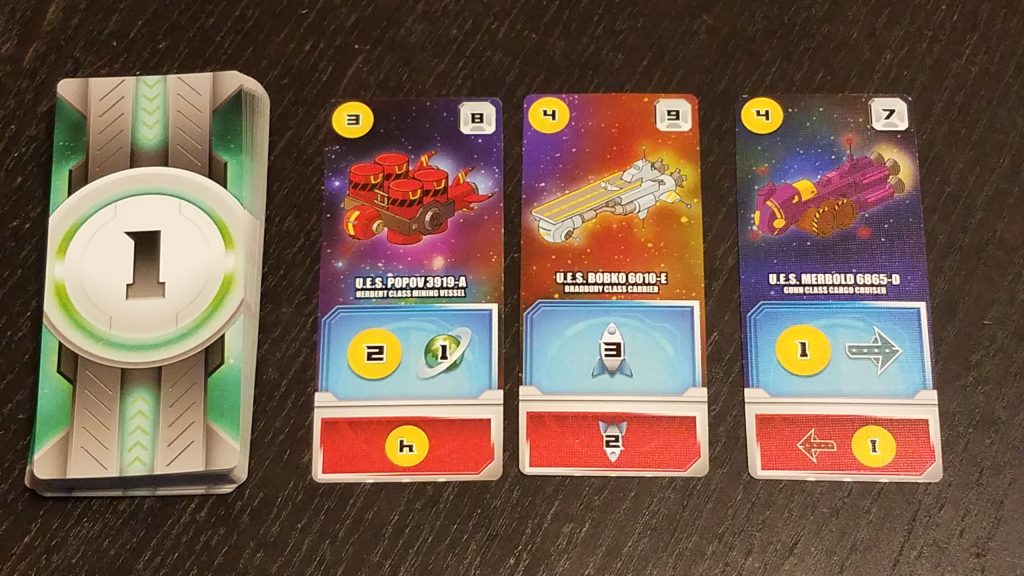 When you roll the dice, you will decide whether to allocate them separately or as the sum total of their values.  Dice allocated will activate corresponding ships in your fleet, producing whatever rewards they indicate – either currency for buying new ships, income that increases how many credits you get each turn, or influence, the victory points of the game.  However, what makes Space Base work oh so well is that everyone will use the dice the active player rolled, either allocating them together or separately. 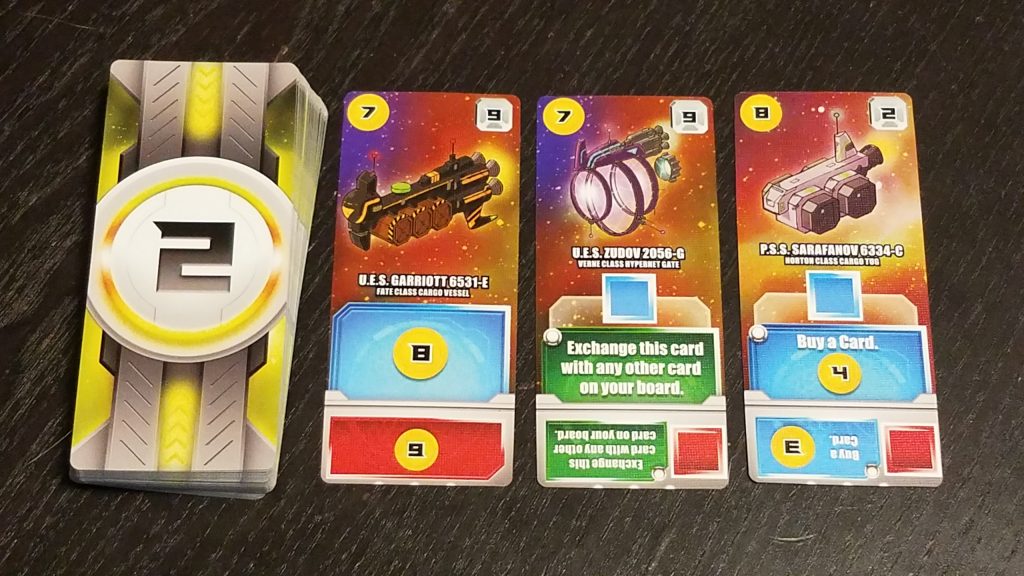 Andrew:  That’s awesome, because everyone is invested in every single dice roll!  There’s barely any downtime in Space Base because you’re always engaged with the dice.

Jess:  Not only that, but the fact is that while Space Base is very luck-based, you don’t have to just count on lucky rolls that you make – it’s everyone’s luck, not just your own! 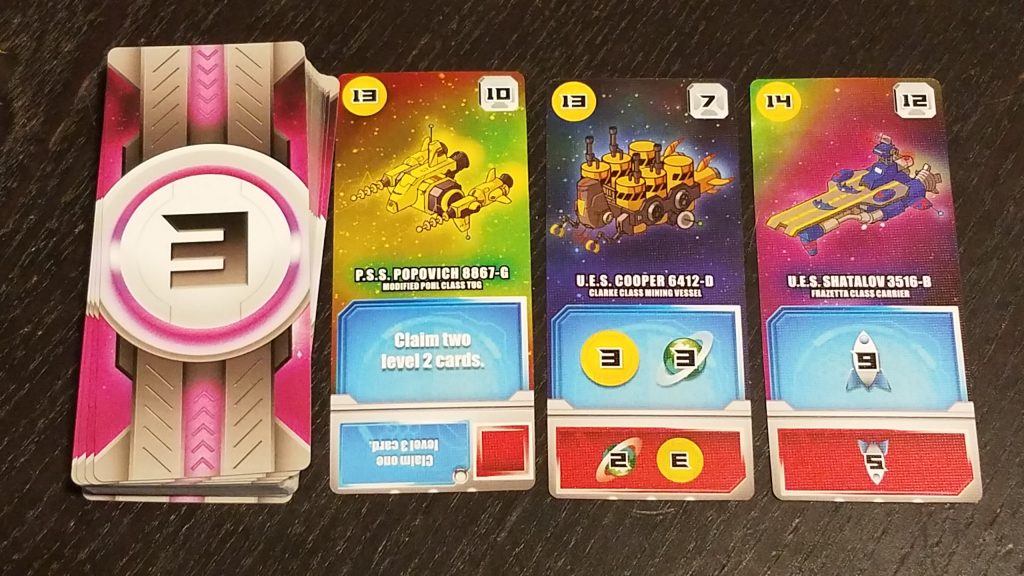 That said, here’s where the strategic elements of Space Base come to the surface.  The 12 ships in your fleet produce their Blue rewards when you activate them on your turn.  However, as soon as you use your amassed credits to buy a new ship, it replaces one currently in your base – the deployed ship then gets flipped over and stacked above its former bay, exposing (usually) a Red reward, which only activates on opponents’ turns. 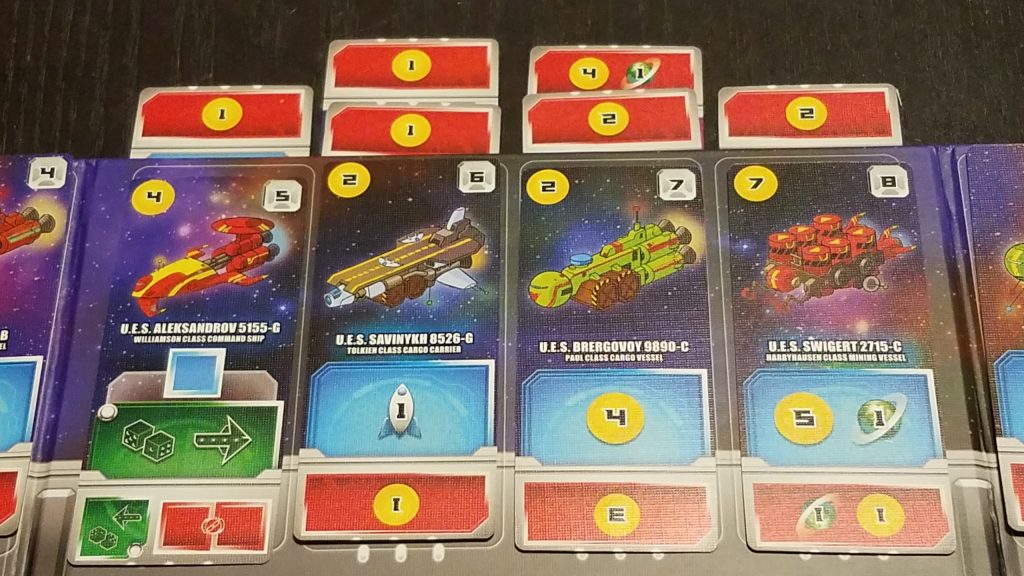 Josh:  Immediately, you know you want a big spread of ships.  That way, no matter what sort of roll comes up, you’re going to get something.

Andrew:  Not necessarily!  Since some numbers are more likely to come up than others, it’s entirely possible to stack them with valuable deployed-ship effects, and bank on big plays when your opponents roll them.

Jess:  Both strategies work!  It all comes down to building the best engine you can and how the dice fall.

Space Base is a game of ramping potential.  At the onset, each roll of the dice is only of limited utility – each player starts with one random deployed ship, and so it might take several turns to build up any sort of regular off-turn income.  However, once you start adding parts to your engine, the swings ramp up nicely, bringing the huge tier 3 ships into range just as the game is starting to get tight.  Space Base often ends abruptly, with a player hitting the requisite 40 victory points possibly even off-turn. 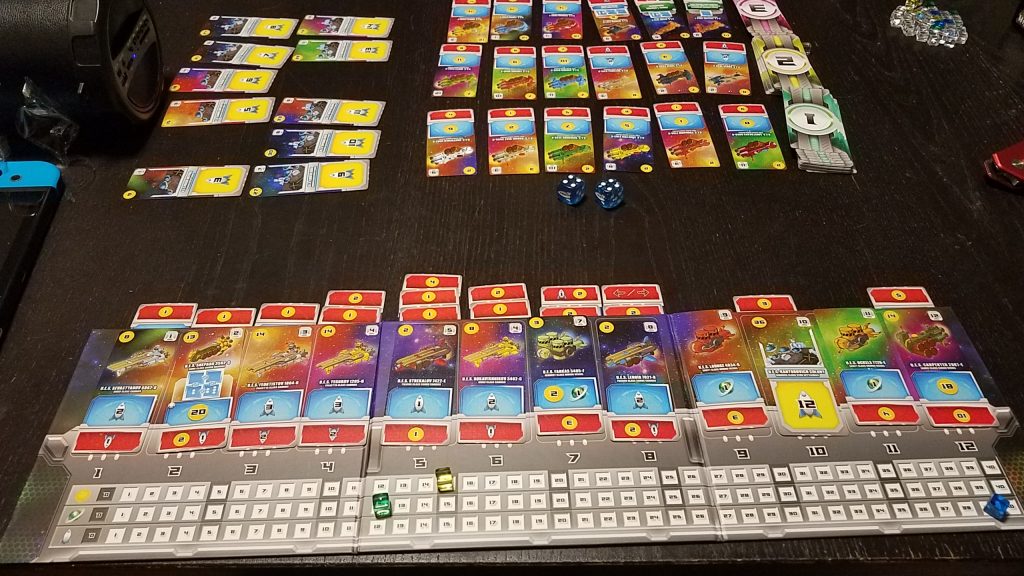 Josh:  Love everything about it.  Great game.

Jess:  I liked it a whole lot, too!  My only real nit-pick is that I think the slender cards might be a little bit of a pain to shuffle, but other than that, no issues here.

Andrew:  See, the slim cards are one of the things I loved about Space Base.  The gameplay is crisp and engaging and I really liked the presentation, from the player boards to the weirdly extensive list of unique ship names.

Josh:  My only complaint is that it was sometimes easy to accidentally nudge your tracker cubes and lose their exact place on your player board.

Jess:  That and the fact that it was sometimes a little fussy having to slide those cards under each other.

Andrew:  You two are ridiculous.

Those incredibly minor criticisms aside, we all had a tremendously good time with Space Base.  It’s a natural fit for the lighter, faster gameplay that many game nights are composed of, and it works very well regardless of player count.  If you have an appetite for some randomness but still appreciate a dash of strategic decision-making, you should definitely check out Space Base!

If rolling dice and gathering resources is your kinda thing, then we also highly recommend Valeria: Card Kingdoms from Daily Magic Games!