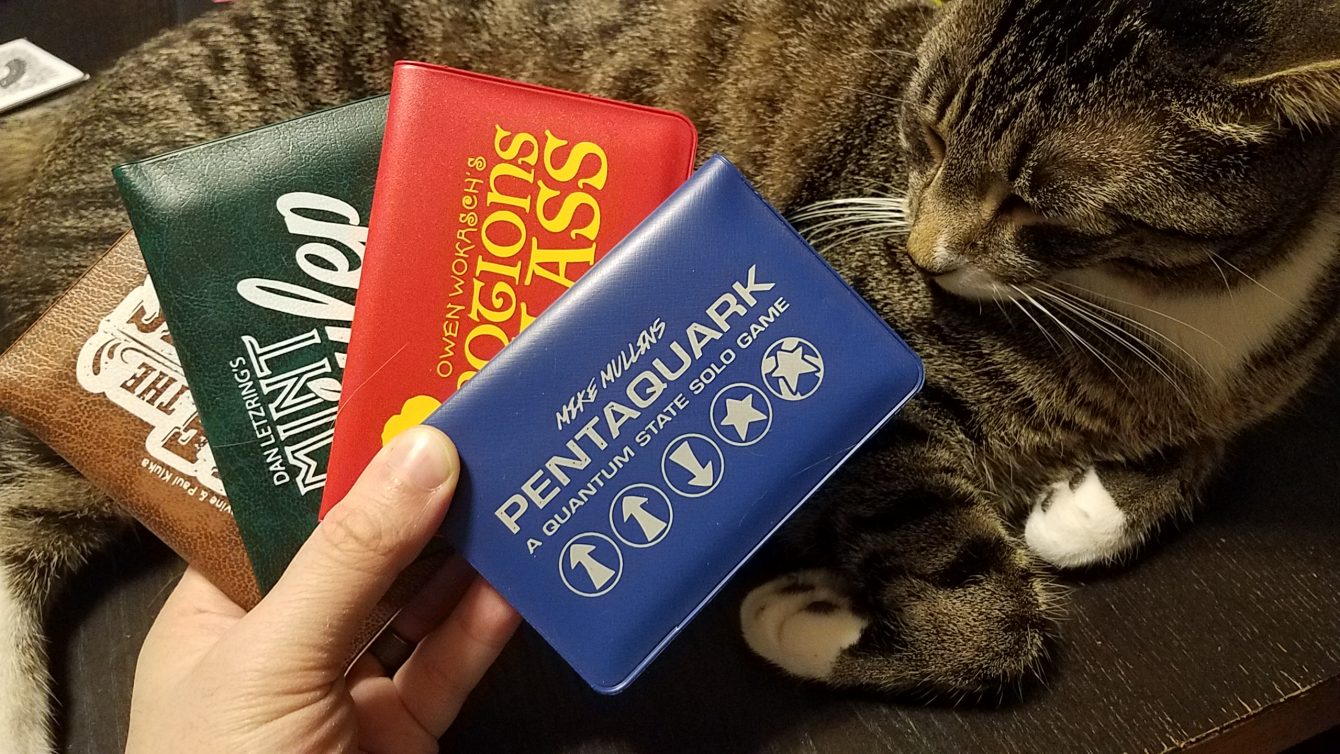 So, I was getting ready to review Mint Julep, a drafting/hand management micro game from the folks over at Button Shy Games.  And in wracking my brain to come up with some ingot of cleverness with which to start the review of this example of Button Shy’s unique Wallet Games, the following gem tumbled into my brain:

“While every game publisher is looking to separate us from the contents of our wallets, Jason Tagmire of Button Shy is at least trying to fill our wallets in return…with games!”

Ok look, I thought it was clever.

But my aptitude for linguistic brilliance aside, it did get me thinking about this small publishing house and their ongoing mission to publish games that bring big fun in their incredibly small packages.  So I thought it would be fun to talk a little bit about Button Shy Games, as well as provide a little review roundup for a few of their wallet games.

Gameosity has received a handful of wallet games from Button Shy Games over the years, mostly as Kickstarter Previews.  We’re subscribers to their Game of the Month service (which we’ll cover in a bit), by supporting their Patreon.  Just so you know.

The first thing you should know about Button Shy is that, as I mentioned, they publish what they call wallet games.  These card games generally clock in at around 18 cards (or less!) and are delivered in bi-fold plastic wallets, ideal for throwing in a bag or backpack or pocket for portable gaming at a moment’s notice.  This physical restriction on the size of the games Button Shy publishes has enabled them to be incredibly prolific – generally releasing about one new game a month, across lots of genres and styles.

As you can read on their website, Jason Tagmire’s operation isn’t any larger than the micro games he publishes – mostly a one-man operation with the support of some friends and family.  They do a lot with a little, generating buzz for their games via the usual routes of convention appearances, social media, and a slew of successful Kickstarter campaigns.

What we appreciate about Button Shy Games is their approach – it’s very easy for games to become a mess of ritzy components and overblown designs (and make no mistake, we love ritzy components and overblown designs), but the wallet games Button Shy puts forth tend to be small, focused, and (critically) fun.  And with the breath of the categories they cross, you’re bound to find something worth putting in your pocket – and it won’t even empty your own wallet to do so.

While we haven’t loved every Button Shy Game we’ve come across, the beauty of their approach is that the winners feel like tremendous value for the investment of cash and space, and there’s no sting to it when we’ve run across one that didn’t land well for us.

But enough broad generalities – let’s look at some games! 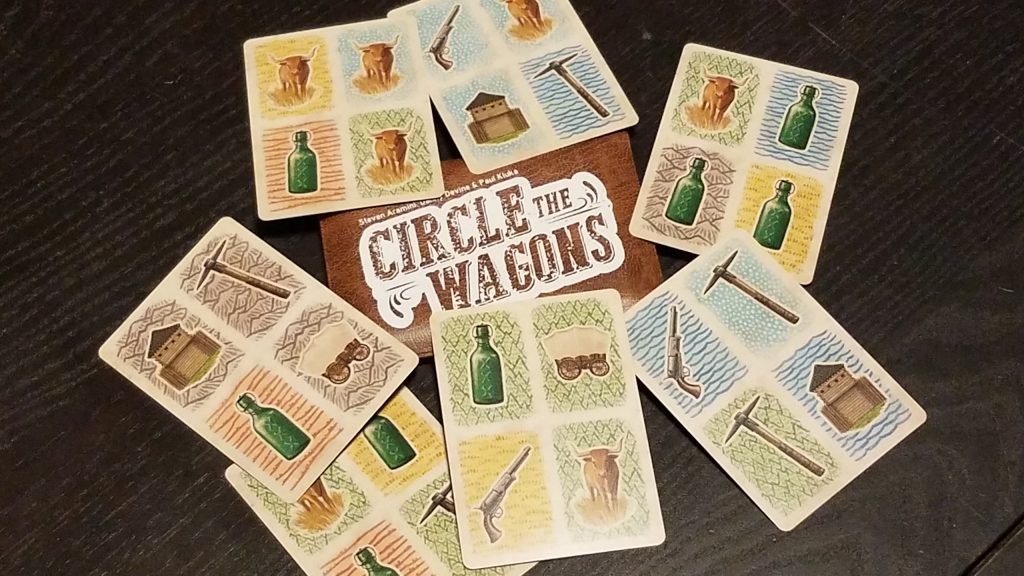 For a long time (before we previewed Sprawlopolis), I considered Circle the Wagons to be the best Button Shy game I’d played.  We did a Kickstarter preview for this tableau/pattern building game and have enjoyed it ever since.  Circle the Wagons is a tableau/pattern building game for two, with some really slick drafting choices to be made – you can always grab the card you want, but you’ll give your opponent any cards you skipped over. 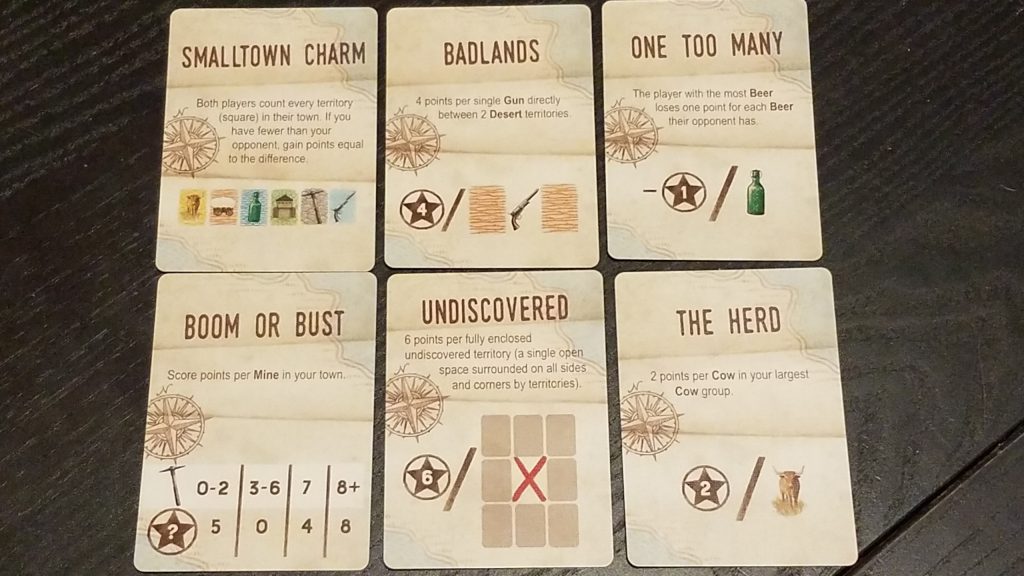 The choice between grabbing exactly what you need to meet scoring goals is balanced against the danger of giving your opponent a windfall of cards for free.  With just the right level of strategy to make it interesting while keeping things snappy and quick, we still love Circle the Wagons. 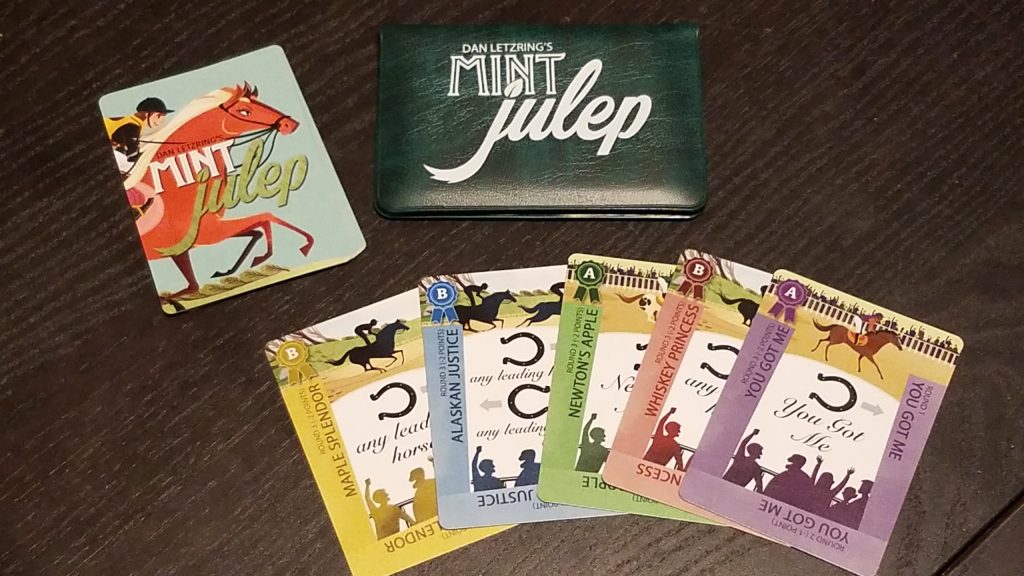 The review that got this article started is for a hand management/drafting hybrid.  Players will be betting on the horses in a race, playing cards to move the racers forward or back over the course of three rounds.  However, each round begins with a card draft that will determine what you can do with your turns, and smart players know when it’s time to bail on an early bet to favor a safer (though less valuable) late-game bet. 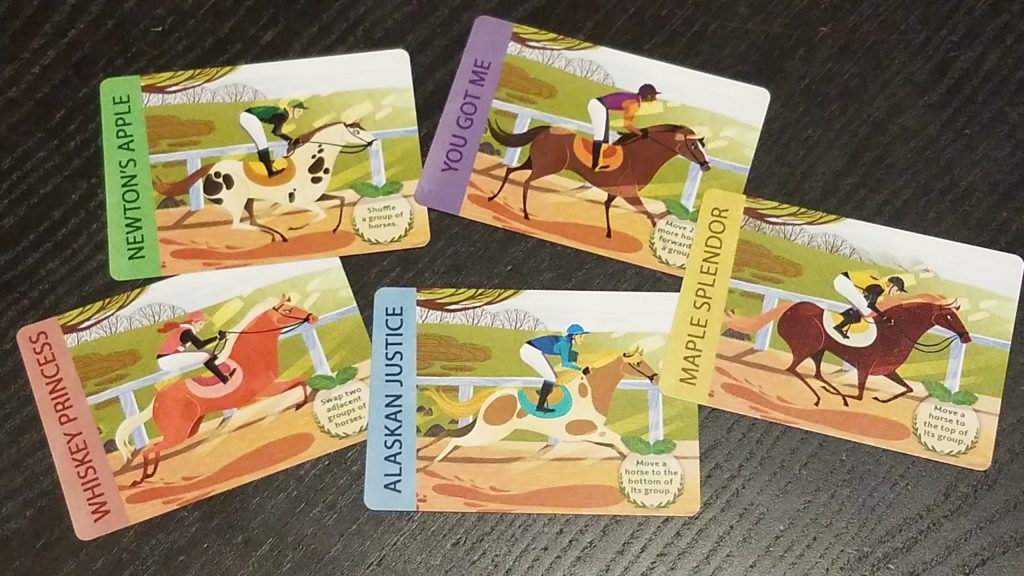 Though we didn’t care for it as much at 2 players (the rules strain a bit to accommodate that player count) we liked Mint Julep at 3 or 4 just fine, and really like the art as well. 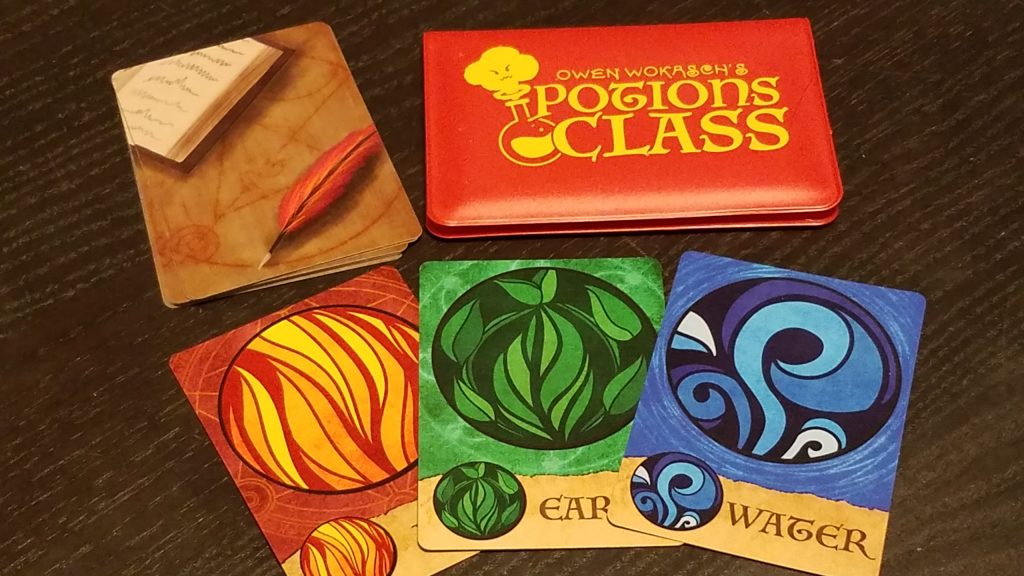 It’s a limited release, so grabbing a copy might not be the easiest, but this ultra-light hand management game for 2 features really great aesthetics and fun gameplay.  Each student alchemist is trying to successfully craft three potions by drafting ingredients.  There are three places where ingredients can go – your private reserve, your opponent’s private reserve, and the potions the players are collectively trying to brew. 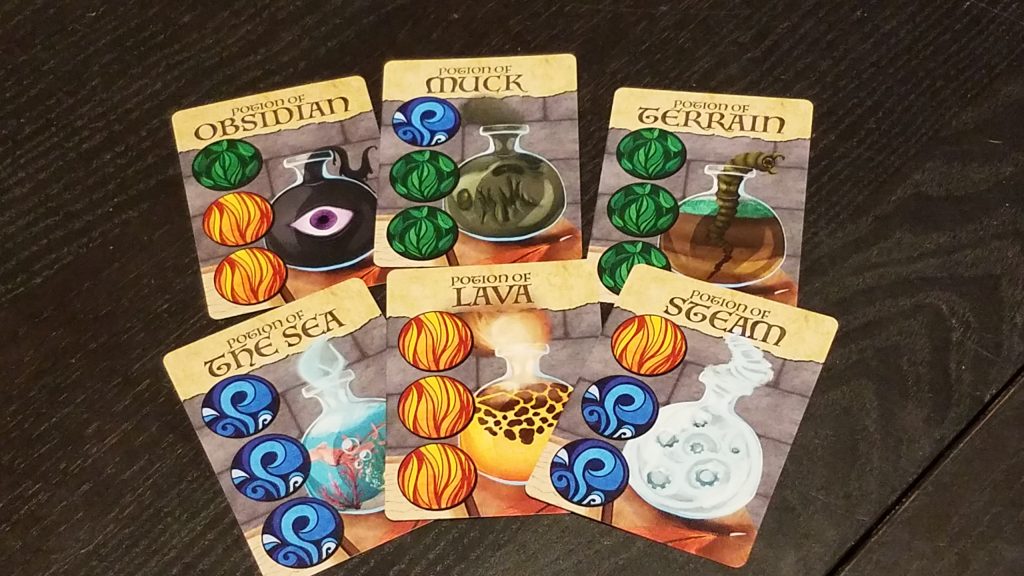 But the kicker, and what makes Potion Class such a fun little diversion, is that each turn you must place an ingredient in each of these places – and you have to pick where you’re sending an ingredient before you draw your next one.  And add too many ingredients to any one place and you’ll find yourself triggering an ingredient-wiping explosion, which becomes a key strategy.  We love that sort of decision-making (one of our absolute favorite games, Herbaceous, is built on it), and Potion Class delivers it in a brilliant little dosage for two. 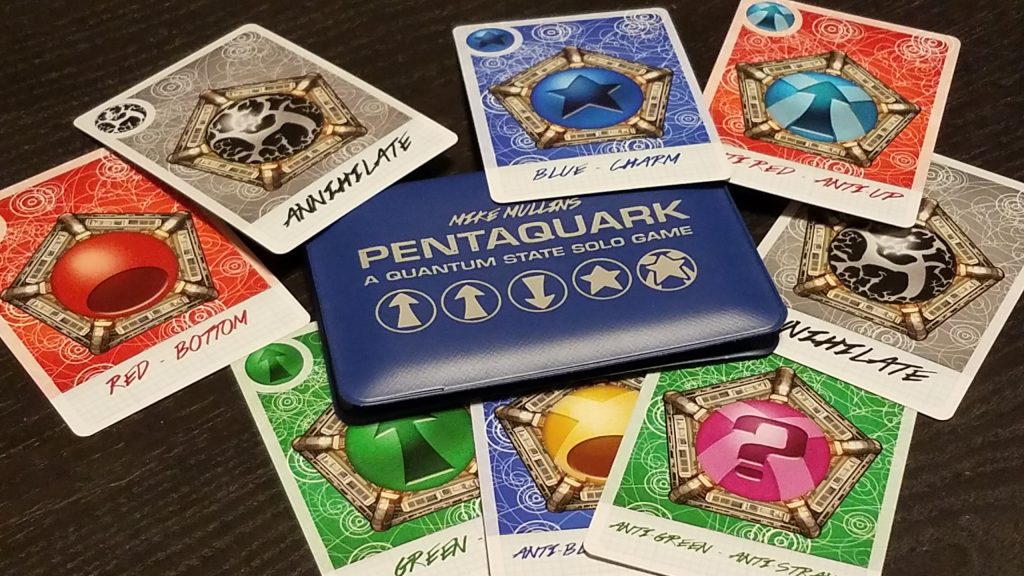 Ok, so I’m still trying to get good at Pentaquark.  By which I mean I still haven’t actually won a game of it.  But this solitaire set collection game has you trying to isolate specific strings of particles from an accelerator, drafting and allocating cards over a series of rounds.  I’d love to give you a better summary of it, but honestly, it’ll probably be better if I let creator Mike Mullens do that for you.

Ahead in the Clouds 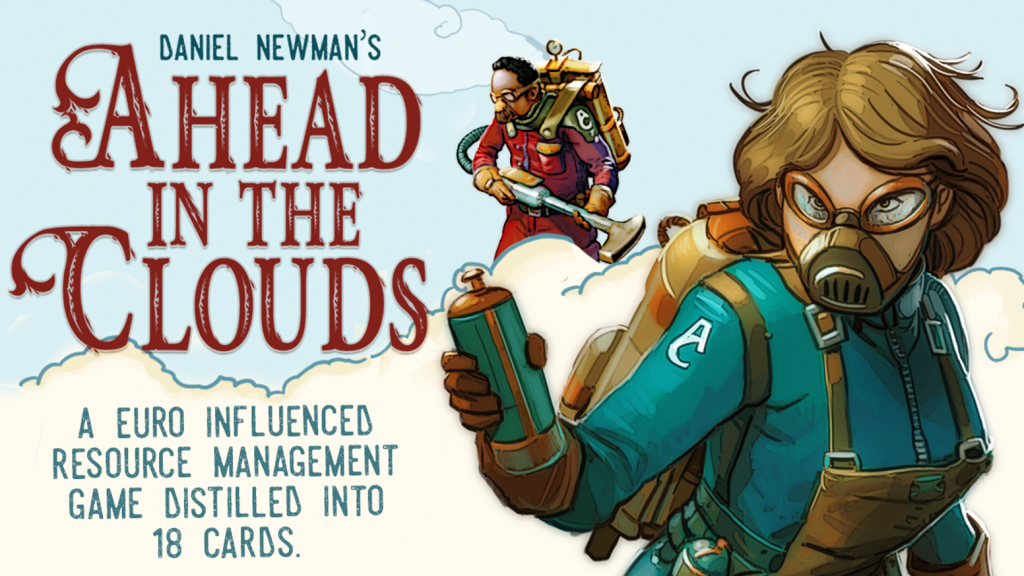 This resource management game was one of the first wallet games we ever previewed.  Designed by some guy whose name I can’t remember (ok, it’s Daniel Newman, who has since become a good friend of Team Gameosity), Ahead in the Clouds features a unique card-placement mechanic, where your efforts to fulfill contracts by managing goods is reliant on how you and your opponents have brought together the modular buildings and factories you share.  It’s a neat twist, delivering a Euro-y feel in just 18 cards and a short playtime. 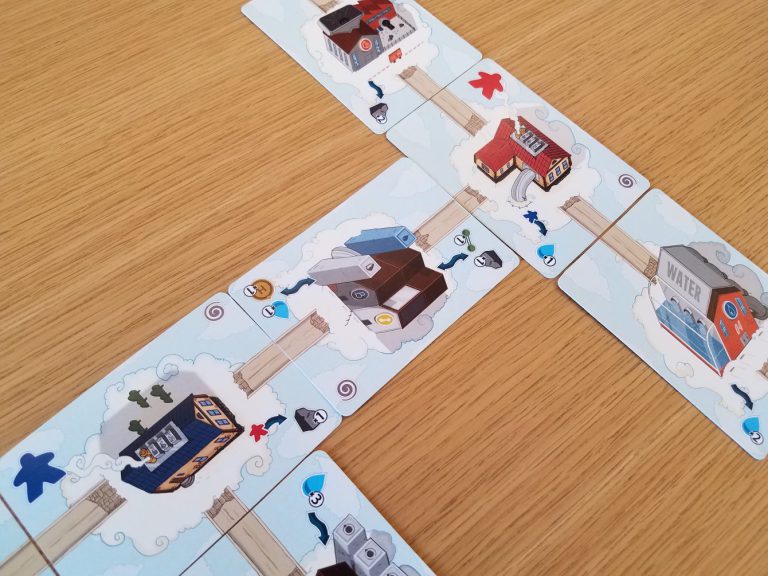 And if you like the feel of Ahead in the Clouds but wish for some diversity of gameplay, there are lots of little add-ons you can pick up on Button Shy’s site to add more flavor to this already sky-high design, even expanding it to 3 or 4 players!

So that’s just a little taste of what Button Shy Games has to offer – I could go on, honestly.  Their diversity is their strength, and the brevity of their designs cater to gamers who are looking for a diversion that they can always have at their disposal.

If that sounds like you, I do suggest heading on over to the Button Shy Games site and taking a look at their offerings.  You’ll probably find something you’ll like, and hey, it’s not like you’ll have to empty your wallet to find out.