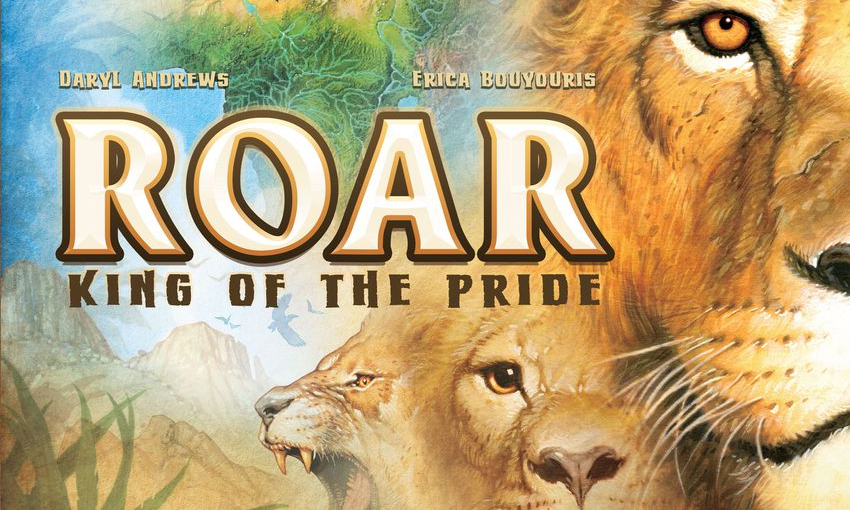 Roar: King of the Pride is an attractive area control game, with a theme and setting that doesn't get nearly enough attention in game design.  It really is survival of the fittest, though, because underneath the attractive Vincent Dutrait art lies a really mean game, all about snatching victory from the jaws of your opponents.

It’s no secret that Team Gameosity is strongly pro-kitty.  At this point we’ve entirely given up trying to keep Meeple out of our videos.  So as soon as we saw what Roar: King of the Pride was all about and that it gave us the chance to be some of the greatest of those great beasts, we couldn’t wait to check it out!

…Then things got a little, uh, nasty.

Jess:  My pride majestically spreads across the plains!  They are as noble as they are glorious!

Josh:  You’re encroaching on my territory, Jess.  And I’m afraid the only answer is for me to roar!!! to steal some of your lady lions!

Jess:  That can’t be allowed!  Prepare to face the fanged fury of my pack!

Andrew:  I drop some humans on you both.  No more lions for you. 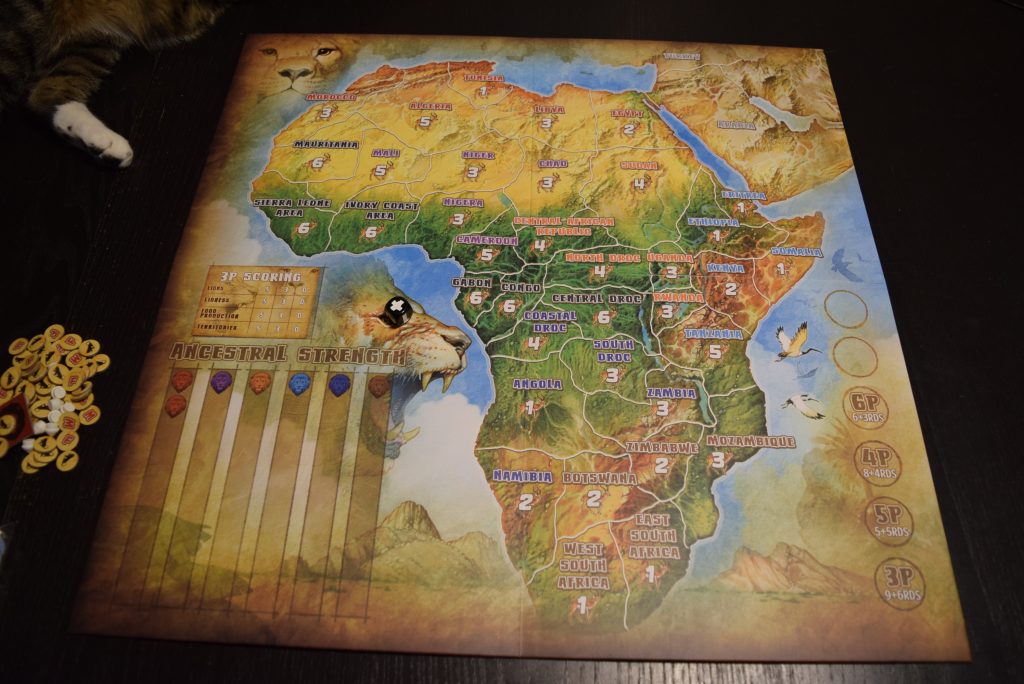 Gameosity received a review copy of Roar: King of the Pride.  We weren’t otherwise compensated.

But let’s back up a moment.  In Roar: King of the Pride, each player controls a different breed of lion, and the goal of the game is to out-score your opponents.  The majority of the scoring is done at the end of the game, and is focused on how large you’ve managed to grow your pride and how much territory they control.

As a player in Roar: King of the Pride, you will grow your pride by mating pairs of male and female lions, protecting the resulting cubs until they grow up, and making sure that all your lions have enough food to survive.  Each turn, you will have the opportunity to take actions, including migrating between territories, trying for offspring, attacking other prides, and completing secret missions, which is the other method of earning points during the game.

Each of the prides has a slight mechanical advantage, lending itself to a certain playstyle: 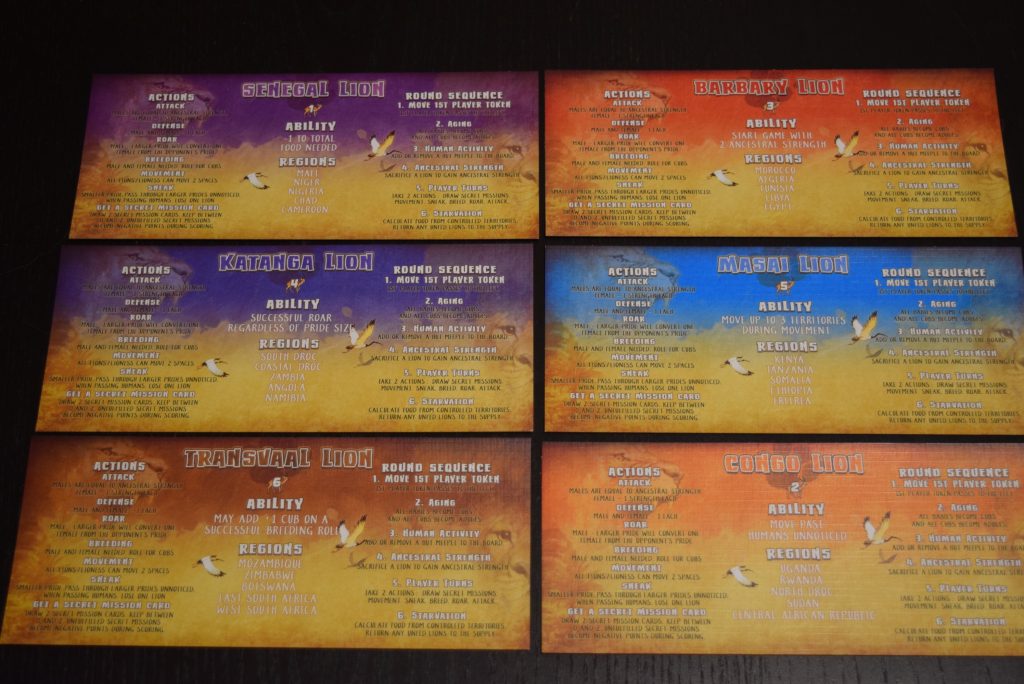 Josh:  These abilities are all useful, but none of them are so powerful that they force you to play a certain way – they’re just a good place to start building your strategy around.

Jess:  I don’t know – in my plays as the Masai lions, I was able to use their increased mobility to zip around the board a bit, making it easier to complete secret missions.  Incidentally, I love the idea of lion spies, all deployed on secret missions across Africa.

Andrew:  That would be a great game, actually.  But yeah, while your speed gave you that advantage, the humans and other prides were constantly in your way, and you couldn’t breed any faster than anyone else, so it was easy to get too spread out.

Rounds of Roar: King of the Pride are broken up into phases, with cubs growing up into adults, older males retiring to strengthen their pride, and human settlements appearing across the board.  The humans are a critical aspect of Roar: King of the Pride – they act as a timer for the game (a certain number of huts will be added, then removed, over the course of the game based on player count), but they also form dangerous barriers to the expansion of the prides.  When a settlement drops onto a space, all adult lions there must scatter, and the young are lost.  Furthermore, moving through human territories is automatically lethal for any pride other than the Congo.

Jess:  I’ve got to say, I was so psyched for Roar: King of the Pride – it’s gorgeous and it’s about lions!  I love all that!

Josh:  Yeah, for sure.  In order for the game to work, you really have to be willing to knock other players around, and to be prepared to deal with them doing the same to you.

But, as they say, survival of the fittest is the law of the land, and if you’re not willing to get your claws bloody, there’s no chance you’ll come out on top.  Our main complaint about Roar: King of the Pride had to do with the length of the game.

Firstly, it feels like a very long game at lower player counts.  3 player games last 15 rounds (more players play for fewer), and that feels like a lot.  The game could have easily stopped after about 9 to 10 rounds – we had more than played our share at that point – but the game doesn’t end until a certain number of huts are added to the board and then removed from the board.

Andrew:  Theoretically, this mechanism creates some interesting tension in the game progression – there is less and less territory as the game reaches its midpoint, forcing the prides to fight for dominance over dwindling space and resources, but then as huts get pulled off the board, there is a sudden ability to expand in the late game that makes for more opportunities…but ultimately, it was just too large a sitting for the gameplay style. 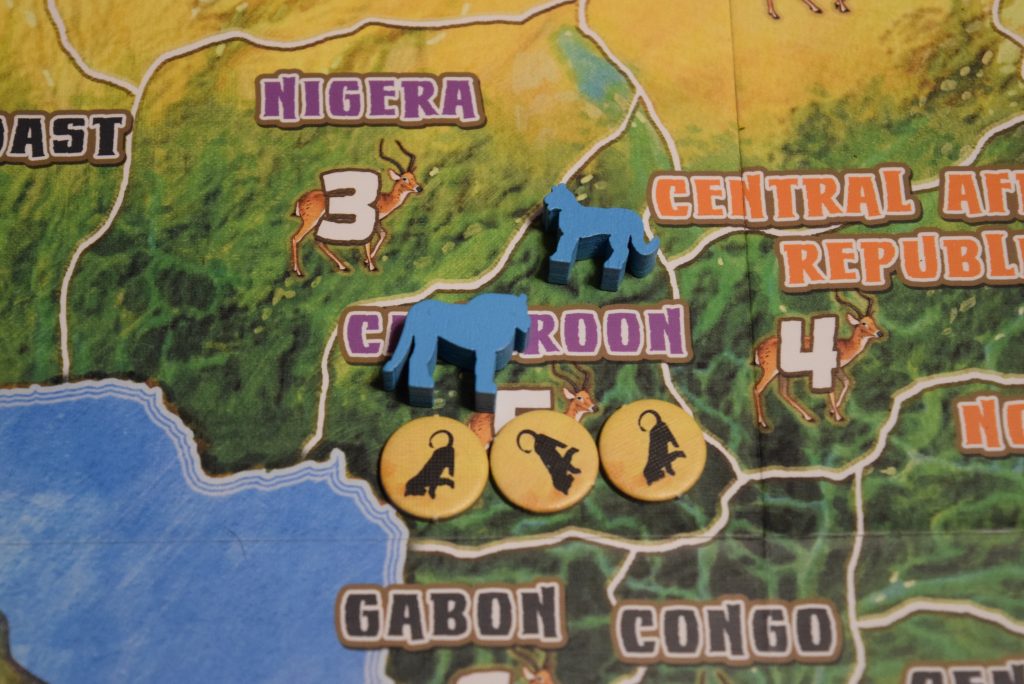 The other way that the game length worked against Roar: King of the Pride is the fact that so much of the game is about end game scoring.  You can have a fantastic early game; establish your pride, breed carefully, expand successfully, control key territories for food.  But you will need to desperately hang on to your lead the entire too-long game, since those piles of points you’ll score for your population and for your food supplies only matters at the end of the last turn.  Roar: King of the Pride sometimes left us feeling frustrated because it was entirely possible for early successes to effectively mean nothing, should the game (and your fellow players) manage to undercut you towards the end.

Jess:  Yeah, the more you have, the more you stand to lose, and since none of it really counts until the end, you’re just desperately trying to keep your board position by breeding like mad and shanking the other prides whenever you can.

Blocking other players from expanding, stealing their mates, and taking every opportunity to out-maneuver them is key in Roar: King of the Pride – prides that rest on their laurels only pave the way for opponents to be victorious.  These things are not particular negatives, but it is an important thing to be cognizant of, should you find yourself playing Roar: King of the Pride.

Andrew:  Which, I guess, brings us to the part where we talk about recommendations.  We’ve focused a lot on what we didn’t enjoy as much in Roar: King of the Pride.  Thoughts here?

Jess:  Well, this one wasn’t for me, and that sucks because I’m in love with the theme and the core concept.  I guess it just didn’t feel like I got to do enough, and there was so much emphasis placed on having your position attacked that it got tedious.

Josh:  Where Roar: King of the Pride lost me wasn’t really the contention, though I wasn’t really expecting it.  For me, it’s the fact that breeding, which is a critical part of the game, is driven by a dice roll that can result in a total failure!  There were plenty of turns that we just spent trying to get more lions out on the board, but bad luck on the die wasted those actions and arbitrarily weakened the player who couldn’t manage a good roll.

Andrew:  And not only that, the gender of your cubs is random!  So even if you’re not getting blocked out by the dice, there’s always the chance that you won’t get the gender lion you need to keep your pride growing anyway!

Jess:  Assuming another pride doesn’t come and eat them.

Josh:  Or a bunch of humans, the jerks.  What about you?

Andrew:  Unfortunately, I don’t have much of a dissenting opinion here.  Roar: King of the Pride was a miss for me too.  Fantastic presentation, some clever ideas, but ultimately a little too much Risk DNA spliced in here for me to really enjoy.

But maybe that’ll be music to your ears!  And so, if the idea of a potentially vicious area-control game tickles your fancy, then we can say that Roar: King of the Pride has no shortage of production value and opportunities to mess with your fellow players – just go in knowing that there are some swingy, random mechanics that could up-end your strategic gameplay.  That said though, for us, we’d be lying if we said we strongly recommended Roar: King of the Pride.

Andrew:  …I withdraw from this territory.

We were really bummed that Roar: King of the Pride was a miss for us, but some of the things about it we liked most can be found in some other titles.