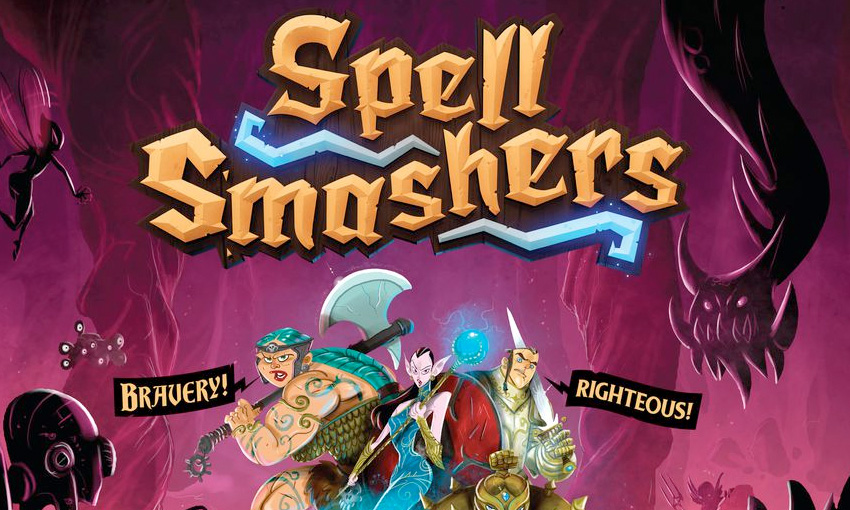 Spell Smashers is a spelling game for those who like to use their words to resolve conflicts (specifically conflicts with classic fantasy monsters), gather piles of spelling-themed treasure, and gain trophies and treasures based on their linguistic acumen.

Andrew’s not generally a fan of spelling games, so when he wants to play one a second, third, or even fourth time you know it’s good!  Spell Smashers by Renegade Games combines all the monster slaying and loot grabbing fun of a dungeon delver with the puzzley nature of a spelling game, all wrapped around some very tight hand management mechanics! 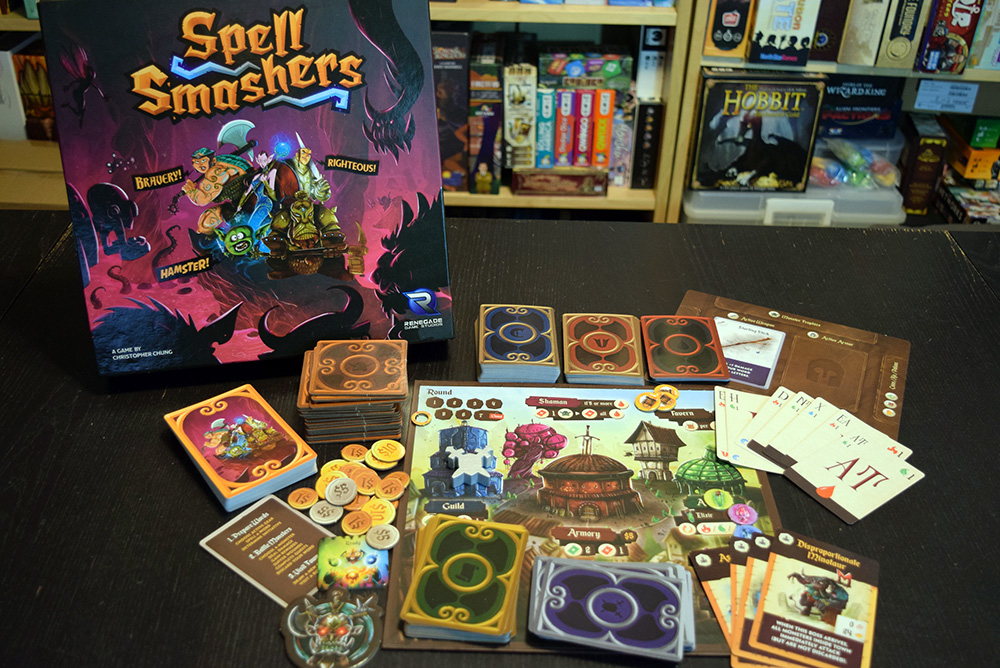 In Spell Smashers, each player is a heroic adventurer who sets out to battle monsters and gather treasure, seeking to be the one with the most glory by the game’s end.  Monsters in Spell Smashers are represented by a combination of tiles and cards which form unique challenges – each monster has a set number of hit points and other properties, but they are modified randomly by the tiles that they are paired with, resulting in lots of little variances in challenge.

Like our parents kept telling us growing up, the best way to solve a conflict is with your words, and in Spell Smashers, you’ll blast your way through monsters by applying the best words you can craft using your hand of cards.  Each letter adds some damage, though its elemental affinity can interact with the monster you target to either increase or decrease your effectiveness.  And the player who slays a monster takes its trophy, both acting as end-game points as well as a permanent letter for use in future words. 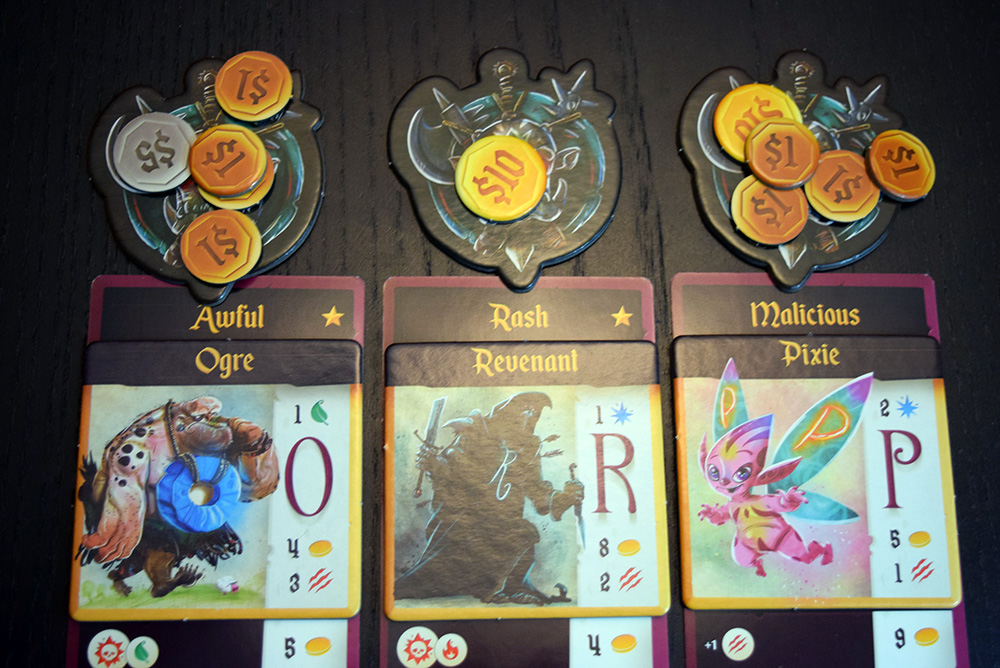 Of course, the monsters aren’t going to take that lying down – they hit back every time you come at them, leaving your hand potentially full of wound cards – difficult-to-use letter combinations that are challenging to remove from your hand, potentially jamming up your ability to make words on future turns.

Each time you slug a monster, you’ll drain its HP in the form of coins, which you can then cash in around town between bouts of foe-thrashing.  In town, you’ll be able to heal your wounds, buy equipment for better smashing, brag at the bar for some bonus points, or grab new quests to undertake.  After 7 rounds, whoever has managed to grab the most points is the best spell smasher!

Jess: So what do you think?

Jess: Wait, was that clever word play?  I thought you hated puns and their ilk.

Jess: I totally agree!  I really like the format of the game – you’ve got limited options with which to make your word, so you need to consider only the letters at your disposal.  Sure, it can be a little frustrating when you have to mulligan, but since you can control whether you’re drawing from consonants or vowels each time you pull cards, you can almost always come up with something – even more so once you get a permanent letter or two from defeating monsters.

Andrew: Actually, you bring up a point – one mild ding to the game is that it’s usually not the person who attacks a monster first who gets to score that monster’s points. There’s a lot of softening them up for other people to finish off.  Sure, you get coins for doing it, but it can still be frustrating to have it happen.  But that’s really my only dig – everything else is really slick and lots of fun.

Jess: I think that Spell Smashers really succeeds in being more exciting and inviting than your usual spelling fare. Between the monster trophies giving you extra letters to work with and your gear giving you bonuses like additional damage based on the letters you use or even wild letters, you don’t often need to reach very hard to find a word to spell (unless, you’ve weighed down your hand with wounds, but then you can always heal up by visiting town or drinking a potion). 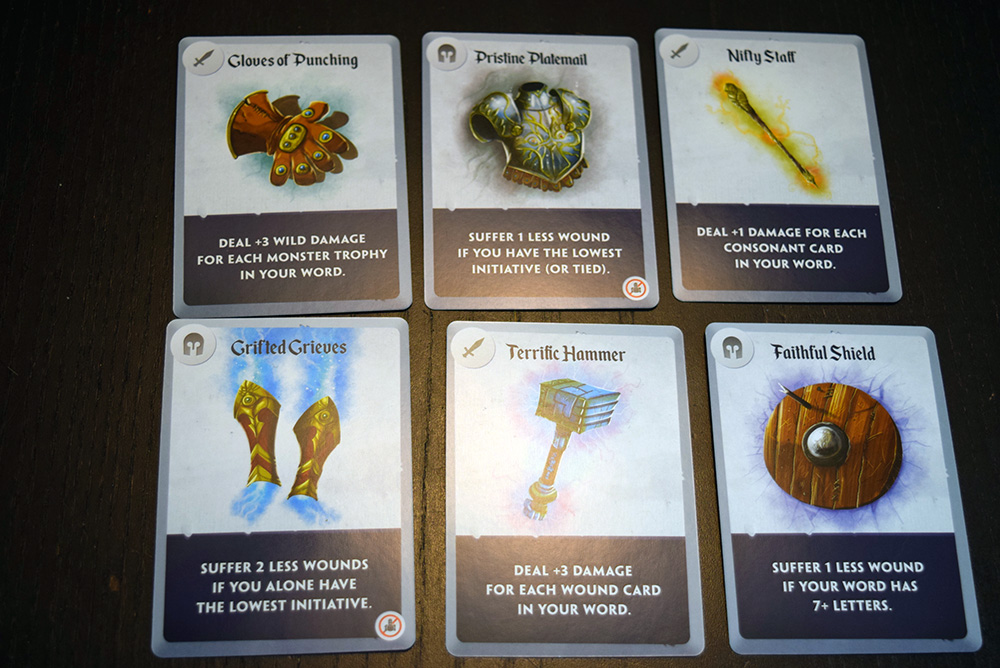 Spell Smashers is the kind of game I can bring to game night and be confident that most everyone will have a fantastic time, and it’s a great game night addition!
[amazon_link asins=’B07FMR6BKH’ template=’ProductCarousel’ store=’gameosity-20′ marketplace=’US’ link_id=’2b9e2aab-f7e4-11e8-bf17-89461f52477b’]

If spelling’s your game, then we highly recommend checking out Wordsy from Formal Ferret Games or Word Domination from Fowers Games.  Both of them bring a completely different twist on the spelling game genre, with Wordsy creating a tense, timed race that encourages creative use of your spelling muscles, while Word Domination introduces a really clever area control core to the genre.  Both are extremely good games, and neither overlap with Spell Smashers’s core mechanics.
[amazon_link asins=’B071L32BDV’ template=’ProductCarousel’ store=’gameosity-20′ marketplace=’US’ link_id=’93e8c60c-f7e4-11e8-b180-254ee39e00db’]
Word Domination can be ordered directly from Fowers Games, with free shipping in the US, UK, and Germany!