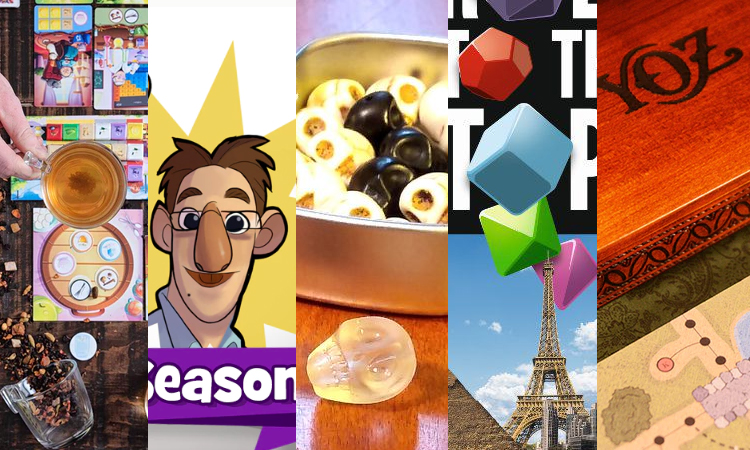 Friday rolls in on a hard-packed road of Kickstarters. Some may fail and some may succeed, but all shall be judged. Those lucky few that display ingenuity, graphical charisma, and a propensity for fun join the honored ranks of my weekly Kickstarter list. Welcome to the Fave Five…

Boy, that got dramatic. Ok let’s do this!

I have learned a new word today “Tea-rrific” and I’m thinking it might just describe this new
card drafting/set collection game called Chai. In the game everyone plays a tea merchant who specializes in a type of tea. You’ll visit the market, purchase ingredients, and try to fill your customers orders.

At the end of the game players score victory points from their filled orders, leftover money, and any bonus points they may have earned. The person with the most points is by all rights a tea master and wins the game.

I love the theme, the gameplay seems pretty easy to learn, and the components look delightful. If you are a tea lover or just like card drafting and set collection then Chai might just be your cup of tea (Don’t fire me for the pun Andrew. It was perfectly brewed). Take a sip of Chai on Kickstarter here!

Edo Baraf, game designer and content creator is is headed into his fifth season of Gaming With Edo, a video series where he reviews  board games, chats with other industry folk, and and shares exciting news about his publishing company, Pencil First Games.

The Kickstarter is helping fund new videos, up the quality through some tech upgrades, and ensure that he can keep creating awesome content. I love supporting my fellow creators so I hope you’ll take a look at Edo’s campaign and check out his videos at: The Gaming with Edo YouTube Channel.

Andrew is a big fan of games that fit in his pocket. He’s got several board games that are compact enough to fit inside a mint tine and now it looks like he might need to pick up another. Mint Tin Mini Skulduggery is a portable push-your-luck game.

In the game you’ll roll dice and, with a little help from the spirits, collect skulls. You can use powerful crystal skulls to wreck your opponents roll or save yourself from the dreaded Skullduggery which will shift everyone’s points around. I love the little skulls in Mint Tin Mini Skulduggery. They totally look like something out of a pirate movie and could easily be chucked into a cloth bag for extra piratey-ness. Learn more about this tiny game on Kickstarter here.

Josh is the only die-hard Corné van Moorsel fan I know personally, but I gotta say, I’ve enjoyed all the Moorsel games he’s introduced me to. Thus I am excited to see that Moorsel has a roll & write game on Kickstarter.

As with many a roll and write, the goal of the game is to fill in the spaces of your sheet. You do this by rolling dice and filling in the rolled values from the bottom to top at your sheet. Each number must be higher or equal to the one below it and you can combine dice to make bigger numbers. As a bonus, this Kickstater gives backers access to an online version of the game so they can play anywhere digitally. You can learn more about Roll to the Top here on Kickstarter.

Yoz – A World of Adventure

Oh man do I love a showpiece game. Handcrafted and beautifully illustrated, these kid of games lure me in. I can’t vouch for their quality of gameplay, but boy they sure are pretty and Yoz is up there. The game is played by generating a random map by dealing out tiles and then traversing those map tiles to find treasure, fight monsters, and making your way to the Castle of Yoz.

The game is cooperative so players must work together to get to the castle before the automated thief does. I’m hoping the creator releases the rules as their campaign doesn’t really give many more details on how to play. Until then you can ogle it with me by heading over to the Yoz Kickstarter here.

Which Kickstarters are you excited about this week? Let me know in the comments below!