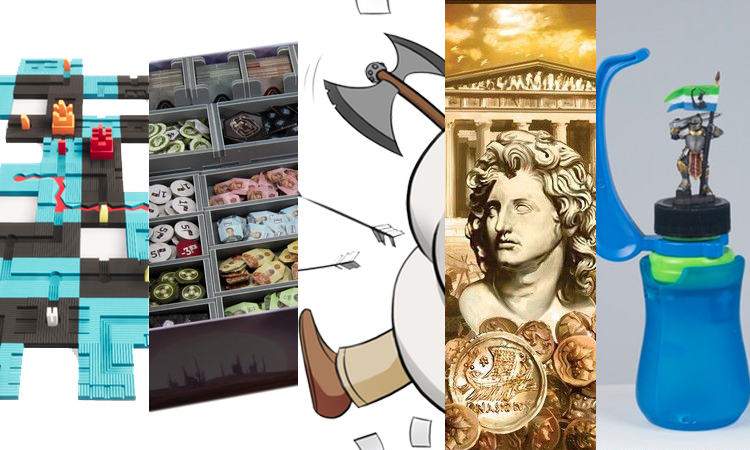 The holidays are upon us! Let’s celebrate with some delightful Kickstarters! 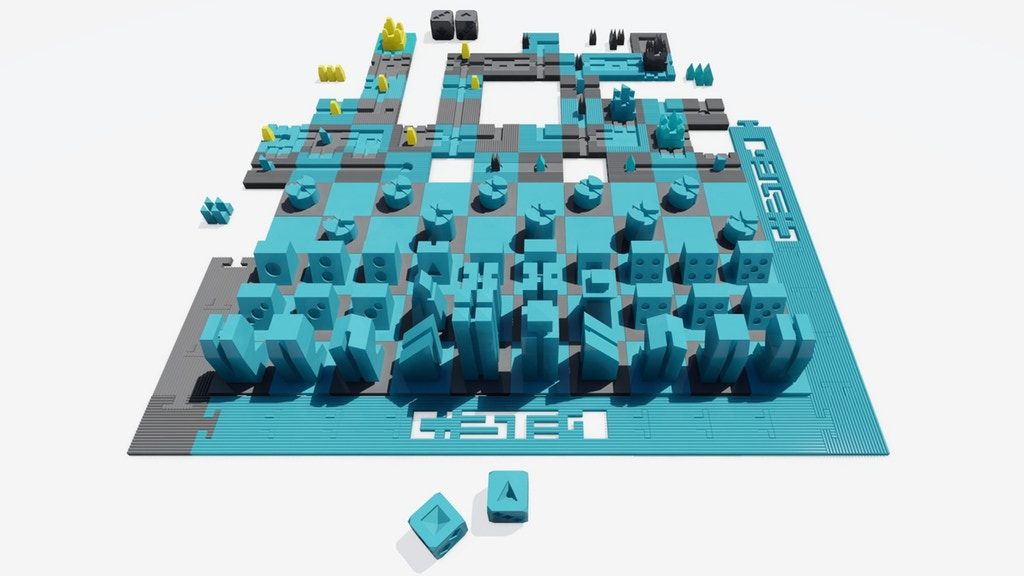 Game systems are a cool idea. You buy one set and can play multiple games using the same pieces. Chestsgo takes this one step further by adding an app that houses the rules and acts as a scorekeeper and timer. 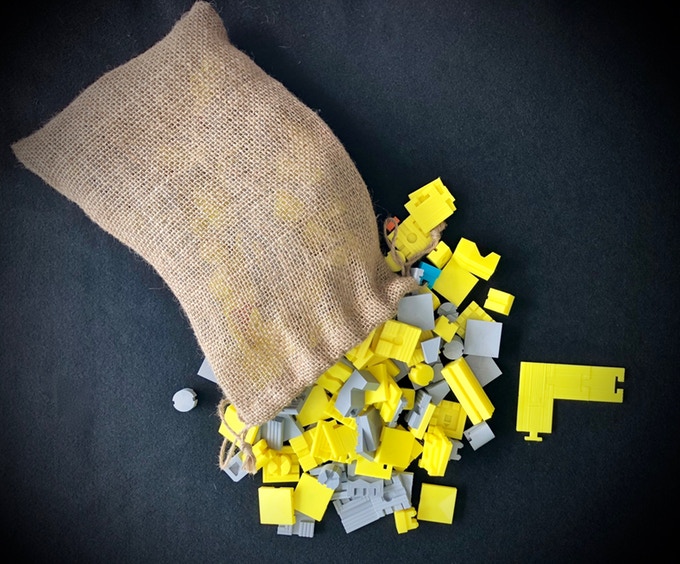 The bits for the game are visually appealing and I like how you can snap pieces together to form different boards. Icefired Games already has 15 different games you can play with the Chestego system and are constantly working on more. You could even come up with your own! You can learn more about the Chestego system here. 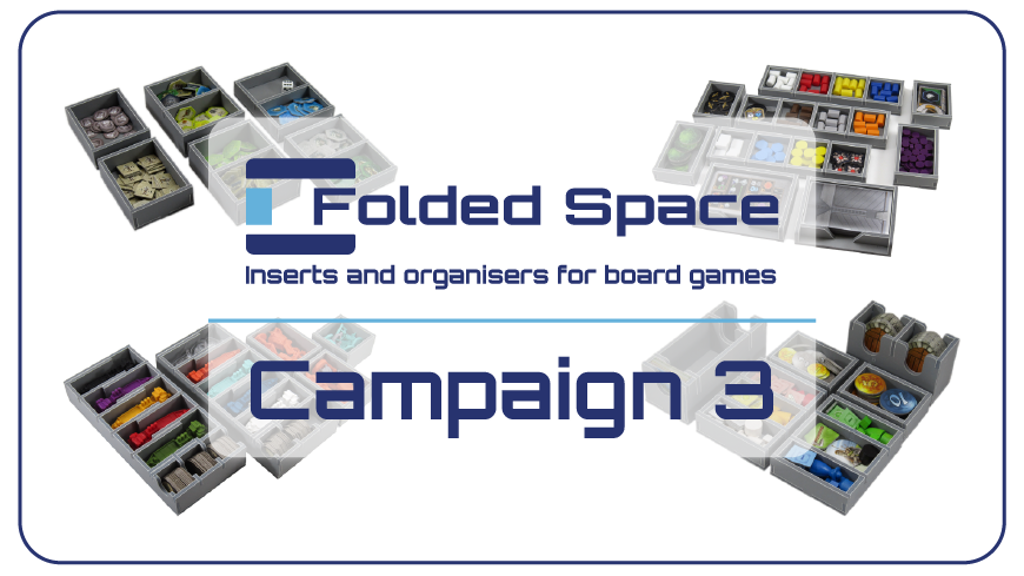 I’ve put together many a board game organizer and most of the time there are a few constants cross the different styles:
1. Most are made of wood and laser cut. This can lead to frustration if something isn’t perfectly cut. You need to carefully saw your way through the stuck part and find some sandpaper to file the rough spots down so it will all fit.
2. A lot of designs are made with very tight joints so they they stick together without glue. Getting these pieces to slide together can be a trial and a half. I have occasionally given up on an organizer for several hours just so I don’t throw it out the window in frustration.
3. Wood adds weight.

Folded space is none of this nonsense (not to say that wood organizers are bad. I just can’t with them sometimes). 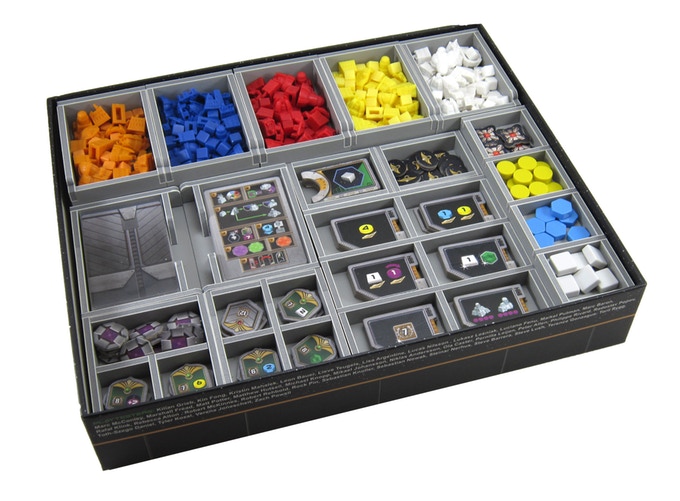 Designed on Evacore, a printed cardstock which is laminated to EVA foam, these organizers are featherweight yet sturdy, easy to pop together, and only require a little glue. I assembled three recently and they all took about 15 minutes each. If you are looking for low-cost organization solutions that work, check out Folded Space’s new Kickstarter campaign where they are funding 15 organizers for many popular games. You can find out which ones by heading over to the Kickstarter campaign here. 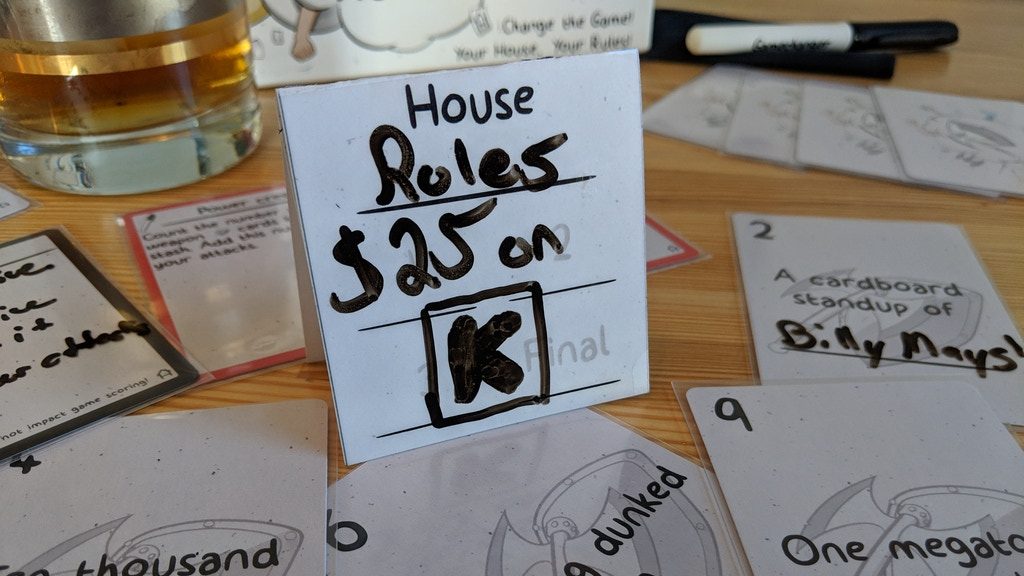 I’m kinda hard to please with party games nowadays. So many rely on shock value to carry the game vs. fun mechanics that I despair at the party game scene. So it was a nice surprise to come across a little card game that lets you be in control of rules. Basically House Rules is a hand management / take-that game where players horde weapons over 3 rounds. Whoever has the biggest stash at the end of the game wins. 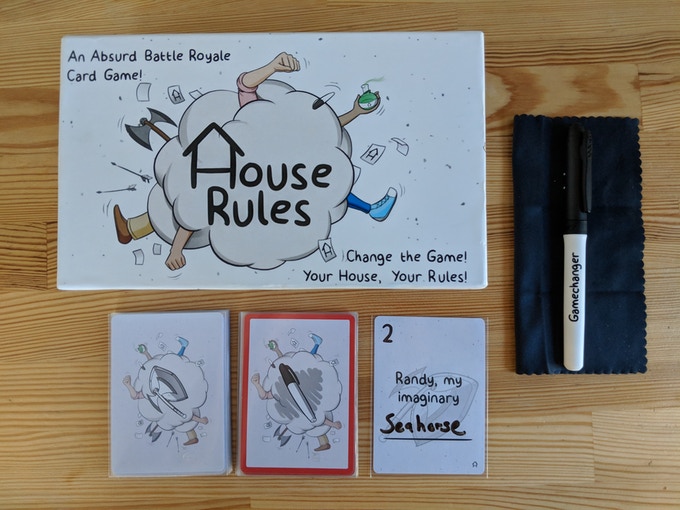 Where the game gets interesting is that at the beginning of each round players can choose which rules will go into effect for the round. Once per game you can actually make up your own rule, but at lest one other player needs to vote it in for it to go go into effect. You can also write on the weapon cards to personalize them as all the card in the game are dry-erase friendly. this looks like a fun little game that has the potential to be really silly depending on your crowd. Take control of your party game with House Rules on Kickstarter here.

Roll Through the Ages: The Iron Age 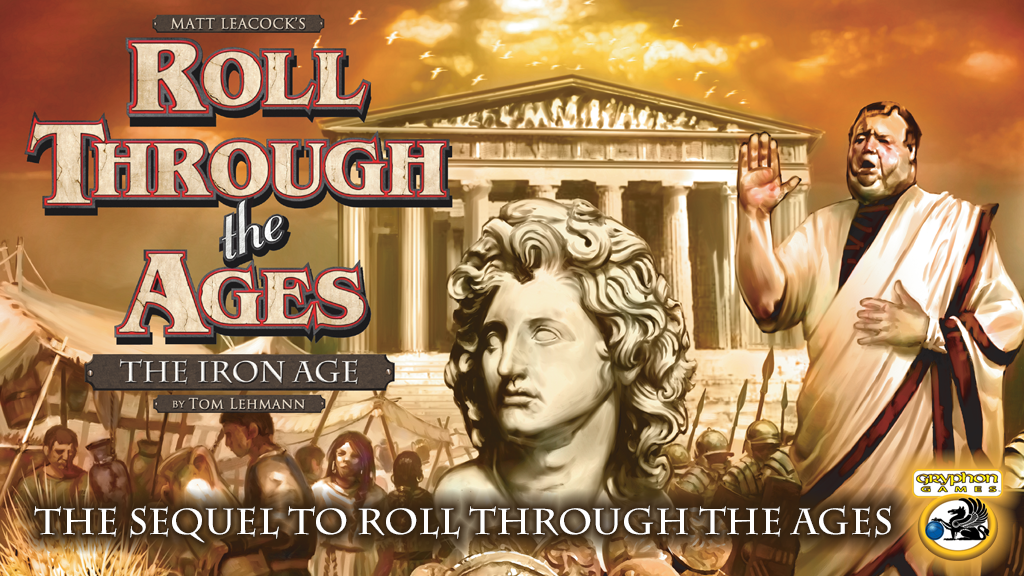 Designed by Tom Lehmann (Pandemic: State of Emergency, Race for the Galaxy, Roll for the Galaxy), Roll Through the Ages: The Iron Age is a sequel to Matt Leacock’s civilization building game, popular Roll Through the Ages: The Bronze Age. In RTTA:The Iron Age you now be working on building cities, gathering armies, and erecting monuments using the strategies of ancient Greece, Phoenicia, and Rome. 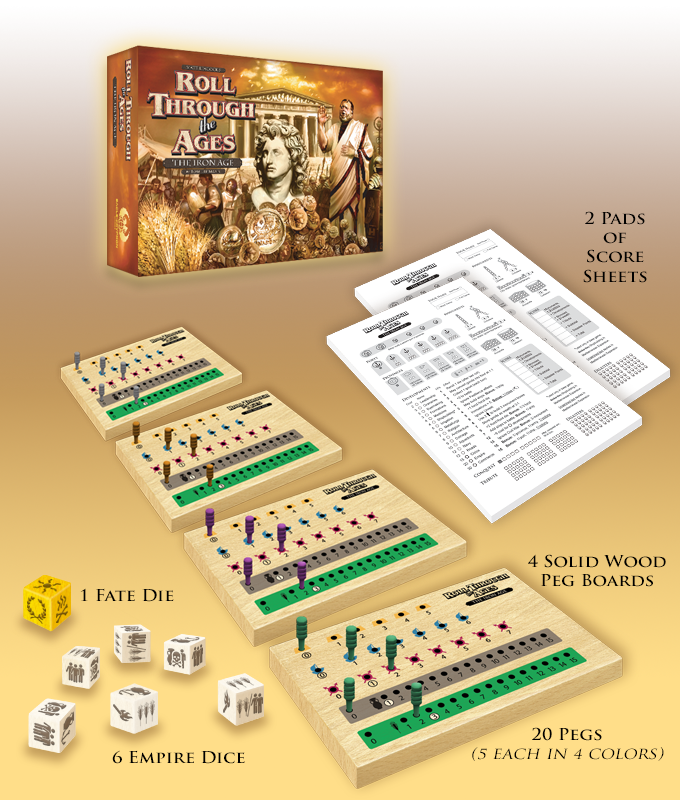 Along with RTTA:The Iron Age  you can also pick up the Mediterranean Expansion which is a wooden pegboard map that all players will compete on to gain benefits like soldiers, food, or innovations. As a bonus, every Backer of the game will receive a FREE copy of Dead Man’s Chest; a pirate themed bidding and bluffing dice game! Learn more about Roll Through the Ages: The Iron Age on Kickstarter here. 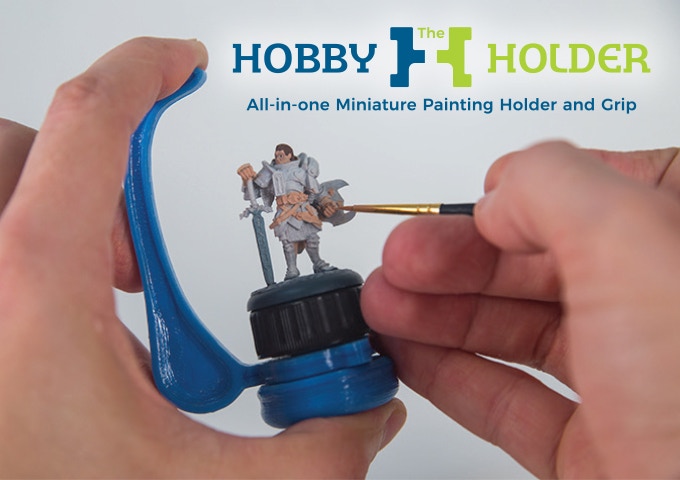 I don’t play a ton of minis based games, but when I do, I’m always tempted to paint them. I’ve been slowly working on painting all of the figures in my Tokaido game and I really love how it adds that touch of personality to the pieces, but man can painting be a pain. Trying to get paint into small areas and add tiny details while my fingers get in the way drives me nuts. Imagine painting a tiny tiger only a few millimeters high on a miniature geisha’s robe only to smudge it as you try not to drop her. Yeah, it sucks. The Hobby Holder looks to aid painters by giving you a mounted grip. 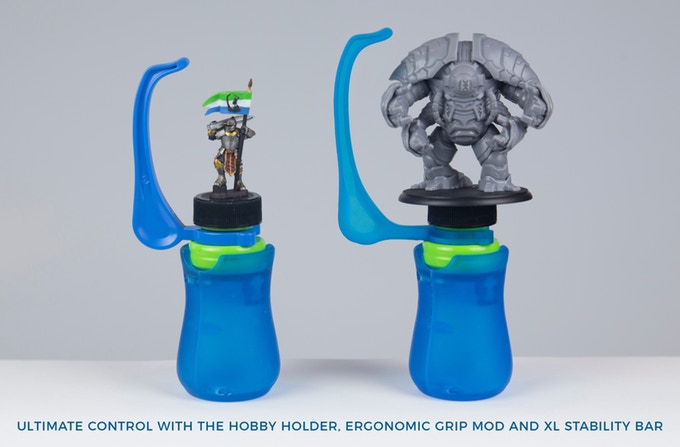 Thus my clumsy fingers never need taint the art I am trying to render. The holder works by attaching caps or corks to the base that you can attach your mini to with a variety of sticky materials like glue or poster tack. The holder also has a stability bar which you can lean your hand on when trying to add fine details. This looks like a really nice tool for any minis painter and I’m strongly considering picking one up myself as maybe then I’ll finally finish off those Tokaido minis finally. Check out the Hobby Holder on Kickstarter here.

That’s it for this week. Which Kickstarters are you excited about? Let us know in the comments below and have