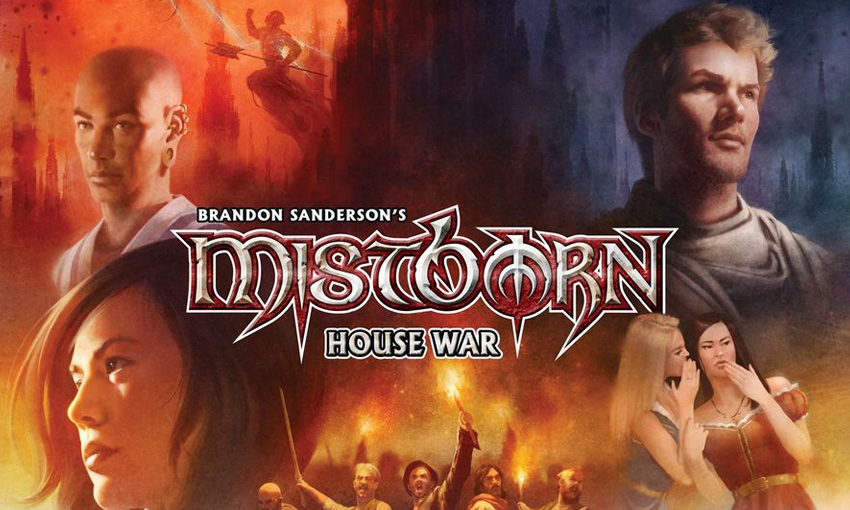 Mistborn: House War manages to do some really interesting things with its semi-cooperative-but-oh-so-assuredly-competitive gameplay.  While the gameplay itself is fairly streamlined, we found the choices to be engaging and the negotiation to be really interesting, especially in light of the alternate victory condition.

I’m a big fan of Brandon Sanderson’s Mistborn novels, but you don’t have to have read the books to enjoy Crafty Games’s Mistborn: House War. 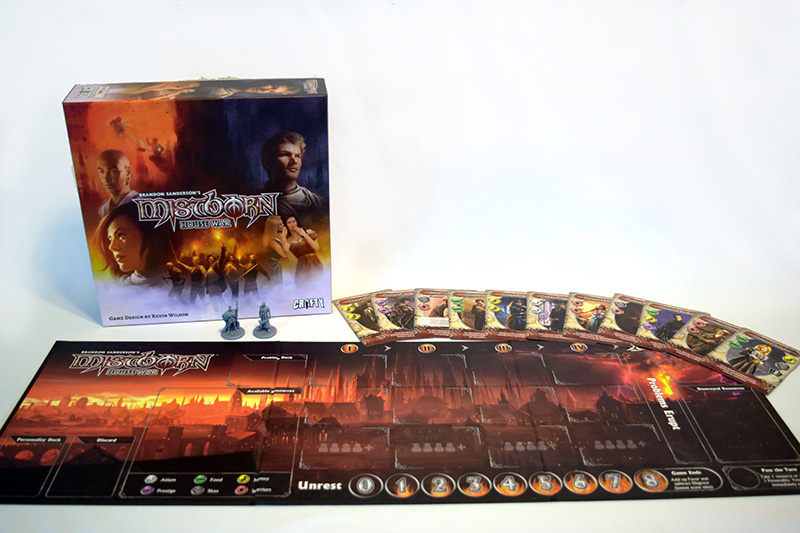 Designed by Kevin Wilson, Mistborn: House War is a hand-management/negotiation game set in the titular Mistborn world where the nobility live a life of luxury…and the peasantry are treated as little more than slaves. This rightfully upsets the peasants and they’re on the brink of revolt. Add to that attacks from outside forces and natural disasters, and the whole empire is teetering on the edge of collapse! It’s up to the players to decide if they will ally with the Lord Ruler and try to quell the problems facing the empire or do a little rebelling and encourage social unrest.

Andrew: It sounds like we should be working to overthrow the empire!

Jess: If we were peasants that would be our main goal, but in House war we’re kinda the baddies, you know, the nobles. So it’s in our best interest to keep the Lord Ruler on the throne lest we lose all our nobley benefits.

Andrew: But if the peasants manage to overthrow the government, then they’ll be coming for us next.

Jess: That’s a problem for everyone else. I, of course, have been a rebel sympathizer the whole time. *convincing wink*

Each player will act as the head of one of the 12 factions in the game and each has a unique power that will benefit you as you play.  These unique powers are useful, but don’t restrict you into a mode of play, which is nice.

In Mistborn: House War, you’ll collect resources in the form of food, money, prestige, skaa (which is basically a fantasy word for ‘slaves’, sadly), warriors, and atium (special magical material).  The resource pool is limited based on the number of players, with atium being in shorter supply and easier to spend than the others, but otherwise they are all functionally identical.

Players spend resources on resolving the ever-growing tide of unfortunate events that will appear each round. There are four levels of “problem” that an event can pass through and if it moves past the fourth tier then it will add Unrest. 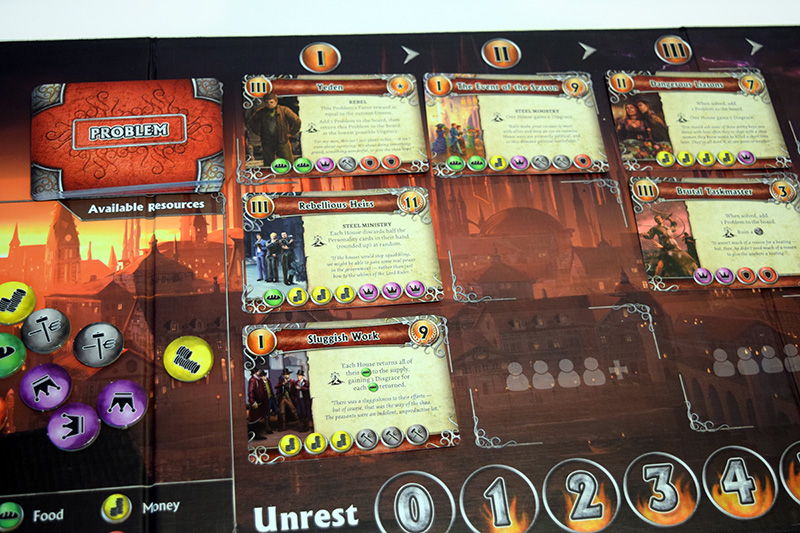 Andrew: Now, players deal with problems by committing resources, but it’ll be rare that a player can deal on their own.  Once a player opens the discussion on resolving a problem, all players are free to make offers on how they can help…and what they expect in return.

Jess: Literally everything’s up for grabs, aside from favor tokens (except the ones that will be gained from solving the current problem – you can divide those any way you like).  You can promise resources, card plays, future actions, favors, whatever the group will agree to!

Should you succeed in dealing with a problem, it gets wiped from the board, and you resolve whatever ‘solved’ effects the card may have (which isn’t always good).  But by failing to solve problems before they fall off the end of the board, they ‘erupt’, causing increasing unrest – and too much of that ends the game immediately. 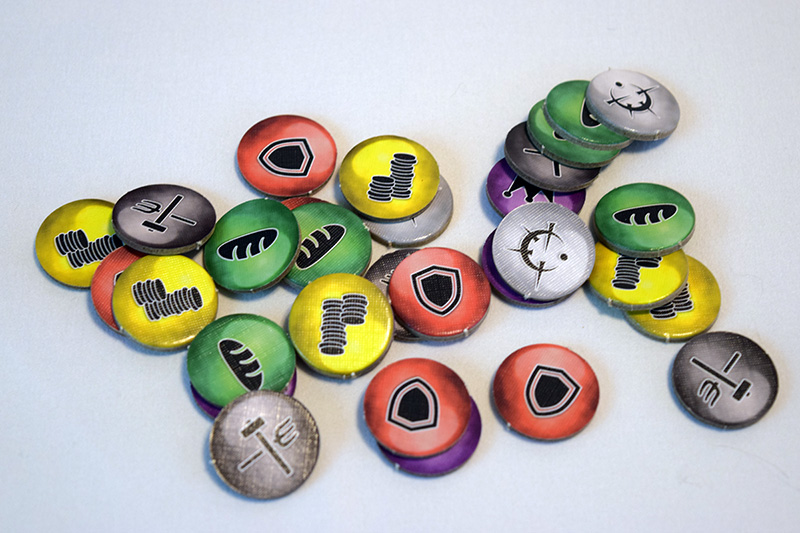 Jess: But the end of the game is actually where things get really dicey! If the players manage to defeat the special event called “Vin” (a character from the books looking to take out the Lord Ruler) then the player who has earned the most favor wins!

Andrew: But if the game ends because too much unrest has accrued, then it’s the player with the lowest favor who wins, since they were the least aligned with the crown, because no one wants to be associated with the guy who just got deposed. 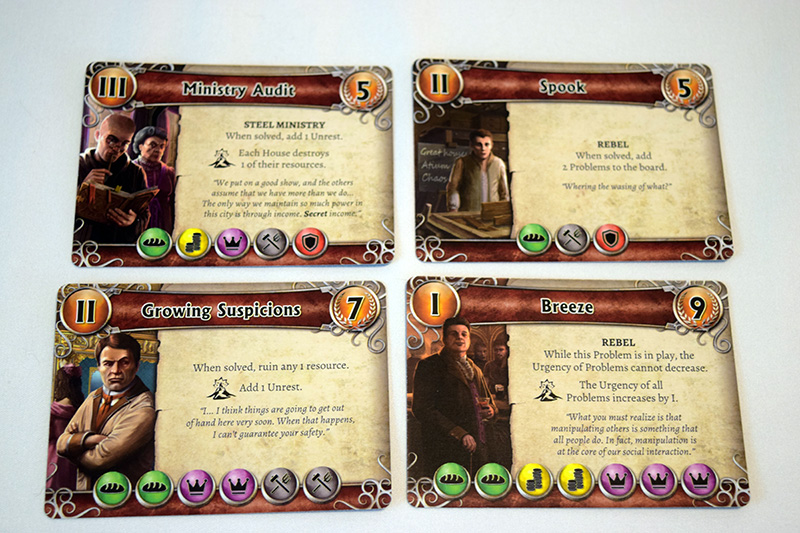 Mistborn is a really intriguing balance between trying to gain favor or trying to collapse the government. While the negotiations over dealing with problems happen constantly, somewhere around the middle of the game, players start to see where they fall in the favor scale and the real scheming begins. What starts out as a cooperative game, as everyone is trying to keep the Lord Ruler in charge so they can reap the benefits of being his pal, suddenly begins to turn.  But since Favor tokens are kept hidden, it’s up to each player to get a sense of where they fall in the grand scheme of things, and to do all that grand scheming…

Jess: I’m not usually a fan of games that feature negotiation as a mechanic. Having to beg opponents to help you always turns me off, but with Mistborn: House War, the potential problems the players face are consequences that everyone will suffer. So the game really incentives you to find ways to work together…at least until it doesn’t benefit you anymore.

Andrew: I agree on both points.  I think what Mistborn: House War does really well is it keeps things interesting, so that you stay engaged with the game even when you’re trailing in points (especially so, actually).  I really liked this, and I was honestly surprised at how well the mechanics came together. 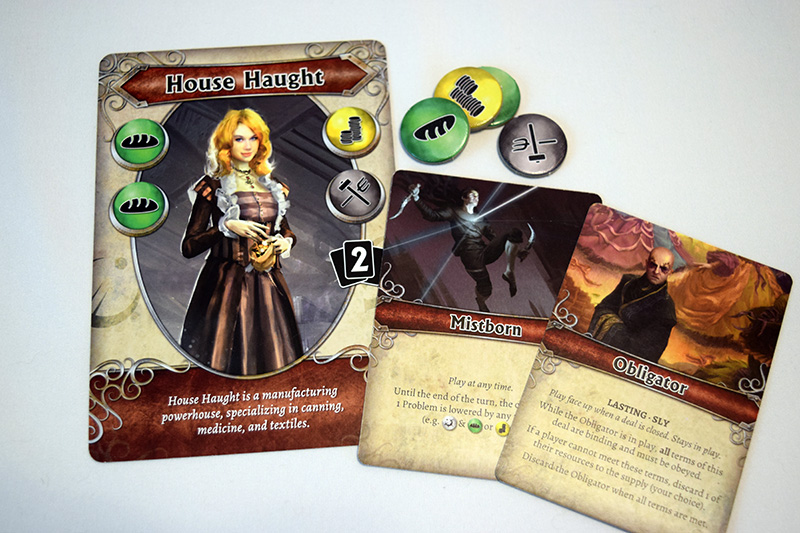 Even without the touchstone of the source material, Mistborn: House War stands on its own. We really enjoyed the natural flow from cooperation to contention and, considering our preferences against negotiation games, it definitely surprised us with just how much fun it was. If you are a fan of the series or love semi-cooperative games with a good bit of suspicious side-eyeing your opponents, then pick up a copy of Mistborn: House War!

For Negotiation: Merchants of Araby – this fantastically produced game from Daily Magic Games is all about smart negotiation and deal-making.  Add to that resource manipulation, worker management, and a small but significant area-influence component, and you have a great game indeed.

For Semi-Cooperative Gameplay: Dead of Winter – This 2014 darling is still going strong, leaving a wake of frozen zombies and bitter, betrayed survivors in its wake.  Dead of Winter has a lot going for it, from production to gameplay – our only advice is to never play it with Jess, because she’s the traitor 100% of the time but somehow also always wins.