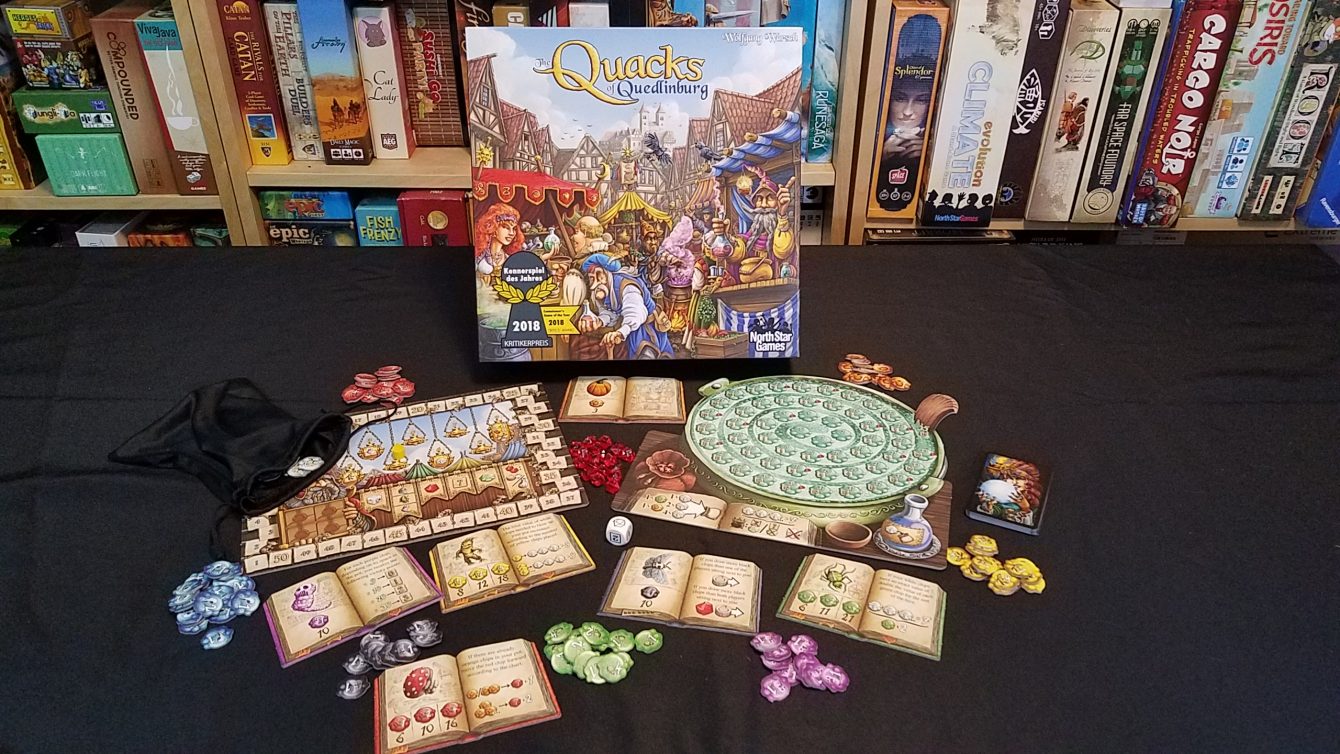 The Quacks of Quedlinberg won the 2018 Kinnerspiel des Jares, and we have no doubts as to why.  This fantastically fun bag building, push your luck game features tons of variety, engaging, exciting gameplay, and more strategy than we expected, given its nature.

Jess: That’s both accurate and woefully inadequate, my dear.

Josh: Yeah, aren’t we going to talk about why it’s so good?

Andrew: Well ok, but let’s be quick because I want to get back to actually playing it.

The Quacks of Quedlinberg, named because all the players are charlatans selling what amounts to snake oil during a town festival in Quedlinberg, is a competitive push your luck style bag-building game where all players are competing to earn the most victory points over the course of the game’s 9 rounds.  Points are primarily earned by brewing the most elaborate potions, but can also come from the use of certain ingredients.

Every player begins the game with a bag full of basic component chips along with their cauldron (for mixing potions, obviously).  Each round, the lead player begins by flipping over a Fortune Teller Card, which will either trigger an immediate or an ongoing effect, and then players simultaneously begin drawing ingredients from their bag, which get added to their cauldron.

Andrew: Now, adding to your cauldron is very simple.  Each chip has a number on it, and it gets added that many spaces after the previous one.  Like so:

You can keep adding ingredients, one at a time, until you either choose to stop or add more than 7 total points worth of white chips, which immediately causes you to bust.

Jess: Once that 8th point of white shows up, your cauldron explodes!…It’s actually less dramatic than it sounds (you’re still in the round), but by busting, you immediately have to stop drawing and your options for how to proceed through the turn are a little limited – we’ll explain how so in a little bit.

The further along your cauldron track you get, the greater your rewards, both in coins, points, and rubies.  Points, obviously, get you closer to winning, while rubies can be spent to perform an handful of useful functions, like recharging your flask (which allows you to toss a drawn ingredient back in your bag before you add it to you cauldron). 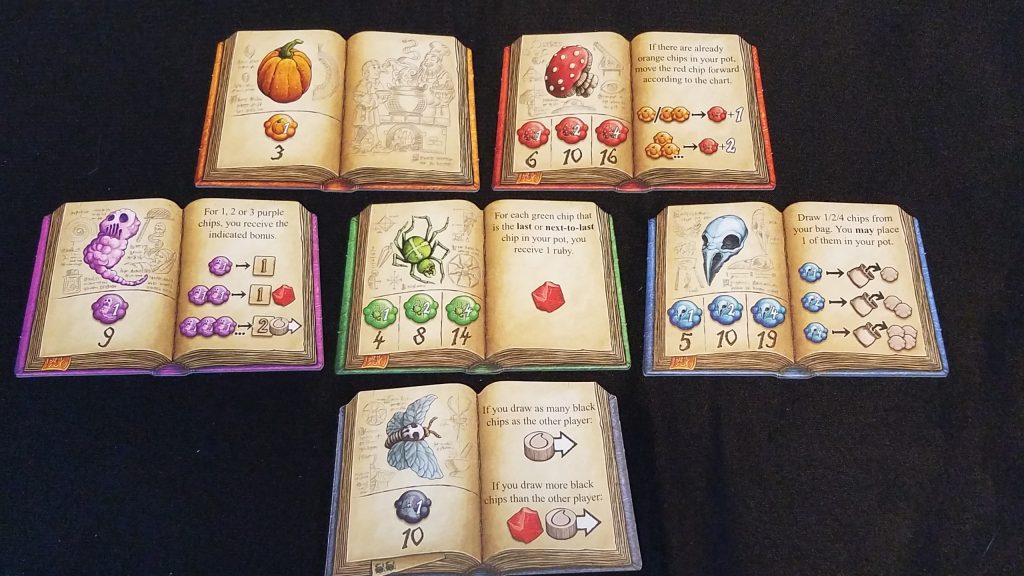 The other thing that your potion will earn you, coins, is what you’ll use to buy new ingredients and add them to your bag.  And here’s where things get awesome.

Each ingredient does something unique, either triggering special effects when they are drawn, or possibly interacting with other ingredients you’ve already drawn.  Some examples are Crow Skull, which lets you immediately draw some ingredients and optionally add one of your choice, or Garden Spider, which gives you the chance to gain bonus rubies if they are your last or next to last pull for the round.

Andrew: So, the consequence of busting is that, at the end of the round, you either get points or coins for buying new ingredients, your choice, and that you don’t get to roll the bonus die (rolled by the player or players who got furthest along on their cauldron track without busting).  It’s not painless, but it certainly doesn’t mean someone who busts is significantly behind his fellow quacks. 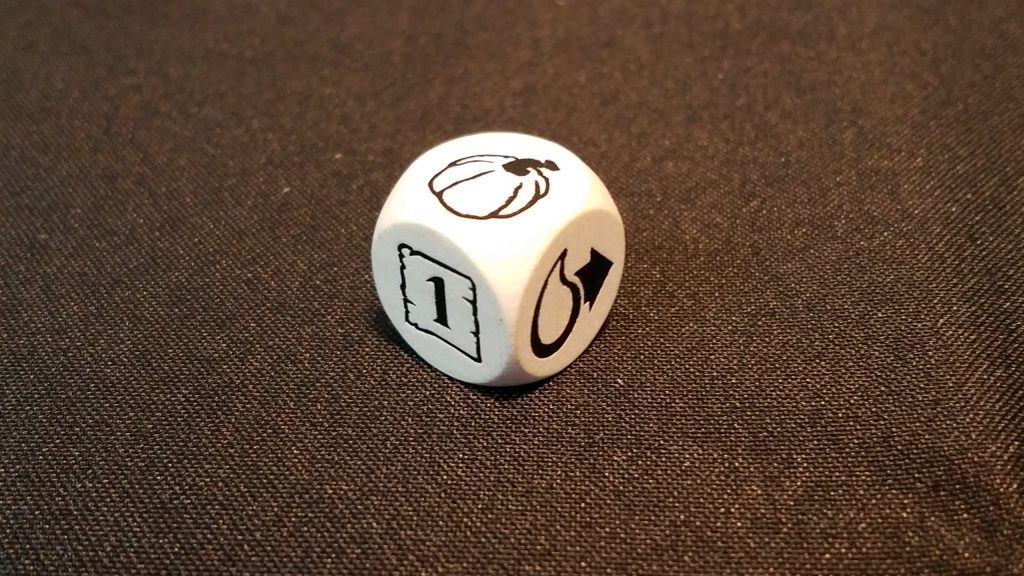 Josh: The thrill of The Quacks of Quedlinberg is pulling those ingredients out of your bag, pressing your luck as far as you can go before you bust.  But the genius of The Quacks of Quedlinberg, what makes it more strategic than just the luck of the literal draw, is how you gather ingredients for yourself – buying lots of cheap ones makes it more likely you’ll draw them and benefit from their abilities, but buying expensive, high-value ones make it more likely you’ll reach further and further along the cauldron track.  It’s fantastic!

And there is a wonderful variety to these ingredients – aside from the humble pumpkin, each ingredient color has 4 unique sets of rules which can be mixed and matched to add huge replayabiliy to each sitting of The Quacks of Quedlinberg.  These variants really do a great job of making each game feel slightly different, creating all sorts of fun ‘ahah!’ moments when your tiles get drawn in just the right sequence to rocket you around the cauldron track.

Jess: What really amazes me about The Quacks of Quedlinberg is how, even with all the randomness of the bag draw, the game still feels strategic and clever, and how it makes you feel clever for having picked out that killer combo of ingredients that scores you that huge swing. 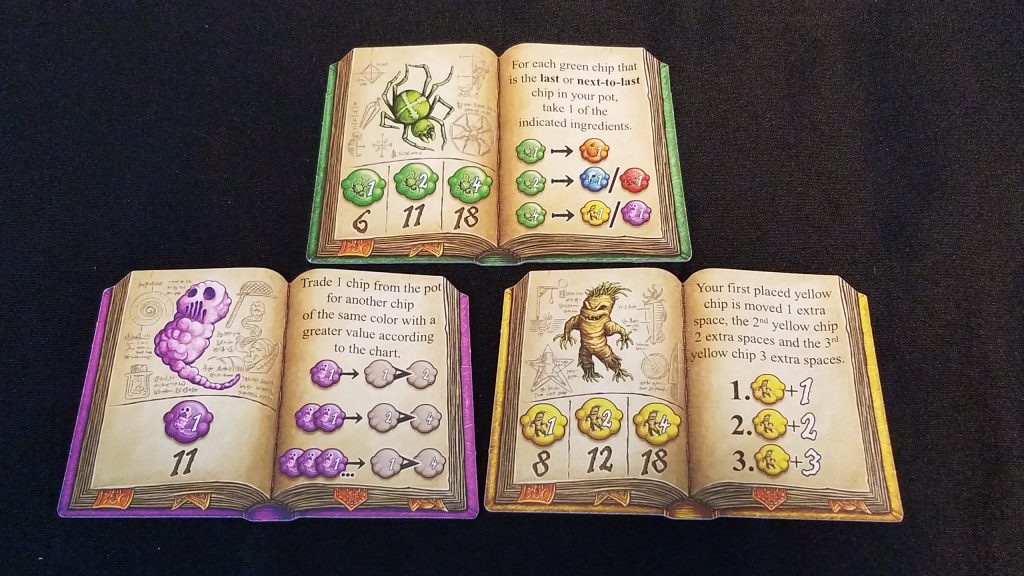 Andrew: And yet, it didn’t ever really feel ‘swingy’ – our scores were generally pretty close, even when our luck was all over the place, and while someone who always busts generally won’t outplay someone who doesn’t, they certainly can still beat someone who plays too conservatively.  There’s a surprising amount of balance at play here! 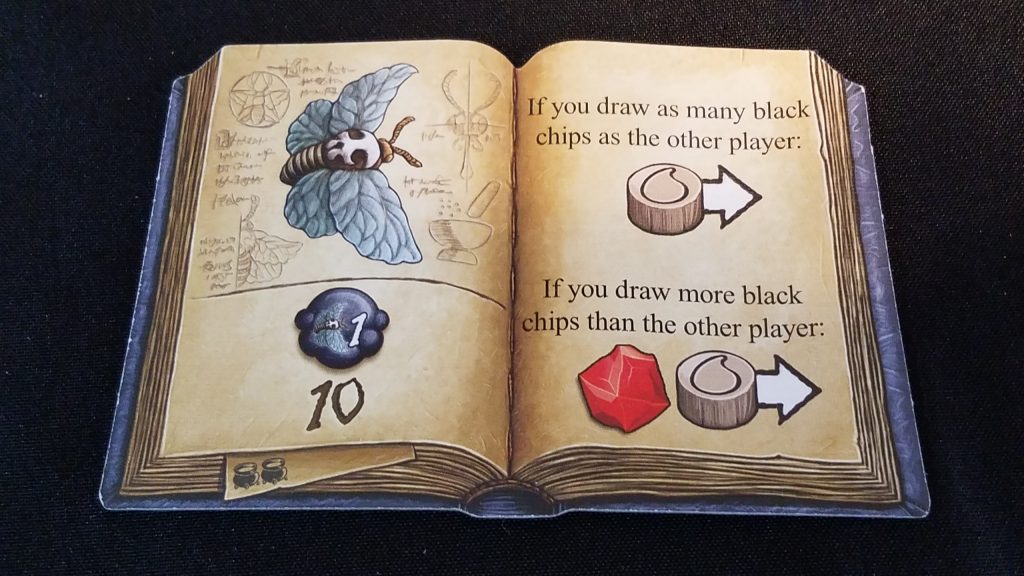 Josh: All that’s true, but what I love most about The Quacks of Quedlinberg is just the simple, easy to engage gameplay paired with the excitement of pushing your luck.  It just works so well!

Andrew: I’m totally on board with that.  The fact is that the Kinnerspiel des Jares is awarded to a game for ‘gamers’, so for those who might be put off by all the randomness in The Quacks of Quedlinberg, I would say simply that it’s at least worth trying.

Jess: Yup.  Huge fun, beginning to end.  And between all the variants of ingredient effects, as well as a whole second game mode that adds even more variety and uniqueness, and what we have here is a total, 100% recommendation from us!

We had tremendous fun playing (and gushing about) The Quacks of Quedlinberg.  If you try it and love it, or if you’re interested in more games that feature some of its core traits, you might want to consider these options: