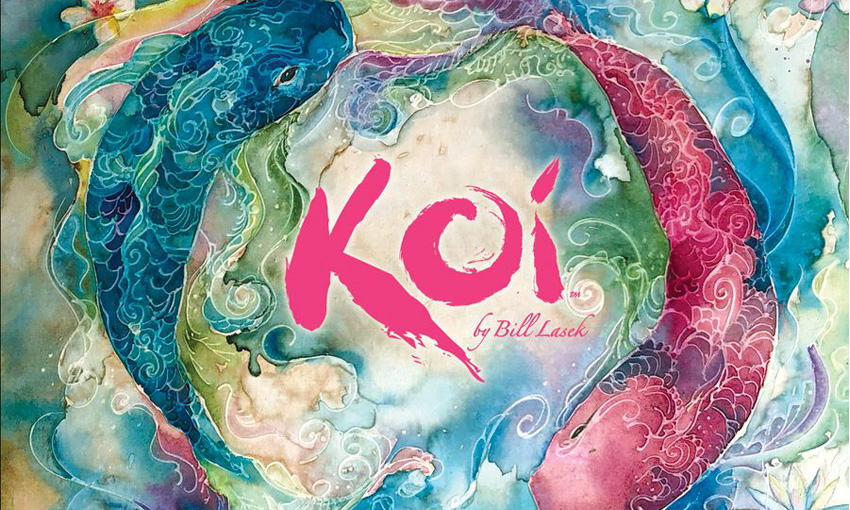 KOI does an admirable job of appearing to be a beautiful, placid game of flowers and fish, while casually concealing its daggers.  The tranquility of the pond belies aggressive, toothy gameplay that we found easy to engage.

I know what you’re probably thinking.  You’re looking at the loveliness of KOI, of its components and its art, and you’re thinking that this is a game that will make for a calm, relaxing time.  Well buddy, that’s just fine…so long as you don’t have a problem with someone else eating all the dragonflies!!!

Jess: Whoa, calm down dude!  KOI is clearly a game of tranquil strategy, where each movement can be planned to put you in an optimal space so that everyone can benefit from the bounty of frogs and dragonflies which are drawn to this lovely pond. 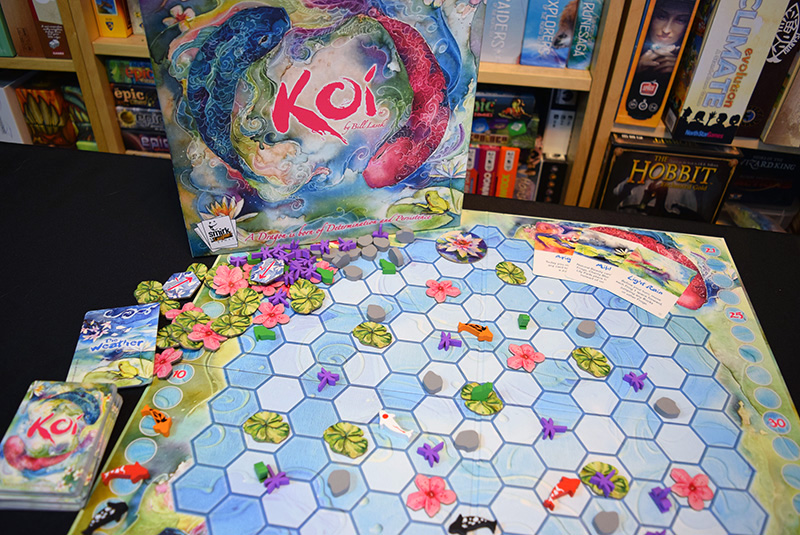 Jess: Well maybe if you weren’t so relaxed, you would have gotten some. 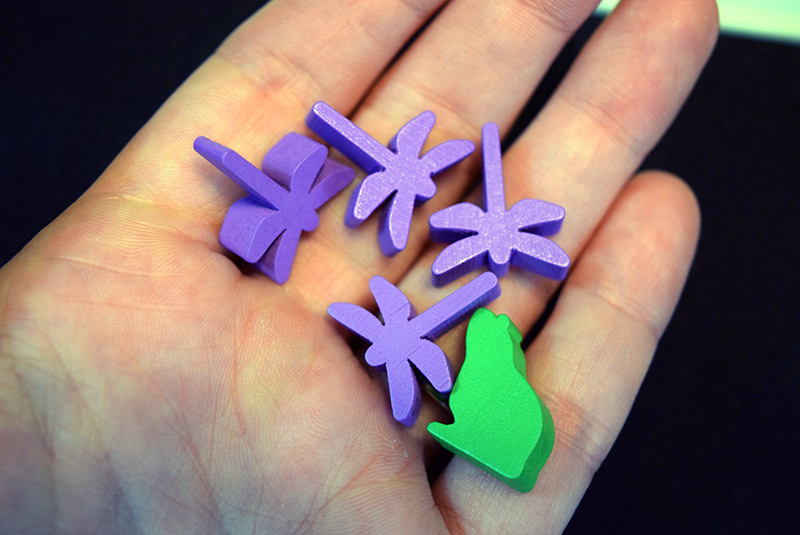 In KOI, each player controls one of the titular fish.  The goal of the game is to earn the most points as you swim about – points are earned by eating dragonflies and frogs, which will appear on the surface of the pond.  Each round, the weather will change, forcing you to adapt your strategy accordingly, and at the end of the 7 rounds, whomever has nibbled the biggest pile of points is the winner. 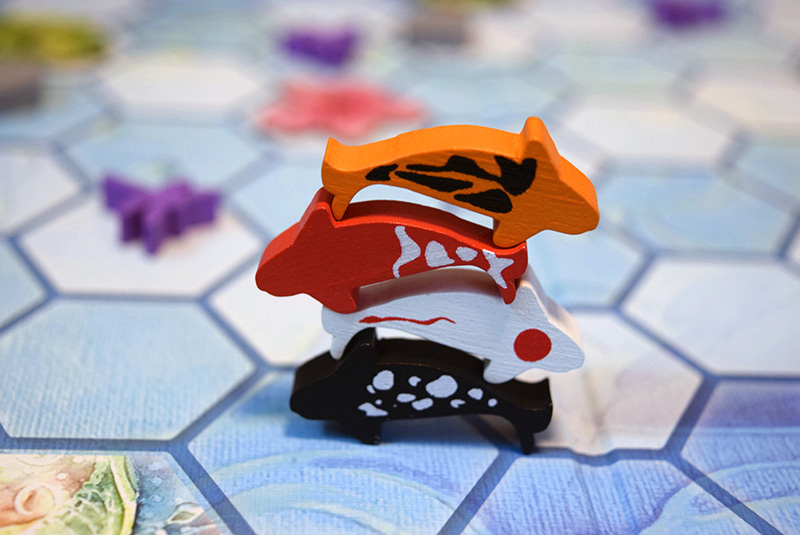 Gameplay in KOI is done through card plays.  Each round, players will have the opportunity to play as many cards as they want from their hand.  Some of these cards, like stones, lily pads, and frogs, add elements to the board: 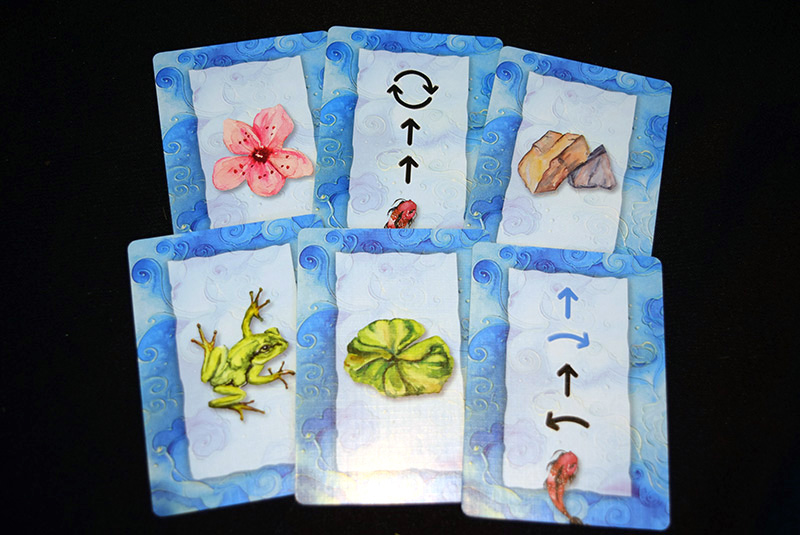 The other kind of card that you might play are the Koi cards.  These cards depict a series of arrows, and are used to move your own koi around the board.  You will read each card from bottom to top, executing the moves, turns, and leaps as indicated (black arrows are mandatory, blue arrows are optional).

Jess: An essential concept in KOI is that your Koi cards are all relative to your current facing – if an arrow says rotate once to the left, that’s left of your koi’s current position.  That’s important!

Your goal in KOI is to maneuver your koi around the pond, eating as many dragonflies and frogs as you can manage in order to score the most points.  However, a necessary part of your strategy must be making sure that your opponent has the hardest time doing just that. 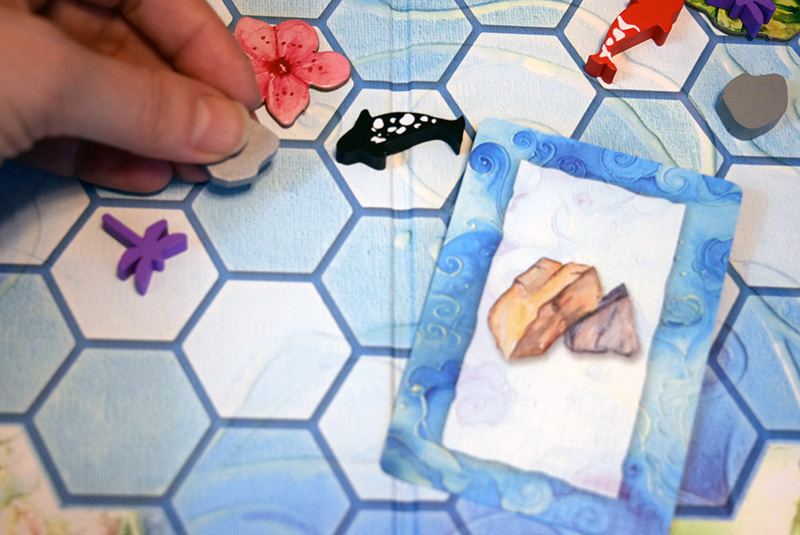 By dropping stones strategically, you can isolate your opponents.  Aggressive frog placement can similarly wipe dragonflies off the board before your fellow fish have a chance to nibble them up.  And cherry blossoms can be used to completely alter sections of the board, throwing their plans into disarray.

Jess: Kidding aside, KOI does have a significant potential for take-that style gameplay.  Messing with your opponents is almost as important as scoring for yourself, since without doing that, it can sometimes happen that a series of lucky draws will put someone in an extremely advantageous position. 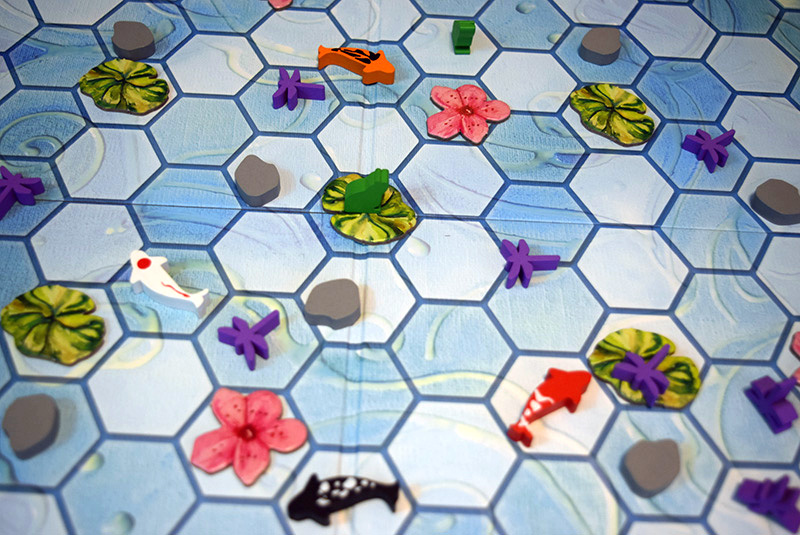 Andrew: Also kidding aside, KOI packs some tight strategy into its lovely aesthetics.  The way the turn structure works means that you will generally only see the bulk of your cards at the beginning of each round, so your ability to plan far ahead is very limited.  Instead, you can focus on making each turn as effective as possible, both for your own scoring and for tripping up your opponents. 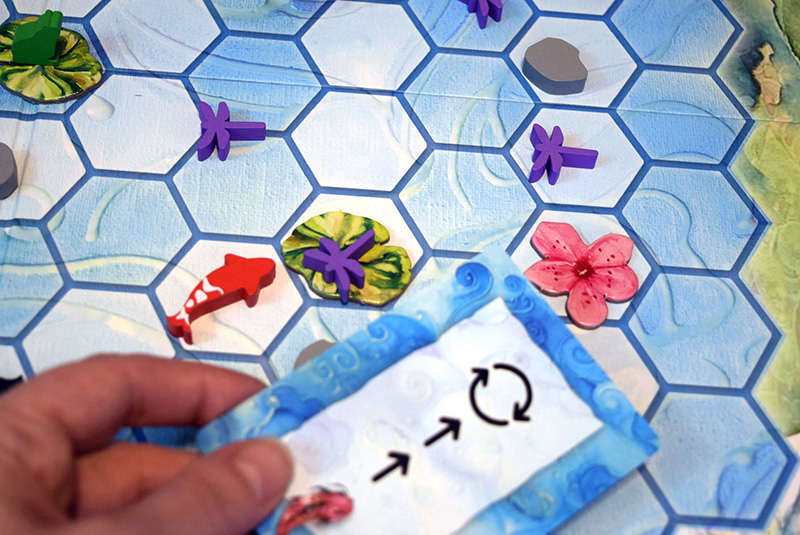 That said, the variety of gameplay is relatively limited – you might drop some stuff on the pond, you will probably go zipping around munching frogs and dragonflies, and you might occasionally get shoved around by cherry blossoms.  What breaks this up and adds needed variety are the weather cards, which add round-by-round changes that will bring just a little spice to this otherwise fairly orderly experience. 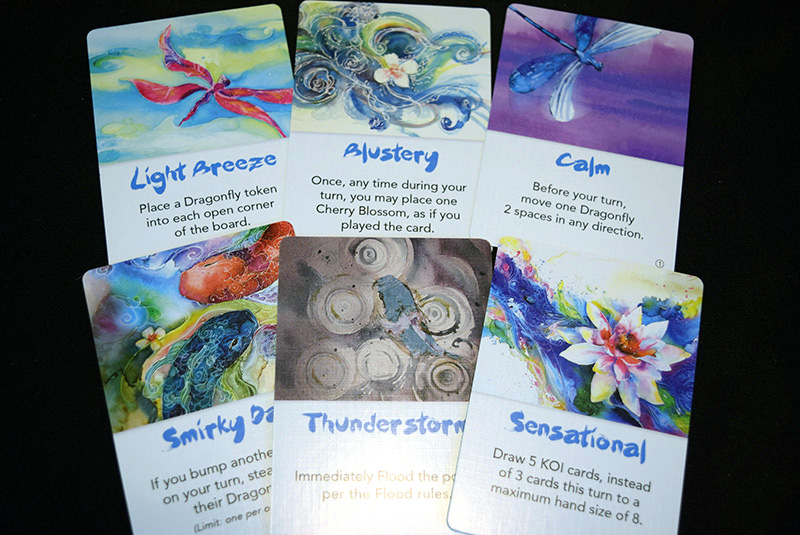 What KOI isn’t (no pun intended, I assure you), is deep.  Though the gameplay isn’t random or mindless, you’re not going to find yourself snarled in serious contemplation.  This is a light strategy game, just a touch more complex than its lovely visuals would suggest, and with just a little hand-holding, it might actually be a really great game to introduce to little ones or less experienced gamers. 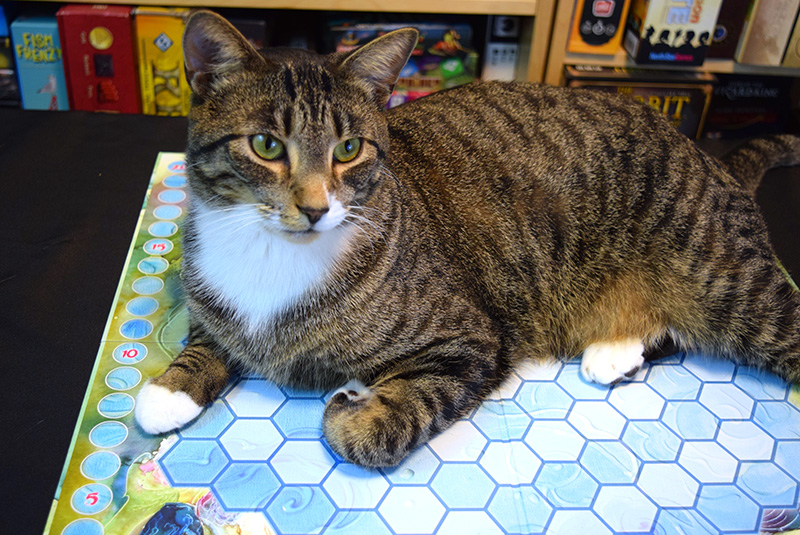 On the whole, we liked KOI.  The aesthetic at work here is fantastic – in particular the board itself is quite attractive, and the components are nicely presented.  The gameplay worked well at 2, with more players resulting in more contention and lower scores overall, but it also features a dedicated solo option as well.  So if competitive koi consumtion sounds like your kind of thing, and if you’re in the market for a light, beautiful strategy game, we recommend checking out KOI!

Recommendations based on KOI… 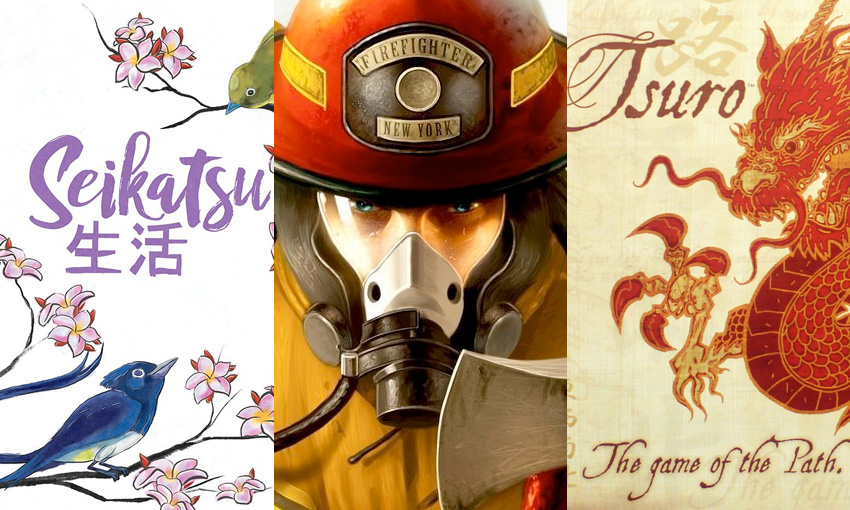 KOI features beautiful art, simple, engaging strategy, and programmatic movement.  If those are your thing, you might want to consider these other options: