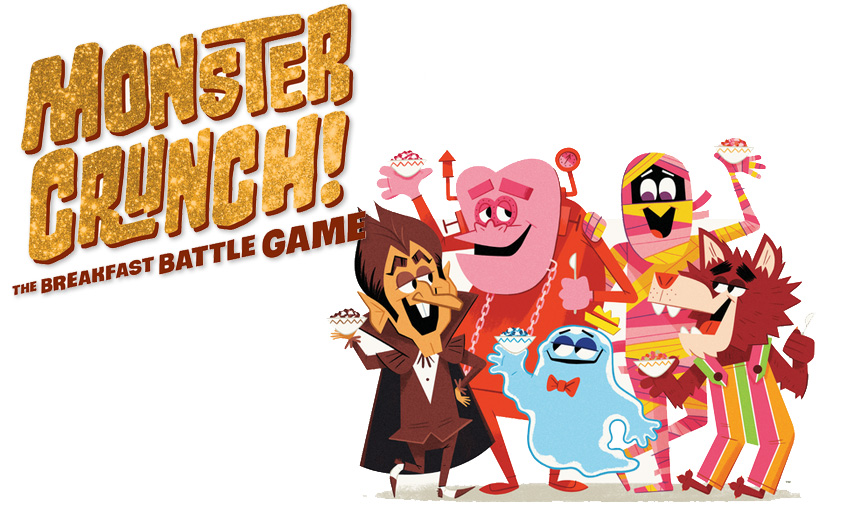 Monster Crunch! The Breakfast Battle Game was, frankly, a completely unexpected treat.  Uncomplicated without being thoughtless, this straightforward shedding game will be easy for gamers and nongamers alike to grasp, and its nostalgia-laced presentation will make it a sugary snack that will feed even more discerning palates.

So, to be honest, I don’t think it ever occurred to me that Monster Crunch! The Breakfast Battle Game was a game we, as a society needed.  Don’t get me wrong, I absolutely adore shedding/trick-taking card games, which so often hearken back to the feel of ‘classic’ card games (you know the kind, those ancient artifacts that could be played with a poker deck, and not some oddly-themed deck of triangular cards that came in an oversized box).  But you could forgive me a moment of confusion when Jess returned from Gencon this year brandishing what I genuinely thought, at first, was a box of cereal. 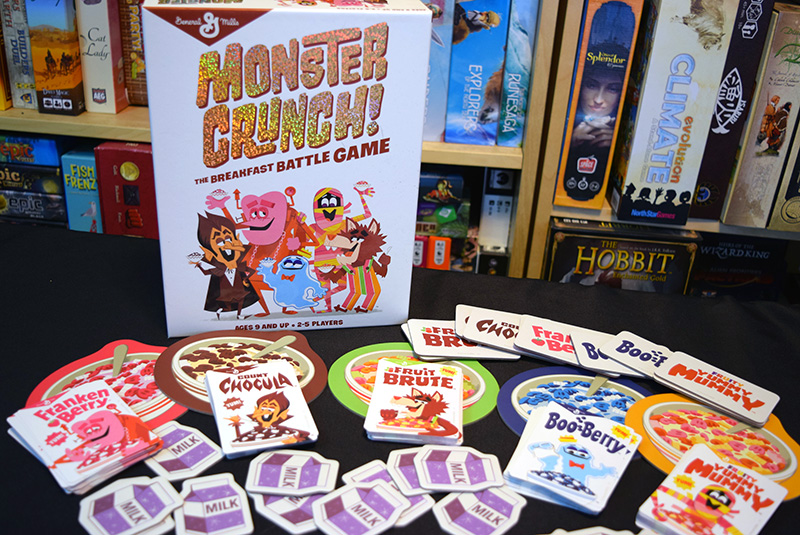 Jess: You think you were surprised?  Imagine how it felt to see a branded, licensed card game set in the world of monster breakfast cereals?

Andrew: You immediately thought it was awesome?

Despite appearances, Monster Crunch! The Breakfast Battle Game is actually a very classic-feeling card game – though it is wrapped in an odd, but honestly not at all unwelcome, theme, Monster Crunch! sits quite attractively on the table and features quick, easy-to-engage gameplay that’s lots of fun.  The premise is simple – as one of General Mills’ official mascots, your goal is to much as much of your delightfully sugary breakfast treat as you can manage.  Each player begins with an identical deck of cards, and the game is played out over the course of 3 hands (with multiple rounds per hand). 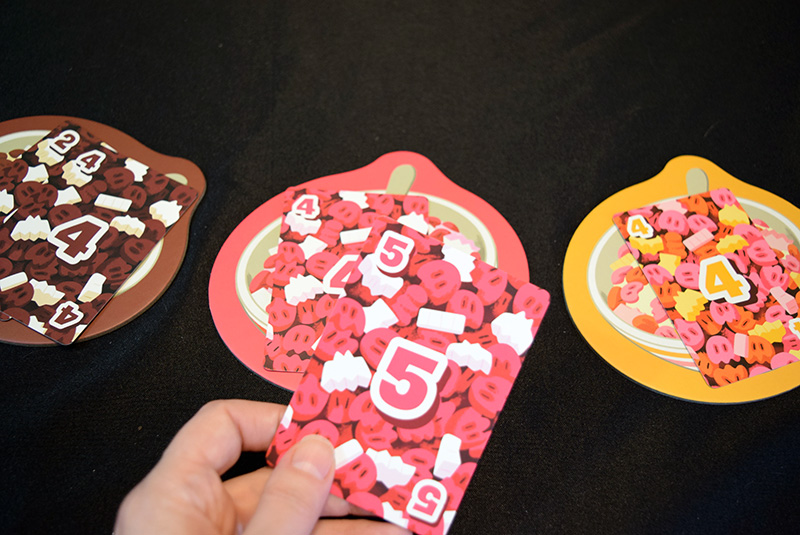 During each hand, players will play cards in ascending order to their bowls.  You can only play a card if you can meet or exceed the value of the card the last player added to their bowl.  If you can’t, you must pass, meaning you’re out for the round, but you get a milk as a consolation prize. 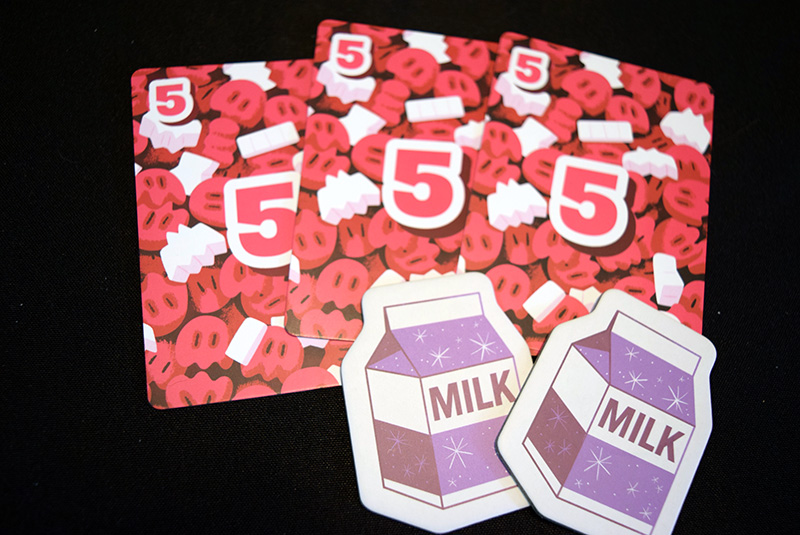 Andrew: Milk tokens are really where the strategy of Monster Crunch! shows up.  By spending a milk token when you play, you can add cards together, either in identical sets or in runs of ascending numbers.  These all get added together, making it possible to suddenly play huge values when needed, and getting cards into your score pile even faster! 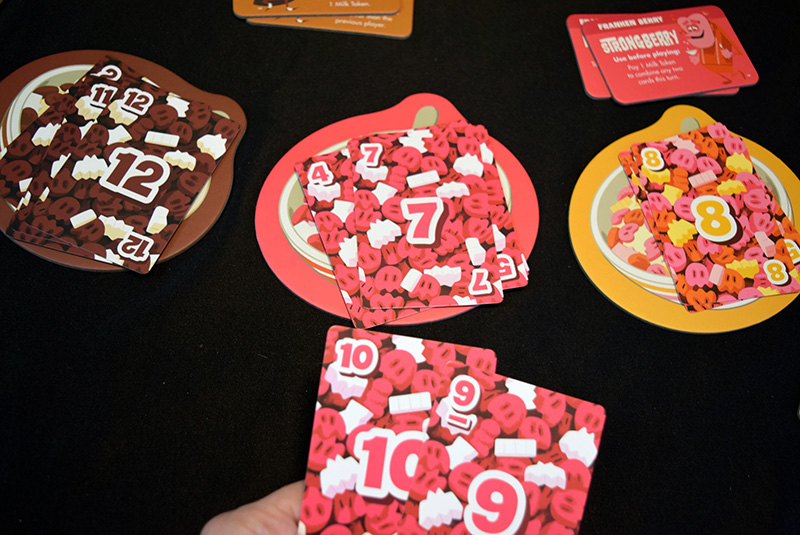 When all except one player passes, a new round starts, with the last player in able to play whatever card they want, and as soon as any player plays their last card, the hand ends.  Repeat this 3 times, and then all players count the number (not value) of cards in their scoring piles – the person who has managed to much the most cards is the winner!

Jess: So, like you said, Monster Crunch! is simple, but it’s not mindless – there isn’t deep strategy here, but there doesn’t need to be.  What we’ve got is a perfectly playable, delightfully presented card game that works really well!

Andrew: I totally agree.  I didn’t really know what to expect when I saw this one – though, to be honest, branded games do trend towards cheap cash-ins, so I didn’t have much hope.  But Monster Crunch! did more than beat my expectations – it kept us all perfectly well-entertained, and it’s clear that it’s going to be a perfect game for families, folks who are looking for light, easy card games, and cereal aficionados! 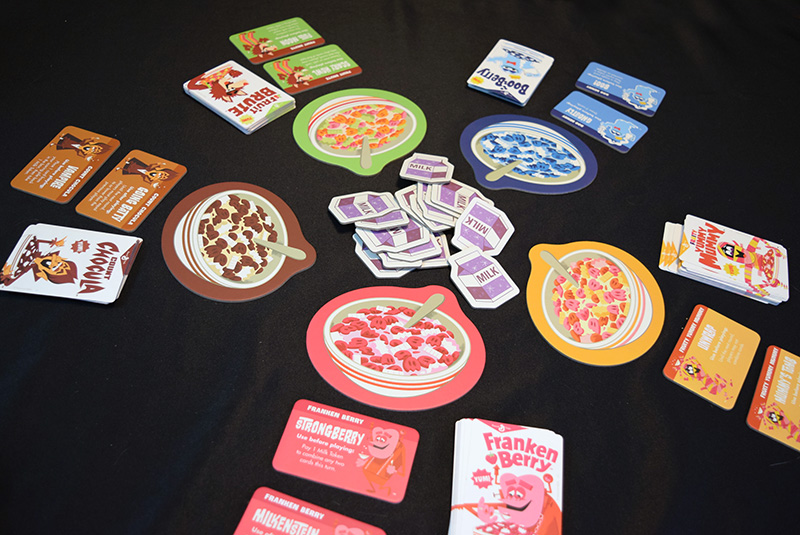 Adding to the simple strategy in Monster Crunch! is the fact that each mascot has two unique powers, making each otherwise-identical deck have a slightly unique feel.  None of the powers are particularly game-breaking, but they can provide for neat moments of strategy, adding just a touch of depth to the otherwise smooth experience of playing Monster Crunch! 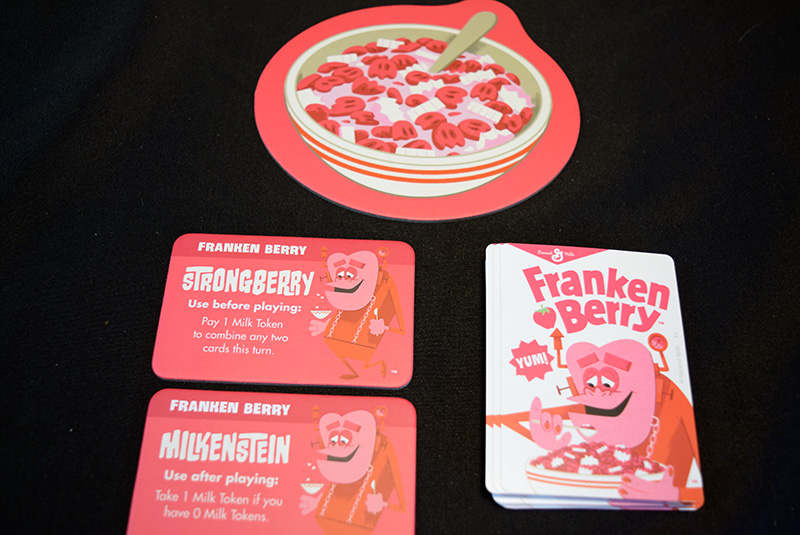 We were delightfully surprised at Monster Crunch! – for anyone who is charmed by the theme, engaged by the presentation, or looking for a very accessible, fun game to introduce to the whole family, Monster Crunch! The Breakfast Battle Game could easily become part of a balanced game table!

You can pick up a copy on Target’s site here

Recommendations based on Monster Crunch! The Breakfast Battle Game… 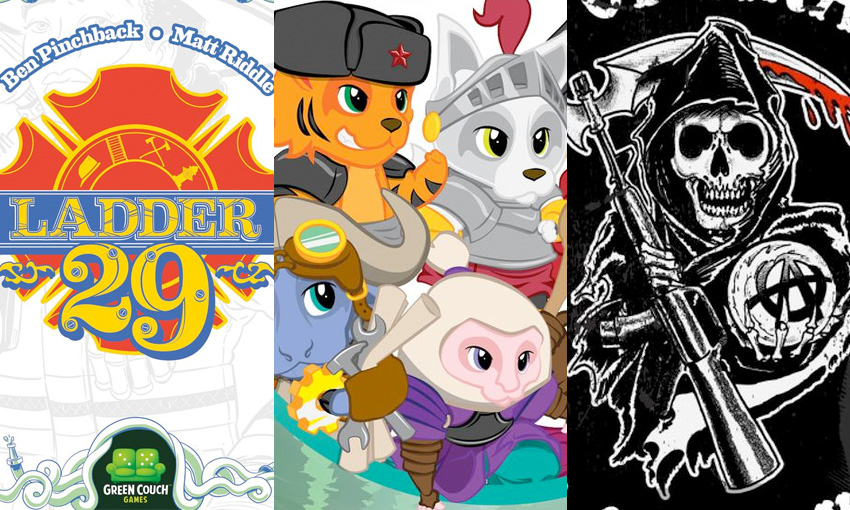