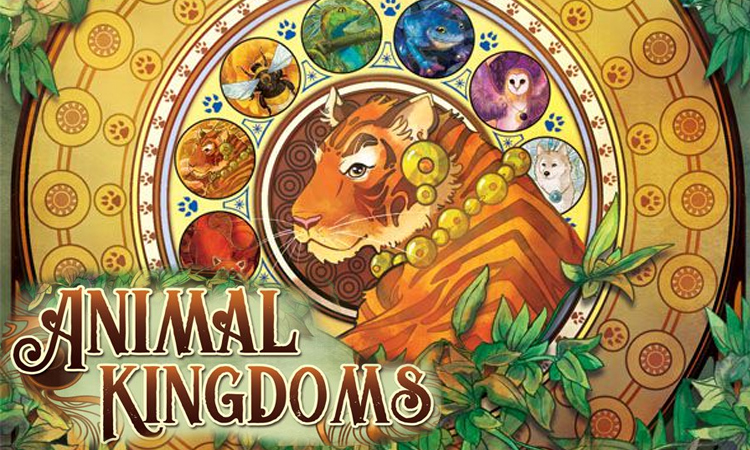 Animal Kingdoms is headed to Kickstarter with smooth, easy-to-engage gameplay and gorgeous artwork already in place.  The animal theme works as a beautiful delivery vehicle for a fun round-by-round hand management puzzle that we really enjoyed!

Animal Kingdoms, designed by veteran Steve Aramini, is the first game being published by Galactic Raptor Games (though Galactic Raptor is also comprised of industry vets, Carla Kopp and Dan Letzring).  In it, each player is looking to gain influence over the five kingdoms, and will do so by sending their ambassadors over the course of a series of rounds, looking to gain majority.

Jess: Actually, Animal Kingdoms is a mostly-abstract hand management/area influence game.  The whole animal theme is pasted on, and doesn’t affect gameplay at all.  But oh man, is it ever gorgeous!

Kickstarter Preview Alert! – Gorgeous or not, this preview is based on a (near finished) prototype copy of Animal Kingdoms, so everything is subject to change and some of our images came from the Kickstarter page.  We were not compensated for this preview, though we do reserve the right to request a finished copy of the game.

Animal Kingdoms is played over the course of 3 rounds.  During game setup, each of the five kingdoms is randomly dealt scoring tiles, and players will compete for area majority in each kingdom in order to claim these tiles (tiles are always claimed lowest value to highest). 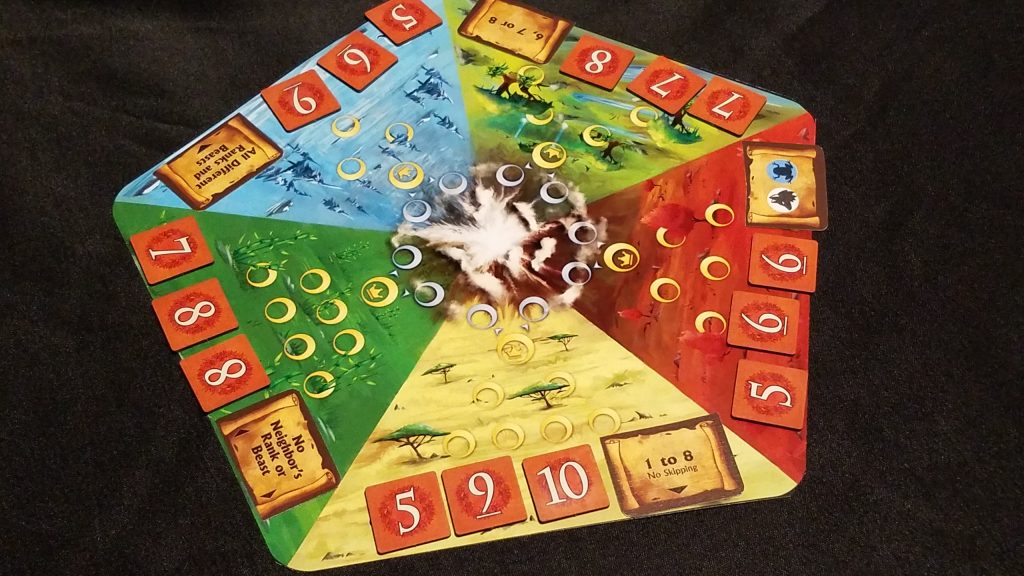 The method by which you will add your influence markers to the kingdoms is based on playing cards into those kingdoms, and in order to do so, you will have to obey the randomly-dealt ‘decree’ cards.  Each round, every kingdom will get a new decree, which dictates which cards can be played into it. 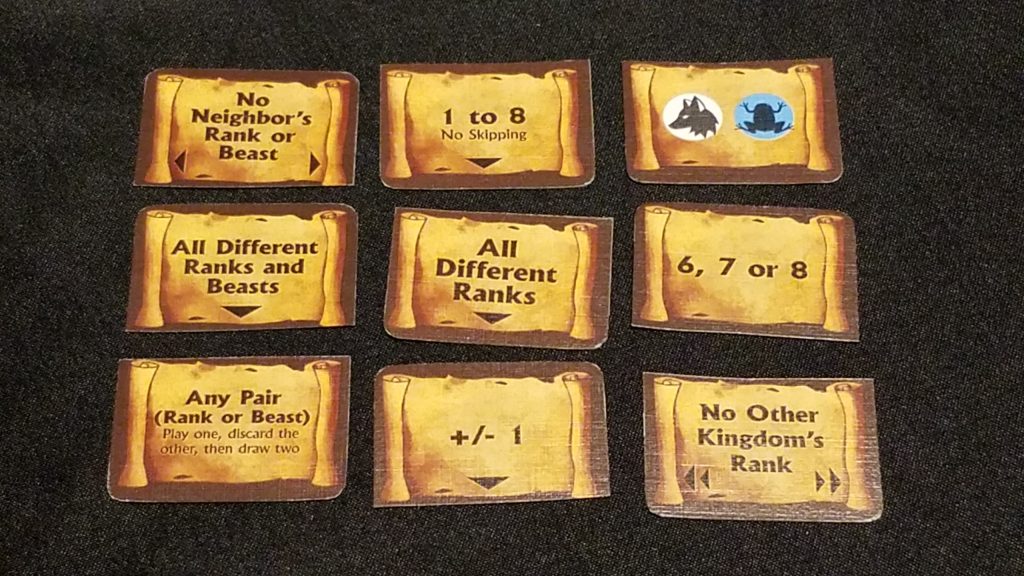 These restrictions might be quite simple (only specific suits, only even numbers, etc.), or they can be more dynamic, referring to the state of other kingdoms (only suits that have been played elsewhere, no numbers which were played into a neighboring kingdom, etc.).  With each card added, a player also gets to place one of their influence markers in that kingdom. 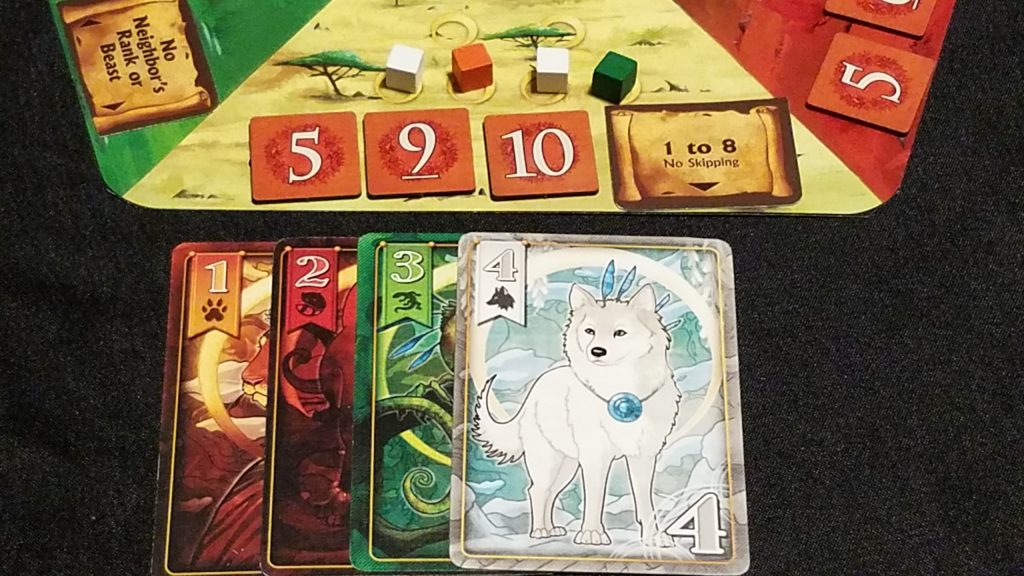 Each round proceeds until all players drop out for the round – the first to do so is given a random bonus scoring tile – and once all players are out, each kingdom is scored, influence markers are wiped (except for any that move to the permanent influence spaces), new decrees are dealt to each kingdom, and the process is repeated.  After the third round, the player with the most points is the victor!

Andrew: The decree cards form the backbone of Animal Kingdoms‘s strategy – it’s an engaging little round-by-round puzzle to see where you can play your cards most effectively, making sure that you’re adding your influence in a competitive way so that you can try and score that kingdom for the round.

Jess: Yep.  And you’ll also want to keep timing in mind – the player who adds the last marker to a kingdom for the round gets to permanently gain an influence in that kingdom for the rest of the game, making it easier to gain a foothold in later rounds.

Andrew: Absolutely, but you also have to keep in mind that the player who adds the last influence to a kingdom is forced to drop out of the round – that’s a real double-edged sword.  Adding the last cube means you get that permanent influence, as well as a bonus score token if you’re the first out for the round, but it does mean you’ll let your opponents run wild for the rest of the round.

Andrew: I have to say, I really enjoyed Animal Kingdoms.  I know we’ve mentioned how amazing the art is a few times, but I do think it bares repeating that even this prototype is absolutely beautiful, and I can’t wait to see what the finished game looks like.

Jess: Absolutely!  I also liked the way the different decrees made it so that there was no single winning strategy – this isn’t a game where you just always hope to have high cards, or a trump suit, or whatever.  Round to round, game to game, Animal Kingdoms will play out differently, and I love that! 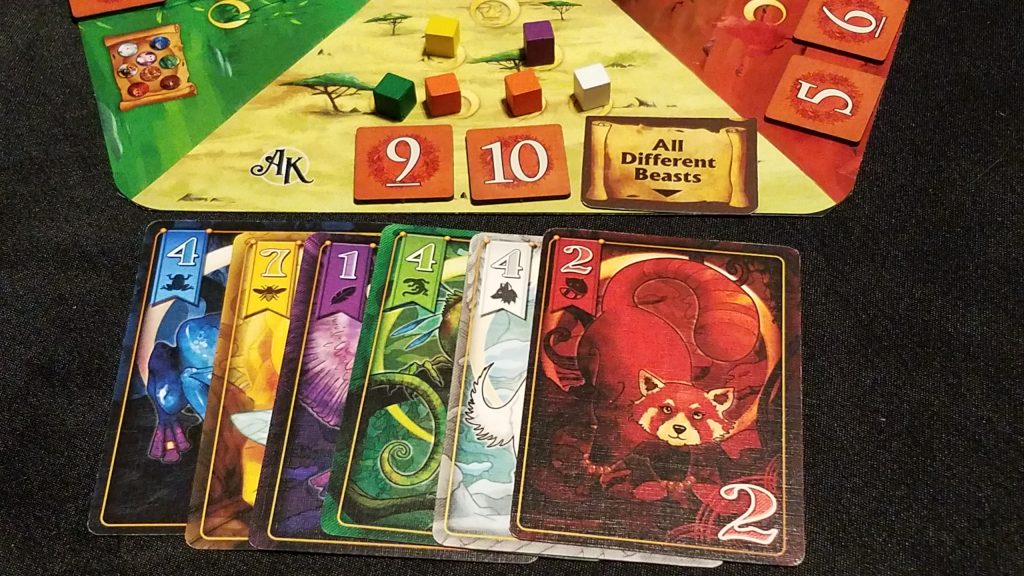 The gameplay feel in Animal Kingdoms doesn’t change substantially with different player counts.  With fewer players, there will obviously be more contention over majority and a higher likelihood of ties, which can lead to some minor frustration because of the way these ties are resolved.

Ties for first place in a round are resolved by all tied players simultaneously playing a card from their hand.  Whomever plays the highest card wins – if there is still a tie, players keep playing cards from their hand until either they run out or the tie is broken.  Ties for second or third place are friendly, with all tied players getting the same points.

Jess: This tie-breaking mechanism is a little odd – it suddenly favors players who end the round with big cards in hand, which goes against what I just said about how Animal Kingdoms doesn’t make you favor a specific kind of card by default.  But that’s a small nit-pick.

Andrew: Yeah, I didn’t love the random-feeling ‘card battle’ tiebreaker either.  It’s exactly the sort of thing that a small expansion could address.  It’s a small, odd criticism of what is otherwise a really solid game, and it didn’t detract from my experience in any significant way.

Quibbles over tiebreakers aside, we had a great time with Animal Kingdoms.  It’s gorgeous, easy to engage, fun to play, clever in its design, and packed with replayability.  This one’s a winner, and we definitely suggest you checking out the Animal Kingdoms Kickstarter today!