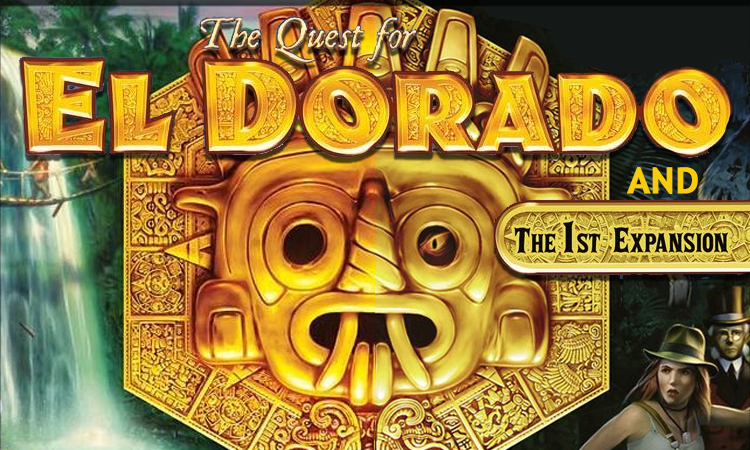 The Quest for El Dorado is a fantastic entry level deck building/racing hybrid that stays engaging long after its first play.  And with Heroes & Hexes, there's even more player interaction and complexity to keep the game fresh!

Recently, we did a Game in a Minute featuring The Quest for El Dorado, so there’s no point in burying the lede here: The Quest for El Dorado is one of my new favorite ways of introducing people to the concept of deck building games, and it’s a fun game besides!  This deck building/racing hybrid does lots of little things oh so right, so let’s dive into why it earned a place on my (admittedly) very packed shelves. 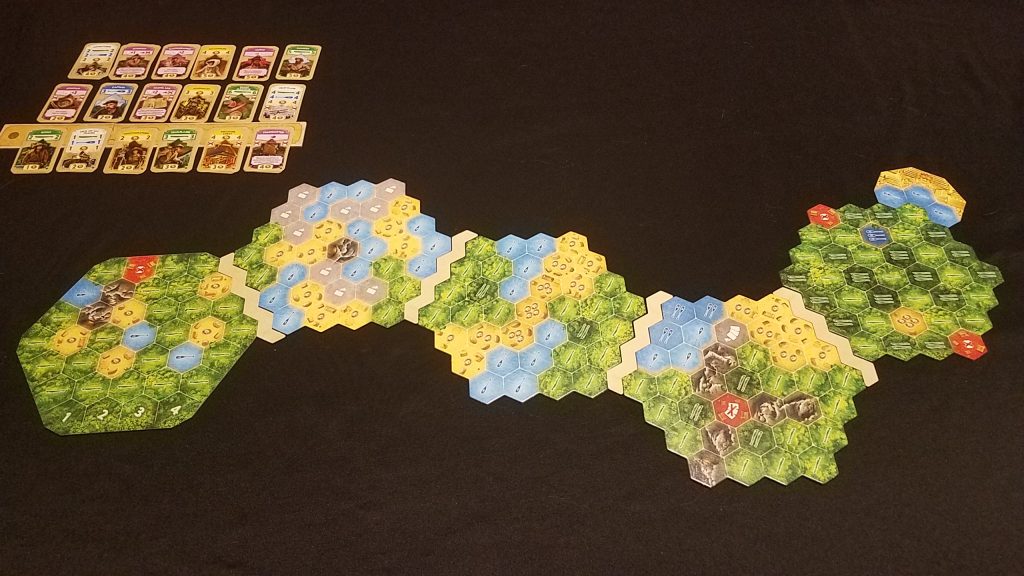 Andrew: Agreed.  But I feel like it stays fun after the ‘gateway’ phase – I know I’m always happy to give it a play.

The Quest for El Dorado is, first and foremost, a race.  The players are all working to get their explorer from the starting location to the titular city of El Dorado, and they will do so by moving across a variety of challenging terrain, from jungle, to river rapids, to caves, and even outpost and towns.  First one to the legendary city of gold wins! 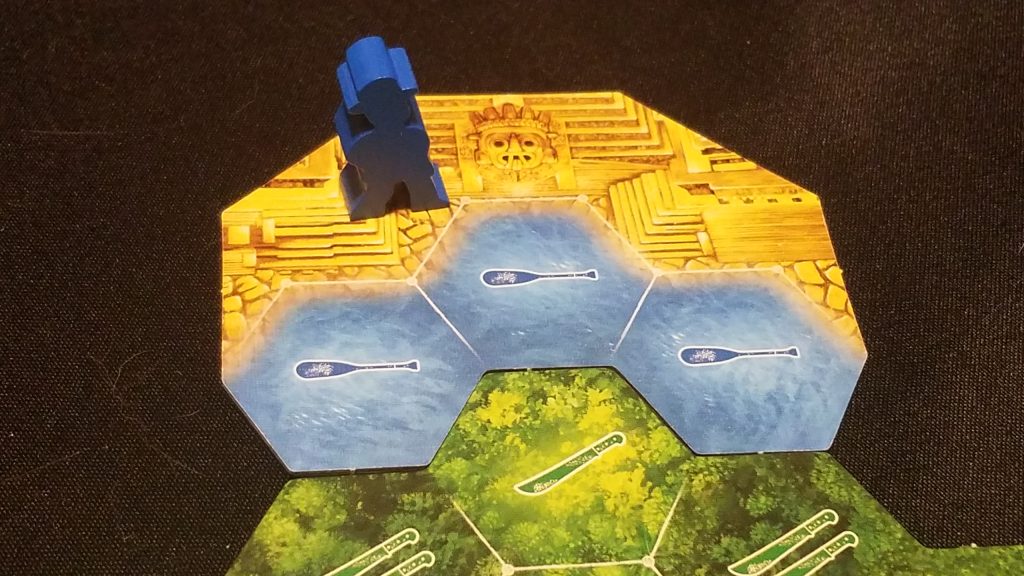 Each explorer begins with an identical deck of cards, each of which lets them move over a particular terrain type.  The modular and highly-customizable board clearly illustrates what the cost is to move your meeple from one hex to another, and you will do so by playing cards from your hand that meet or exceed the requirement. 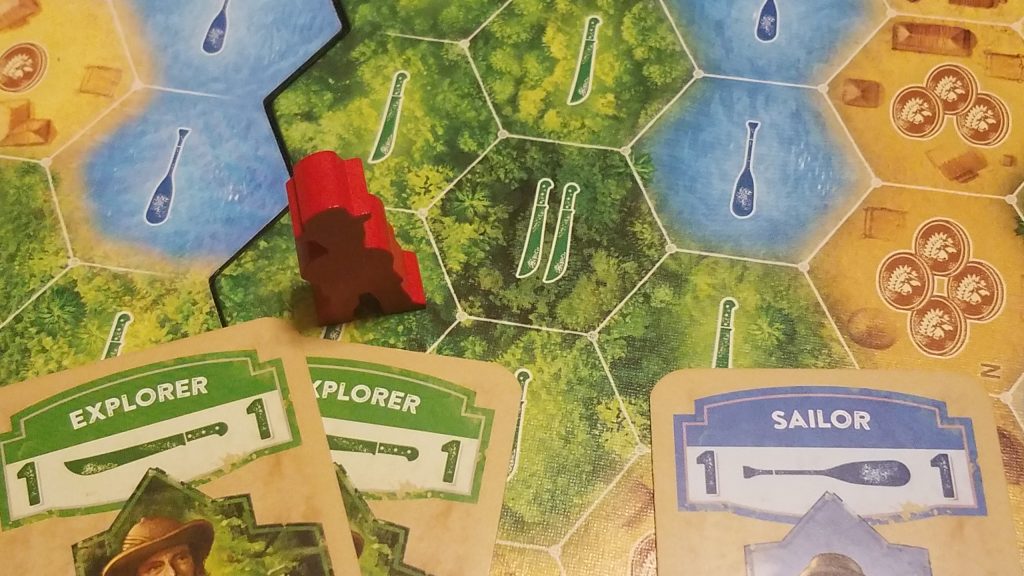 Each turn, players manage their hand of 4 cards, strategically moving across the map as quickly as possible.  That strategy probably includes cutting off your rivals (players can’t move through each other), as well as upgrading the cards in your deck. 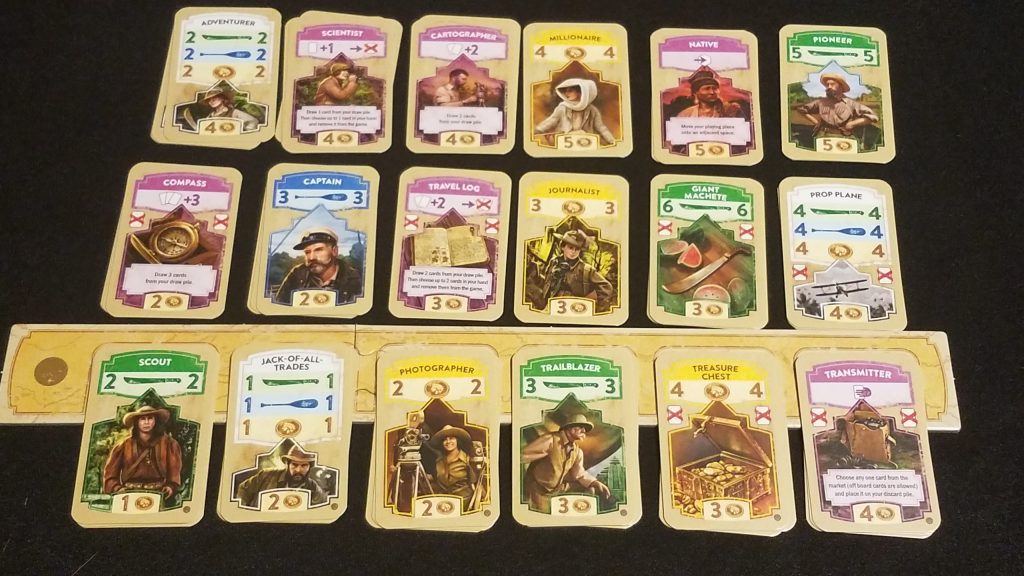 Andrew: Getting blocked can be agonizing!  But since it’s a race, players are obligated to keep moving, so the situation often corrects itself. 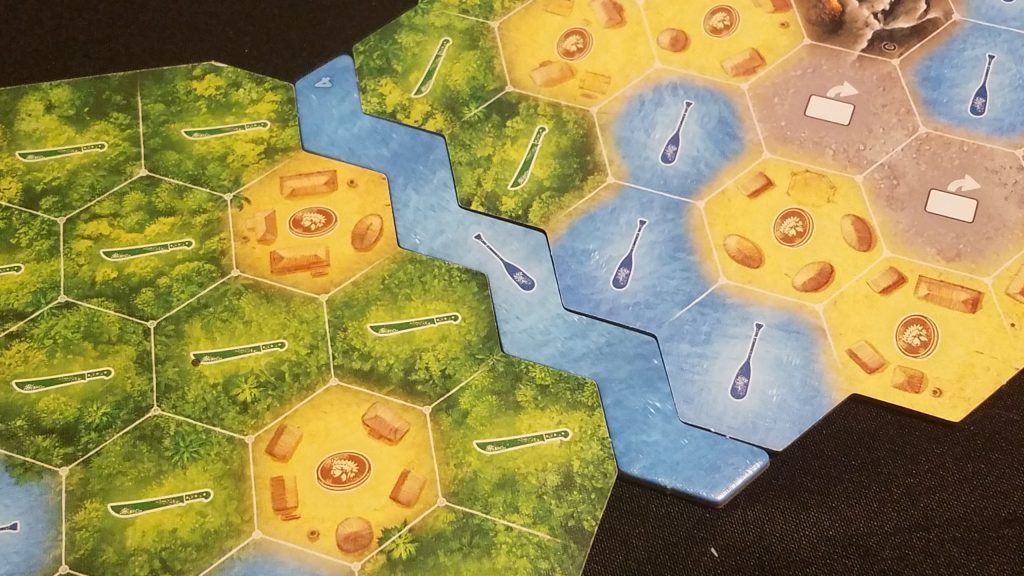 Instead of spending cards for movement, players can instead spend them to purchase cards from the market.  All purchasable cards are better than your starting hand, some significantly so, and a lot of the skill of The Quest for El Dorado comes from populating your deck with the cards that will let you move into dominant positions on the board. 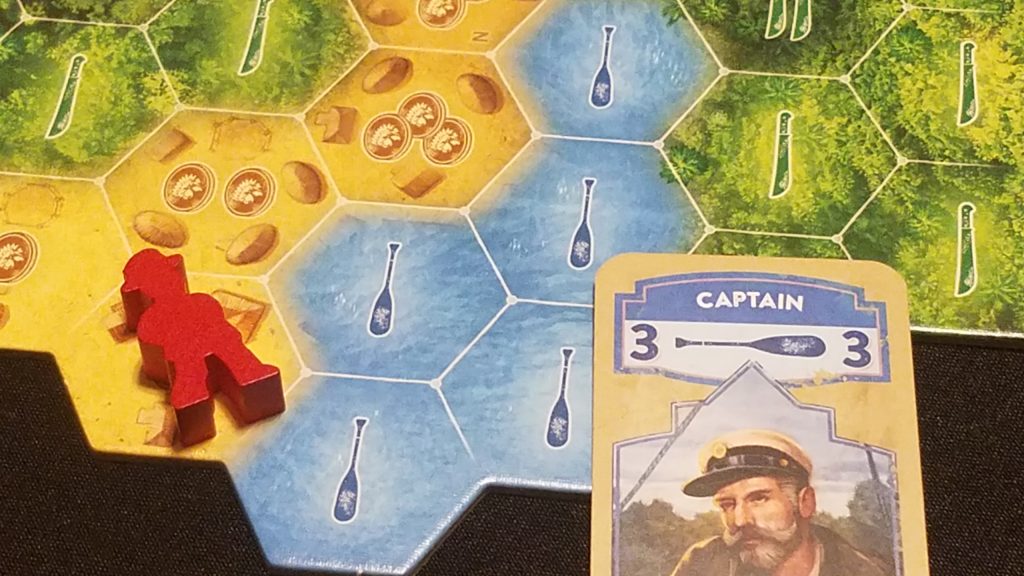 Jess: Adding the right cards to your deck is critical!  There are relatively few opportunities to trash cards (aside from the one-time-use cards), so every addition needs to be considered.

Andrew: But not, like, agonized over.  The Quest for El Dorado is smart in that you can always use 2 random cards for 1 coin when purchasing, so even if a card isn’t immediately useful, it can at least be turned into cash for you to use on other, possibly better cards. 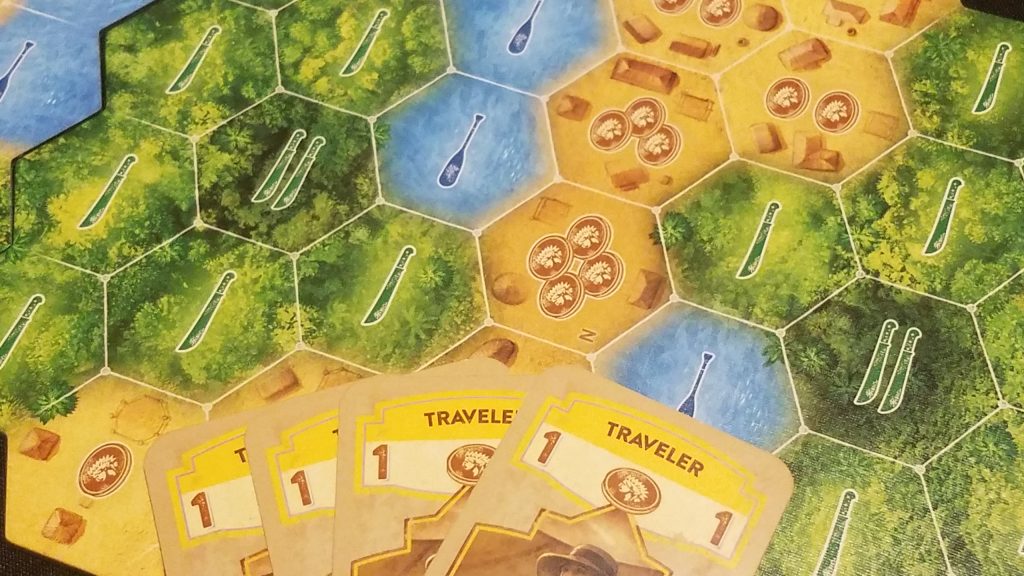 As stacks of market cards get depleted, they are replaced by new purchase options.  But intriguingly, it is the player who buys the last card of a pile who gets to decide what stack replaces it.  Strategy! 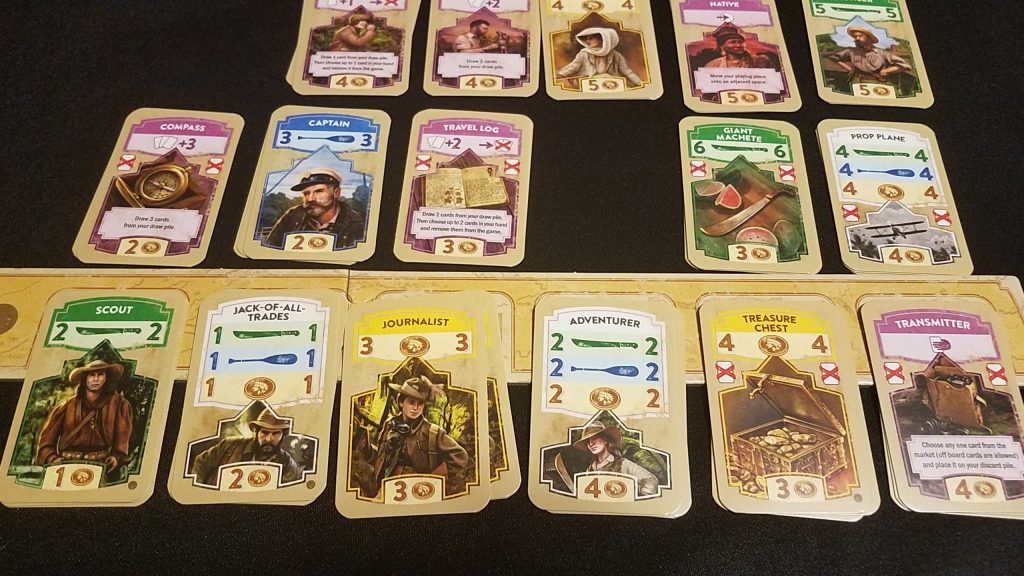 The Quest for El Dorado comes with an in-box module, the ‘caves variant’, that adds some variety to the game.  When playing with Caves, each Mountain hex (which is impassable) will have a stack of 4 random cave tokens placed on them.  Each time a player ends their turn by moving adjacent to the cave, they will take the top tile for themselves.

Each of these tiles give the player who claims it a 1-time benefit, like providing some movement points, letting you trash cards from your hand, or even moving through your opponents for a single turn! 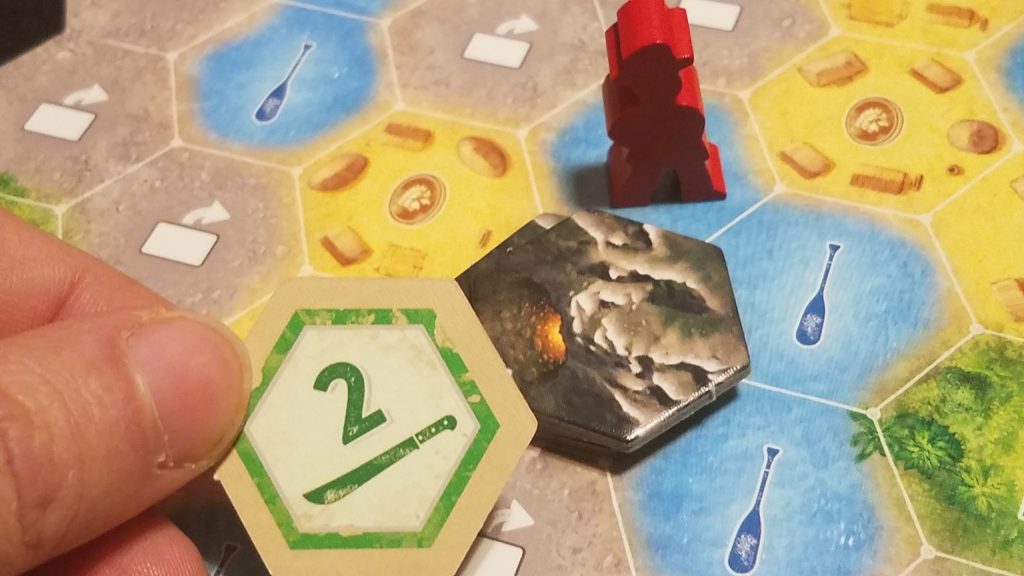 Andrew: As far as I’m concerned, there’s no real reason to play without this ‘variant’.  It adds a little spice that I really appreciate.

Jess: Same!  And it makes it suck a little less when you get pinned between a mountain and an opponent – at least you might get a useful tile! 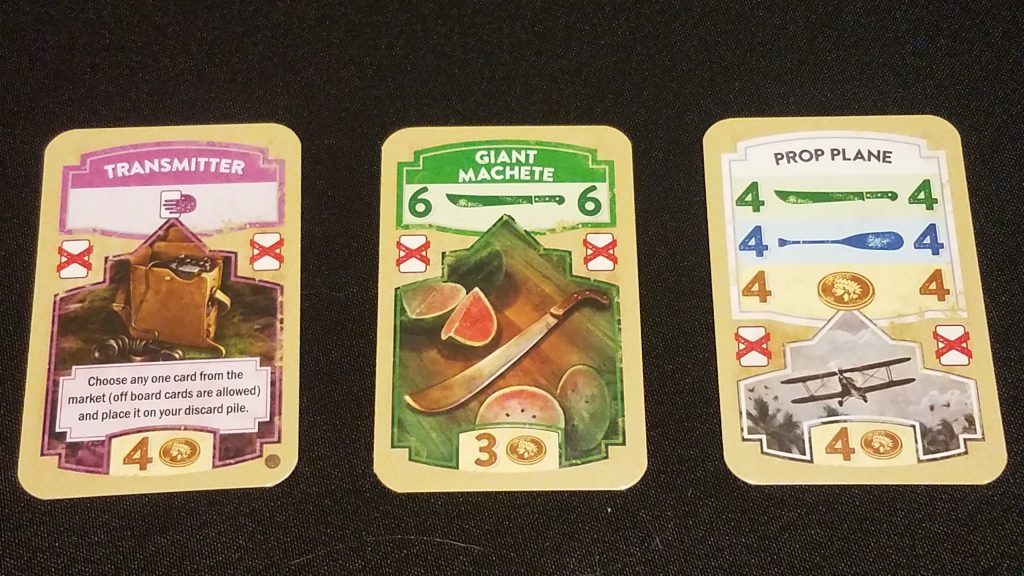 Gameosity wholeheartedly recommends The Quest for El Dorado – what we have on our hands is a beautifully made game with a rock-solid mechanical core that’s accessible enough for new or younger players but still engaging enough to keep the rest of us entertained.  It’s tight, focused game design that results in a really fun experience overall! 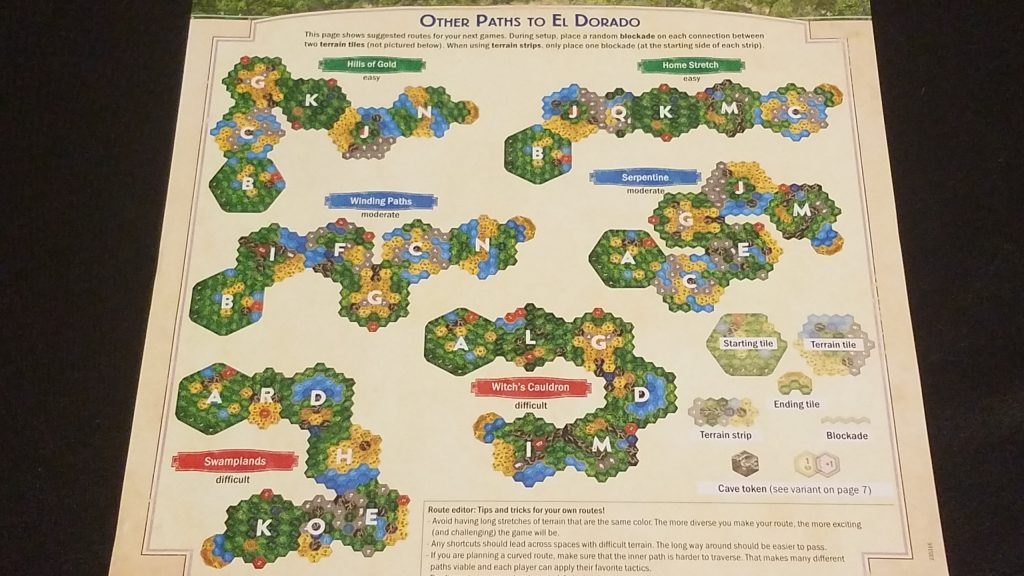 Jess: …But what could make that experience even better?

Fresh off the presses, Heroes & Hexes is the first expansion for The Quest for El Dorado.  For those looking to expand the base game and add some more variety, it hits on all cylinders.  First and foremost, you will always play with the caves variant when you add Heroes & Hexes (yay!).  In addition, Heroes & Hexes adds the following: 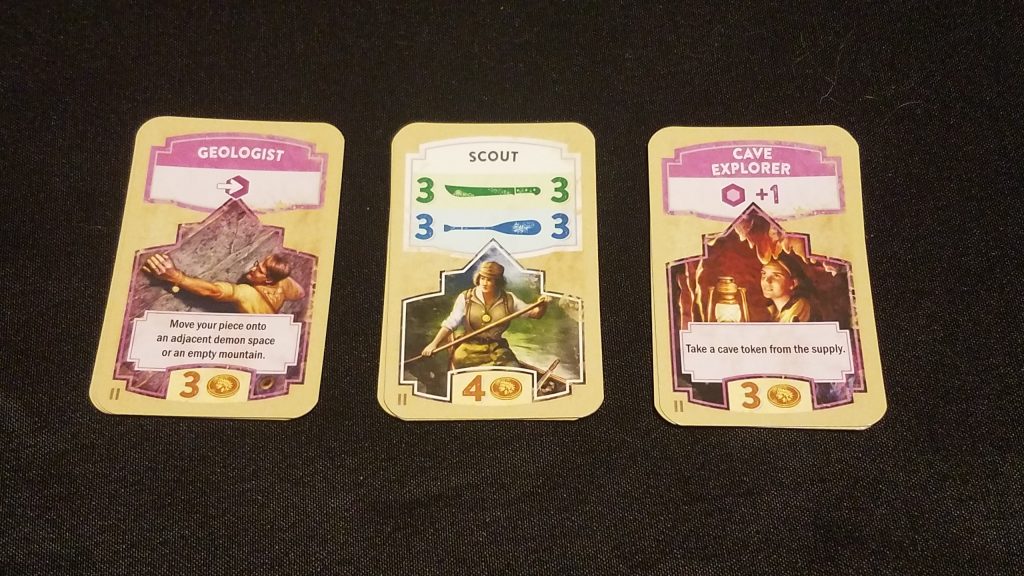 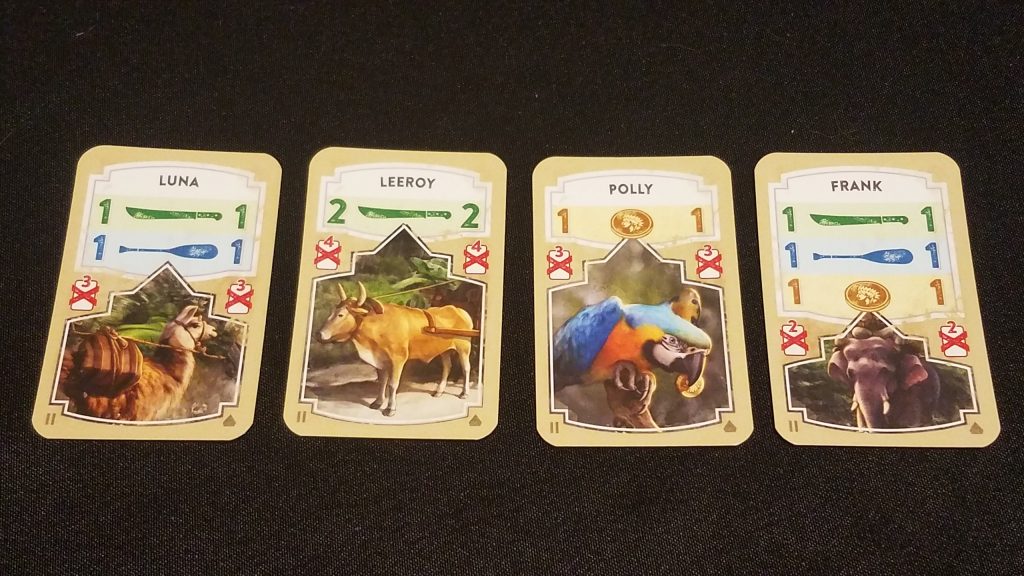 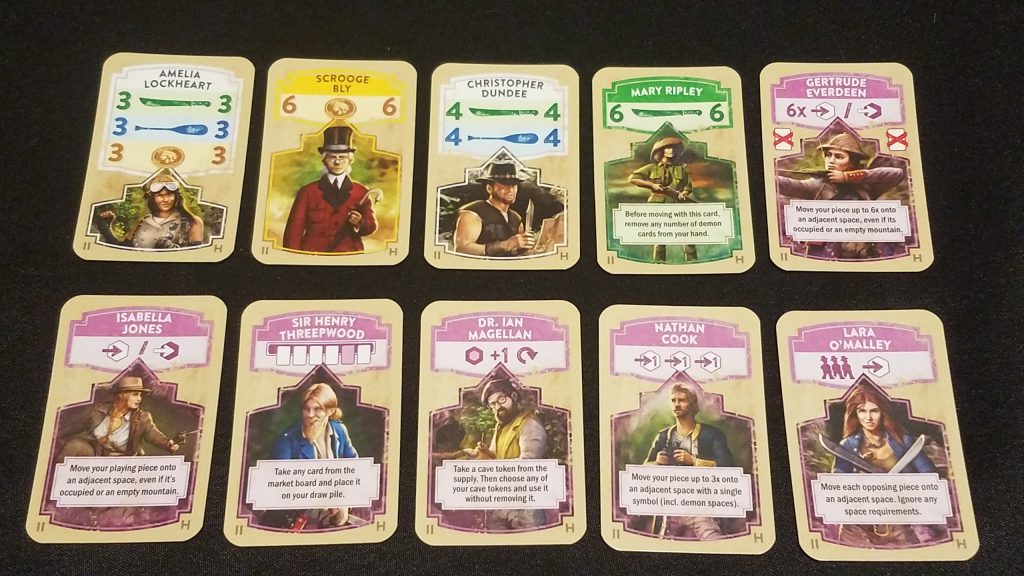 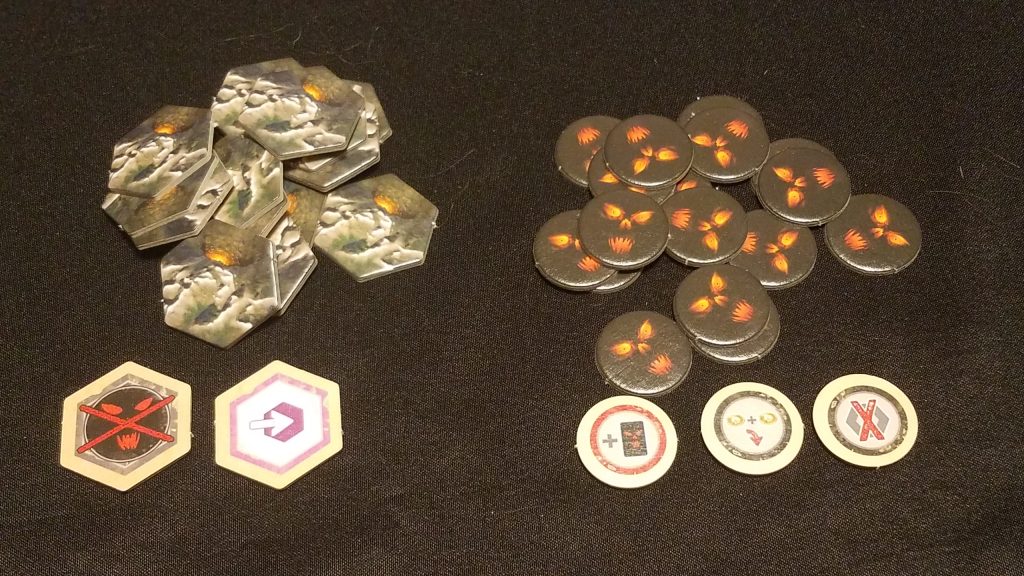 Heroes & Hexes also adds new terrain tiles to the game, greatly increasing the variety of maps you can race through! 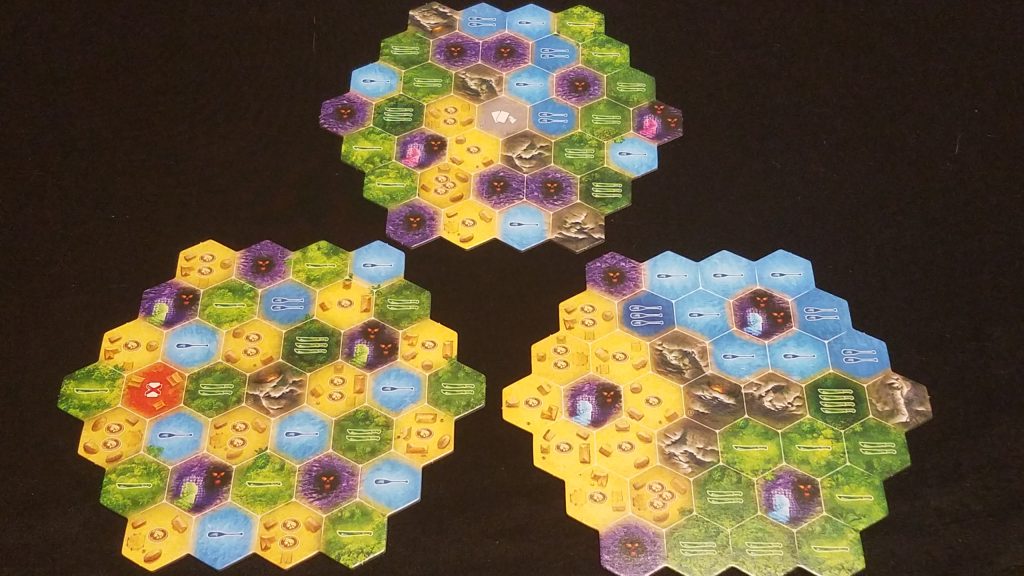 Andrew: Like I said, more stuff!  I love what Heroes & Hexes adds to The Quest for El Dorado.  The base game is sublime in its simplicity, but I’m glad to see that there are more options that you can fold into your experience, if that’s what you want!

Jess: Absolutely!  Heroes & Hexes is the sort of expansion that I’ll probably always recommend, unless we’re dealing with very new players, in which case it’s simple enough to set aside.  And you can even introduce the new elements in modular form – want to add familiars but leave out the rest?  No problem!  BRING ME THAT ALPACA!