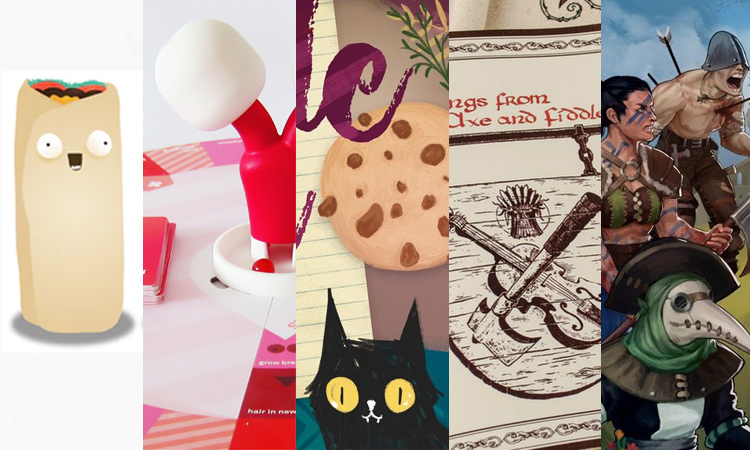 There are times where I sit down to peruse Kickstarter and think to myself “Have I seen it all? Are there no new ideas out there? How many more viking/zombie/medieval/city-building games can there be?” and then the universe answers with something like Throw Throw Burrito. I could have never anticipated a game where you try to trying to collect sets of cards while throwing burritos around in a Mexican munchie melee. 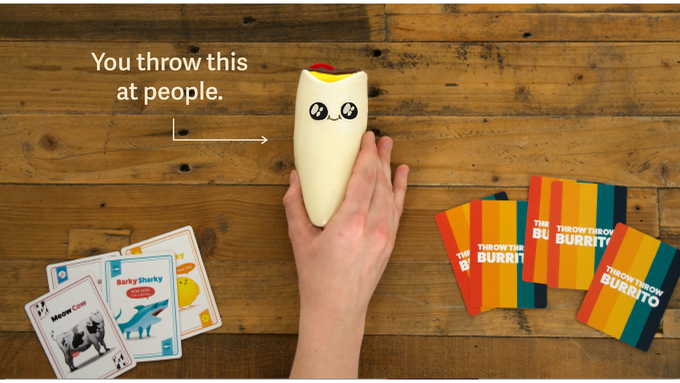 Once again The Oatmeal has created  a simple and bizarre game that is crushing it as far as Kickstarter goes and why shouldn’t it with that adorable stuffed burrito? The game is easy to learn. You place two burritos on the table and collect sets of three cards. You can play burrito cards to begin a tasty battle of burrito chucking.

There are a few different styles of fights including 1 on 1, all out war between everyone who is playing, and even a classic duel where players stand back to back, walk a few paces, and see who can wing a burrito at their opponent the fastest. Get hit with a flying foodstuff and you’ll lose points, so watch your back and warm up your throwing arm. The game promises to be ridiculous, energetic, and minimally dangerous. Go see what all the fuss is about on the Throw Throw Burrito Kickstarter campaign here. 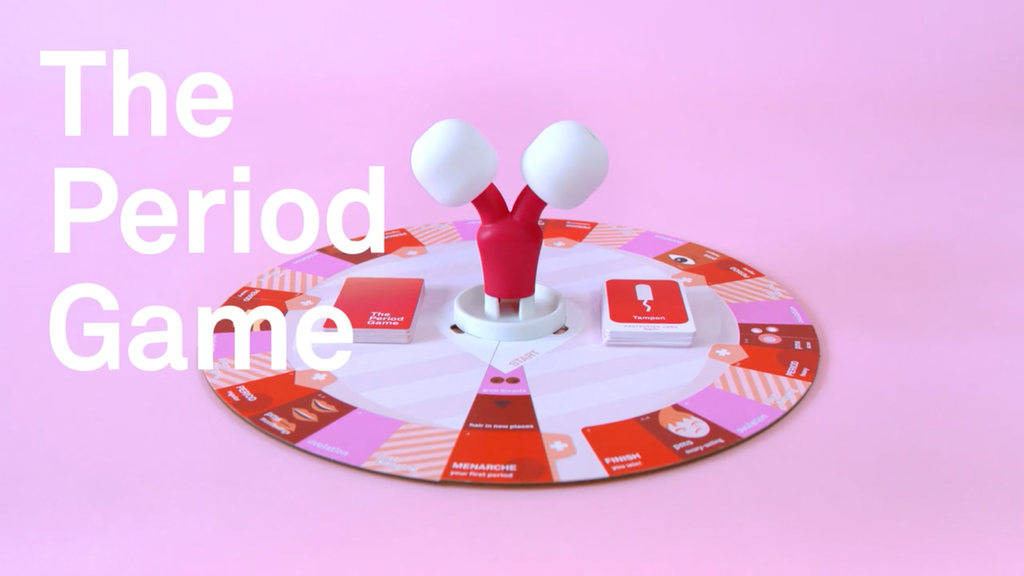 Ok, this one is also pretty original but hang on. I am about to get weirdly serious for a second. Please stay with me.

I hate talking about my period. I feel judged and ashamed for getting something something that is a natural part of my biology and that’s pretty messed up. I don’t know if a board game can circumvent those sorts of feelings since a lot of what influenced my views comes from the media and social norms, but seriously, if we can educate kids on menstruation in a fun, safe way, then let’s freaking do it! 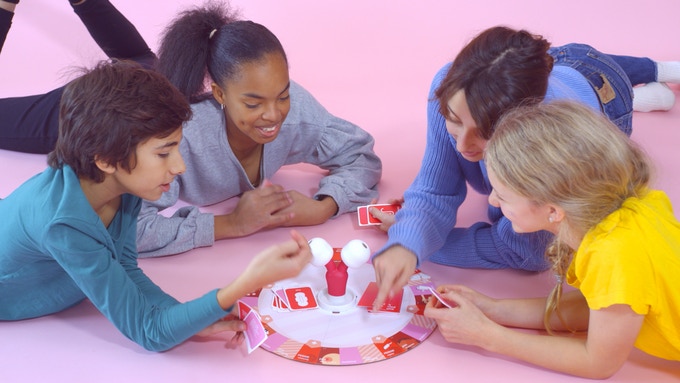 Designers Daniela Gilsanz and Ryan Murphy have worked for years to create an award winning design that teaching kids of all ages and sexes about periods. If you are a parent, educator, or just curious go check out this game. It may seem silly, but I really think that teaching kids through fun activities like board games makes an impact and if it helps even a few feel less shame about their bodies or keep them from making fun of others when they get their periods, then it is well worth it. You can learn more about The Period Game here on Kickstarter. 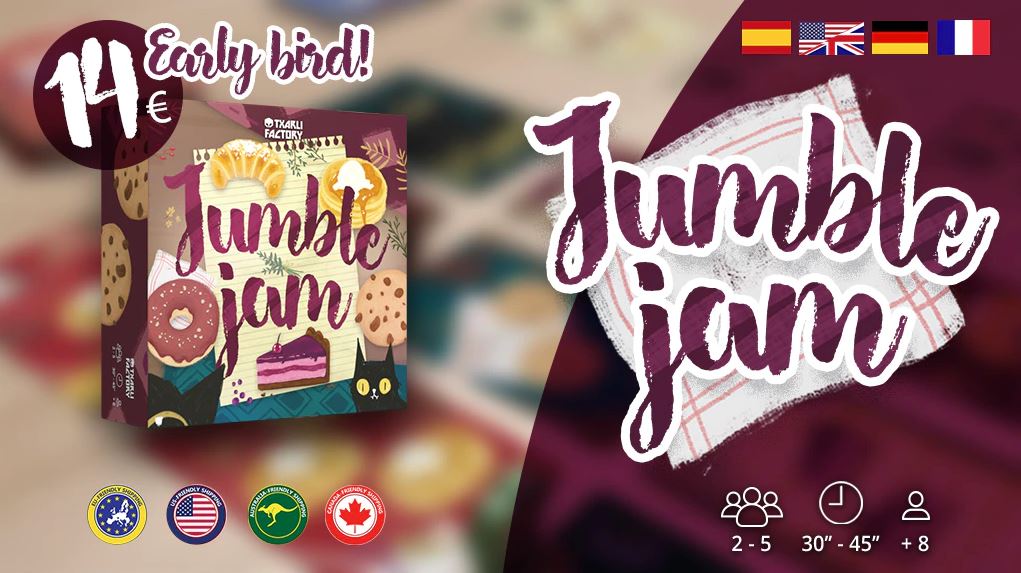 The name Jumble Jam rolls off the tongue in such a delightful way that I just want to wander around saying “Jumble Jam” all day. I am, in fact,  a bit peculiar, but come on, say it with me… Jumble Jam. Yeah that’s right.

Ok, enough nonsense, what is Jumble Jam (hee hee) about? Well in the game you play the employees of Grandma’s bakery who are all looking to impress granny and become her favorite grandchild (Yes, grandma employs her grandchildren. She has no time for your child labor laws).

To gain Grandma’s love you must fill as many orders as you can and rake in that sweet, sweet cash (Grandma has Bingo to get to). Waste any pastries and they’re coming out of your pay, so manage your baked goods carefully! The player that has the most coins at the end of the game wins grandma’s affections and the game. Brilliantly illustrated and featuring a grandmother with dubious motives, Jumble Jam (hee hee) sounds like my kind of… jam. I’m not proud of that. Get a taste of Jumble Jam on Kickstarter here.

Fall of Magic: Songs from the Axe and Fiddle 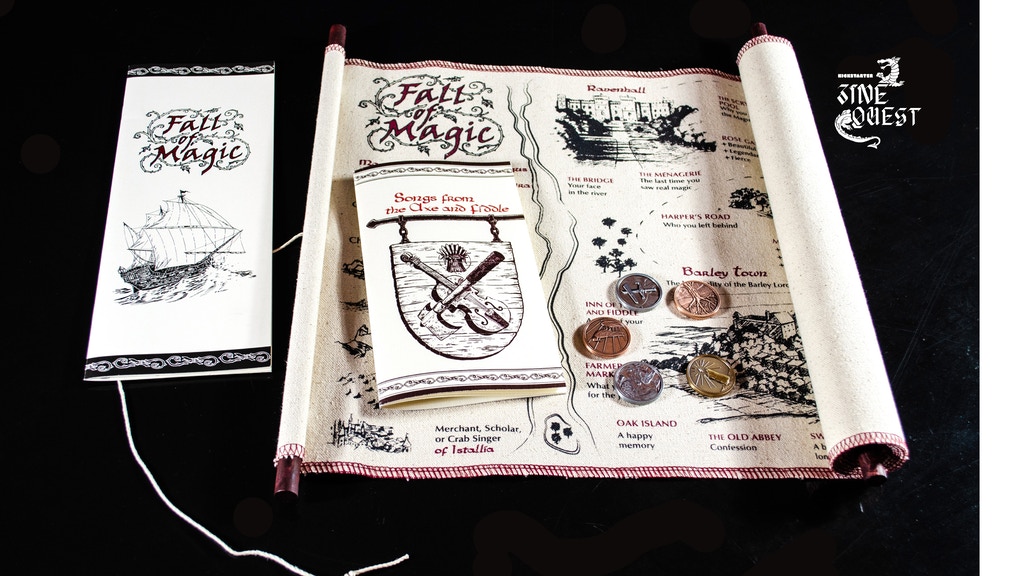 Fall of Magic is one of those games that is gorgeously luxe and the quality of the components speaks to the game’s theme. As a tabletop roleplaying game, Fall of Magic takes players on a journey across a fantasy world full of magic and adventure. It’s played  on a hand-made, screen-printed scroll that’s over 5’ in length and a real showpiece. This newest expansion, Songs from the Axe and Fiddle, are a collection of modules that add new rules and stories to explore. 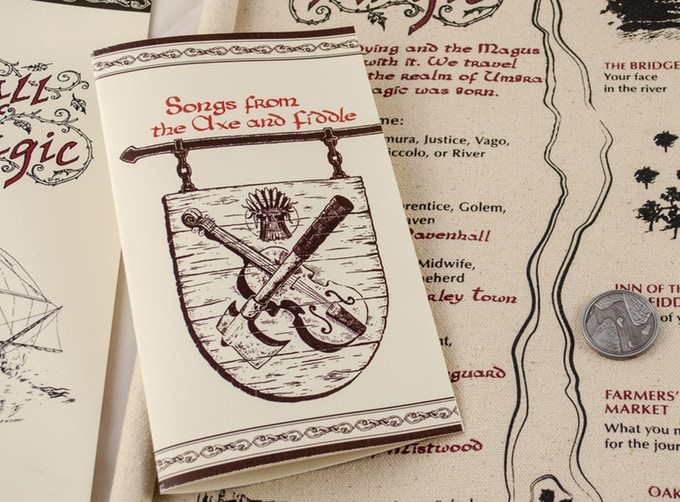 Songs from the Axe and Fiddle will be printed as zines with screen-printed art with a linen finish and will fit inside of the Fall of Magic box. If you’ve never picked up a copy of the base came and are intrigued, you can get a copy as part of the campaign. I’ve always been curious about this RPG it makes me think it would be easy to stay immersed in the world since the actual components feel like something straight out of a fantasy story. You can learn more about Fall of Magic: Songs from the Axe and Fiddle on Kickstarter here. 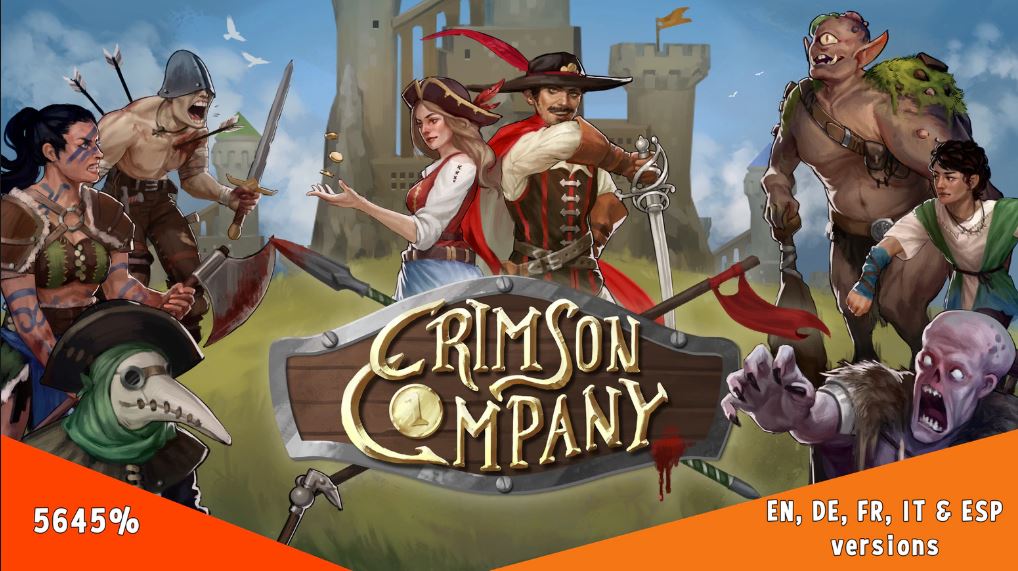 This one’s short and sweet: Crimson Company is a 2 player card-drafting game where you fight for control over three of the kingdom’s castles. To claim dominion over a castle, you must assemble a team of colorful mercenaries that can outdo your opponents team.

Crimson Company is interesting as both players are drawing from the same deck and the same selection of mercenaries, so its less luck based and more about your strategy. I like that the game is only around 20 minutes long, so it sounds like it is easy to pick up and play a quick game wherever you go. Visit the Crimson Company campaign to learn more.