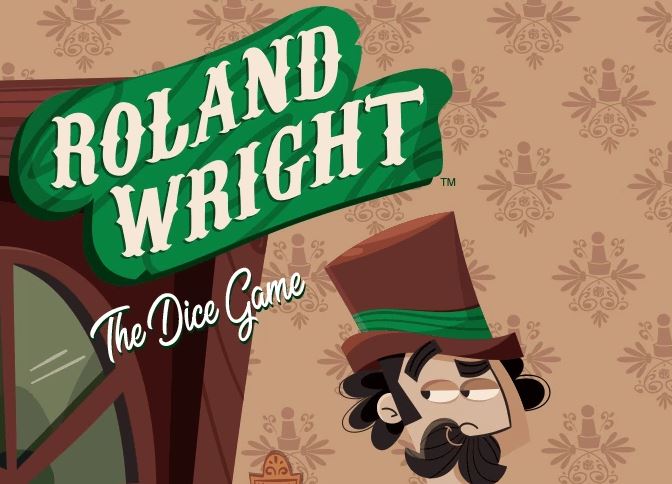 Roland Wright: The Dice Game is a great-looking addition to the roll & write genre, bringing a few clever mechanical twists to what is otherwise a well-worn formula.

Roland Wright: The Dice Game is the newest game up on Kickstarter from Perplext, the folks behind the Pack o Games line of tiny card games.  However, while Roland Wright: The Dice Game isn’t at all a heavy game, it’s assuredly the biggest, most ambitious design from Chris Handy – this roll and write game features a few unique twists that are cleverly innovative, and fantastic art to boot!

Kickstarter Preview Alert! – This article is based on a prototype sent to us by Perplext.  All artwork and images subject to change, and some of them are from the Roland Wright: The Dice Game Kickstarter campaign.  Gameosity reserves the right to request a final version of the game, but we were not otherwise compensated.

In Roland Wright: The Dice Game, each player is an aspiring game designer, who intends to make their dice game the best it can possibly be, by adding as many sources of design greatness as possible.  You’ll develop your game over a series of rounds, adding and removing components as you iterate on your concept.

Jess: You’ll do all this, obviously, with dots!

Andrew: Technically, they’re ‘bits’, as in game bits?  But yeah, the theme falls away pretty fast, in the face of the abstract nature of Roland Wright: The Dice Game’s gameplay.

Jess: That didn’t trouble me any, but even with Roland Wright: The Dice Game’s fantastic art and presentation, what we have here is an abstract game, and the theme (while neat) doesn’t really mean much of anything.

Each turn in Roland Wright: The Dice Game follows this formula:  The lead player will roll all the dice, separating them by color, creating pools of ‘bits’ to be added to player boards using colored markers.  The lead player will then select one color for their exclusive use, and the rest of the players will have access to the rest.  Then, each player adds as many bits of one color as they want to their ‘bit box’ (player board), up to the number of that color rolled that turn.

Jess: Where and why you’d add bits is driven by a bunch of different goals you’re working toward simultaneously!  There are lots of little ways of scoring points in Roland Wright: The Dice Game, and all of them are all about building patterns of bits in your box. 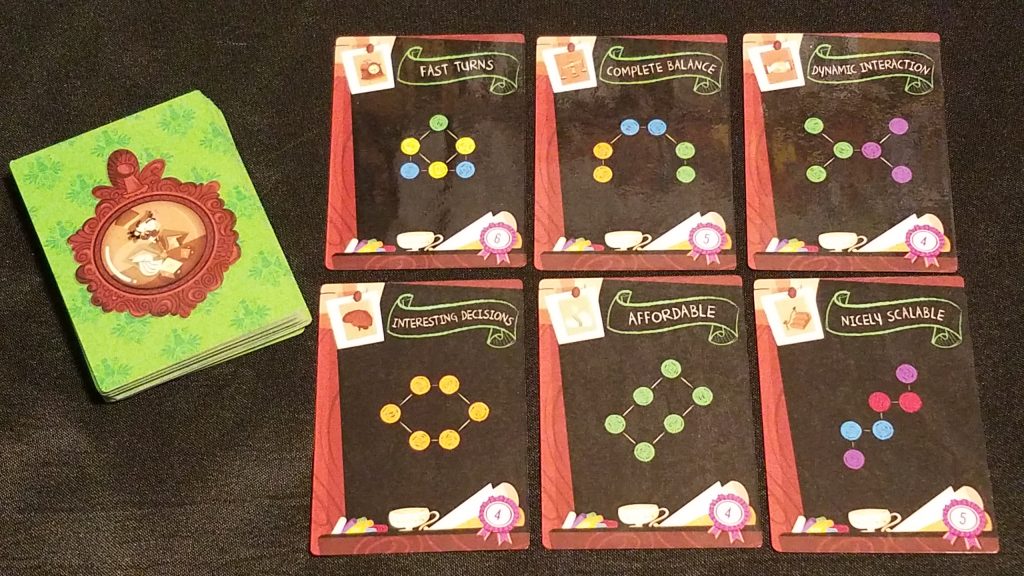 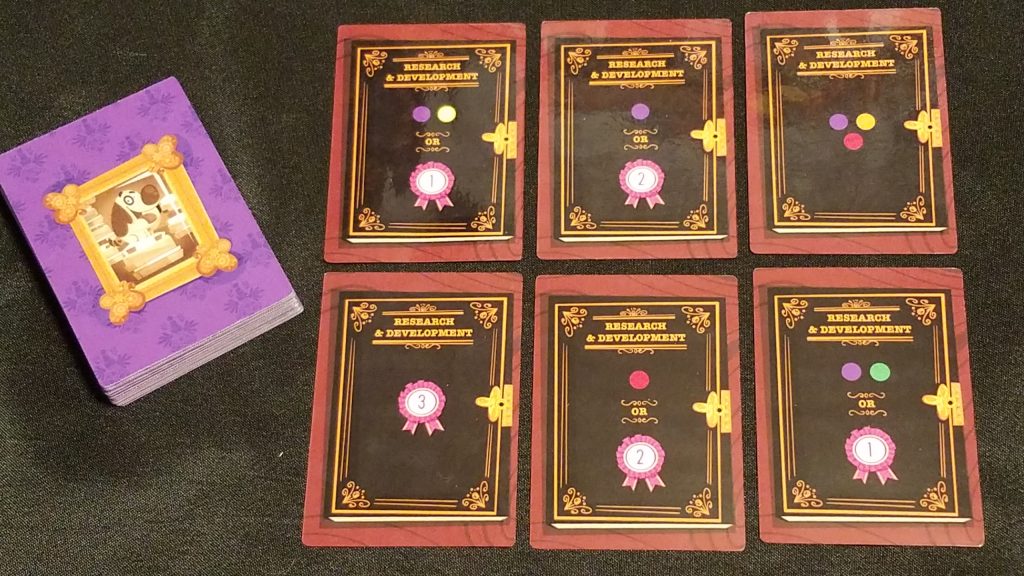 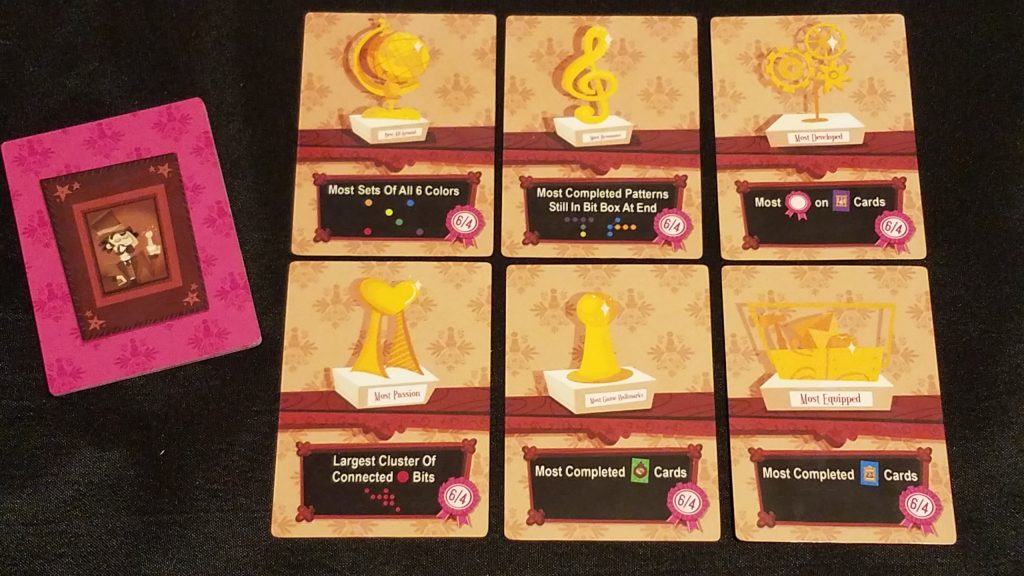 Andrew: Now, if the only mechanism Roland Wright: The Dice Game featured was adding bits every turn, it would be a simple game indeed.  But where things get really interesting (and truly innovative) is the fact that each turn, you may also erase a bit.

Jess: And that’s more exciting than you might realize! 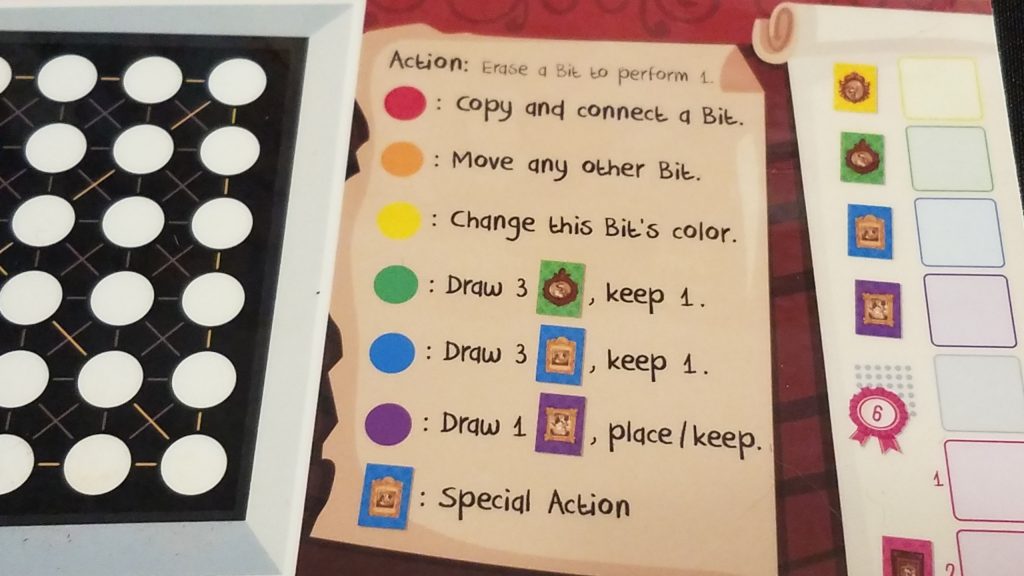 When a player optionally erases a bit, they get to take a bonus action, depending on the color bit they erased.  These actions range from moving bits, changing their colors, adding extra bits, and drawing extra cards for more scoring opportunities.  These actions are strategically vital to out-design your opponents, and mitigate a lot of the luck that the dice represent in Roland Wright: The Dice Game.

Andrew: But of course, if you’re erasing bits, you’re eroding the very patterns you’re trying to build!  So every turn is a quick cost/benefit analysis of whether you need a bit in place long enough to complete a card, or whether you erase it for its effect.

Jess: And I loved that!  When you complete a card, it stays completed even if you erase its component bits, so your board is never really ‘locked’ – you decide how and when you want to spend your bits.  It adds strategy right where Roland Wright: The Dice Game needs it, making for a much more satisfying overall experience. 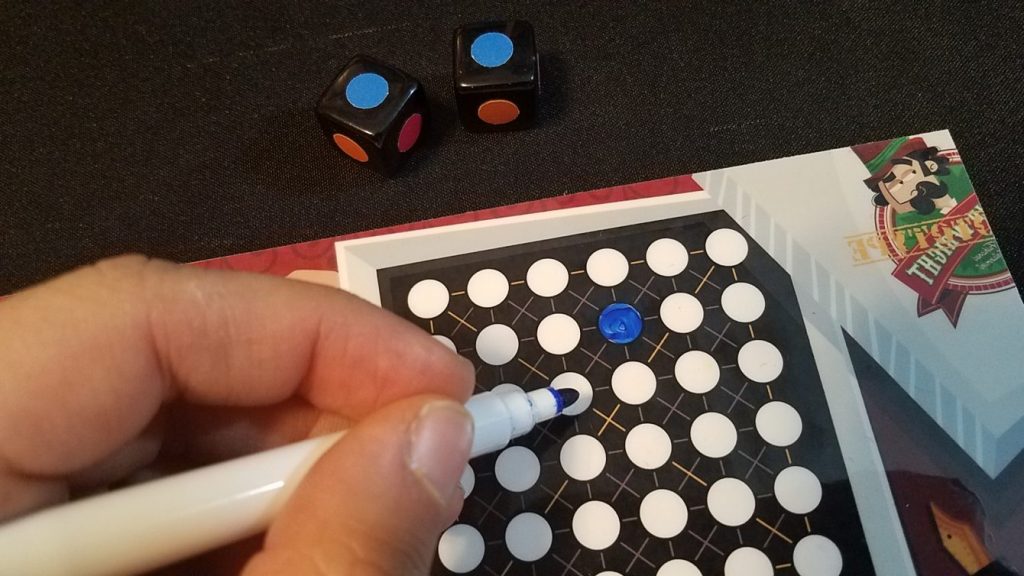 Andrew: Absolutely!  And since the game-end trigger is determined by a player’s board being (nearly) filled, the rate at which people are erasing bits will make the game length vary, lending its own strategic element.

The nature of Roland Wright: The Dice Game’s design does bring to mind two ‘criticisms’ (with quotes placed strategically to imply that these are really your-mileage-may-vary observations, and not true weaknesses).  The first, which we’ve mentioned, is the abstract nature of the game – the theme is clever and the art is great, but ultimately it’s dots on a board, and never feels like anything else.

The second is that it is a very solitary game.  With the exception of the lead player deciding what dice to hold for themselves, there is absolutely no way to interact with the other players – you’re all theoretically competing for end game Award card scoring, but ultimately, you’ve got zero way of influencing your fellow designers, and vice versa.

Jess: Like you said, ‘your mileage may vary’ – these things will either bug you or they won’t, and personally I didn’t mind at all.

Andrew: Neither did I.  Roland Wright: The Dice Game is a tight, unique roll & write, and these little quibbles did nothing to detract from my enjoyment of the game.

On the whole, we definitely recommend checking out the Roland Wright: The Dice Game  Kickstarter campaign.  Roll & write games are most assuredly a hot game type right now, and it’s really fun to see what sorts of clever innovations designers can bring to the genre.  What Roland Wright: The Dice Game does differently than other’s we’ve seen is that it gives you a bit more strategy, a bit more decision making, and a bit more to think about than its clever presentation and candy-bright markers might suggest, and we love that!

Here’s a link to the Roland Wright: The Dice Game Kickstarter page – highly recommended for fans of the genre looking for a game that goes just a bit beyond the basics!