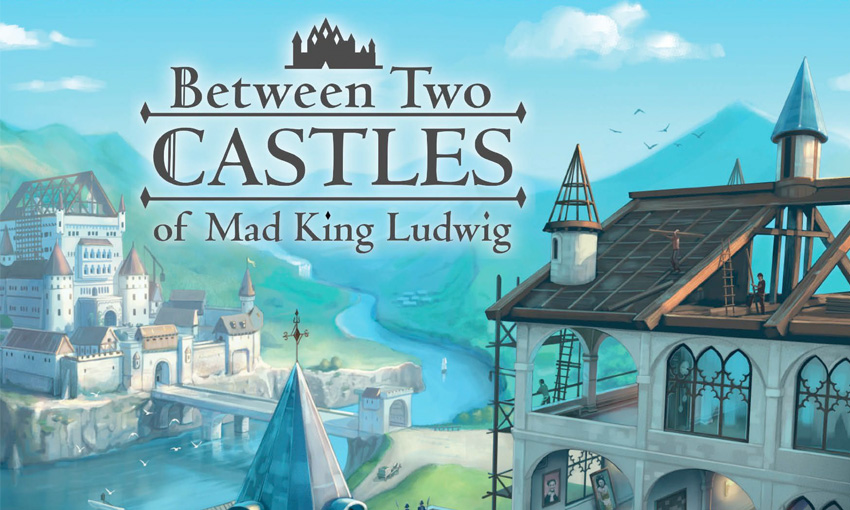 The Mad King is at it again!  In Between Two Castles of Mad King Ludwig, His Majesty’s pathological fixation on housing has created a situation where you, as master builders, must collaborate on prospective designs in order to impress the king and win the game!  But make no mistake, though Between Two Castles of Mad King Ludwig is a team game, only one among you will earn the glory associated with figuring out precisely where the buttery should be placed.

Jess: I mean, everyone loves a buttery!

Sadly, unlike most other Mad King Ludwig games, we don’t believe Between Two Castles of Mad King Ludwig features a buttery.  We apologize for any misunderstandings this may have caused.

Jess: Where things get interesting is the whole ‘two castles’ concept – you and your immediate neighbors are partners, and each of you contribute a tile to your shared castle every round.  The twist is that you don’t know what your partners are drafting during the drafting phase of each turn, and you can’t discuss anything with them until after you all commit to what tiles you’re taking.

Each tile in Between Two Castles of Mad King Ludwig represents an opportunity to score some points.  Depending on a tile’s type, it will want to be placed into the castle in certain ways, either based on adjacency to other tiles, location within the structure, or number of similar tiles.

Jess: Each time a 3rd room of a type is added to a castle, you and your partner will be able to gain a bonus, based on the room type.  These vary from placing extra regular rooms, to adding bonus tiles, to gaining bonus score cards!

With each tile added, your castles will become more and more valuable.  If you’re smart (and lucky) you and your teammates will draft room tiles which synergize well.

Andrew: Unfortunately, sometimes that’s just not possible, due to the random nature of the draft.  But even if a tile isn’t perfect, it can probably be placed in such a way that it might create future scoring opportunities.

The game lasts a scant 2 rounds, during which you and your partners will continuously add tiles to your castles.  Once the game is finished, all castles are scored, with each player’s score being the lesser of the two castles they have built.

Jess: What I love about the final scoring is how it means you can’t neglect either of your castles.  Since your score is the lower of the two, you need to balance the awesomeness of your two castles, making both partnerships equally important!

Andrew: Absolutely!  One of the most unique things about Between Two Castles of Mad King Ludwig (and its predecessor) is that it is a cooperative, team-based game where ultimately only one player wins.  That’s a really neat combination of traits that makes for a really engaging experience. 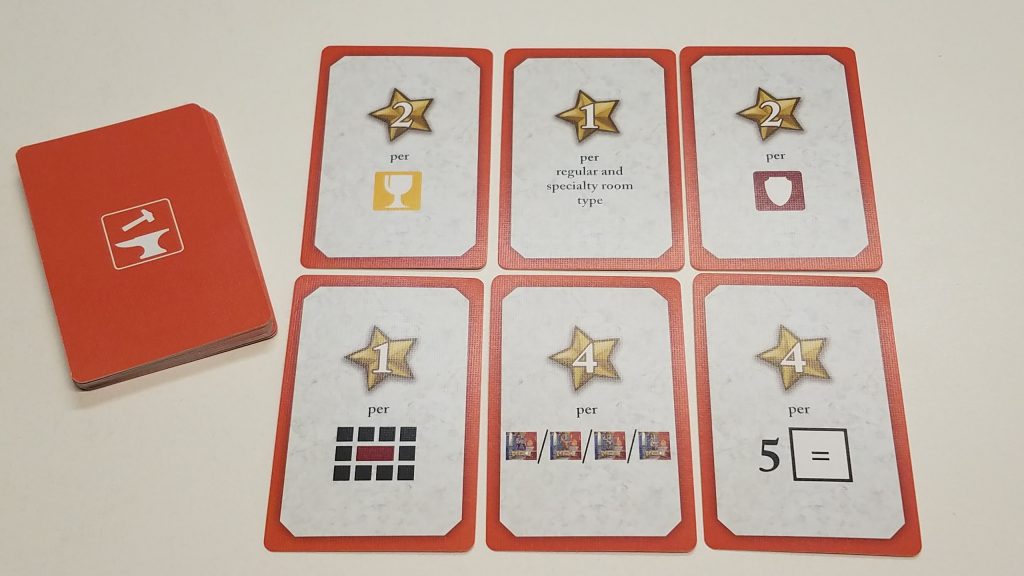 Between Two Castles of Mad King Ludwig’s gameplay is quite simultaneous – players will draft tiles at the same time, and then place tiles at the same time, quickly discussing strategy with their partners as they do so.  Turns take moments regardless of the player count, though towards the end of the game, things do tend to slow down as opportunities to optimize your points mean you need to consider what would be valuable for both your castles, and where you might end up placing them.

The analysis paralysis-prone of your group will inevitably find the plethora of options a potential sticking point, but the beauty of Between Two Castles of Mad King Ludwig’s design is that the toughest decisions, when you have the biggest pile of tiles to choose from, happen earlier in the round, meaning that the game overall actually speeds up as it goes on, from round to round and turn to turn.

Andrew: The cadence of this game is one of my favorite things about it.  For all the decision-making, you really do find yourself moving along at a steady clip.

Jess: For sure!  I also really like that moment after the drafting is over, when the table sort of bursts into conversation as people start working with their neighbors to quickly decide what tiles should go where.

Beyond its brevity, another laudable feature of Between Two Castles of Mad King Ludwig is its aesthetic.  Packed onto each tile is thematic art that makes the game sit attractively on the table (and it will take up plenty of table space, make no mistake) – though, to be fair, it also means that iconography is relatively small, something that might not always make at-a-glance assessments of your castle as easily as we would have liked. 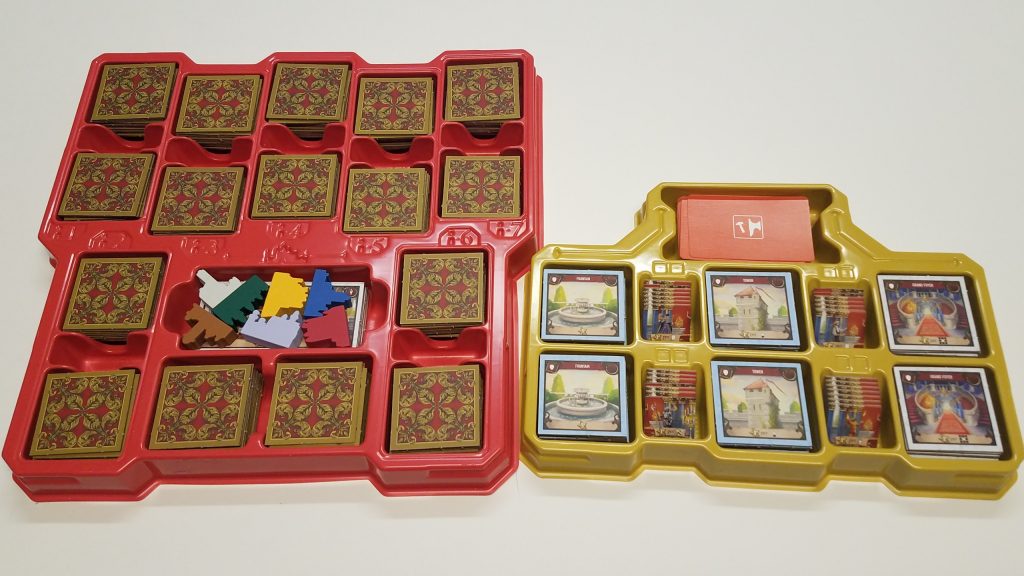 The quality of its presentation lies completely in line with every other Stonemaier Game we’ve seen, and it even features Game Trayz inserts to keep everything neat and tidy between sittings, and incredibly easy to deploy come game time.

Jess: So overall, I think it’s safe to say that we think Between Two Castles of Mad King Ludwig is a great game, yeah?

Andrew: Absolutely yes.  It’s incredibly playable, fantastically presented, and is definitely a solid choice for a big group who wants to play something more substantial than most ‘party’ games.

But now to address the obvious question – in a world where we already have the excellent Between Two Cities, where does Between Two Castles of Mad King Ludwig fit?

Andrew: Well, both games are great, but which one you pick for your shelf depends entirely on your typical group, I think.  Here’s my breakdown.

Both these games fit a very, very similar niche, and both are satisfying and fun to play.  They both provide easy to engage experiences, with Between Two Castles of Mad King Ludwig sitting on the more complex side and Between Two Cities favoring accessibility and speed.

Andrew: So, which one do I recommend?  Well, personally, I can make the case for keeping both – I run a lot of game nights, and there will be times when Between Two Cities is the better fit (new hobby gamers, folks looking for a simpler experience, etc.).  Then again, the complexity jump in Between Two Castles of Mad King Ludwig makes it perfect for people who really liked the idea of Between Two Cities, but didn’t find it ‘gamerly’ enough.  But ultimately, I feel like you can’t go wrong with either!

Suggestions based on Between Two Castles of Mad King Ludwig… 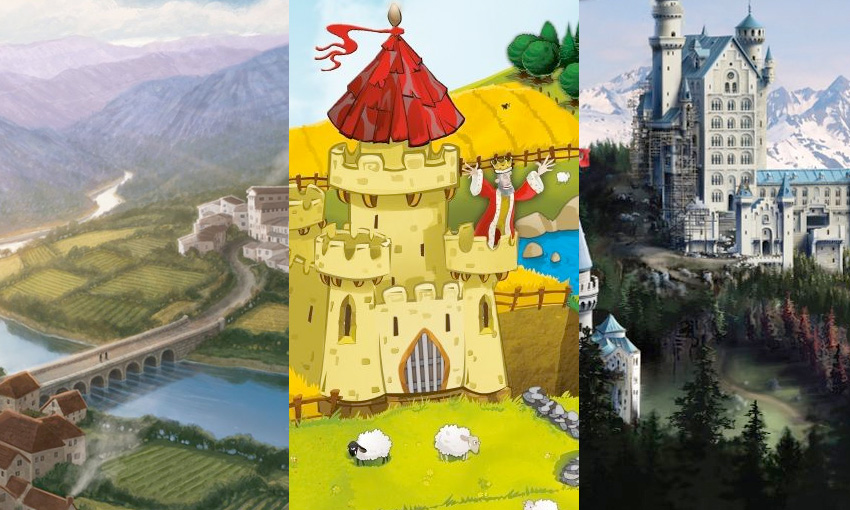