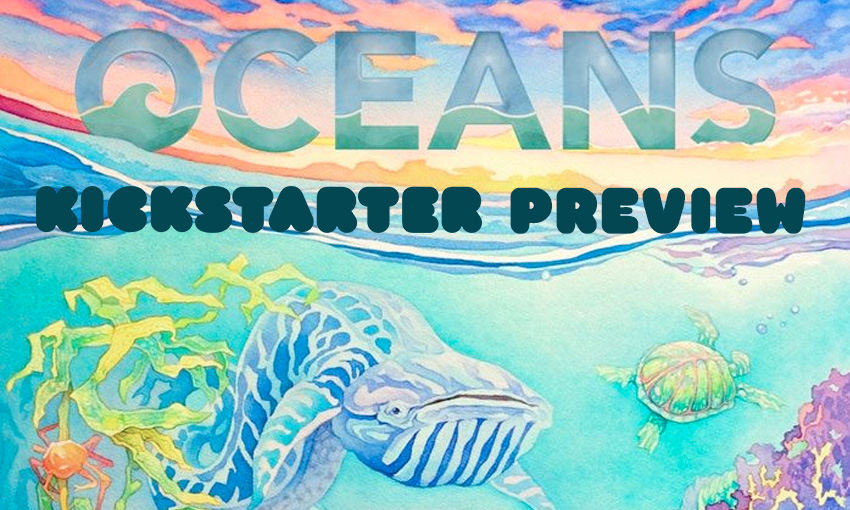 Oceans is a stand-alone game in the Evolution series, which we really enjoy. While it shares DNA with its sibling games, this latest offshoot emphasizes player interaction, both positive and negative, and brings a huge potential for unique species creation with the Deep deck.

Up on Kickstarter right now, Oceans from North Star Games is the latest mutation of their much-beloved Evolution series.  But is this also the greatest?  Well, come with us as we plumb the depths of this new standalone entry into one of our favorite franchises – here’s our preview of Oceans!

Gameosity received a prototype of Oceans.  We were not compensated for this preview.  All images are either of that prototype or from the Oceans Kickstarter.

Andrew: Now, right up front, I just want to say this – while we do talk about how Oceans relates to other games in the Evolution series, I want to be clear on two major points:

Cool?  Cool.  Ok, back to the preview thing! 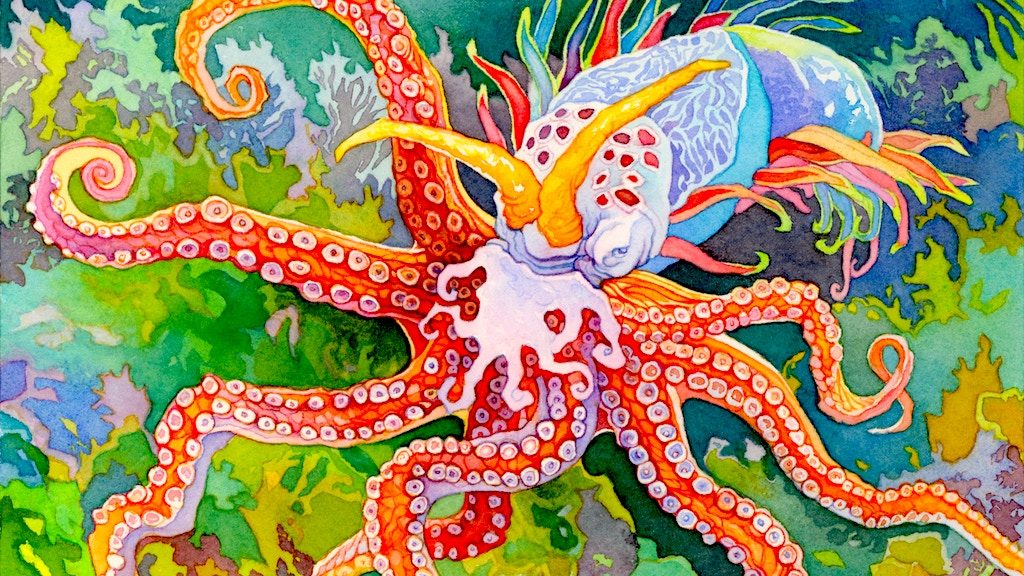 In Oceans, much like the other games in the Evolution line, your goal is to be the player who manages to evolve the most successful group of species.  Your hand of cards depict a plethora of traits which can be added to your species – these traits are crucial in giving your species a method of staying fed, which is the key to maintaining their population size, which translates into pocketed points for you.

Jess: Some of the traits you can evolve for your species form natural combos with each other, making it possible to keep more than one species alive at a time, despite the limit on feeding.  Making these combos is super satisfying, and the cleverness with which you can fit them together is a great part of Oceans!

Andrew: And that’s before we get into The Deep, a massive pile of traits that…you know what, let’s save that for a moment.

Food (and therefor population) comes from two places – either the ocean, represented by a series of resource pools, or from other species (your own or your opponents).  Each game, two scenario cards will be randomly drawn, each one triggering when a particular resource pool is emptied. 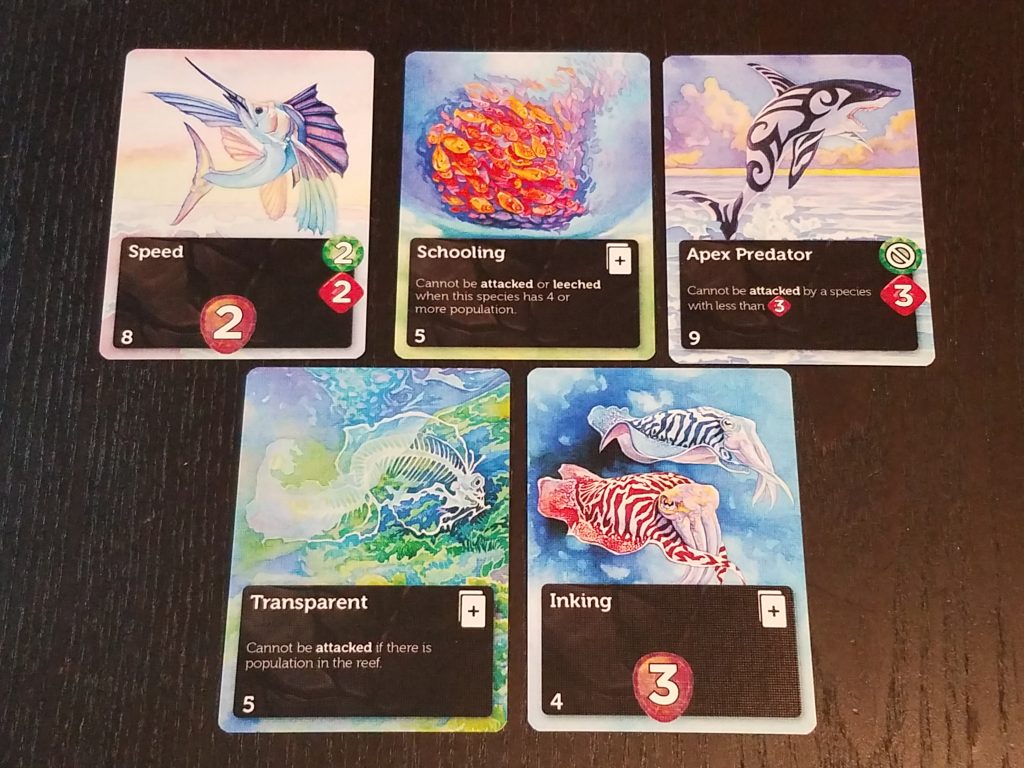 Andrew: These scenarios can drastically change the flow of Oceans – some encourage huge population booms and more reserved gameplay, while others help you sink your fangs into everything that swims.  There are immediate events that can be triggered over and over, or persistent effects that last the rest of the game. 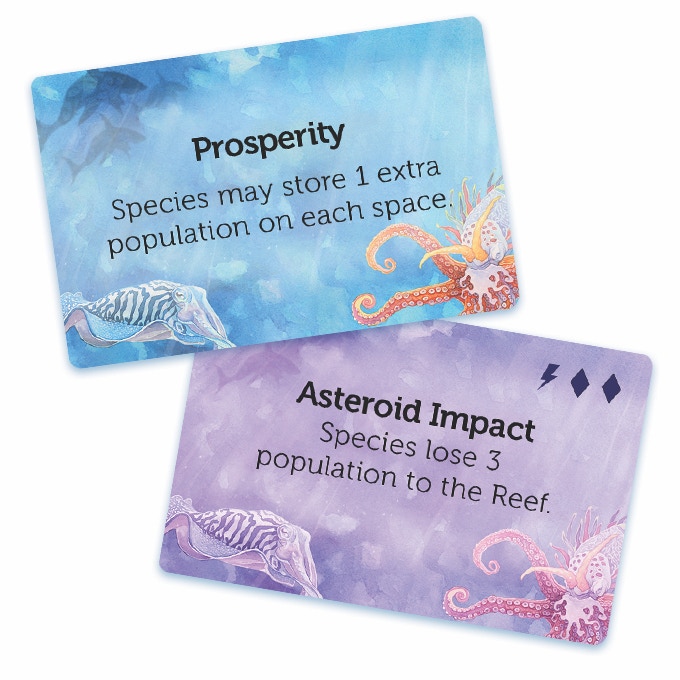 Jess: And awesomely, events that create higher player interactivity are marked as such, so if you want to keep things a little more civil, you can easily filter for that.  Get it?  Filter?  Like, a filter feeder?…There are filter feeders in this game, is what I’m saying. 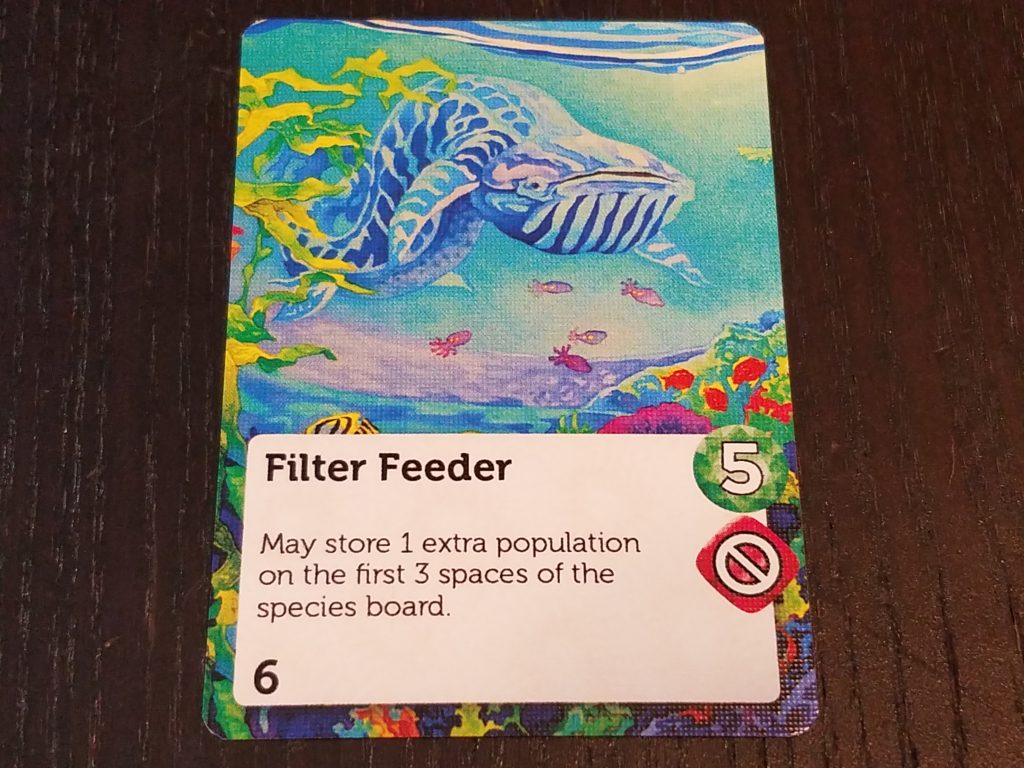 However, no conversation on Oceans would be complete without a discussion of The Deep.  This deck of cards are all unique super-traits, one-of-a-kind mutations that you can begin to draw from as soon as the first resource pool is empty (representing the Cambrian Explosion, which rapidly increases the rate and capacity for all species to evolve – even beyond the boundaries of evolutionary history and into the realm of the theoretical!

Andrew: The Deep is where things go a little crazy, in the best way.  Where there was once a reasonably predictable pool of traits that might show up, the variance added in the Deep turns everything about Oceans up in intensity.

Jess: I’ll say!  Not only are there super-powerful versions of common traits, but every card in the deck is unique, and almost any one of them can feel like a real game-changer!

Of course, such powerful evolutions come with a cost – in order to add Deep traits to your species, you will need to pay a cost in previously-banked points, meaning that every play is a cost-benefit analysis, adding depth (sorry) and nuance to the gameplay.

This decision-point is indicative of the things that make Oceans the great experience that it is.  Oceans is one part puzzle, one part high-wire act.  Each turn, each action, will slightly (or severely) alter the trajectory not just of your own game, but of that of the people around you – species in Oceans are all interconnected, and often influence each other in more than just predator/prey dynamics.  And in the delicate interconnectedness of the Oceans ecosystem, you need to be very intentional about the way you develop your species if you hope to have them survive long enough to turn a profit in points.

Andrew: There is more direct player interaction in Oceans than in any previous Evolution game, and despite our general disinterest in player-vs-player contention, this turns out to be a great thing – with more opportunities to interact beyond just ‘I eat you’ (and even that being less punishing than in other Evolution games), the possibilities for building point-generating dependencies are much more nuanced.

It’s no secret that Team Gameosity are fans of the Evolution line from North Star Games.  Rob & Diana loved the original, Jess and I think that Evolution: Climate is an even more impressive iteration.

Andrew: What we love so much about the games in this series is how gameplay rewards a clever player who can manage to maximize their ability to feed while minimizing losses and adapt to the changing challenges of their fellow players.

Jess: All the while evolving really interesting creatures!  I love that Evolution lets you adapt on the fly to the shifts in the environment and other players’ strategies.

Oceans takes all that to a new level.  While it doesn’t precisely replace Evolution for us, it offers a differently-paced experience.  The increased player interactivity means that Oceans is great at the 2 player mark, though it doesn’t add too much complexity with more players, keeping Oceans playable and lean – like the apex predator it aspires to be.

The bottom line is that we’ve had a blast with Oceans.  Even if we weren’t sold on the game because of its stunning art, even if we didn’t already have a history of loving the games in its series, Oceans does enough to stand on the merit of its gameplay.  We absolutely think that you should check out the Oceans Kickstarter and see if there’s something swimming in the depths that might intrigue you!