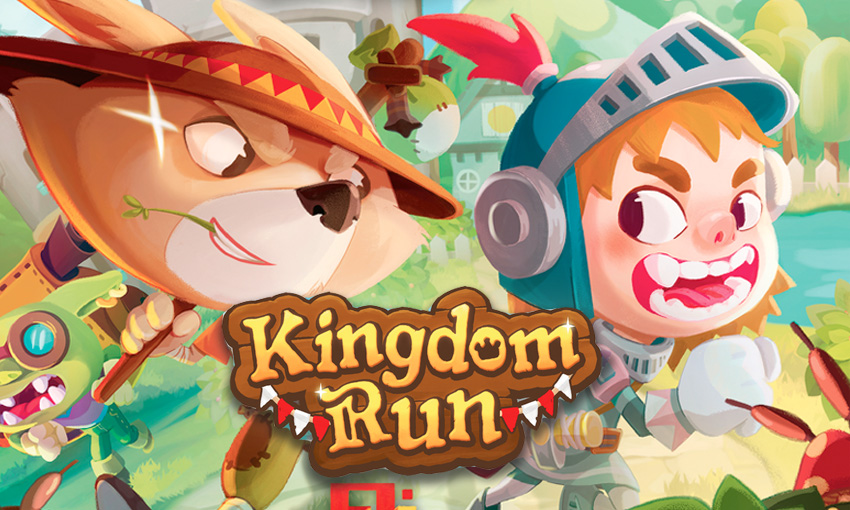 I enjoy a lot of the family-friendly games we play, since many modern titles are designed to be accessible to everyone while still being engaging enough for adults to enjoy alongside younger players. And in this regard, Kingdom Run does not disappoint. 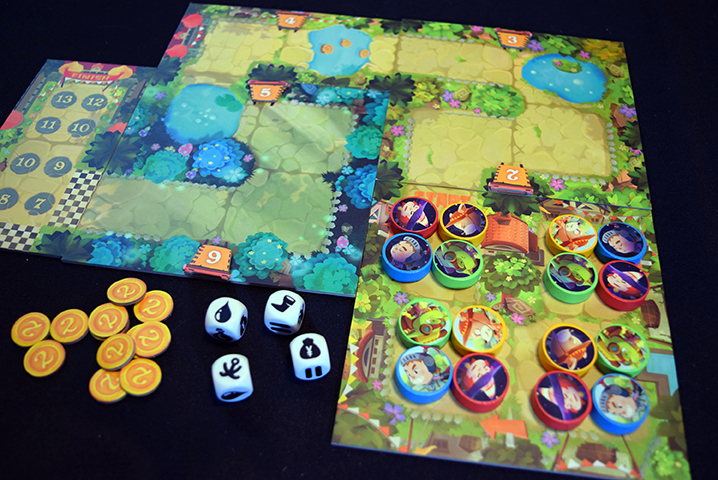 Designed by Eric Claverie and published Ankama Games, Kingdom Run is set in the land of Ewala, where every 100 years the king organizes a race between the various clans. The clans send forth their four best athletes to run the race, because whoever wins will have the honor of choosing the new king.

Andrew: Not necessarily the most logical way to elect your monarch, but at least we put on a good show! 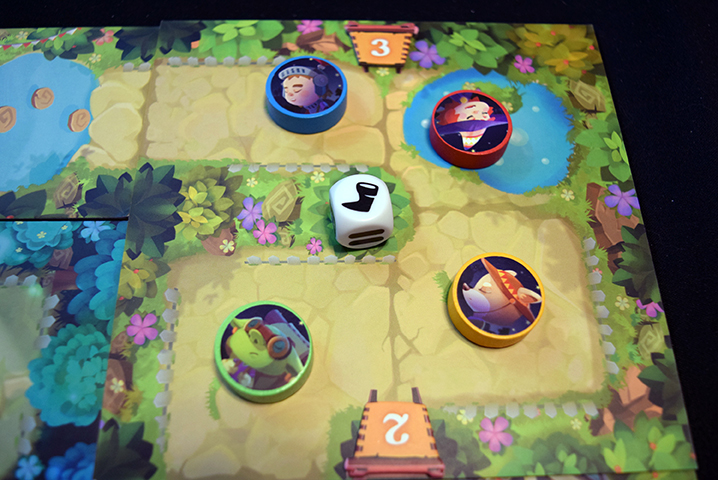 The game board is made up of modular tiles, so your race tracks can vary from game to game, but you must always have the start and finish boards must be at the opposite ends of the track and the race must include three lakes.

Jess: This adds some variety to the game, but as a bonus it also means that the game fits into a small, portable box, so you can bring it along on family outings or to game night with friends! 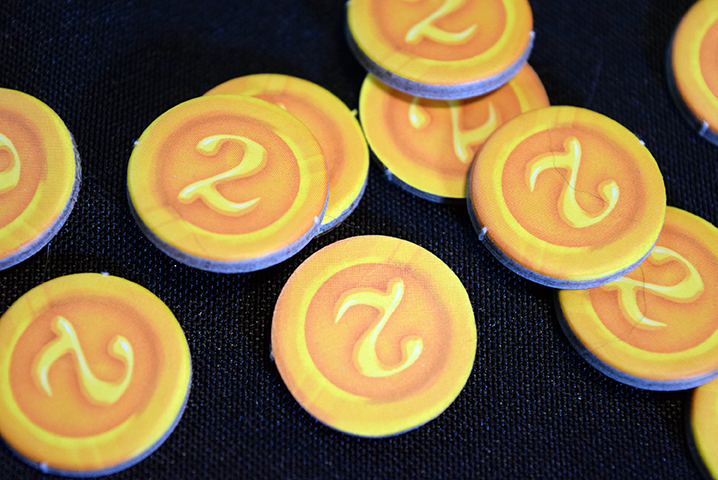 At the game’s start, the victory points are distributed equally among the players. Each turn, the active player will roll the four dice (re-rolling once if they like) and then may perform the actions on their dice. An action can never be performed more than twice on one turn, so sometimes you won’t be able to use all your dice. what’s fascinating about Kingdom Run is that any player can move any character so long as they move in a forward direction. This can lead to some very strategic plays. 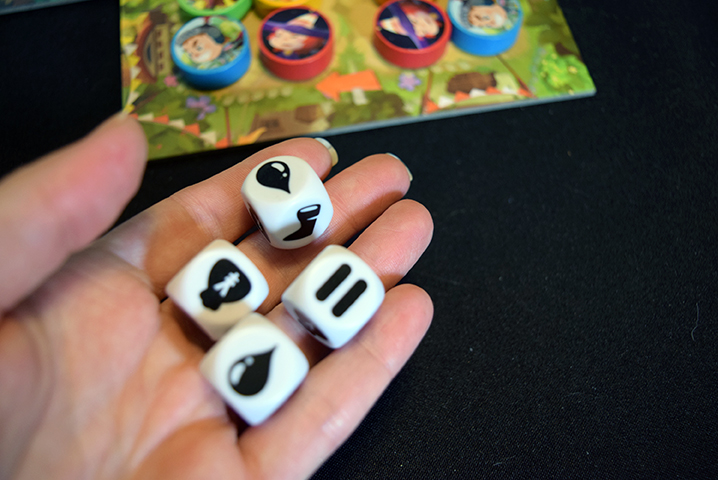 For example, each space can hold up to four runners, but if a character lands on a space that is full, that character will be placed on the next available space. If you want to move very quickly then lining up your opponents in front of you could mean that you can leapfrog over them and make up a ton of ground. 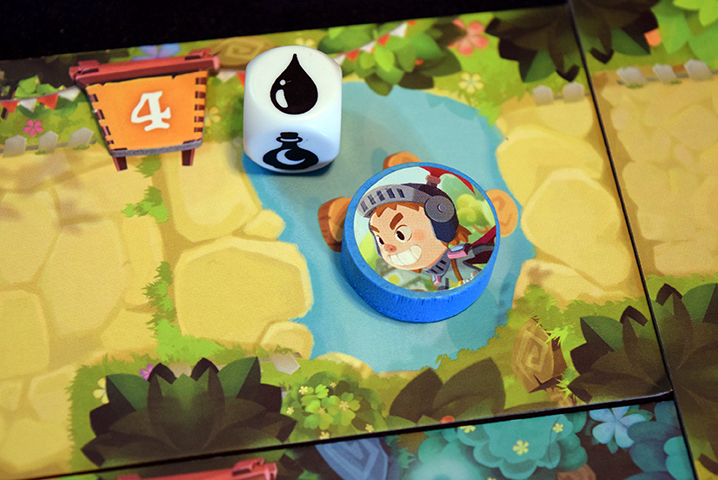 The lakes also factor into movement in some interesting ways. If you roll a “bathing” icon, you can move a character into the nearest or one space out of a lake. So let’s say you are 3 spaces away from a lake and you roll bathing. You can skip right over those spaces to the lake, but until you roll another bathing icon you’re stuck swimming. Depending on how you roll you can use the lakes to take the lead or strand your opponents offshore. 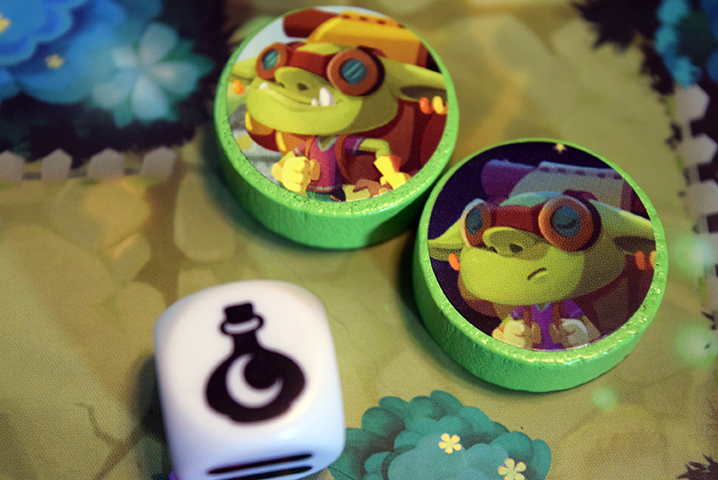 The rest of the actions are as follows: 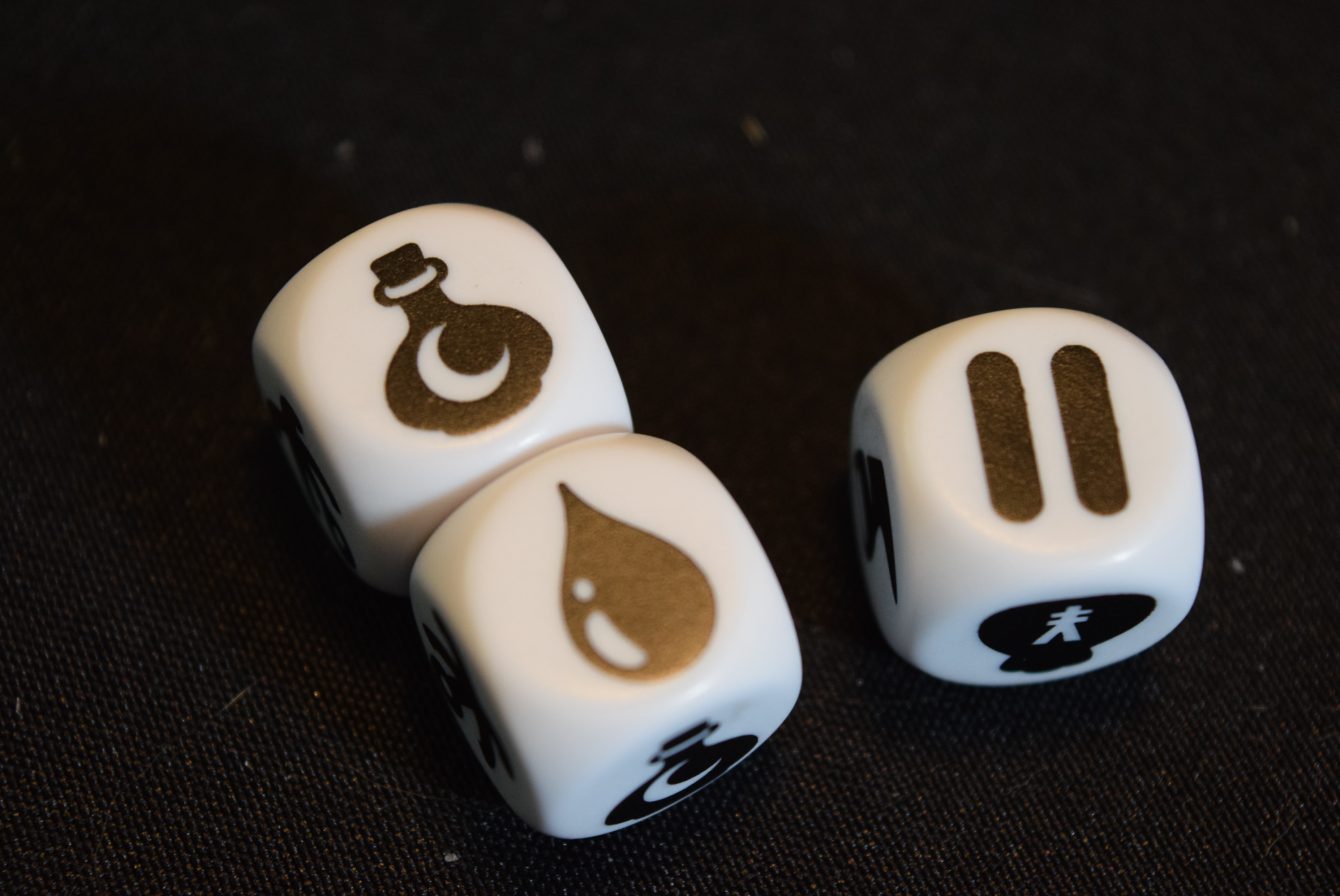 When a runner crosses the finish line, they are placed on the highest available slot of the podium and awarded points for their position. When the last slot on the podium is filled, the game ends and everyone tallies up their points based on their position on the podium, the position of the runners still left on the racetrack, and 2 points per victory point token. Whoever earned the most points wins! 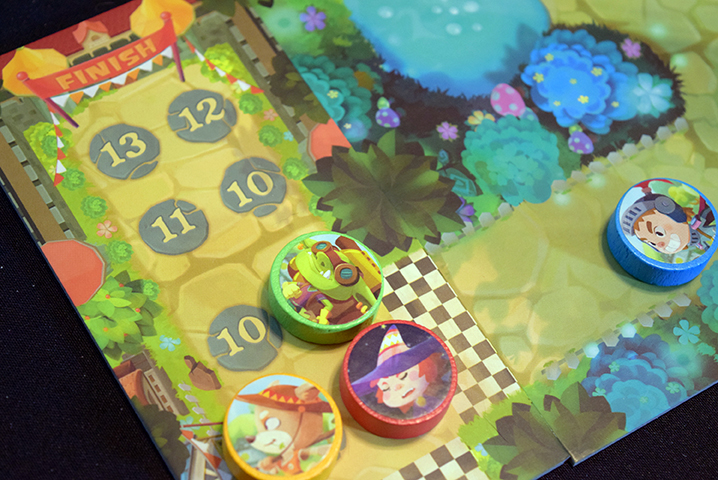 Andrew: So, I’ve got to say, this one surprised me!  Kingdom Run turned out to have a lot more nuance than I imagined, based on its size and cutesy artwork, and the fact that it is literally a roll & move game.

Jess: Heck yeah!  The different actions are simple enough to understand, but the turn-by-turn puzzle of how best to use your dice rolls is surprisingly satisfying.

Andrew: I totally agree.  I think Kingdom Run is a great little game for its size and weight, and can absolutely find a place between larger, heavier games at both game night and the family table.

Kingdom Run has a surprising amount of depth for what first appears to be a simple racing game. We had a blast pushing each other into lakes and bouncing over opponents to take the lead. Chaotic, fast, and fun, Kingdom Run is great racing game for anyone looking for something portable that can be played with all ages.

Suggestions based on Kingdom Run 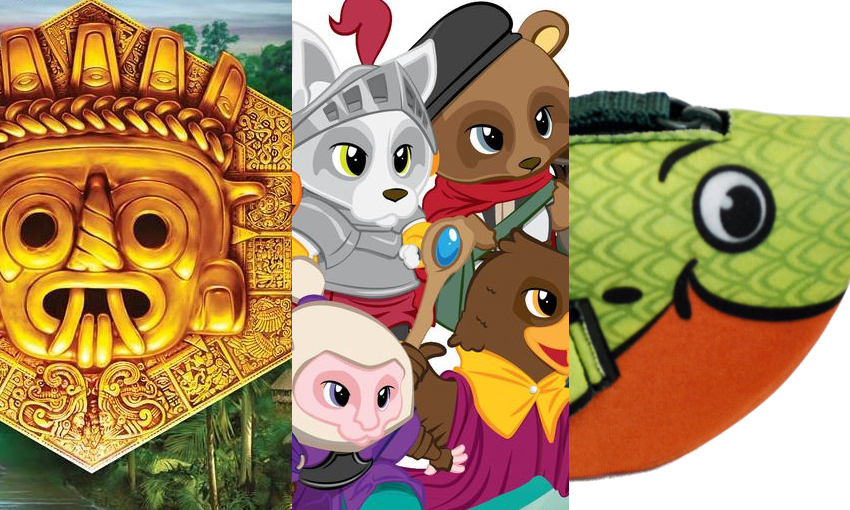 One thought on “Kingdom Run Review”