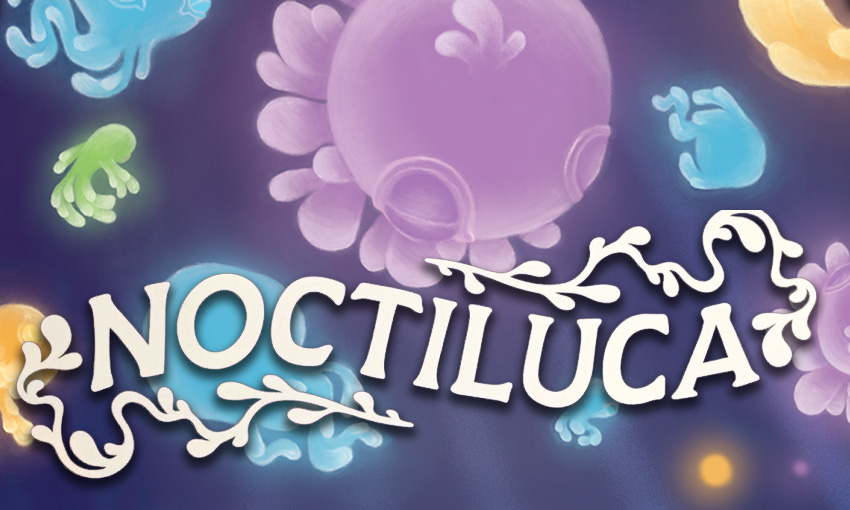 Noctiluca is a beautiful, accessible set collection game that delivers abstract gameplay with lovely, understated aesthetics.  The set collection mechanisms are more generous with fewer players, leading us to actually enjoy this one most at 2.

There are games that just sit gorgeously on the table.  Sometimes, those games are highly thematic and hugely produced – ultra-detailed miniatures, player screens emblazoned with murals of unique art, etc.  But sometimes, it’s the simple things that make a game stand out.  Noctiluca sits comfortably in this second camp, delivering its relatively simple gameplay with a unique palette of colors and some lovely artwork. 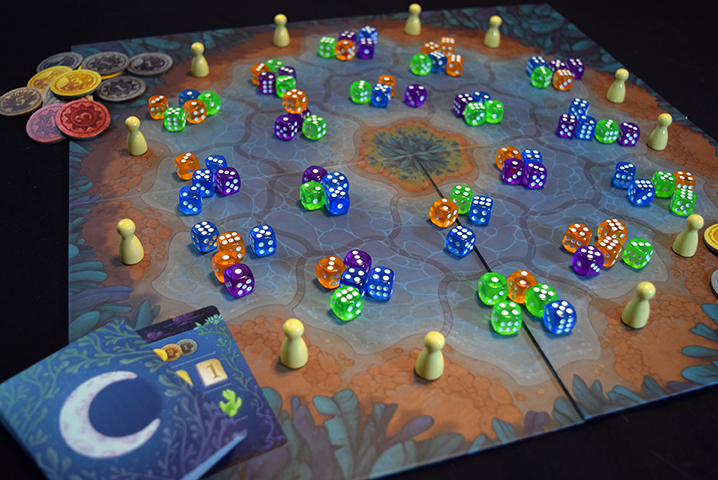 Andrew: Wikipedia defines ‘Noctiluca’ as “a free-living, marine-dwelling species of dinoflagellate that exhibits bioluminescence when disturbed”.

Jess: So, little guys that glow when you put them in jars and swirl them. 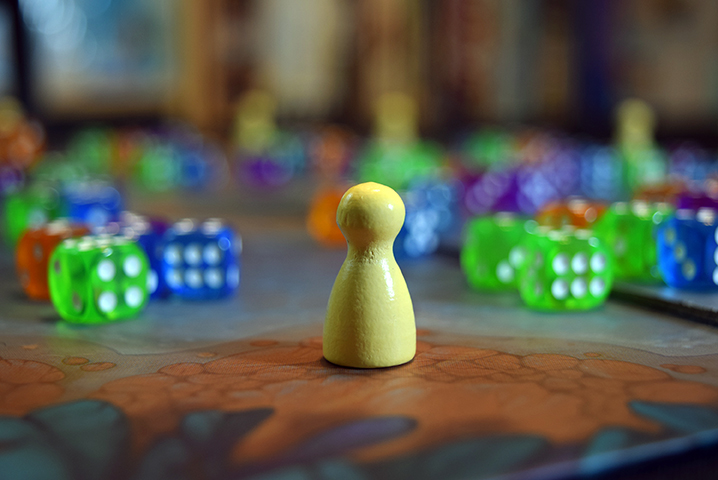 That, right there, is about as much context as you need for Noctiluca’s theme.  What we have here is a very abstract game indeed, one where a field of collection spots are populated at the top of the round by randomly-rolled dice, representing the titular creatures, which each player is attempting to collect. 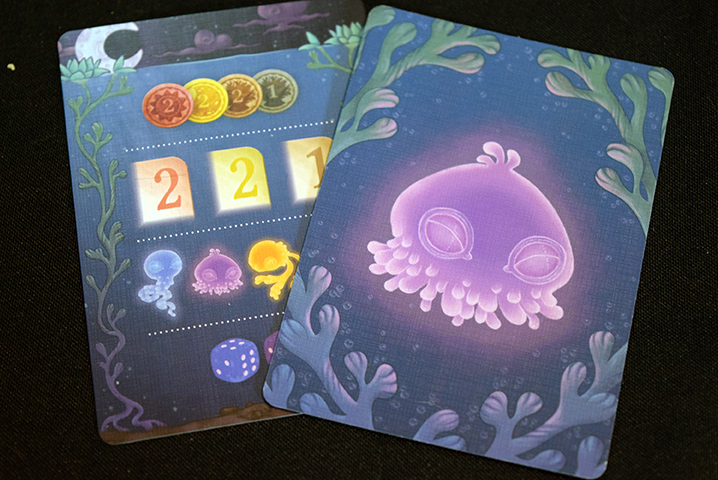 Players hold jar cards, which Each player is given an equal number of pawns, which they will use to mark their starting space on the edge of the pool.  On their turn, a player marks an empty starting space, picks a value between 1 and 6, and then collects dice along a straight line across the pool in one of the two orthagonal directions from their pawn.  They collect all the dice of the value they chose, regardless of color. 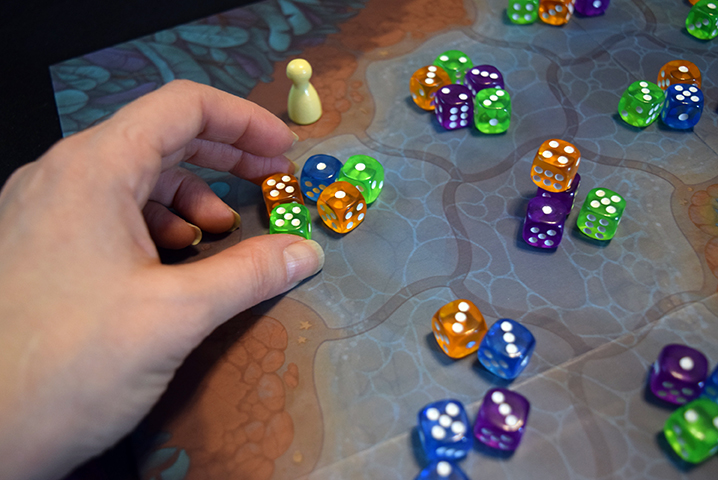 Collected dice are placed on a player’s jar cards.  These cards, once complete, are a main source for scoring points in Noctiluca.  Each jar requires a certain combination of dice, but only their color matters when placing. 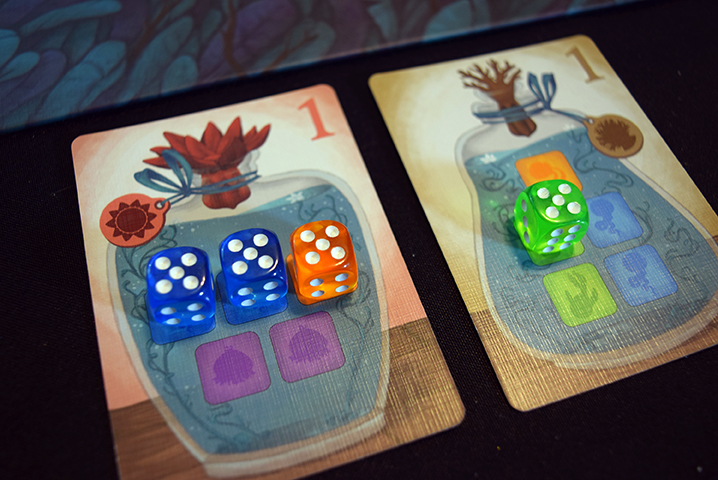 Andrew: Once you’ve placed all the dice you can, any excess get passed to the next player, who can place a die of their choice (if possible) in their own jars.  If there are still dice to be placed, they get passed to the player after that, and so on until either all dice are placed or the remaining dice can’t be placed and are discarded.

Jess: And that’s where one of the really neat decision-points in Noctiluca comes in – if you’re lucky enough to have the opportunity to snag a whole pile of dice, do you do so on the likelihood that you’ll be handing your opponents some?  Or do you try to figure out more conservative plays, possibly completing your jars more slowly, but not helping the others out? 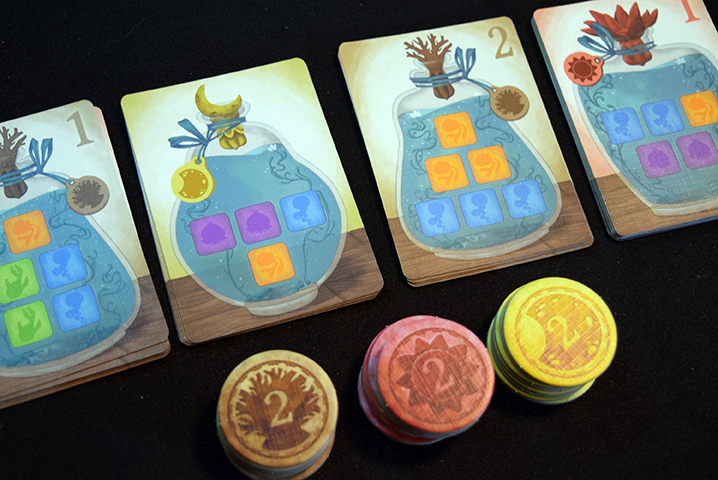 Players will take turns placing their pawns until all of them are used.  The board then resets for a second, final round.  After this round, players will add up the points they received from completing jars, as well as points from secret majority goals which they were dealt at the beginning of the game, and the player with the most points wins. 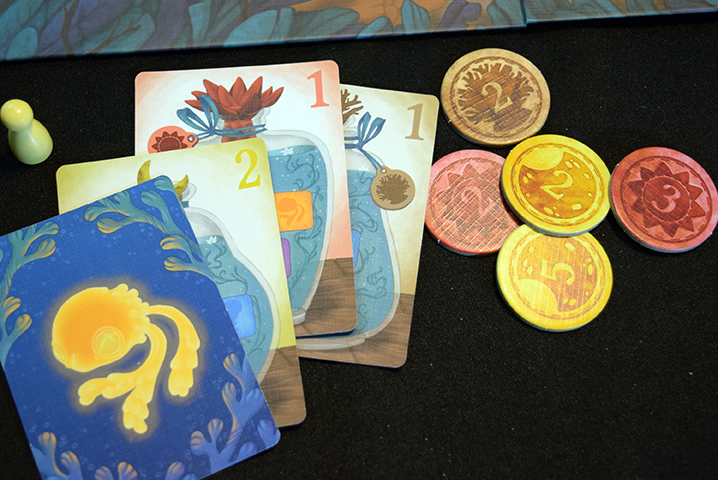 Jess: I agree!  On the other hand, I think I liked it more with fewer players – since the 12 pawns get divided between players evenly, the more players there are, the less actions you get to take, meaning that scores are lower and you get to actually complete your jars less frequently.

Andrew: Totally.  I actually think Noctiluca plays best at 2, when the potential for analysis paralysis is minimized and the number of turns you get per round is maximized. 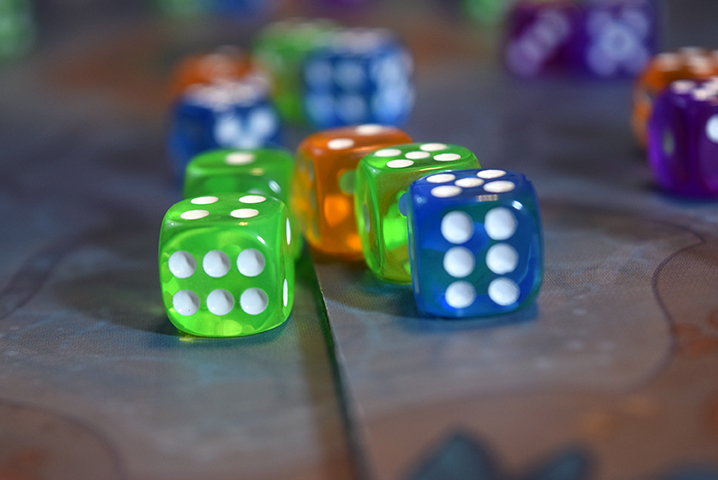 What Noctiluca isn’t, is deep.  Place a pawn, collect dice, assign them to sets.  That’s pretty much it.  But as a light, less complicated game, it was very easy to enjoy while also carrying on conversation and engaging your playmates, which paired very nicely with the gameplay experience at 2 – Noctiluca is a solid date night game, for sure, and we overall definitely recommend it!

Suggestions based on Noctiluca… 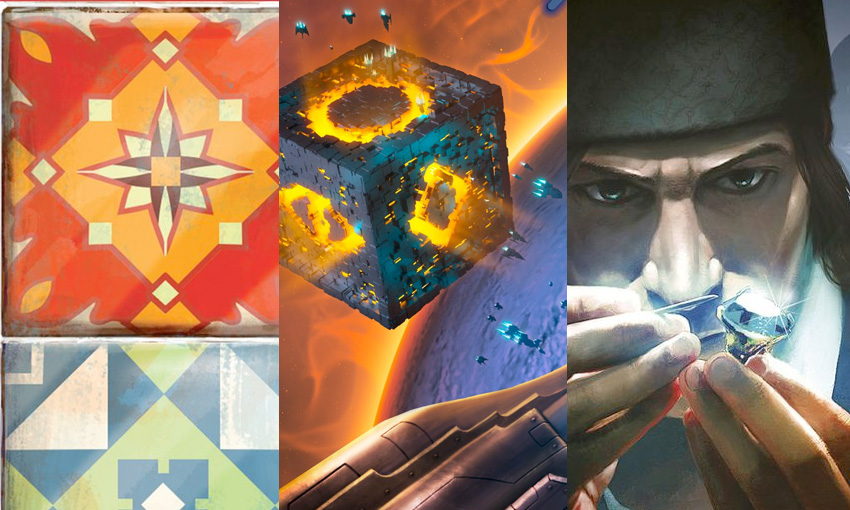