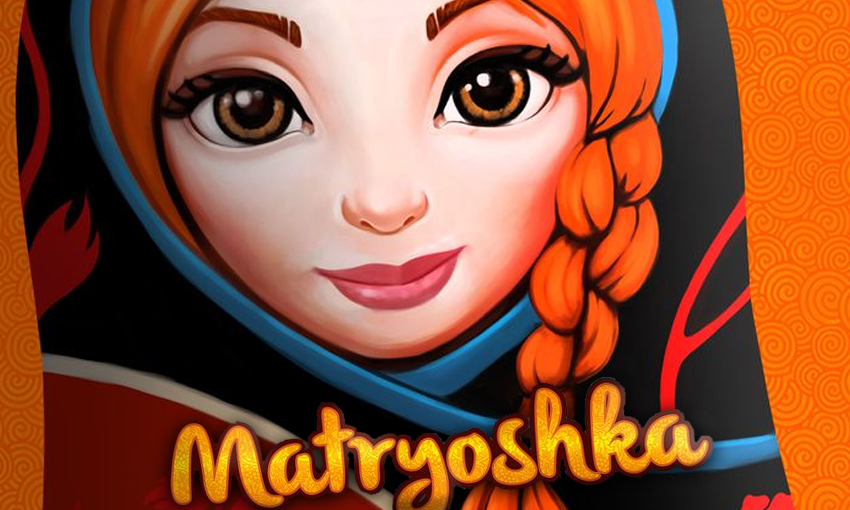 With beautiful table presence and a unique focus on card trading, Matryoshka brings some interesting design choices in its small package.  On the other hand, it really relies on card trading for excitement, which has more to do with your group than the game.

According to Wikipedia, the first Matryoshka, or Russian nesting doll, was carved in 1890.  Nearly 130 years later, Leitman Games is poised to bring a card game of the same name to the American game market with its live Kickstarter campaign.  With attractive artwork, clean and abstract gameplay, and a few really unique twists on hand management and card trading, Matryoshka is more ‘game’ than it might first appear – unsurprising, given the dolls upon which the theme is based. 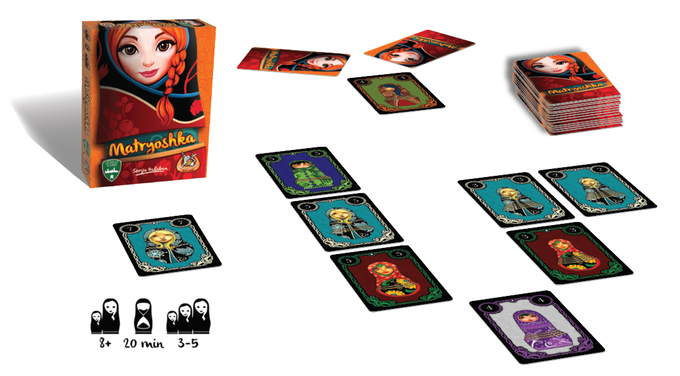 Gameosity was provided with a preview copy of Matryoshka for the purposes of this article, with the option of requesting a copy after the campaign.  We were not otherwise compensated.  All images are either of that preview copy or from the Kickstarter campaign.

Matryoshka is, simply, a beautifully illustrated game.  The artwork used to depict the dolls is awash in vivid colors an a unique aesthetic that makes it pleasing on the table.  As players contemplate their trades and assemble their sets, there is this ever-expanding tablescape of beautifully drawn little dolls staring back at you.

It’s less unsettling than it sounds, I swear. 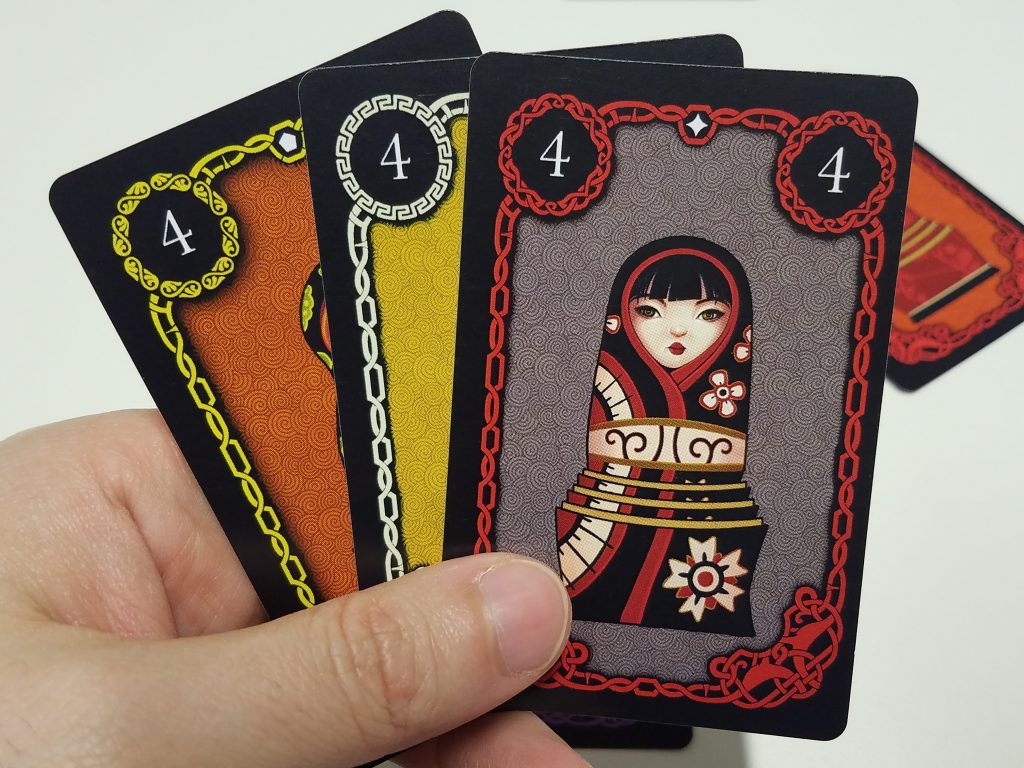 In Matryoshka, the goal of each player is to score the most points by creating sets of the titular dolls.  Each suit contains 7 cards, and you will play with more or fewer cards depending on player count.  At the end of the game, you will score points based on having created certain sets of cards; runs of sequential cards of the same suit as well as sets of identical value cards.

Gameplay in this completely abstract card game works like this.  In each of the game’s 4 rounds, players will start by drawing some cards from the deck, and then the lead player will offer a card for exchange. 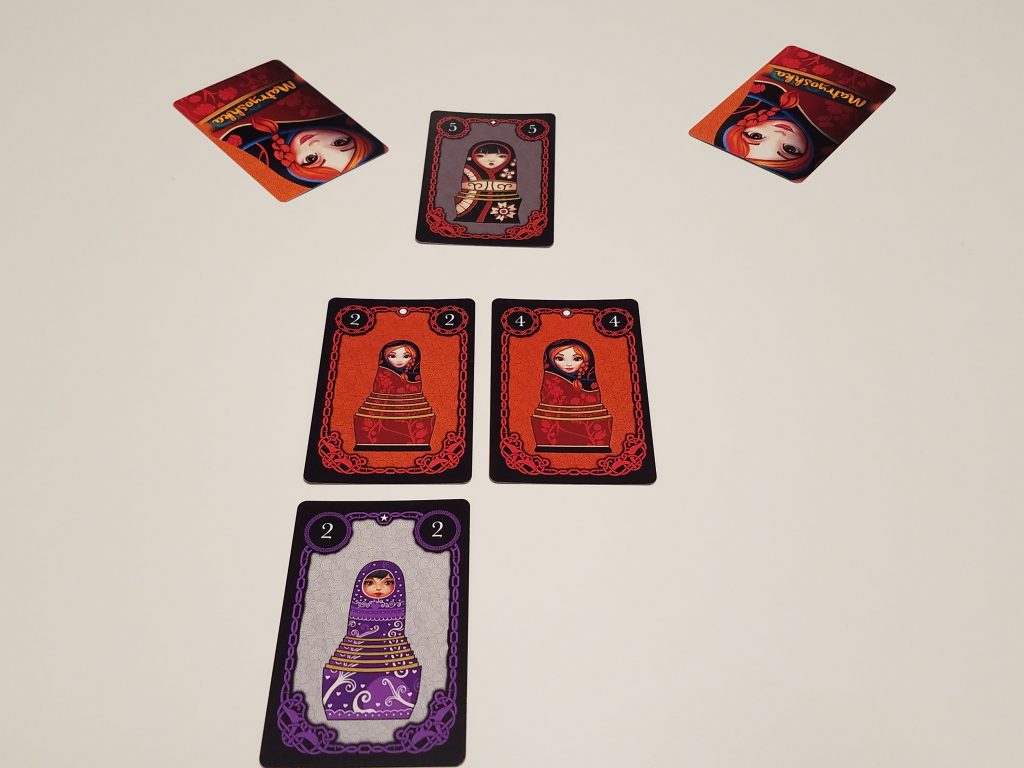 Each other player secretly offers a card they are holding in exchange for the lead player’s card.  That player picks one, returning the rest to their players, and then trades it for the card they offered.  This trading follows around the table, with each player making a trade with the group.

Simple enough, perhaps, but this is where Matryoshka makes some really interesting design choices. 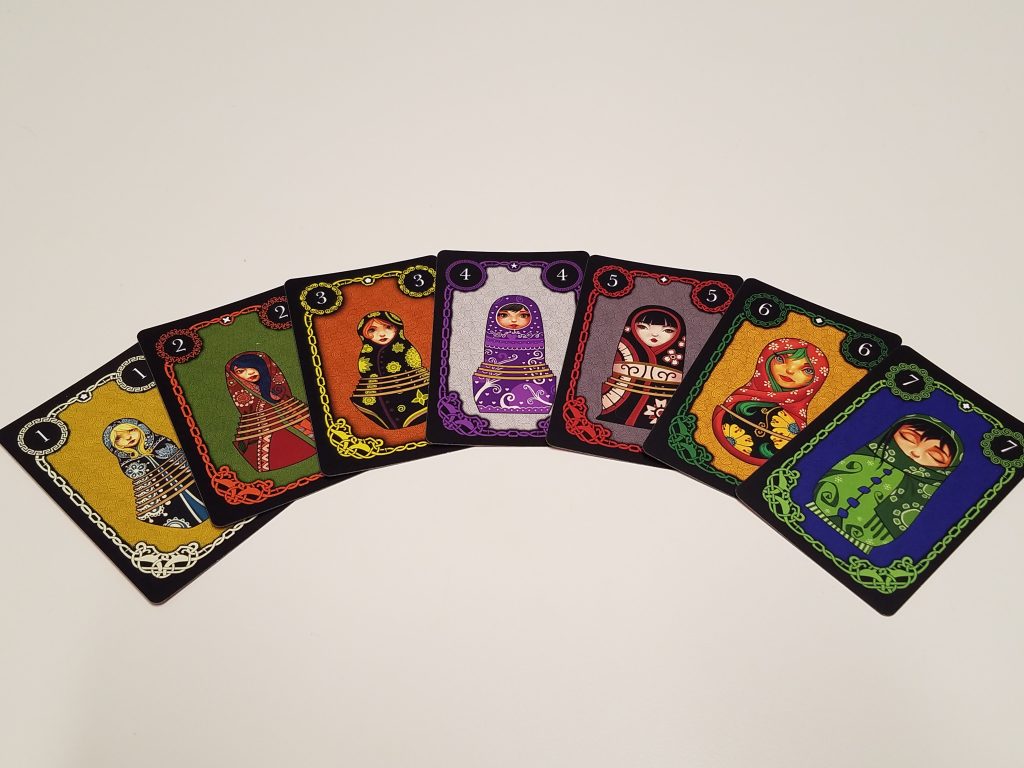 During game setup, and at the end of every round, players must construct an ever-growing display of cards from their hand.  These cards, laid out before them, are not considered available for trades – rather, they provide the table with glimpses of information on what sets each player may be looking to collect.  That information is invaluable during the trading phase, as it’s what you’ll base your offers from. 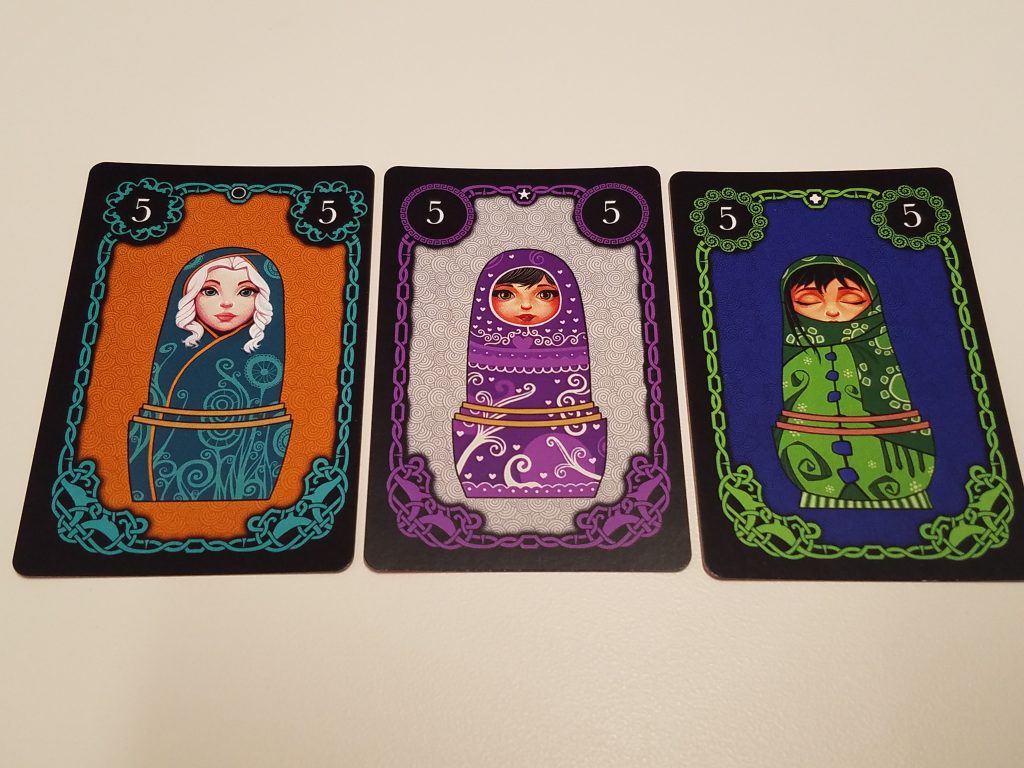 Of course, here’s where the calculus of Matryoshka really takes off – as the game goes on, you’ll theoretically have more and more information about what your rivals are looking for.  You’ll also be forced to give out the same amount of information.  Of course, you could avoid putting down cards you were actively seeking in an attempt to throw off your fellow doll collectors, but remember – the cards in your hand are the ones you must consider when making trades, so it is entirely possible that, by holding back cards to avoid tipping your hand, you might find yourself in the position of having to trade one or more of those cards away.

At the end of the 4th round, players will (nearly) empty their hands into their display, and that’s when final scoring takes place.  In Matryoshka, points are awarded to players based on consecutive runs of cards, as well as for sets of cards.  By laying your cards out in a grid, you can quickly assess your scoring and determine a winner!

As far as Matryoshka‘s strengths, we found that the aesthetics were high on the list.  The game looks fantastic, and we are sure that the new printing will be even better – enhanced colors and better differentiation between the suits will be a welcome addition to this already pretty game.  We also found that, once we were in the flow of the game, the rules for asdf were quite intuitive, and the game’s relatively short length meant that you could really focus on the turn-by-turn trading puzzle that it represented.  We also thought the display, in how it provided an ever-expanding pool of information, was a really interesting design choice, standing in for what would otherwise be a reliance on card-counting and memory. 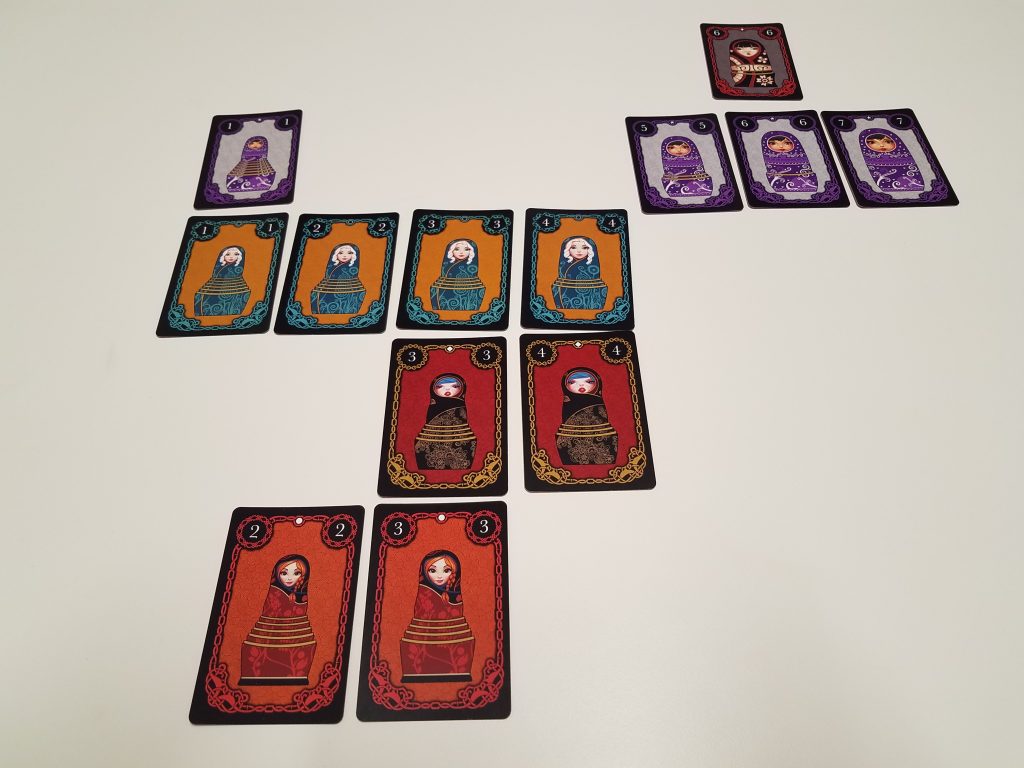 On the other hand, once we played a few hands of Matryoshka, we felt like we had seen everything the game had to offer, mechanically.  The only difference with more players is that there are more turn-by-turn calculations you will need to do to determine what trades are more beneficial to you than they are to your opponents – and those displays will turn this tiny-boxed card game into a real table-hog by round 4.  And the player count, from 3-5, means that it won’t hit the table for gamer pairs, something that other abstract card games tend to be really good for. 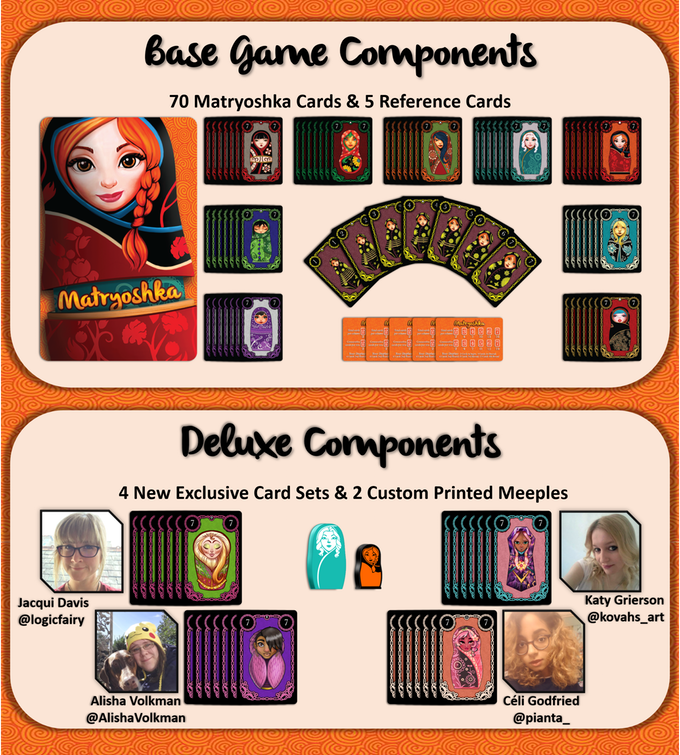 Where Matryoshka shines is when people get into the spirit of the trading.  Bantering over good deals, trash talking bad ones, and embracing the spirit of the game can add delicious spice to the experience.  It’s not that Matryoshka is flavorless to begin with, but it does benefit from player interaction beyond what is required by the rules of the game.

Ultimately, whether Matryoshka is for you will depend on what sort of an experience you are looking for when you come to the table, and so we highly recommend checking out the Kickstarter and seeing for yourself!